Rancilio Silvia powered on but no heat

My Silvia is about 2.5 yrs old. I just got the parts to overhaul the steam valve. This morning, in the middle of steaming milk, it just stopped heating. The panel lights are on, boiler full, pump works, but the water stays at room temperature. It seems kind of young to be losing its element, and there hasn't been any really hard use to explain a major failure (once a day, usually, on for about an hour). Anybody know what might be wrong?

Is there a source of diagnostic information online for the Silvia electrical system?
Top

Sounds like you tripped the safety thermostat. Look for a little red button on a thermostat similar to the one shown here or Figure 3 on Murph's Silvia PID page. Let it cool down, unplug it, find the safety thermostat, and press the red button until you hear a click. It happens from time-to-time (searching the web, I find that I answered this question the first time almost four years ago here).

PS: If you have it open, would you post a good picture of the safety thermostat for the next person who asks? Thanks!
Dan Kehn
Top 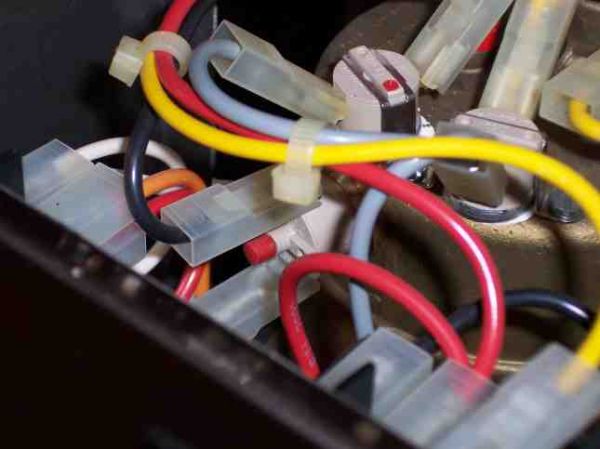 Here is the image of the safety thermostat. Unfortunately, it doesn't appear to be tripped (button is solidly "in").
Top

So, what is the next probable cause if it's not the safety thermostat?
Top

Since you said it died while you were steaming, this probably rules out the brew thermostat since it gets bypassed when the steam switch is on.

Steam tstat is on top, right side, closest to the OPV.

Unfortunately, it will not heat in brew or steam cycle. The t'stats all appear to have continuity through them. I unplugged the coil leads (as nearly as I can tell, the two red insulated pass-throughs on top of the boiler) and the ohmmeter appears to show an open circuit between them.
Top

You should read around 16 ohms across the heater coil terminals on a 110V Silvia. If you have a completely open circuit, then your heater is probably shot. Sorry.

BTW, although I don't think this applies to the problem with your machine, a Silvia will not heat in either steam or brew mode if the steam tstat is open.

Dissappointing, to say the least.

Whereas my original boiler appears to be cast in one piece, the photo of the replacement boiler from 1st-line looks like a cheap can built-up from sheet metal:
http://www.1st-line.net/cgi-bin/categor ... type=store

Anybody have a recommendation for factory-new OEM parts for the Silvia?
Top

JJR2 wrote:Anybody have a recommendation for factory-new OEM parts for the Silvia?

I wonder if the picture that 1st-line has is out of date, mine does not look like that either. Would be worth a call to ask.

I have a spare boiler that came from espressotec, the previous owner of my Silvia machine had purchased it. They are in British Columbia, so I don't know how much that might complicate the sale and shipping. They have the price and pic here: http://www.espressotec.com/umpartsRancilio.asp

Another source that you might try would be a call to the folks at http://www.partsguru.com
Jeff Sawdy
Top

It's becoming clear that the "tin can" boiler is the new, and apparently the only replacement for the Silvia boiler now available. If you have the misfortune to own a Silvia with a burned-out heating element made before the "new and improved" current version (mine is from 2004), as of January, 2007, you're just out of luck---the "new" part won't fit.

I've been told that Rancilio may condescend to make an adapter available for the new boiler sometime this Summer. 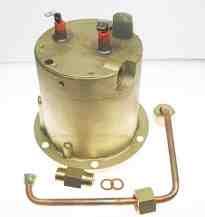