I just got a Rancilio S27 as initially described in this post:

I've attached photos. I'm new to espresso machines, and appliances in general, please tell me anything of note that you see.

It looked like a horror to me last night when I brought it home and opened it up. I hope I was mistaken. It's looking a bit better to me now that I've learned a bit more and can name some parts. But there's quite a bit of rust on many of the electrical connections (such as capacitor in top view photo) that I don't know what to make of. Plus some fraying of the fabric around some wire ends. Also it seems there must be flakes of paint and rust fallen down into the motor, not sure if that would be an issue or not.

From what you see does it make sense to attach water, plug in, and see if it turns on? Or should it really be restored and checked from the ground up first? I do plan to restore from ground up (with help of someone who actually knows electronics), I'm just wondering if it would hurt anything to give it a try first. 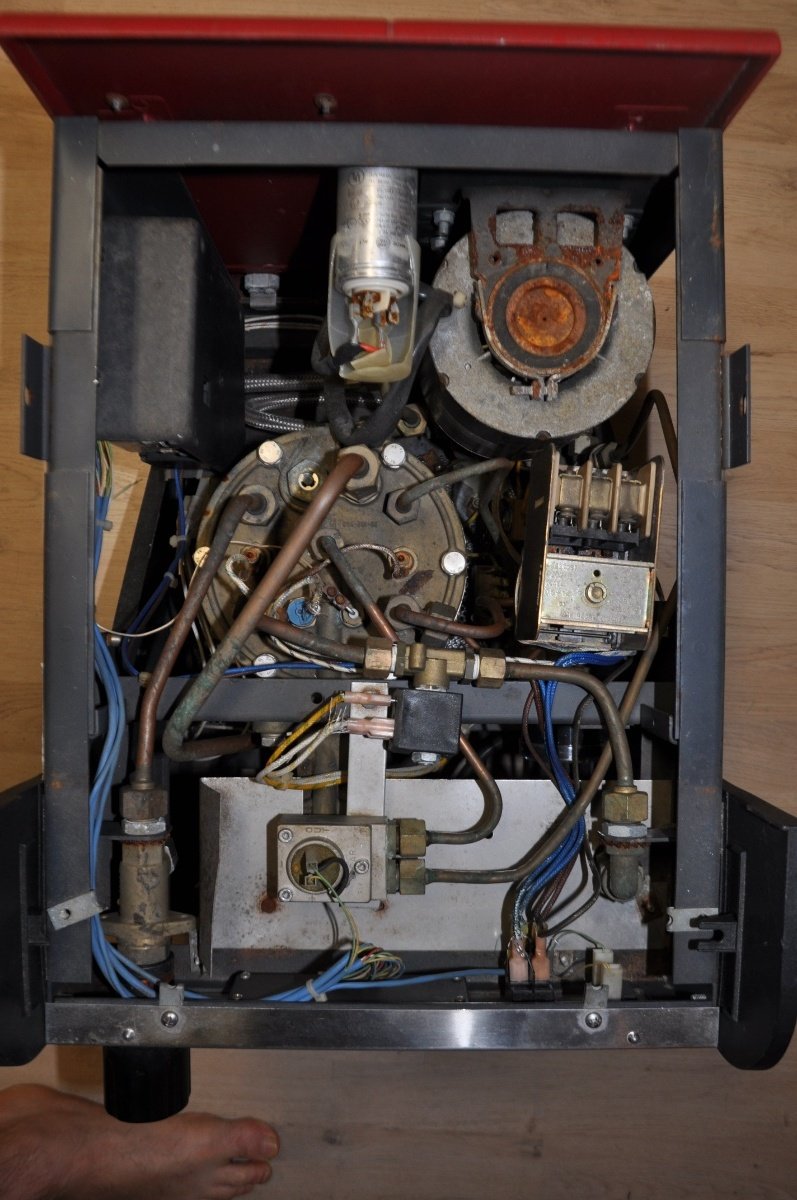 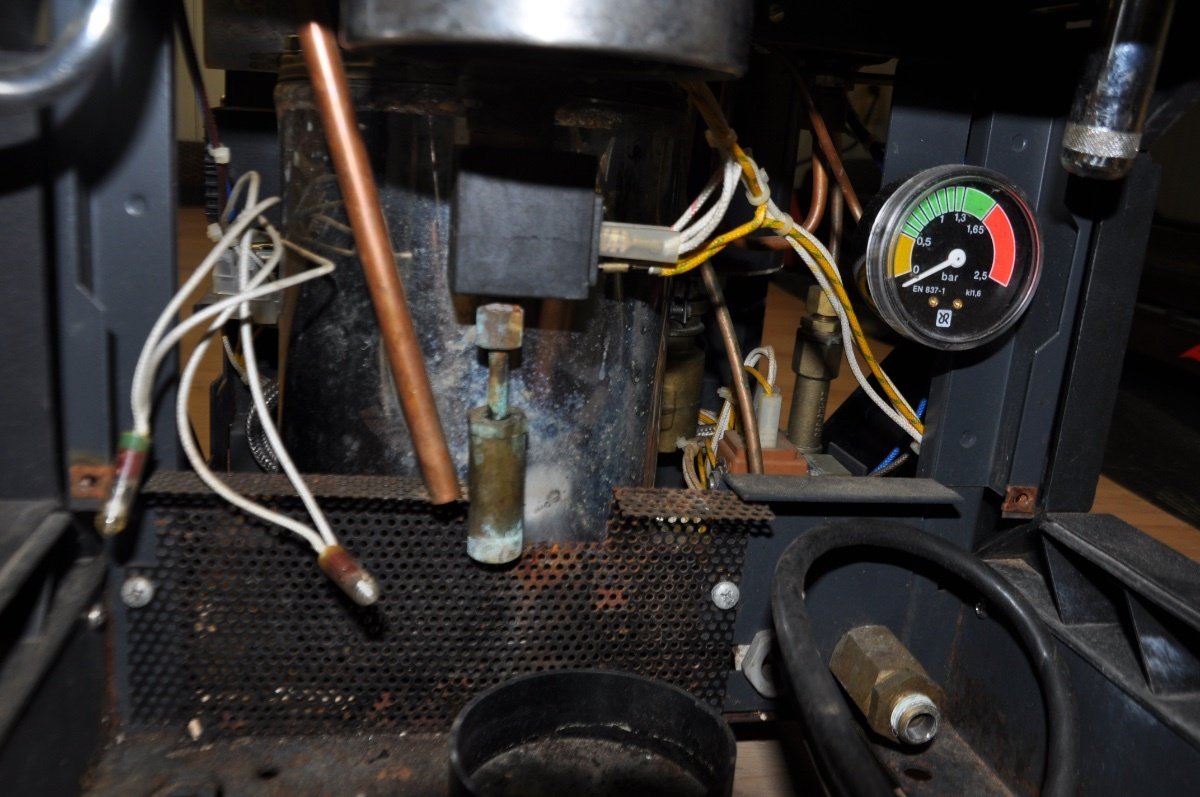 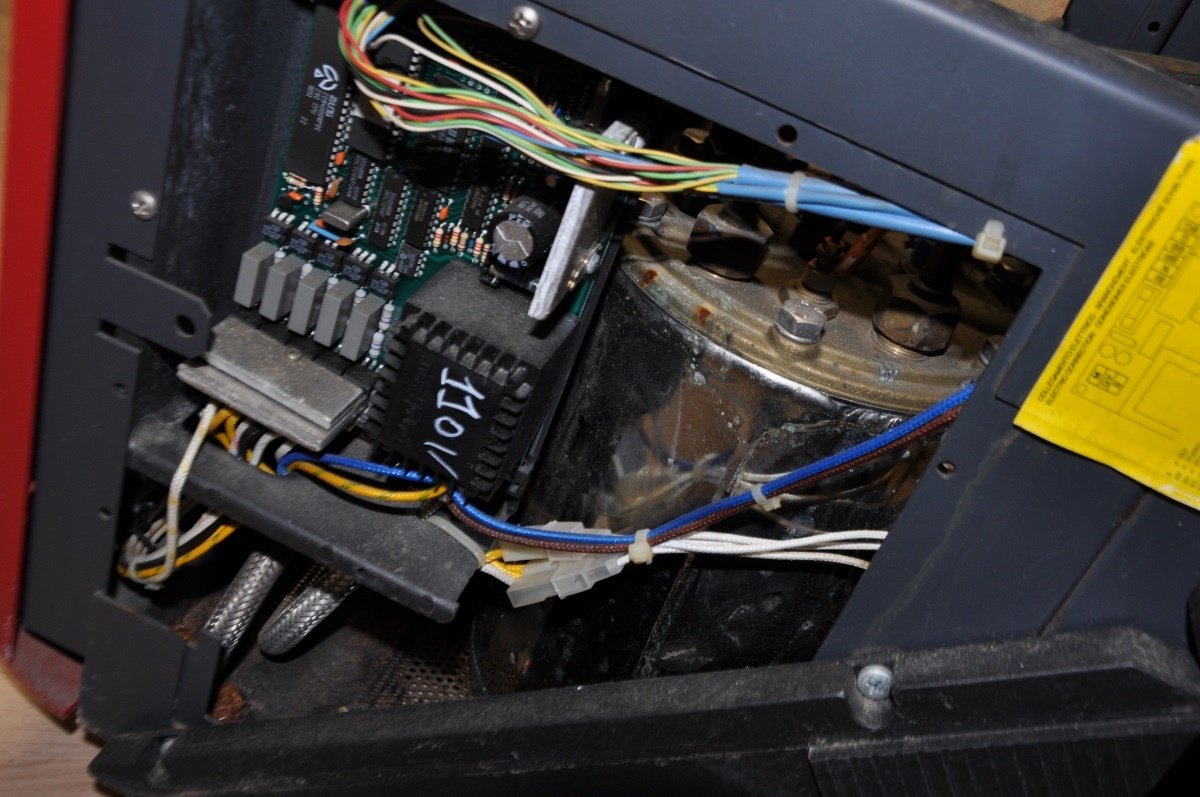 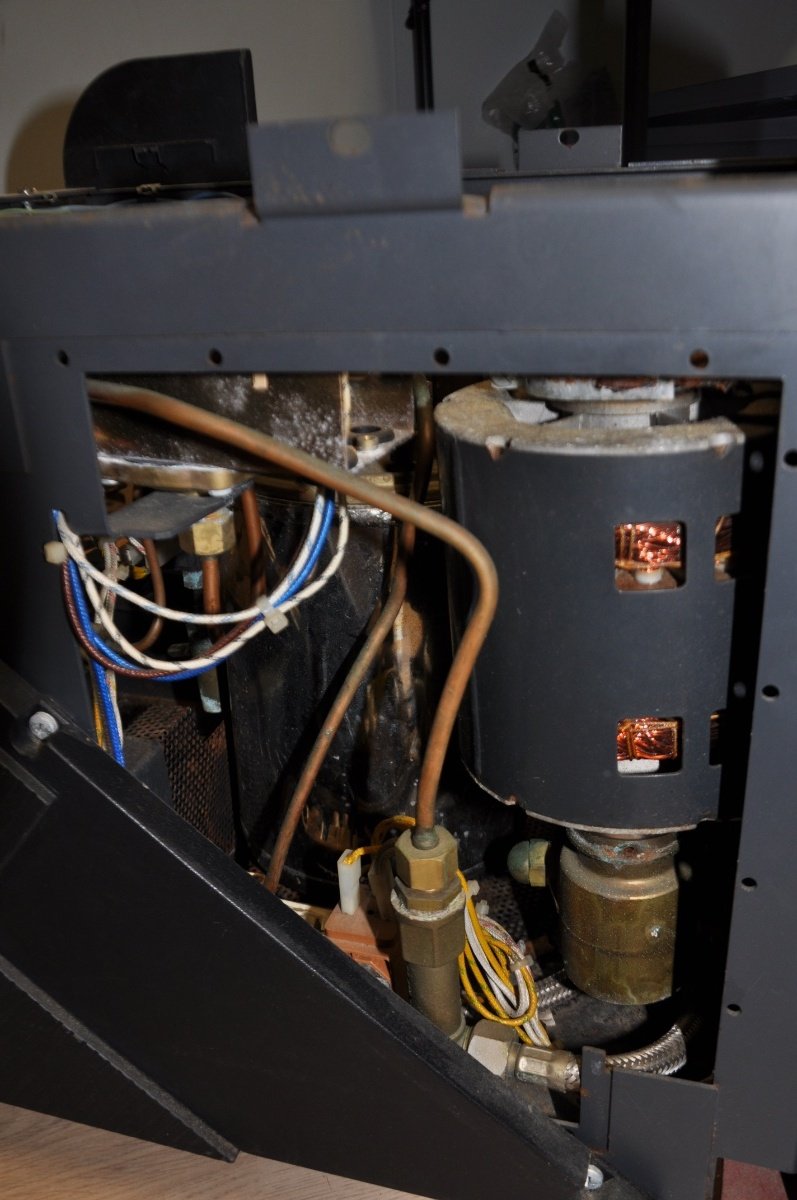 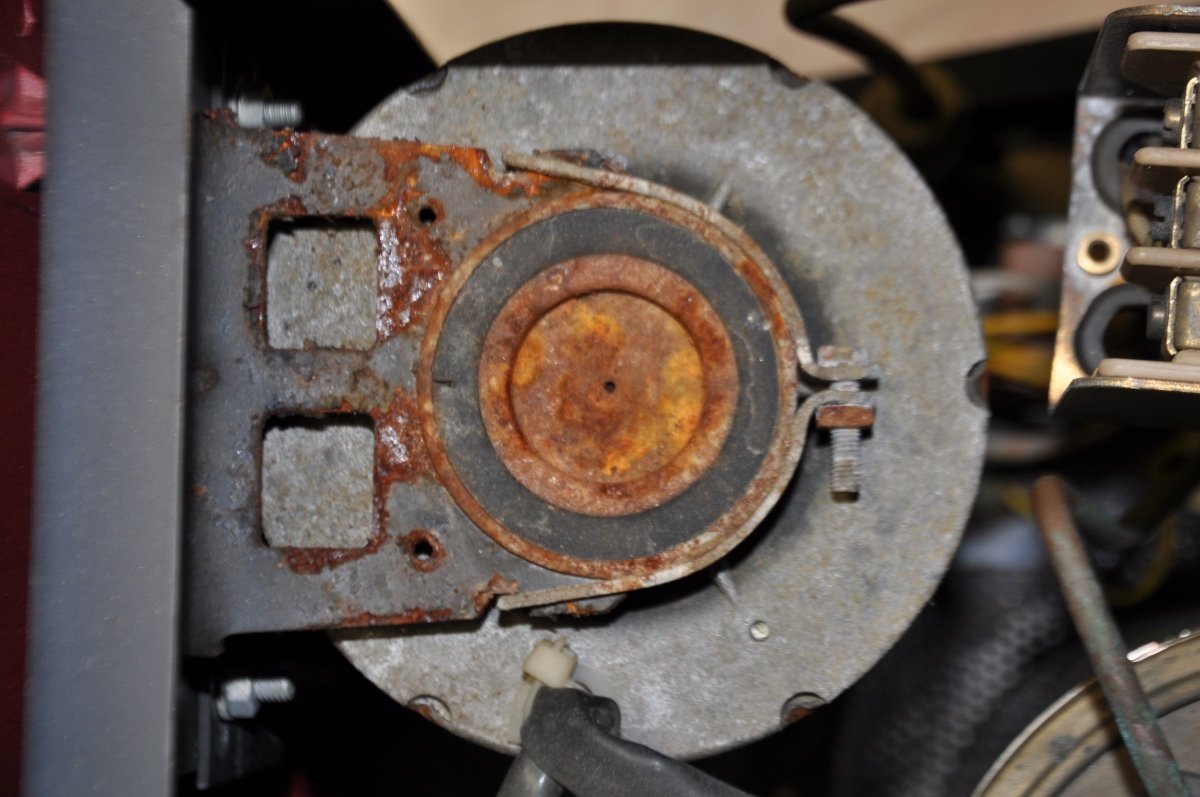 Yeah, you might learn something from plugging it into water and electricity and see what turns on. I doubt I'd jump to making an espresso though even if everything was in order. I'd want to give all the water lines a good soak in citric acid solution first. There's bound to be gunk after 10 years of sitting that I wouldn't want to pass along the line.

But nice! It actually doesn't look as bad as at first glance!
Top

Plugged in, here's what I found:

First I connected water: I used a wine bucket (with valve in bottom) on a table for water source, and connected to machines water input. I thought this would begin to fill the boiler... but there was back pressure, so no water ever flowed into the machine. Is this expected? I guess now that maybe it is, because the pump is in the way... maybe water can only be pulled into machine by pump, not pushed by pressure?

Second I connected power: Plugged machine in. Turned on switch. After a half second heard click and then heard boiler heater turn on (I think that's what the sound is). But pump motor never turns on. On some s20 machines there is a tri-switch separate options to turn on pump and boiler. But on my machine it's just a single switch that does both I think, so unexpected that motor doesn't turn on.

My electronics experts have left for the day, so I'm done for now. Suggestions on next step welcome. Without anything specific I was told to find wiring diagram and use that to start debugging problem.
Top

At this "let's just see" experimental stage, disconnect the heating element(s) before connecting to a power source. If the boiler is dry, those things will quickly turn into a crisply critter.
Richard J. Wyble
Top

Your front view shows i thinl the outlet of the threeway valve that releases pressure when the pump shot is finished. A small amount of water comes out of that and goes into the drip tray ( which you have removed?). I would not worry about the scale on that, although you could clean it up.

I am not an expert on rotary pump machines, but if the boiler already has an adequate amount of water in it, i would not expect the motor to come on. However, regardless of whther or not the boiler is up to temp, you should be able to test the pump motor by trying to pull a shot. This is a heat exchange machine, which means the flow to the grouphead is independent of the boiler.
Top

I tried a next step today.

Yesterday I was using a bucket on a table for water supply. No water ever entered the machine even though there was some pressure. This time I connected a garden hose just barely turned on and I could hear water going into the boiler. I left the machine off and unplugged. Water continued to go into the boiler. And then water started to bubble out of the boiler from this point: 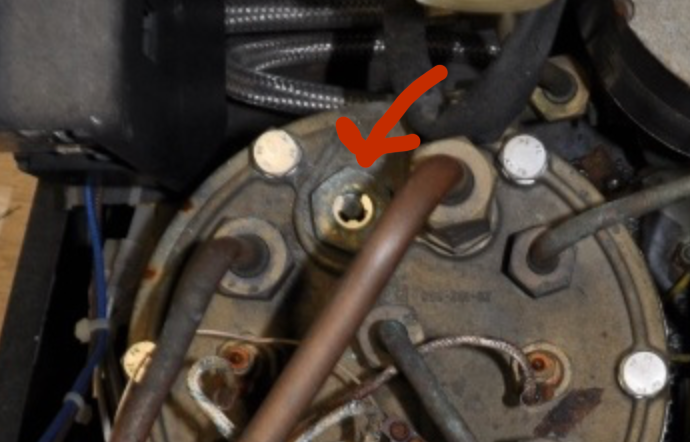 I guess I must be doing something wrong!

I think connecting the hose is the same as the first step right? I never did the second step because I was looking around for leaks and such before I plugged it in. Should I have turned on the main switch immediately, and would that have avoided the leaking out of the top of the boiler problem? And what should I do now, that I guess I have an overfilled boiler?
Top

It will come out of there when the pressure is low and I'm guessing you overfilled the boiler so much it reached that and started coming out.

You should probably open the steam valve all the way and then turn on the machine and see if it heats up. Until you get the water level back down you should leave the steam valve open to relieve pressure, or the hot water valve which pulls from the bottom and might empty the boiler if you don't pay attention.

There is a procedure in the manual.for draining the boiler.

So, your level probes could have lots of scale on them preventing them from "detecting" the level. That is likely, and you should try to descale. Others can tell you what solution to use, and how to get it into the boiler without taking it apart. You might need to remove the level probes and clean them . If it's not the probes, then perhaps the valve is stuck open. If that's the case, the boiler would overfill i think without the power on. If the level probes are working, then worst case the controller is not switching the valve off.

I surmise that with this plumbed in machines, the pump only pushes water through the heat exchange tube, and the boiler is filled through the water pressure.

So, descale, clean the probes, and try again.
Top

This value is external to the machine? From what I can tell the manual is talking about a user installed valve external to the machine. But this surprises me quite a bit. For example don't some people leave machine on all the time? In that case they would leave the water valve open all the time too? And then what happens if the power goes out? I guess maybe the answer is that people are using some bigger system like a flowjet that doesn't push water when power is out?
Top

ira wrote:It will come out of there when the pressure is low and I'm guessing you overfilled the boiler so much it reached that and started coming out.

Yes, I'm pretty sure this is what happened.


ira wrote:You should probably open the steam valve all the way and then turn on the machine and see if it heats up. Until you get the water level back down you should leave the steam valve open to relieve pressure, or the hot water valve which pulls from the bottom and might empty the boiler if you don't pay attention.

I think the manual says to empty the boiler I should turn on machine and then activate the hot water dispenser. Unfortunately now when I turn on the machine nothing happens. Previously when I turned on the machine I would:

1. Hear solenoid click
2. Hear what I think was heater turn on

Now I don't hear anything when turning it on. I can't be sure, but I may have heard a slight electrical sound when I tried to turn on the first time, maybe a short, but I don't have much experience to say that definitively. Anyway now nothing

. Let me know if there's something easy I should do next. Otherwise I think I'll spend some time reading a bit more about how to debug electronics.

Will it hurt to leave the boiler in this completely full state for a while?
Top
← Back •
By accessing this site, you agree to the site's terms of service. If you need help with the site, please contact us.