mini wrote:the springs are not compressed until after the collar starts threading.

mini wrote:Anyone else's SJ like this, or am I just lucky?

My Robur is the same.
Top

I'm still not sure if I'm having a problem or not so I took a couple of pictures. 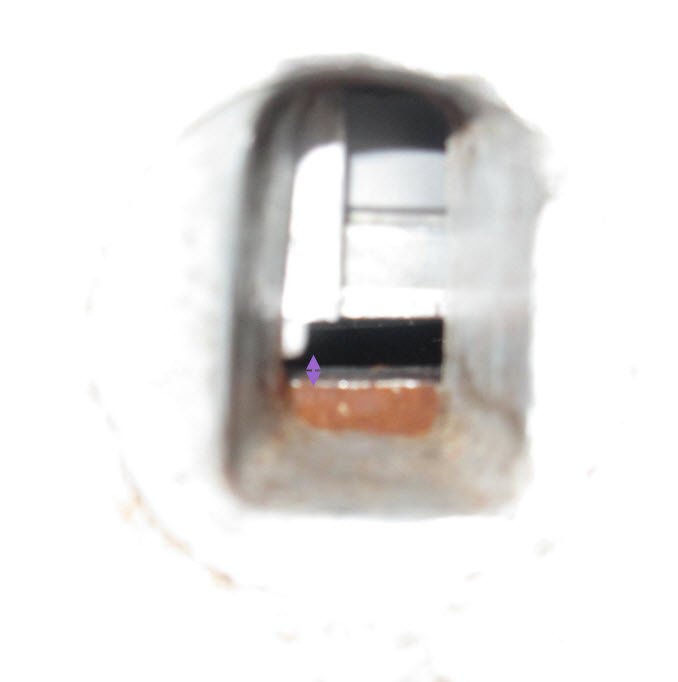 This picture shows the collar threaded and almost completely tightened down to where the upper and lower burrs touch. Is there too great of a distance here? 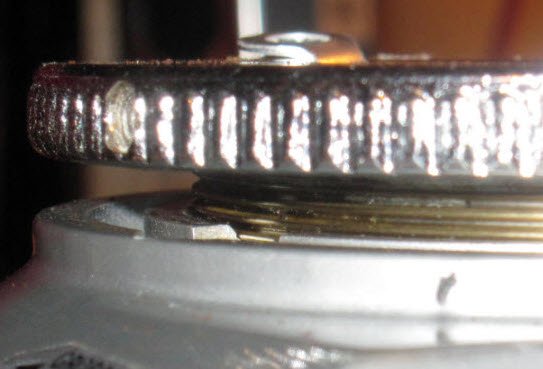 In short, I think yours is fine.

But, I'm a bit confused by your picture, and I'm not completely sure what the arrow is referring to.

So here are pictures of my machine set for espresso, which will hopefully clear things up (or put your mind at ease). I've never taken off the lower burr carrier, and I really doubt the previous owner did, so you can safely assume this is normal... 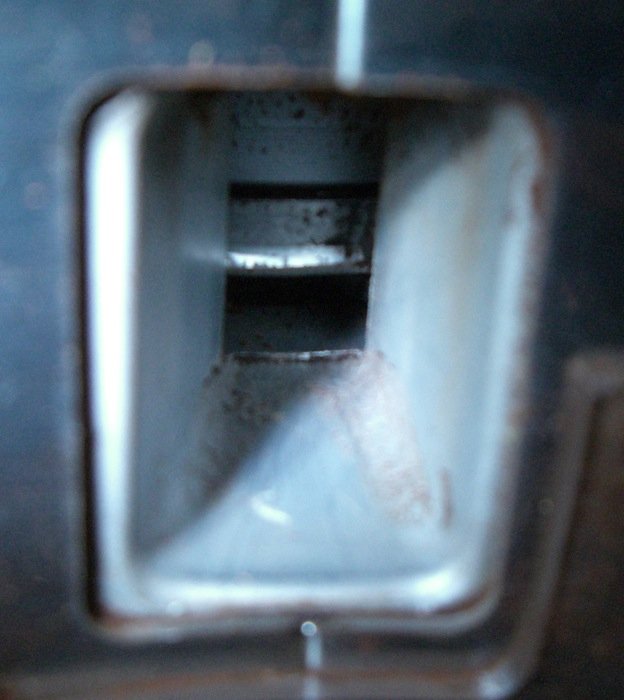 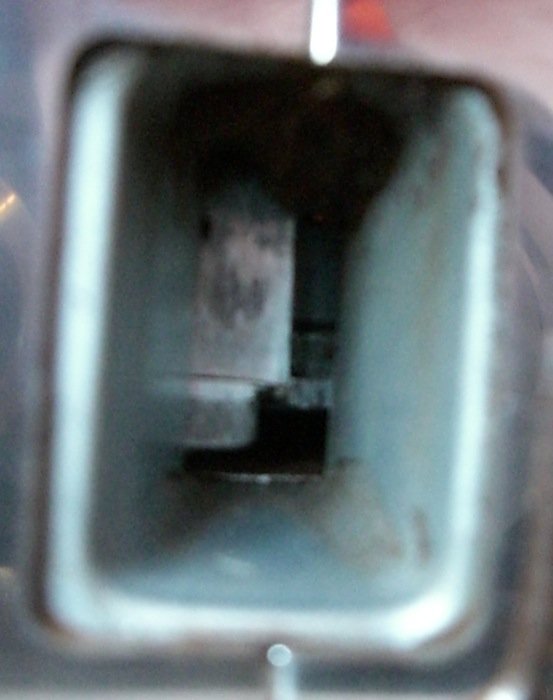 Here is roughly the same shot with one of the three vanes in the frame. Still some distance between the lowest portion of the vane and the bottom of the chute. I think this is what was worrying you? 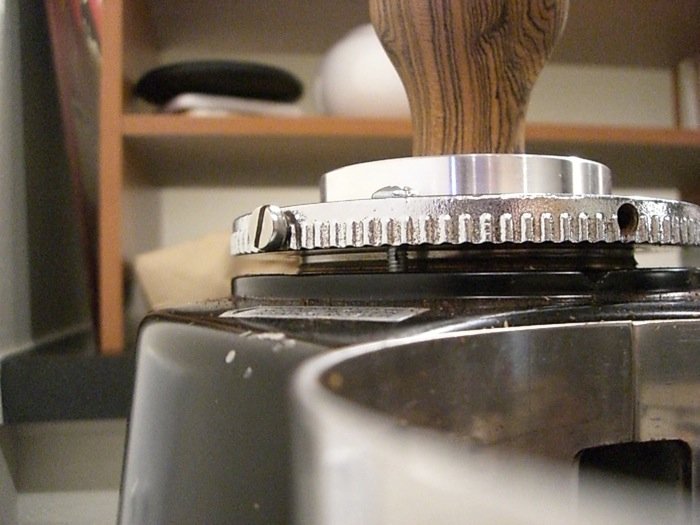 Hope that helps! I know how bothersome it can be to feel like your equipment is messed up.

P.S. Your picture looked blurry until I tried to take some of my own! It's not easy to get a camera into your doser, is it?
matt
Top

Thanks for your post and attached pictures. It looks like the spacing on my SJ is very similar which sets my mind at ease.

I took over a dozen pictures and only found a couple that came out half way decent.

No problem. Procrastinating and thinking about Super Jollys was way more fun than reading the assignment for my college Health class, anyways.

I think I understand what you were measuring now too.
matt
Top

I have to admit the reason I thought there was an issue was due to the grinder not behaving properly (beans were accumulating and not being ground and ejected from the chute). I then remembered that when I took out the switch to clean it, I may have not put the black and white leads on the correct posts. I reversed the wires and now its working like it should.

Once I felt I had the lower burr carrier on, I added the upper burr carrier and as mentioned above it can be tricky. I ultimately won that battle and got it screwed on.

Is there any trick to make sure that the burr carrier is properly seated? The grind seemed powdery at the setting a touch above where the burrs touch. I'm also afraid that if its not properly seated my grind quality will be seriously compromised.

I know I'm reviving an old topic, but I've just experienced this exact same thing on my Mini E. I bought the grinder used and wanted to take it apart for a thorough cleaning. I used the 3-screw method for removing the lower burr carrier, and after scouring the thing, I placed the carrier back on the shaft. I took care in seating it according to the shaft pin, screwed the center bolt in, and all seemed fine after a quick visual inspection and actual test...no rubbing, squeaking, or anything out of the ordinary. However, when I put the top burr assembly back on, I checked the zero-point, and noticed that it had shifted significantly...instead of being at (or near) "0" on the adjustment collar, it was now around 7.5, and the reference sticker was now toward the back of the grinder.

Oddly enough, it still seems to be grinding ok. Although, just like Mike, I couldn't help but notice how high the carrier is sitting off the chamber floor (I noticed it too when looking in through the chute). Consequently, the adjustment collar also seems to be sitting abnormally high, as my dialed-in grind is now somewhere around 8.5, when it was round 1.5 before.

As I always do, I searched the forum for answers; I found this thread and I'm a firm believer that somehow, I've raised the entire motor assembly out of the bearings a bit. I'm considering trying coffeemelon's solution, but I'm a little uncomfortable hammering anything other than a nail (or anything that I'm not intentionally trying to break for that matter). Any suggestions?

If you are going to try what was suggested in the post you linked to I have a better idea then wacking the bolt head with a hammer. Since the bolt is located down in the burr chamber you could easily hit the bolt off center & end up bending the end of the rotor shaft. I'd suggest placing a 1/4" punch/drift dead center on the bolt head & tap on the end of the punch with the hammer instead of hitting the shaft directly.
LMWDP 267
Top

I was kinda thinking along the same lines as you, John; thanks for the suggestion

I was going to use a small block of wood on top of the bolt. I should've been more clear that I never intended to hit directly on it. Still though, will this make it possible to accomplish what I'm looking to do, or do I risk screwing something up (or perhaps even knocking it down too far)? Aside from the more user-accessible parts on this grinder, I'm not too familiar as to how everything is arranged under the hood.
Top

If you remove the bottom cover & look up inside you will see the bottom bearing carrier/cover that the rotor sits in. If you were to hit the top of the rotor shaft hard enough you could damage the carrier &/or the lower bearing. It's been a while since I've had the rotor assy. out of an SJ or Major so I don't recall if the shaft has a shoulder that seats against the upper bearing that would prevent what you think might have happened.

Another option would be to slip a piece of pipe over the shaft and tap on that so you would be hitting the flat burr carrier instead of the shaft. Since the burr carrier sits on a roll pin in the rotor shaft this would reseat the shaft to the correct position if it has indeed moved up without risking damage to the shaft.

FYI - On my 2006 Super Jolly which has never had the burr carrier removed there is a 5mm gap between the burr chamber floor & the bottom of the burr carrier.
LMWDP 267
Top
← Back •
By accessing this site, you agree to the site's terms of service. If you need help with the site, please contact us.