I thought I would share the conversion of my Lelit Mara PL62T into a HX profiling machine. I have had the Bianca profiling valve for some time now and I have been very pleased with the modification. I have also made some additional changes to improve the aesthetics and the overall function of the machine. Most notably is that my Mara has both grouphead temperature and pressure indication.

If you are interested in the original thread where the valve was first installed, and the journey began, you can find that here.
Who wants to Bianca-fy their E61 grouphead? - Interest Survey 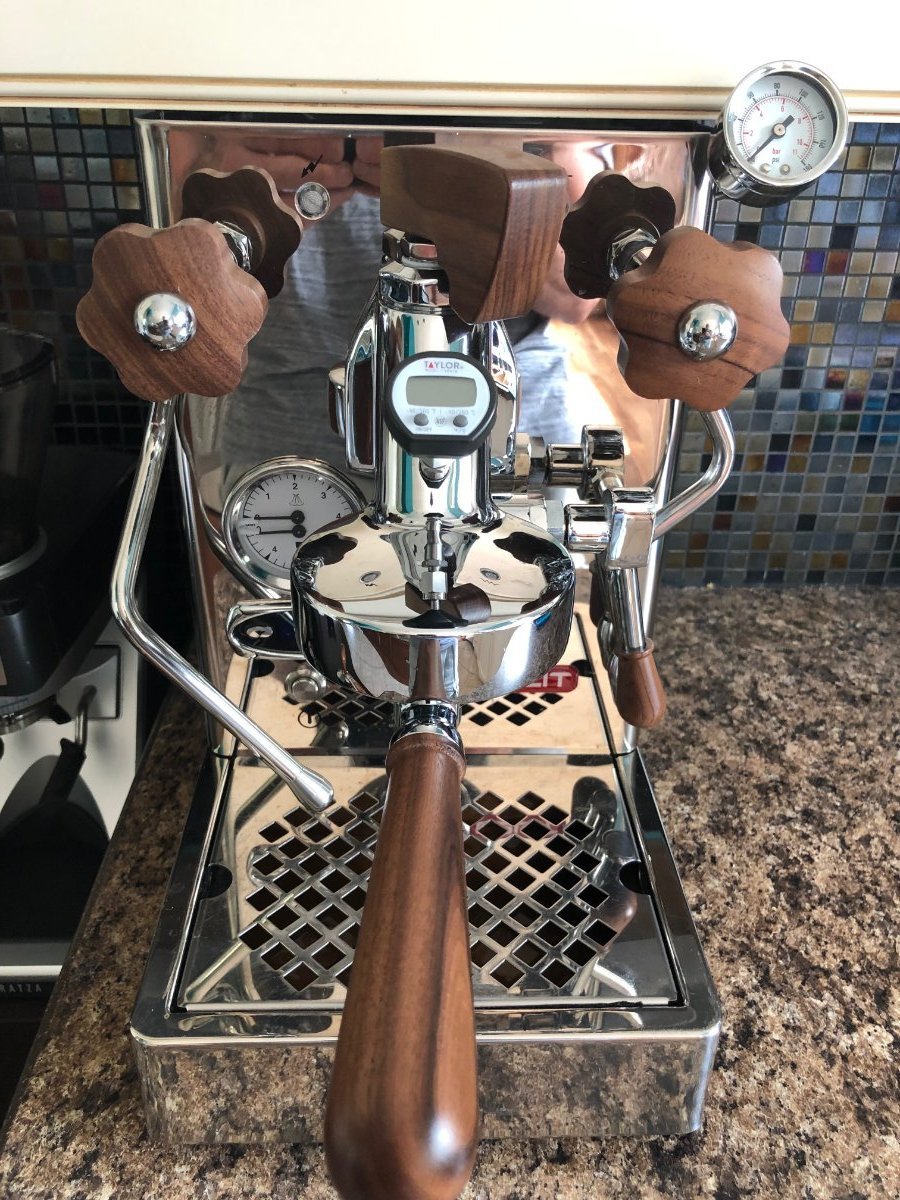 Overall, I have found the valve very easy to use and it has certainly added to the pleasure and adventure of making espresso. I would recomend that anyone considering this modification, first develop competence in making espresso with their E61 machine before adding the profiling valve. It does add another variable into the equation.

The Bianca dispersion screen is a finer mesh than the Mara so I added this to help with water distribution over the puck. I can't compare it to say the LMS screen but at $22 Can it is a cost effective upgrade even if it is only a minor improvement.

In the cup:
At first, I did not install the lower drain valve spring, retaining the standard E61 preinfusion. This allowed me to run the valve as open as I wanted, and pull standard E61 shots. When I desired, I took over with the valve. My wife and I enjoy our coffee differently so I can easily make her a standard shot in a milk drink and then do a long preinfusion pull for myself. I have since installed the spring and I am using the valve to influence every shot.

I have been regularly pulling light to medium roasts with a 30-45 second preinfusion of 2-3 bar. I have found that I can get flavours that I couldn't get previously and maybe more importantly I can produce a result that I find very smooth on the palate. Lovely!!

As a side benefit, and this may be cause for conversation, but I have felt that using the valve has added some grace to my grinding. Firstly, now I can grind fine enough to choke the machine (but a long preinfusuion takes care of that) but I haven't had to shoot for perfection with my grinding. The grind can now be super fine but I can get similar results from a broader grind range than I could previously using a standard E61 shot profile.

So what about temperature control (its an HX):
I have found that I generally experience a slightly inclining temperature profile over the course of a shot but generally not much more than a 1-1.5*F. Like with any HX machine you need to learn how it reacts to flushing, how much to flush etc. I think, in really low flow situations the heavy mass of the group itself helps stabilize the temperature. Setting your boiler temp a bit lower (PID versions) can also help, but I haven't found it necessary. Long and short of it is that it has not been an issue for me.

That all being said, I was faced with not being able to know the temp and pressure at the puck simultaneously. Temperature was not a concern because I had Eric's Thermometer installed already. This has been a concern of many on HB and perhaps my modification can be a solution for some that are willing to make a physical alteration.

Grouphead Alteration:
I removed the E61 grouped from the machine and drilled a port in the backside where it is unseen. The port connects with the cam chamber internally and the port is tapped 5/16" 24 for the fitting. The 1/8" Swagelok fitting (SS-200-1-2ST) is bored through with a 1/8" drill so that I could choose either pressure indication or temperature indication (with a 1/8" K type thermocouple) from this port. I used a copper washer as the sealing medium between the fitting and the group. I could have also used fitting (SS-200-1-OR) which uses an oring as the seal. Spot facing the port for the seal is recommended, however I personally did not and then had to draw file the area which removed some of the chrome (still completely unseen to the eye). I used 1/8 stainless tubing to connect to my gauge externally but how you chose to connect the port for a pressure gauge is really up to the user. The Mara is quite a compact machine so there isn't much room on the face to add a gauge into the face panel. I would think on larger units there would be room to flush-mount a 1.5" back mount gauge. 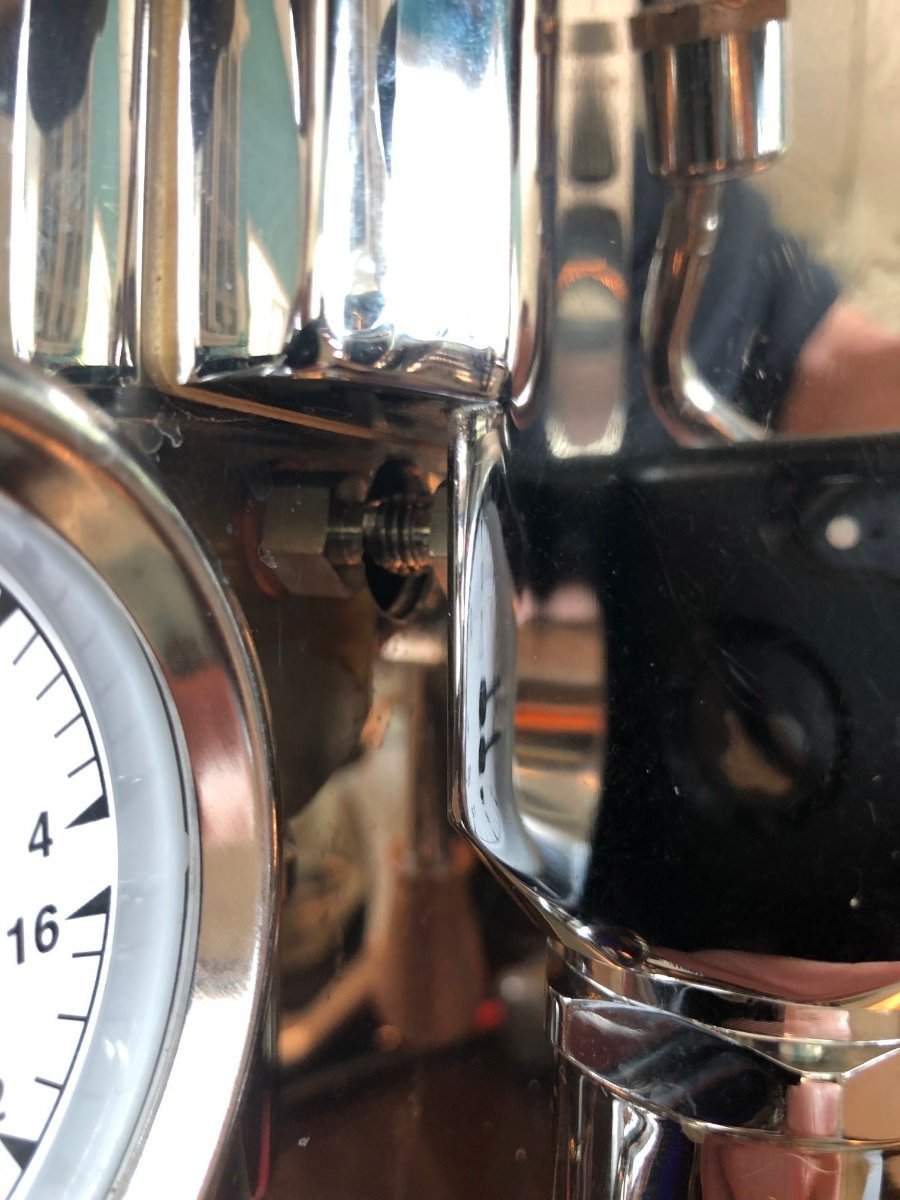 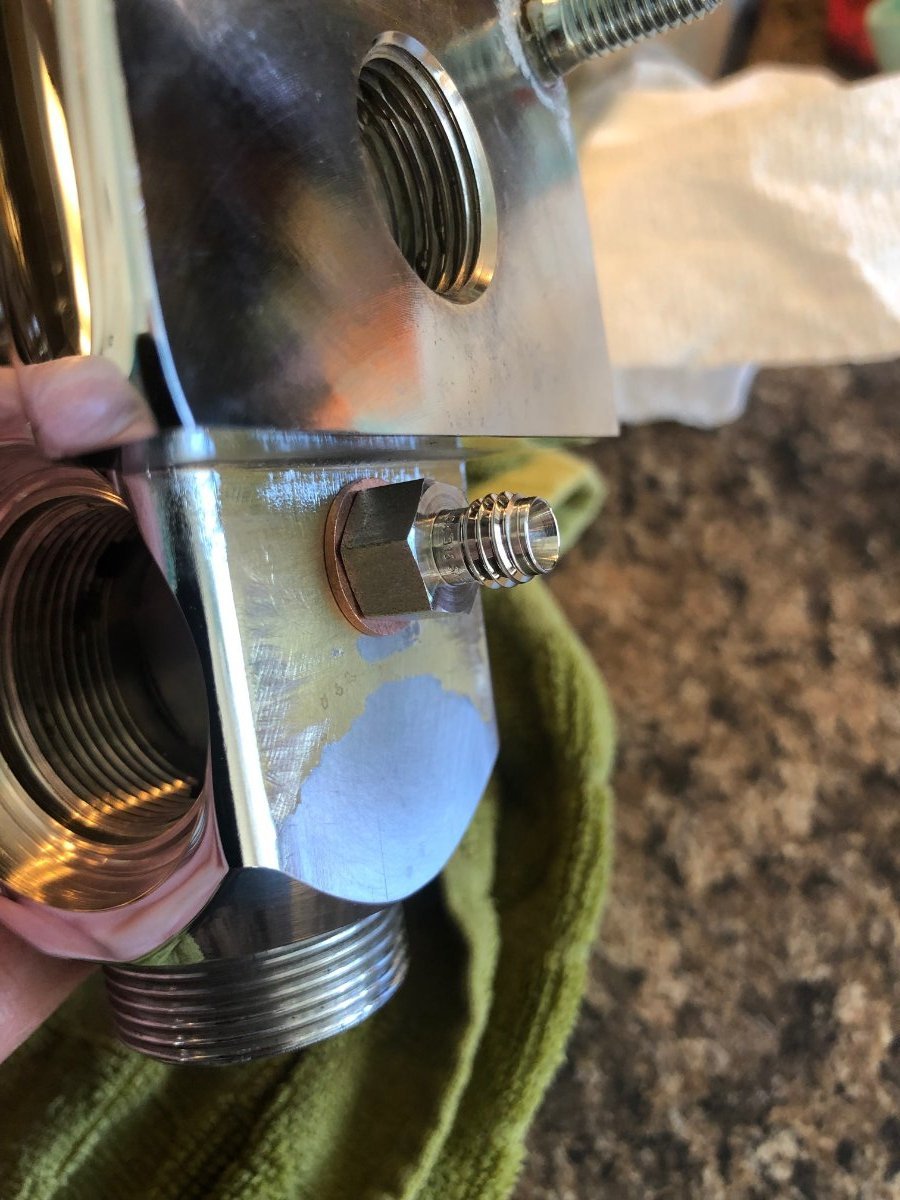 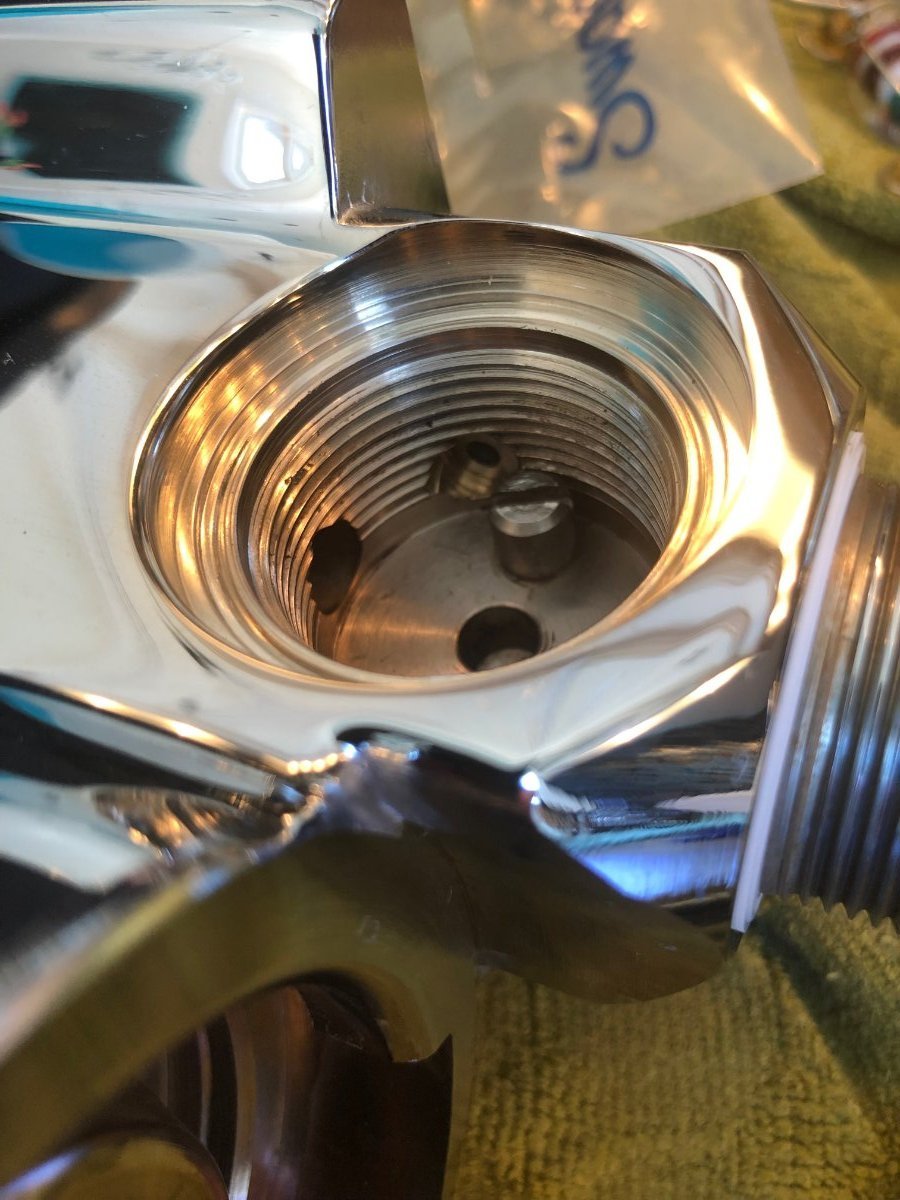 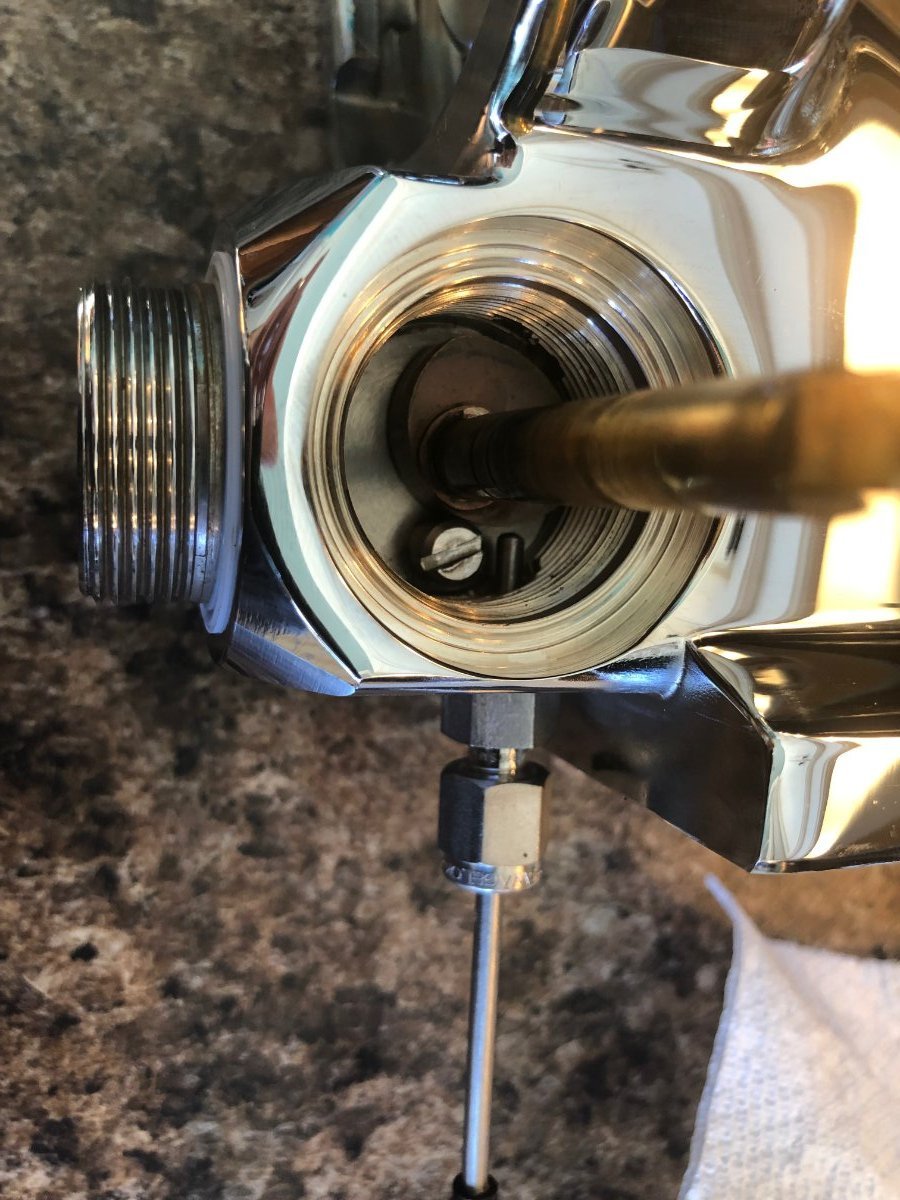 Pressure:
I was very please to find that the pressure indicated at both locations were identical. This makes sense as both ports are in the same leg of the hydraulic circuit. I expected there to be some lag in one compared to the other but found them very close. The gauge pressure on the custom port actually responded a bit quicker than the grouphead manometer but that could just be due to differences in the gauge internals.

Temperature:
Again, I was pleased to find that the temperature at both locations correlated very well. I used Eric's thermometer in the stock grouphead location and 1/8" K type TC in the custom location using my digital multimeter. I compared the two in standing 200*F water to first understand the temperature differential and then remove that differential from the equation and test. At an idle the two ports read almost identical. During a flush or brew cycle the port at the cam chamber temp reacts ahead of the stock port as the water passes through this area first. This is true both as the water temp inclines or declines through a brew cycle. This temperature differential was pretty consistent at 2-3*F. Keep in mind that I did not perform extensive testing and say a really hot or cold group idle temp might influence the differential.

It is my opinion that the custom port is more suitable to pressure indication than temperature. It will work with temperature but a suitable small digital display would need to be identified and then some offset would need to be considered into the measurement. I really like the cleaner look of the Leliit manometer on the group face so I was secretly hoping for the inverse.

Will the Lelit Bianca profiling valve kit fit your E61 machine?
A little research on HB should give you the answer you are looking for. In some cases where the mushroom and cap are a single piece design you will need to order a mushroom and oring to go with it. This marketplace link hosted by 1st line will likely help you find the answer. BIANCA-fy your E61 Grouphead

Parts in Canada: (For my fellow Canucks)
In Canada, the Lelit parts here can be ordered from the Canadian Lelit importer Edika. They have a website but not a means to order the materials from it. You need to contact them directly and do it old school. It works well and the response time is good. service@edika.com

The Bianca valve kit, paddle, set screw and manometer (gauge) will set you back about $425 CAN plus tax.
Michael
Top
★★ Quite Helpful

That is exceptional work you've pulled off.

Outboarded a rotary pump this past weekend. Link Outboarding a pump

Things of note:
I abused the original vibe pump for months and it never missed a beat. For those thinking it might not stand up in this service.

I measured the flow rate after the rotary pump install with the paddle all the way right (left is closed). Flow rate is now 6ml/s, just like the Bianca and up from 4.5ml/s of the original Mara vibe pump (Ulka EP5).
Michael
Top

I'm late to this thread.. but have a question about adding your pressure sensor to your HX.. as I have a Profitec HX and might like to look into the pressure-flow profiling mod.. However, I don't want to remove the group thermometer.

You drilled the group to get a port where you could measure pressure.. could you attach this to a separate pressure gauge like that on Profitec's front panel. Seems a shame that the pressure gauge on all these machines is not that useful.. I'm not sure how these pressure gauges there work.

Or is that not a desired thing to do? Would it prevent setting the max pressure with a the blank basket when backflushing?
Top

The only downside I can think of would be the ability to set the expansion valve easily, but to my knowledge Lelit already defeats this by having a solenoid that dumps the panel gauge pressure when the pump is turned off.

I think you would be just fine capping the port that the stock gauge uses and moving the capillary tube to the fitting you put in the group...

Jakes idea could work. There is a solenoid in this circuit so you need to consider that in the design. It is activated by the lever. I added an additional gauge (Not sensor) outside the case so I have the luxury of seeing pre and post pressures across the gicleur. The one in the case serves as the pump output pressure and the one I added is the actual puck pressure. I think there is value in seeing both. This is especially true for me since I plumbed and outboarded a pump.
Michael
Top
← Back
By accessing this site, you agree to the site's terms of service. If you need help with the site, please contact us.