My recently purchased from eBay la pavoni no longer turns on. I've read through the forum and know how to test connections and fuse (I think), but should I be concerned by the brown spots on the wire casings? Are those burn marks that suggest that I need to rewire? Thanks in advance!

Summary of issue I'm troubleshooting:
Bought my machine off eBay a week ago and have been making espresso happily until yesterday morning. The gaskets are likely worn as the boiler was leaking a bit, but the machine worked and produced wonderful espresso. I had the boiler filled, the switch was on 'II' and as I was pulling a shot, the light on the power switch died and the machine began cooling down. I flipped the heat switch to 'I' and tried to turn the power to off. When I tried to power it back on, the lights flickered in the switch, but that is all the machine will do. 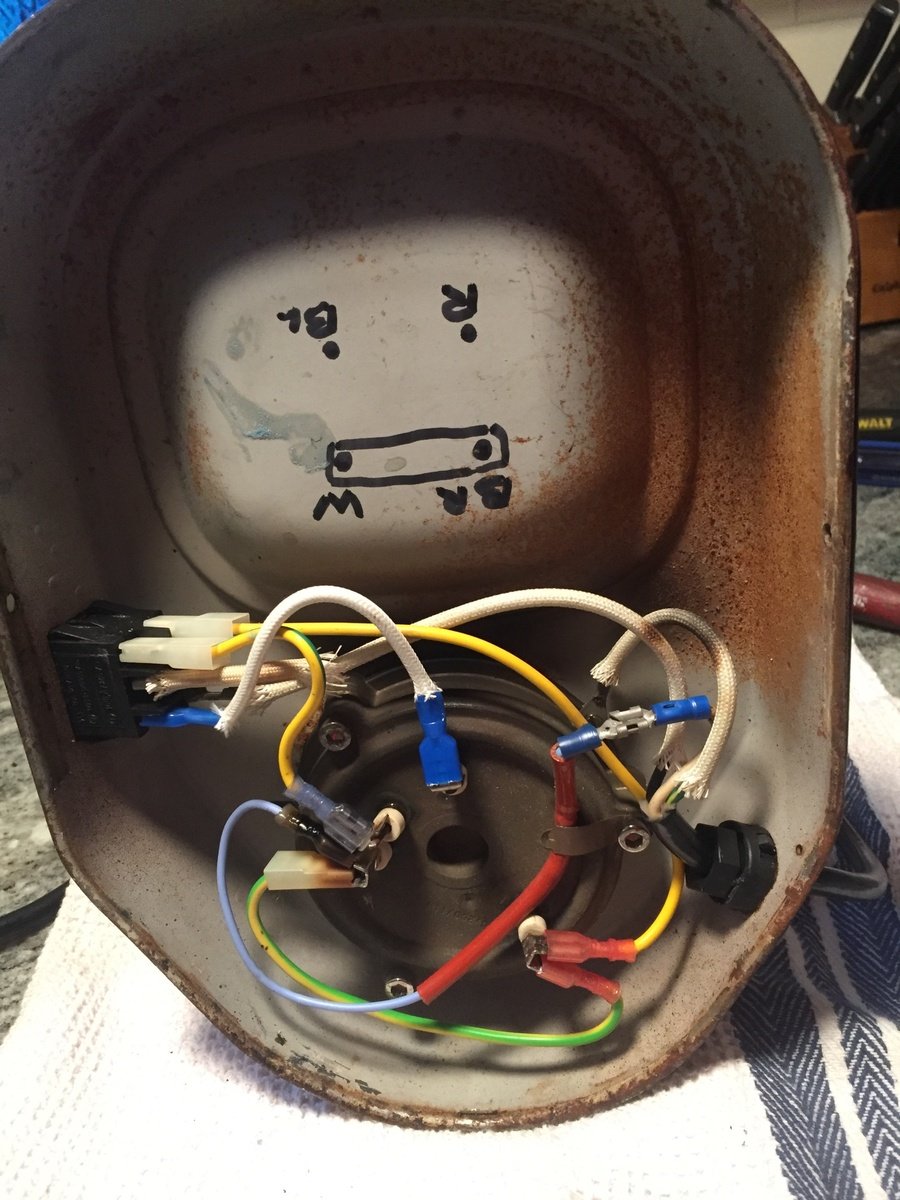 The wiring appears that it has been redone previously. I would have used a larger gauge and higher quality connectors. The overheated wires and connectors on the heating element connection indicates a high resistance connection. That could be from a loose connector or corrosion.
Espresso! My Espresso! - http://www.EspressoMyEspresso.com
LMWDP #644
Top

There are links to a couple of videos about the la Pavoni wiring in this thread:

I keep trying to follow the wiring in your picture and can't figure it out but I've never seen a La Pavoni so it's hard. All of the pink and blue crimps are not original and that blu wire looks like it's smaller than I'd want and might be the cause of the problem, possibly caused by a bad crimp at the burned connector. I'd guess the blue wire connects to a thermal fuse inside that red sleeve.

Hopefully someone who knows these machines will pop up with better answers.

I'v never seen a LP inside up before but aren't there a few too many grounding wires in there or did someone just rewire randomly choosing wire colors? I agree with Ira and Randy, the wire, crimps and connectors are lower grade than I'd trust (or use) in a high power appliance like an espresso machine. Also don't like the look of what seems a naked connector in that blue wire (which looks like it's high temp grade wire yet too thin by far), that one must carry voltage....
LMWDP #483
Top

With that many connections burnt, I would strongly recommend replacing all of the wires in there except for the cable that goes through the wall of the machine and to the outlet, and the blue wire that has the thermal fuse in it(Under the bent copper clip).

All of those green/yellow ground wires used as current carrying conductors is bad form. Not actually illegal (and a Pavoni is so simple that they're not going to fool anyone into believing that they're grounds) but when the chance is there to replace them with decent 14 gauge heat resistant black/white or brown/blue why not?
Top

I agree with others that this machine would benefit by new 14 or 16 AWG wiring and quality connectors using a quality crimping tool. I think the stock Pavoni wiring is 1.5 mm (~ 16 AWG) which is sufficient, but nothing wrong with going with the thicker 14 AWG.


Quietlystormy wrote:When I tried to power it back on, the lights flickered in the switch, but that is all the machine will do.

That symptom may indicate that your thermofuse has burned out. Odd that you would see any light at all when the fuse has opened, but people do sometimes report that, especially when the switch is held halfway between the I and II setting. (Maybe the lamp is somehow responding to inductive current?) If you replace the thermofuse with a simple bypass wire and find that it works again, you know that was your problem.
Pat
nínádiishʼnahgo gohwééh náshdlį́į́h
Top

If you need to replace the thermofuse don't let the opportunity to change the blue wire for a thicker one go by.
LMWDP #483
Top

I hope it was not expensive.
If it was, claim your money back and return it.

You received it with a leaking boiler and (probably) worn out gaskets...
And it seems to me the electrical wiring was poorly redone ...

Wrong color coding, wrong wire size, floating connections and I believe I see more brown marks than only on the wires...

Redo it totally (what about the elements...) or sent it back. Sorry.
Regards,

its a bit of a leftovers bin kind of wiring, (besides the ground wire color used where its not supposed to which bothers my OCD)... wiring aside, is that a rebuilt element? (Im not used to see the two element leads so close to eachother)
You are forced to re-do the wiring on that one, properly check the switch that could have been gone too and dont reuse that thermal fuse even if it wasnt blown.
I dont know if I would send it back but I would put in a complaint, you might get some money back.
“Eh sì sì sì…sembra facile (fare un buon caffè)!”
Top

Thanks all for the input. I've had it a week (bought on eBay) and it sounds like I should try to return. If I can't return and have to rewire, I may come back here to check my work... and ensure I don't burn down my home. Thanks again everyone!
Top
← Back •
By accessing this site, you agree to the site's terms of service. If you need help with the site, please contact us.