Just a received a lightly used GS/3 MP yesterday and noticed the brew boiler pressure never rose above 9 bar, so I attempted to adjust the expansion valve but found that when fully tightened, the pressure still did not rise above 9 bars. Upon further inspection, the valve is askew, which leads me to believe that it may have been cross threaded. I started to unscrew the valve while the machine was off but hot, but started to lose a lot of water out of the valve and the machine made some strange gurgling noises, so I decided to stop and wait for it to cool down.

I'm going to remove the entire expansion valve, inspect it and try to reinstall it straight. If it is cross threaded, obviously I'll buy a new one. Am I on the right track here? Do I need to bleed the group since I've lost so much water through the expansion valve? Advice?

EDIT: So it seems like the expansion valve may not be cross threaded, but the housing itself is a bit askew. So i reheated the machine and now the brew boiler pressure doesn't rise at all and I get no water from the group, accompanied by a sort of creaky/gurgling noise from inside the machine. I didn't particularly care for it, I turned it back off and am waiting for some advice.

The machine was serviced before it came to me, and it appears they somehow over tightened the expansion valve so much that it twisted the copper tubing, see photo below. This looks like a job for a service technician, maybe not one for me. 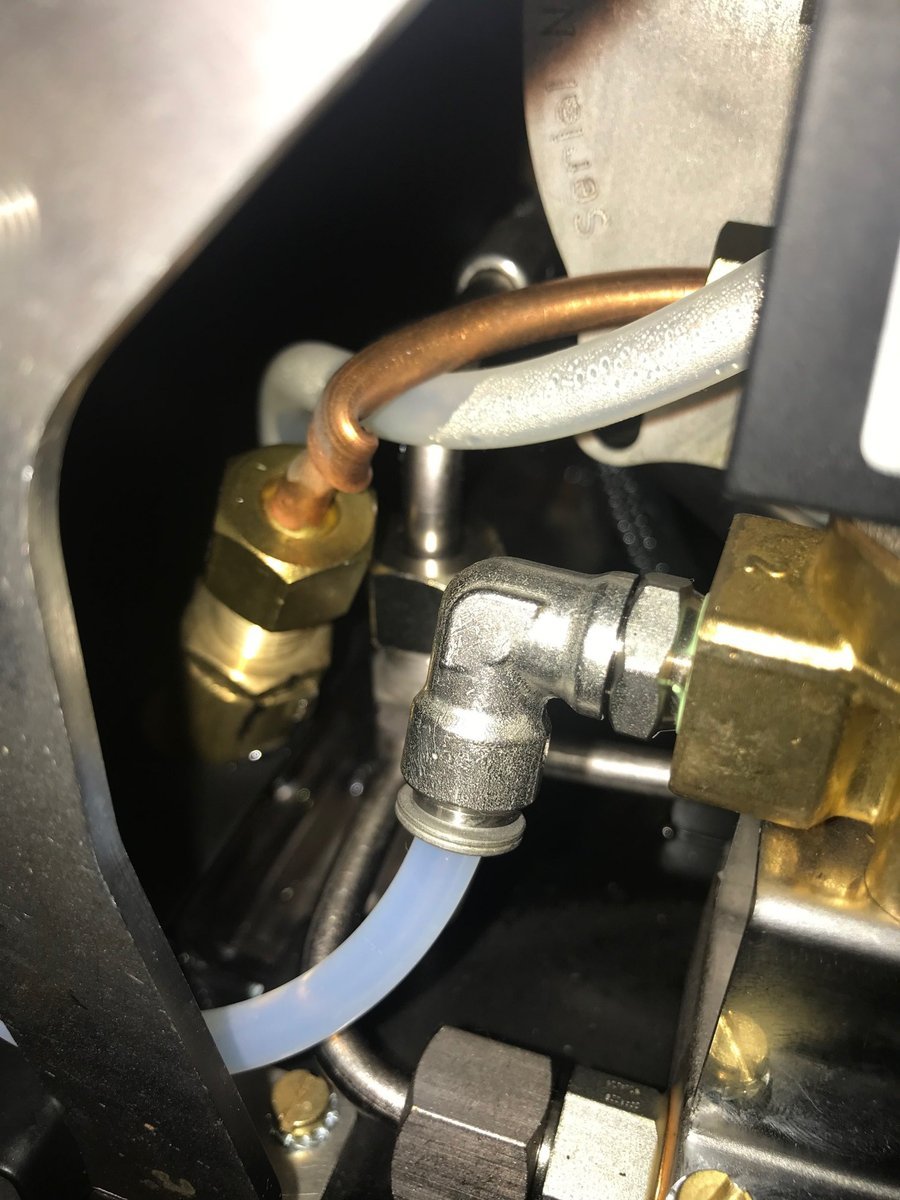 That looks like the kind of thing you might try yourself with a bit of copper tube and a couple of compression sleeves ("olives"). You should be able to re use the compression nuts. Even if you buy a cheap tubing cutter it should be way cheaper than an LM service call.

Even if it fails you've only lost about a tenth of what a home servicing will cost you.

Incorrect technique. Using two wrenches allows one to hold the tubing/fitting in place while protecting the tubing itself from torsion during tightening/loosening. You are correct, that tubing should be replaced. If you decide to do it yourself, filling the tubing with sand before bending will help prevent collapse and can be easily washed out.
Top

That makes obvious sense, but the manual made no mention of using a second wrench for counter torque. Since the expansion valve was already quite tight (maybe as tight as possible?), and pressure never rose above 9 bars, could there have been another issue keeping my boiler pressure low? Keeping in mind it just came off Freight on Friday.

Additionally, when the machine, the expansion valve is quite leaky, which is surprising because not only is the valve tight, but the copper is bent.
Top

I haven't seen anything like that here on H-B!

Sure looks like someone ran into the same problem you did -- i.e., boiler pressure not rising above 9 BAR -- and tried to screw down the expansion valve so hard that the copper tube got twisted. Lucky the tube didn't get twisted completely shut, which could have led to boiler pressure exceeding safe limits.

Several possibilities as to what caused the original problem:

2) The connection between the expansion valve and the adapter, or between the adapter and tube, isn't water tight, either because it's cross-threaded or not screwed down tightly enough.

3) The expansion valve is defective and won't close beyond the point where max pressure was limited to 9 BAR.

4) The expansion valve is clogged with scale or debris, preventing it from closing beyond the point where pressure is limited to 9 BAR.

It sounds like your attempts to adjust the valve have made the problem worse. Could be that the cross-threading or blockage got worse, or maybe that tightening the expansion valve has caused the twist in the tube to spring a small leak.

Note that all of these symptoms allow water to escape from the boiler, but it doesn't take very much of an opening to reduce max boiler pressure to 9 BAR. Only a tiny amount of water would escape and you might not see any in the drain box or under the machine.

If you can remove it without further twisting the tube, it might be worthwhile to disassemble the expansion valve and inspect it for blockage or damage. If there's scale or debris in there, soak the pats in distilled vinegar followed by a thorough water rinse. If it still doesn't work you'll need to replace it. Cost is around $30-$35.

The twisted tube definitely needs to be replaced, especially if you see any leakage. It's not hard to do. Of course, the machine has to be off, cooled and the boiler drained before you do that. It's not a terribly difficult job. Could be easier if the front panels are removed, which isn't difficult either. Don't try to fix or fabricate the tube yourself. You can buy a replacement tube from your dealer, an LM service tech or from LM USA, price is in the $25-$30 range.

BTW, water coming out of the expansion valve when you unscrew it is normal. In fact, that's how you drain the boiler. I'm not surprised that you heard gurgling noises. That would be air getting into the open expansion valve and making it's way to the boiler where it would bubble and rise to the top. The boiler will automatically fill back up when the expansion valve is set properly, but you'll need to re-bleed the boiler to get the air out.
Top

Peppersass wrote: If you can remove it without further twisting the tube, it might be worthwhile to disassemble the expansion valve and inspect it for blockage or damage. If there's scale or debris in there, soak the pats in distilled vinegar followed by a thorough water rinse. If it still doesn't work you'll need to replace it. Cost is around $30-$35.

For that price I'd be tempted to just pay it. But for our edification, is it any more complex or proprietary than compression sleeves slipped over the tube and compression nuts?

While not the same tube, this threads into the opposite side of the tee on the boiler from the OPV tube (and shares the same fitting on that side): 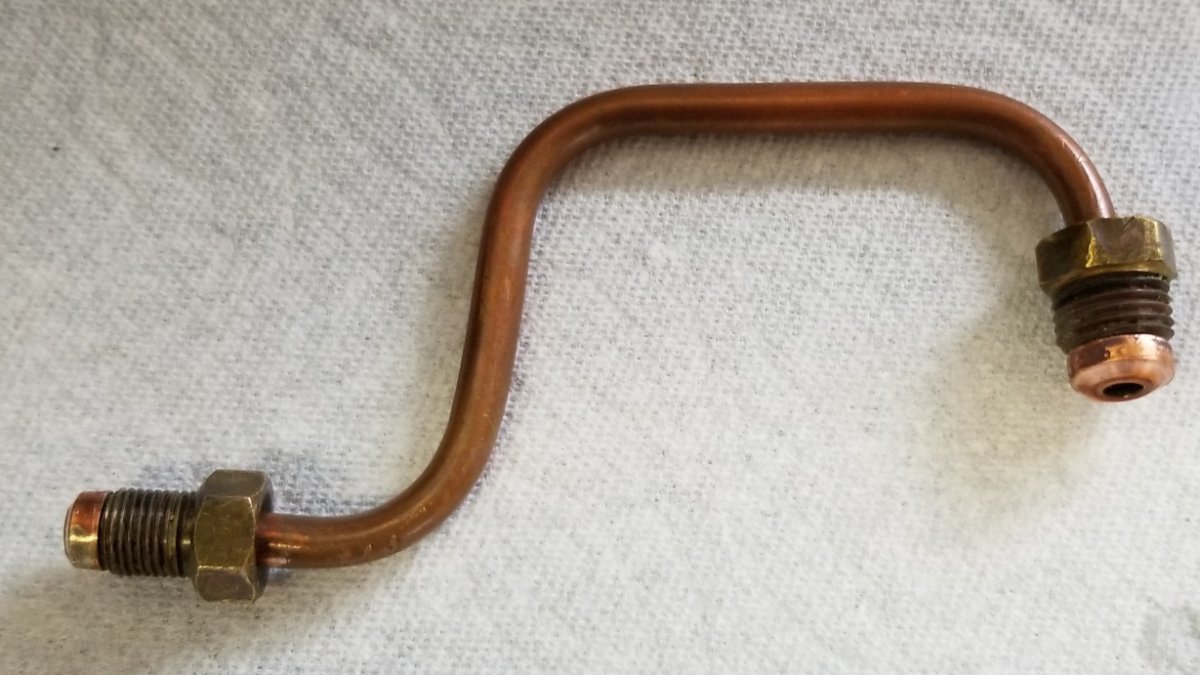 This sealing method is quite common for BSPP threaded fittings on Italian espresso machines, but found in very few other places on this side of the pond. Were I to be found in the OP's position, I'd likely try removing the nipples and nuts from the gnarled tube with a brazing torch and replace the tube for a few dollars, but given the cost of one's time, $35 or so for a new tube is a fair price to pay.

Whoa! Not what I expected at all. Lacking Jake's mad skillz, I would definitely pay for a factory replacement.

Here's a coincidence: Today I saw that my brew pressure was creeping up to 12.5-13.0 BAR during reheat, so I grabbed a pair of pliers to adjust the expansion valve. There was some resistance to turning, which is not unusual, so I applied more force. The valve appeared to move, but no change in the max pressure. Uh oh. I removed the right side panel and, sure enough, the tube between the boiler and expansion valve was twisted in a manner similar to the OP's, which also caused the expansion valve to be tilted. Luckily, the tube isn't closed off.

No doubt mineral deposits have frozen the lower housing of the expansion valve. I suspect that may have happened with the OP's expansion valve, too. Earlier I said that some debris could have blocked the expansion valve from closing all the way, which was why the OP couldn't get pressure higher than 9 BAR, but now I think the expansion valve had been set too low to begin with, then froze in that position. Efforts to increase the pressure twisted the tube.

I may have a spare expansion valve or one that I replaced years ago that could be in OK shape, but I've ordered both a new valve and new tube. Not expensive relative to other GS/3 parts.

I'm also going to check the output of my commercial cation softener, which I haven't done in quite a while. I suspect the hardness has crept up and it needs recharging.
Top
← Back
By accessing this site, you agree to the site's terms of service. If you need help with the site, please contact us.