Hi folks,
I have a weirdo problem I've never encountered before, and need ideas!

It's an Italian-made pre-Philips Gaggic Classic. I cleaned it up for a friend who found it in a yard sale, fitted new seals, it made nice coffee, and then he eBayed it. Buyer sent it back saying it was tripping his RCD.

Unpacked it today and could see the mains switch had new scratches. Plugged it in without switching it on... and it blew my RCD too!

That suggests there's a short in the mains switch, I guess. But checking with my multimeter, there's no short to ground or similar. I only know to test by checking for an open circuit or low-ish resistance but there's nothing. Checked the cable and no short on there either, from live or neutral to earth. My understanding is that RCDs work by detecting current between either live or neutral and earth.

When the buyer said it was tripping RCDs I thought it might be the typical problem where there's damp in the element insulaton which is shorting the hot to the boiler. But obviously that's not the case here.

I have checked the wiring and it all seems exactly as it should be.

I suspect the buyer was dodgy but it's too late to do anything now. I checked the original photos and the switch was clean, now it has fine scratches over the front. Perhaps the buyer switched it out, more likely he simply dropped it and damaged the mains switch, although again it is weird as there are no scratches on the metal.

But I'm not so much bothered by what happened in the past, as what is happening with the wiring now! Has anyone every encountered any similar problem, or can anyone suggest what the issue with the switch (or anything else) could be? TIA.

I can't see how photos will help but just in case

Attached is a photo of the machine, on the left, as it was when i sent it out. I took the photo to compare the pre Philips and post-Philips machine. This machine has the bigger solenoid etc and an older-style pump. 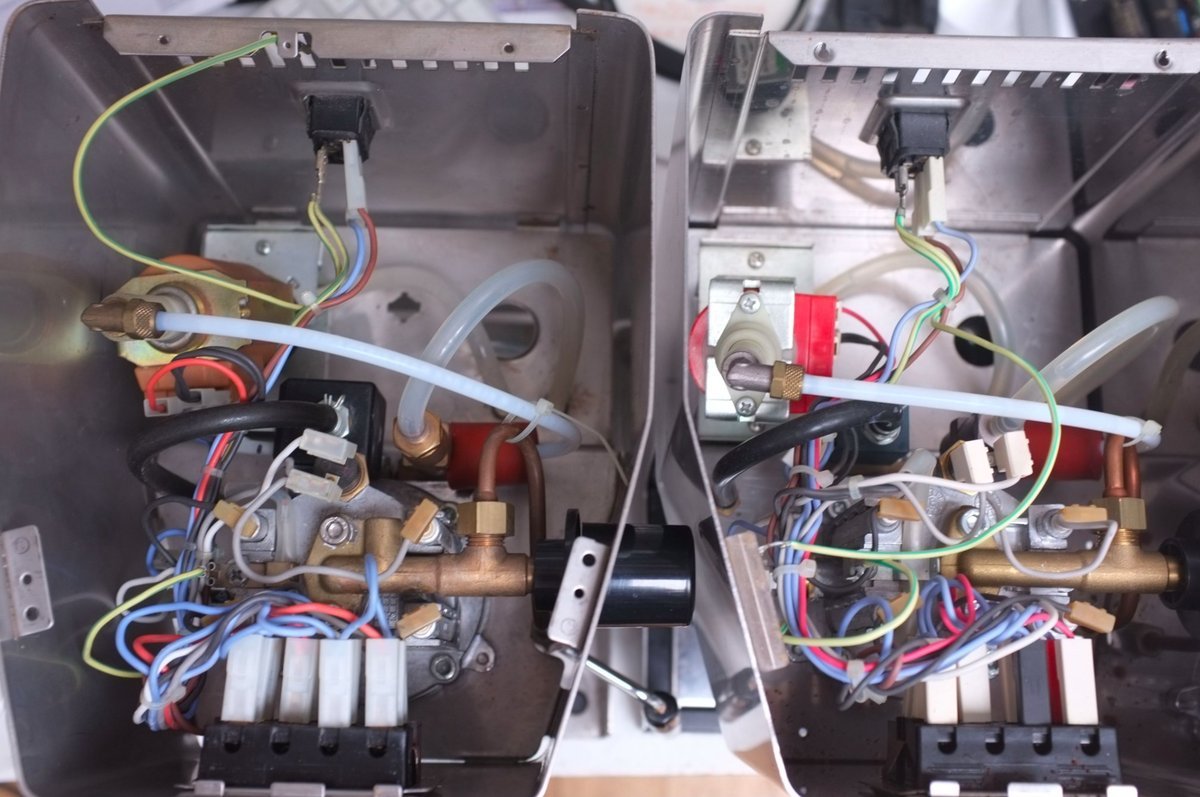 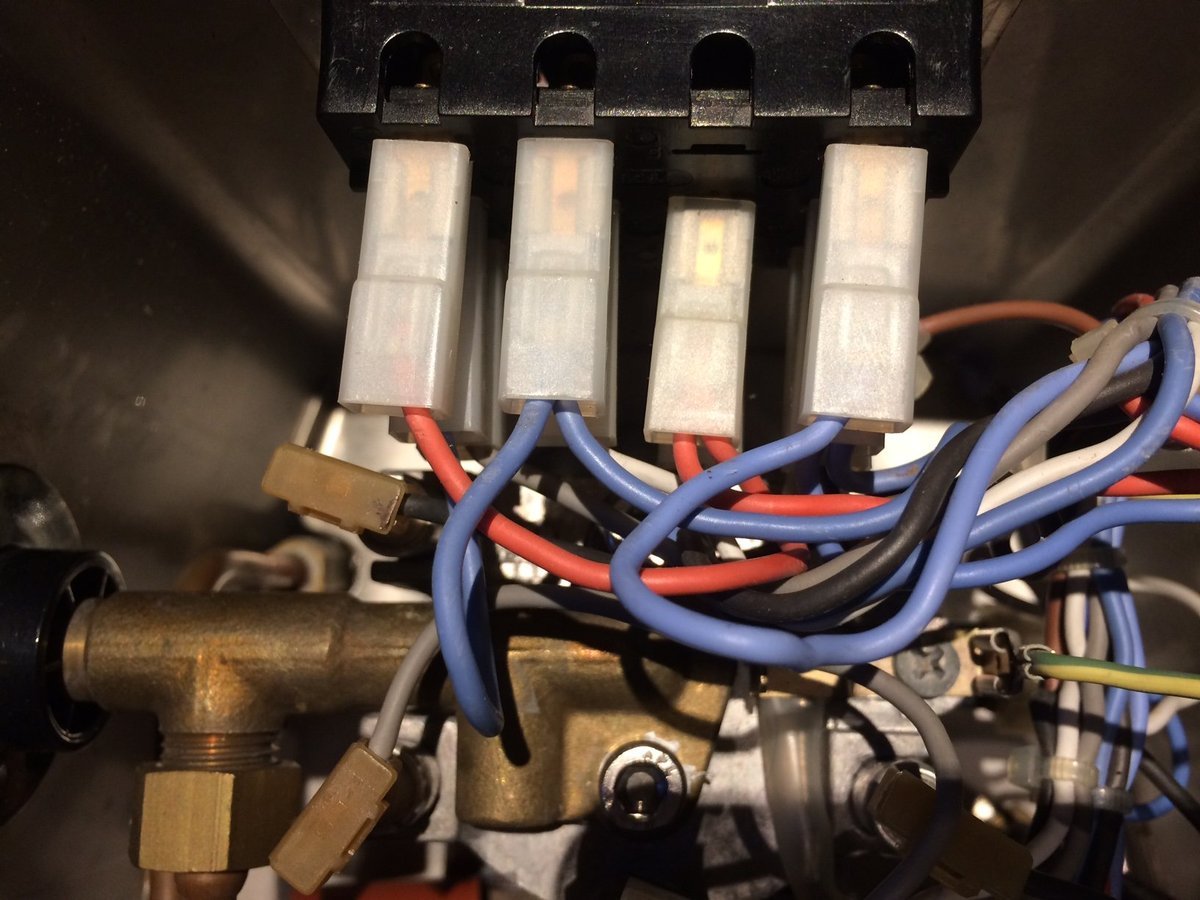 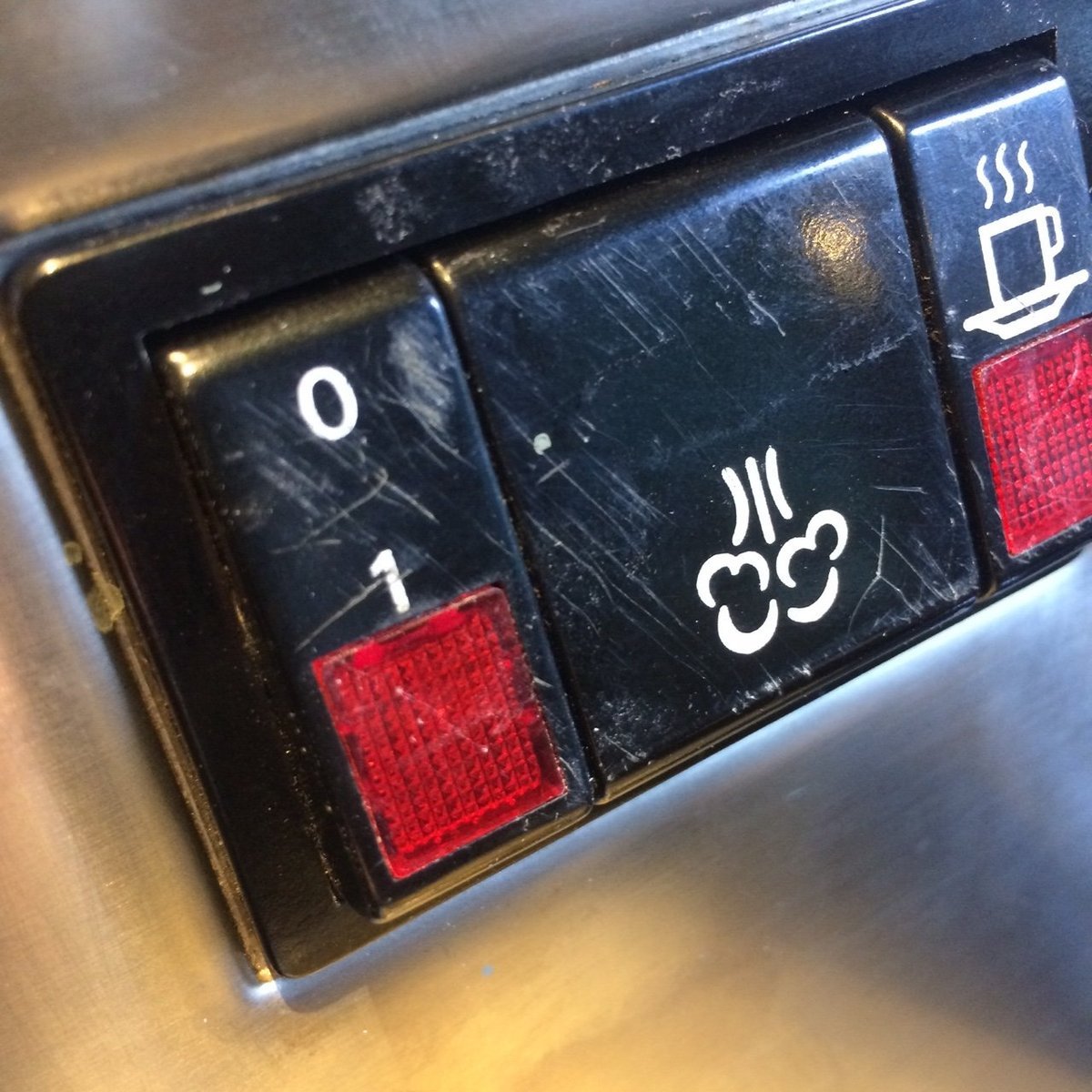 I've also shown the mains switch, now in a poor scratched state, but as you can see, the metal in the case isn't damaged. Then finally wiring to the switch just in case the buyer transposed any connections which are causing the issue.
Top

Those switches can be a problem, the easiest thing is to change it, heard techs bitching about them often enough, its not just 3 separate switches in the same housing. If the problem was before the switch then unplugging the wires at the switch would still trip your gfci. With a tester you should be able to make sure the switch is actually faulty, since it was in someone alse's hands youll have to check all the rest too Im afraid.
For the scratches it could even have happened if the machine has been turned around and pushed against a wall, or put face down, maybe only the switch was put face down while unplugged to test it, maybe its not the switch you sent out, anybody's guess, stuff happens but it isnt a sign that the buyer had much care, its not just a couple scratches...
Been told of people selling electronics that have the habit to mark the circuit boards so they know if something funny happened, so...
“Eh sì sì sì…sembra facile (fare un buon caffè)!”
Top

I've save an eBay search in case I can find a used switch.

But can anyone comment on why the RCD should trip when the multimeter doesn't show a short?
Top

RCD (ground fault interrupter/GFCI - US) trips for a current imbalance >5mA (may be as high as 30mA outside US) between hot and neutral. Doesn't care if leakage current is returning via ground or through your hand touching the cold water tap. This 5mA only requires 24K ohm across 120V (48K across 240V), so looking for continuity/hard short may be inadequate. Remeasure unplugged using ohms scale.
Top

The buyer probably needed a replacement switch and found a way to get one for free.
-Chris

Urgh. My friend checked and the guy has sold a few Gaggia recently. So, disappointingly, it is a scam.


Jabberwocke wrote:RCD (ground fault interrupter/GFCI - US) trips for a current imbalance >5mA (may be as high as 30mA outside US) between hot and neutral. Doesn't care if leakage current is returning via ground or through your hand touching the cold water tap. This 5mA only requires 24K ohm across 120V (48K across 240V), so looking for continuity/hard short may be inadequate. Remeasure unplugged using ohms scale.

Very helpful, thanks. That makes sense. I'll look at a higher resistance scale, but for the abovementioned reason I suspect it's a new switch we'll need.
Top

Some have opened the switch to fix it, since the part isnt exactly cheap, you could try that too.
But if they switched the switch (

) who knows what else they pilfered...

Or keep the machine and wait, since you said they sold other Gaggias, the next one they put for sale turn the trick onto them.
“Eh sì sì sì…sembra facile (fare un buon caffè)!”
Top

My friend found they used the switch on another machine - and broke off the corner getting it out. They sold it on eBay a week after returning our machine

I did have a quick look inside the machine and couldn't see anything else that was swapped out, and I'm pretty confident they didn't go inside as it looks like they prized our switch out from the front (!)

If anyone has any link for a switch repair I'd love to see them.
Top

I dont have a link at hand but if you go look for "gaggia switch assembly" with repair or teardown or whatever other word that means take it apart and fix it, google should be able to pull that stuff up. The old, now closed, Gaggia forum is still up for viewing, you can also make a search in there.
“Eh sì sì sì…sembra facile (fare un buon caffè)!”
Top

Just an update for this weird fault. It was the cable.

I actually had the switch refurbished but the RCD still tripped when it returned. went through the loom very carefully and all cables seemed correct. Investigated by removed the switch connections... and still it tripped. Then tried a different cable.

Never seen this happen before on anything else. Checked the IEC socket in the machine, examined the plug for shorts, likewise the cable connection, it measured as an open circuit across the connections. So just a strange aberration.

Then to further confuse matters once I had power I had no flow through the brew head. Took apart the OPV valve, again, to check but it was all clean. Swapped out the coil from my Rancilio Silvia and it worked again. Original coil is a KP07 - but I've read from people who have used a KB09, which has the same size hole thrugh the middle but is slightly bulkier, in their Silvia. I think it will fit the Classic too, but if not I'll fit the new one in the Silvia and put the Silvia coil in the Gaggia.

thanks to everyone for your solidarity in sorting this. Strange to have a machine that's been messed with then developed other faults, maybe our buyer swapped out the coil too, maybe not, but at last we can move on.
Top
← Back •
By accessing this site, you agree to the site's terms of service. If you need help with the site, please contact us.