I love the colour of the machiene and the cups match up really nice!!!

drgary wrote:Thanks to everyone who helped me with this project, especially my wife, Janet, for enjoying my coffee hobby with me and accepting something this big on our counter; Jay, who helped me get that boiler apart; Dave (aka McDave) at Allann Brothers, who advised and sourced factory parts; Doug and Barb Garrott who coached me, sourced parts and talked me into this fix in the first place; erics, who helped me sort out plumbing and other issues; RayJohns, who advised and encouraged me to buy way too many tools (I'm glad I now have them);

You can never have too many tools!!!

Congrats on a beautiful job well done. It's just stunning to see the final results.

BTW, on the label and the glue.. you might want to consider using some 3M VHB tape. VHB stands for "very high bond" and should do the job nicely for that label. You can stick the label to the tape, then trim and peel. I use VHB tape for all sorts of stuff around here (e.g. the motorcycle, etc.). Handy stuff to have around.

Thanks everyone! I'm loving having this as my daily machine.

I am finding that the Loctite 567 works as a thread sealant (as designed) but it isn't an effective thread locker (which it isn't) for the steam tap. Temporarily I'll try adding plumber's tape and when I have time I'll put some of the Loctite 2046 thread locker on those taps. Other than that it's smooth sailing and the steaming is so strong I've got to learn how to stretch milk differently.
Gary
LMWDP#308

http://machines.cafeslevier.free.fr/
I look for persons to translate into English one or + pages of my site... :-)
Top

(Now I'll have to ask you how you restore your machines so quickly!)
Gary
LMWDP#308

If you check on Page 1, I've just created a detailed and linked index to the restoration as promised. Now this is really done ... at least until the next small stages of tune-up. In a couple of months I'll remove the case and retighten the boiler bolts with the torque wrench, for instance. But at this point I'm enjoying dialing in my Conti Prestina.

Here's an overview of how I restored this so it's updated and can be returned to stock, collectible configuration. I've copied these notes from the Lever Espresso Machine Gallery post.

For this restoration I've made some modifications that can be reversed because this is a rare machine.

1. I've left off the boxy group enclosure on the front because this group is so interesting visually.

2. I've installed a vacuum breaker so I can turn it on with an appliance timer in the morning. That way it's pre-heated when I get up. (Added May, 2013: I've temporarily removed the vacuum breaker because of leaky fittings connecting it. The machine takes 10 minutes to come up to heat after I release the air pocket through the steam wand, so I may just ditch the vacuum breaker altogether.)

3. The stock PSTAT was replaced with a Sirai commercial PSTAT that can be accessed from the top. It has a much narrower deadband than the original. To adjust it I lift off the cup warmer tray and have left the screws off for that purpose. (Added in May, 2013: The fittings connecting the Sirai PSTAT were leaking and I had trouble fixing that, no fault with the Sirai. I went back to the original plumbing and replaced the Sirai with a Jaeger PSTAT that keeps a narrow deadband, is much quieter, and doesn't take up much space in the machine.)

4. I fabricated the drip grate from a Synesso grate because the original was missing. I think this one looks better.

6. The serial number plate was factory mounted on the front plate. That's distracting and ugly, so I've mounted it on the back of the frame using rubber cement so it can still be seen but is less intrusive.

7. The stainless steel panels were originally polished. After trying unsuccessfully to re-polish them after removing scratches, I did a brush finish. I think that was a happy accident as now there's a softer look to the machine and less emphasis on the boxy shape of the case.

8. The original colors were red and dark gray. The new powder-coated colors coordinate with our kitchen counter and espresso cups.

9. I've also added a thermofuse to one of the heating element leads as a possible protection against failure. Whether or not that works, the appliance timer is plugged into a GFCI outlet.

This was quite a learning project and I expect the next restoration will be much easier. Next up is completing the rebuild of my Olympia Express Coffex, but with the Prestina on my counter I'm in no hurry.

Successive applications of PTFE tape to the steam tap didn't prevent it from starting to turn. Last week I stripped off the old PTFE and did some new wraps, thinking I had it well secured this time. The machine started as usual on the appliance timer and I found it almost steamed dry but caught it in time. If these taps aren't screwed down far enough the valve doesn't seal. Oops!

So I went with my old plan to fasten these taps using ultra-expensive Loctite 2046 Food Safe Thread Locker. At a "bargain" price this syringe was $38! I'd already bought it and had it at the ready, though. It's a small syringe and I would use another thread locker next time. Oh well. It took all my hand strength to get these plungers delivering blue ooze. At first it wasn't mixing. Another hard push and it came out cloudy blue and I applied it to the tap threads and to where the taps join the boiler on the outside.

With the machine apart I re-tightened the boiler bolts to 15 foot pounds as Allann Brothers' Dave had told me to do for an early servicing. Some had gotten quite loose. I also retightened the sightglass hex screws. I don't want any more leaks after what I went through cleaning this up the first time, speaking of which ...

Blue Ooze at PSTAT Connections -- and It's Not Loctite

I noticed what appeared to be drip residue on the side frame, looked up and saw this under the Sirai PSTAT fitting! This was fastened in early February, not today, April Fool's. And no, this really happened, unfortunately. I just applied the blue Loctite this evening, nowhere near these connections, and I'm waiting for that to cure. I haven't heated the machine since then. 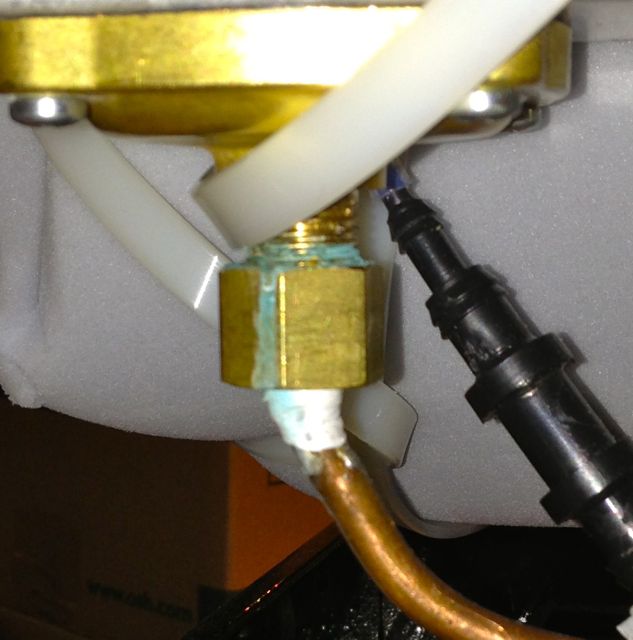 At the other end I noticed blue ooze at the T fitting under the manometer. At least it wasn't where I'd soldered compression fittings. 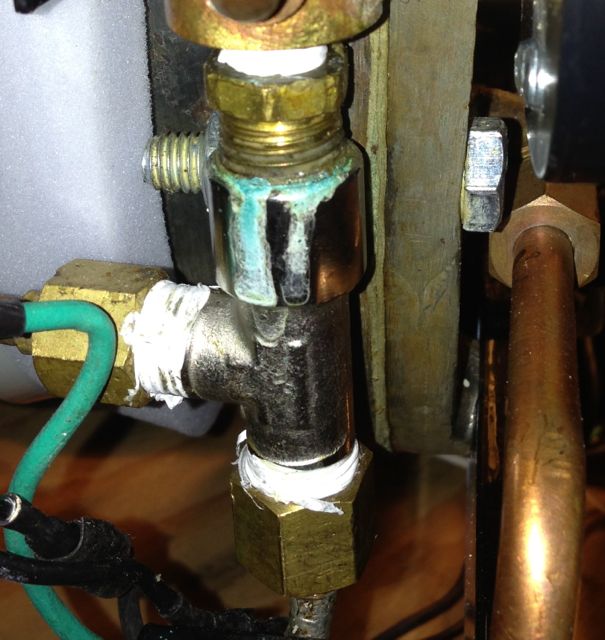 I'm going to wipe off that ooze and bring the machine up to temperature for leak testing (tried to wipe it off with water and some comes off but not all). It's in different connections with brass connecting with brass on one end and with a chromed fitting on the other. Both are from small steam leaks, so I wonder if that melted some Loctite 567 thread locking compound or something like it. I can't tell if that's copper corrosion from the compression fittings and nuts or residue I haven't seen elsewhere from thread locker that didn't start blue like that. There's no scale buildup inside the machine, I checked. If I'm getting slow drips here I'll need to get those pipe fittings squared away for good this time.
Gary
LMWDP#308

This morning I brought the Prestina up to temperature. The steam and water taps are held in place without turning and they easily open or seal. I tightened the fitting under the PSTAT. I didn't hear any steam escaping there or at the other fitting. I thought I saw a tiny droplet of water on the fitting near the manometer knuckle. Since that isn't tightened down hard but is positioned to be in place I'm pretty sure I used Loxeal thread sealant, and some of that may have worn off. I'm wondering whether the blue discharge is copper corrosion from the pipe, although similar pipe on my machine doesn't corrode. I will disassemble and check this because if the pipe is corroding and clogs I could have a PSTAT fail to shut off the heating element. If the pipe is okay I may need to put fresh thread sealant in the manometer fitting and just make sure the PSTAT connection has enough PTFE tape wrapped in there so it tightens down firmly. I will of course check the compression fitting and pipe to make sure there are no cracks.
Gary
LMWDP#308