You can find LED indicator lamps at Paneltronics. These lamps contain the proper current limiting resistor so they can be connected directly to 12-24VDC/120AC/240AC (depending on the lamp). Note, these particular lamps are not spectacularly bright, but they do the job. You can find other similar products with a little googling.

BTW, adding the indicator lamp on the heater element was a nice touch.
Top

Perfect find. The 5/32 LED indicator lights will plug right into the frame holes, so I won't be changing that from stock configuration, and the lights will be subtle. Order was from a distributor that didn't require a $25 minimum.
Gary
LMWDP#308

Ready for Launch on Christmas Morning

Thanks to everyone the initial wiring and plumbing are done, and the Prestina is ready for testing. I'm awaiting shipment of pilot lights so those aren't in yet, but at this point it just may be ready to make coffee. 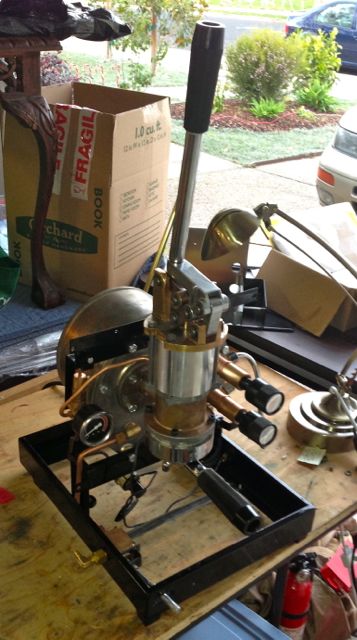 What it Took to Wire it Up

While it's fresh in mind I'll document in words what it took to do the wiring job. It wasn't as easy as it looks and it wasn't hard either. Again extra time was taken in learning process. I'll do this much faster next time, now that I am familiar again with the rudiments of reading a circuit diagram, knowing where the essential devices should go in the circuit and knowing what terminating hardware to use.

I got a heavy duty power cord that was long enough I could trim some off the unfinished end and have extra wire to work with that's color coded.

Rather than wrap wires around screws and tabs and risk connections coming loose, I terminated all wire ends in quick disconnect or ring connectors. The quick disconnect terminations are spade shaped and slip over the heating element ends or match male to female to join two circuit devices. I used the ring connectors to fasten to the screw-on terminals of the power switch. I also used heat shrink tubing to insulate between the end of the wire terminal and the crimp portion of each connector. I didn't bother to color code the end terminations as the wires themselves are color coded. So my routine was to cut the desired wire length, use a wire stripper to bare the end, and twist the strands in one direction. Then I cut and slipped a piece of heat shrink tubing over the end before twisting the wire in the same direction into the crimp part of a connector. I positioned the crimp portion in a small vise and tightened down fairly hard until the wire was held in place. Finally I used wooden matches to gently heat the insulating tubing to shrink it over the crimp and where it terminated at the wire insulation. Here are photos of that process: 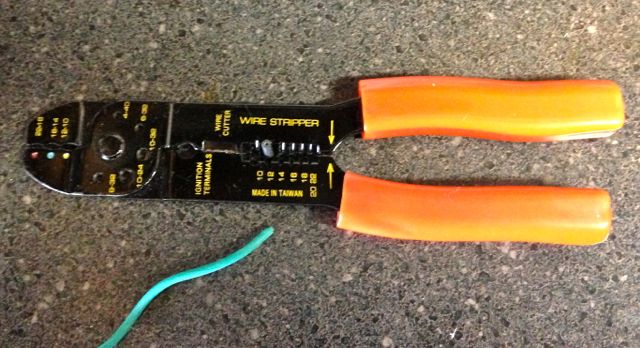 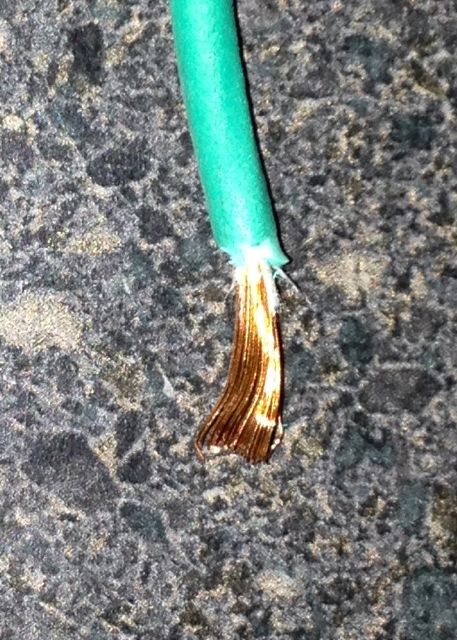 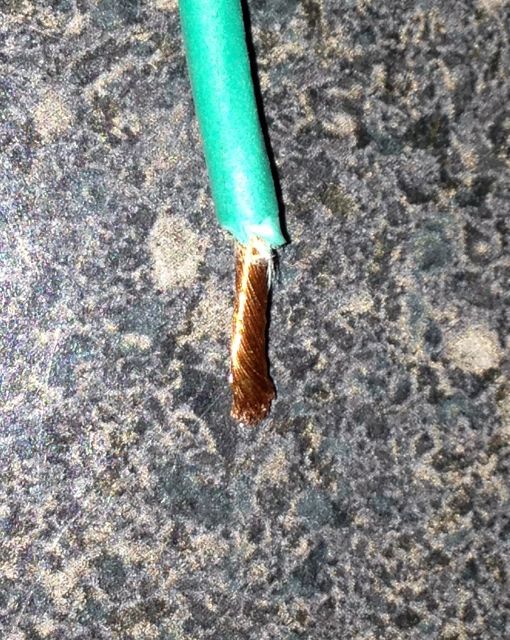 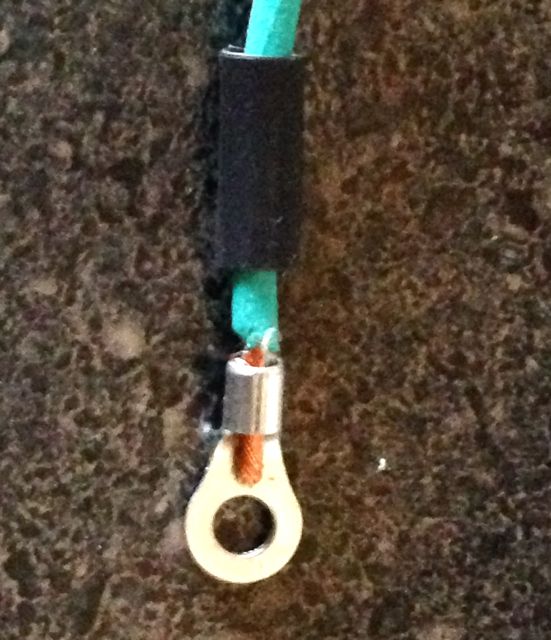 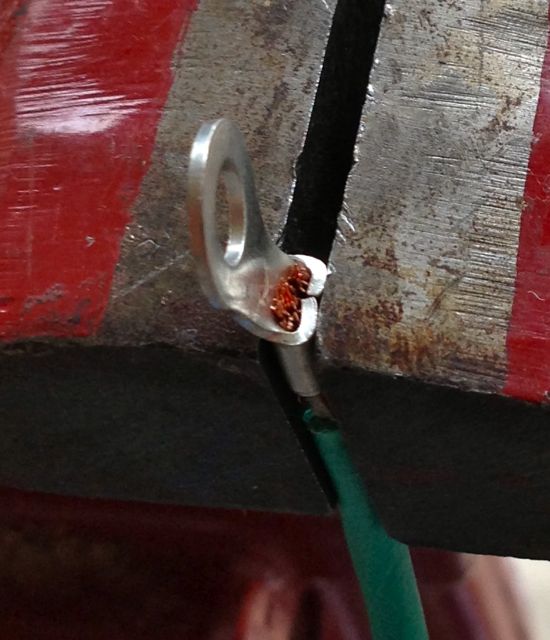 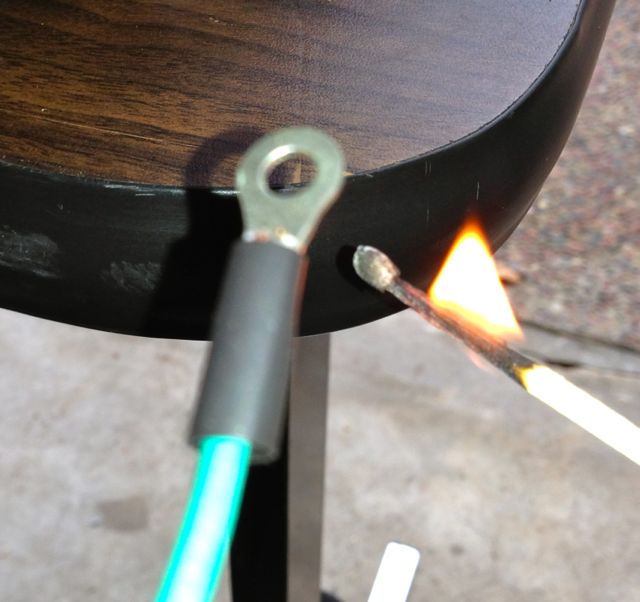 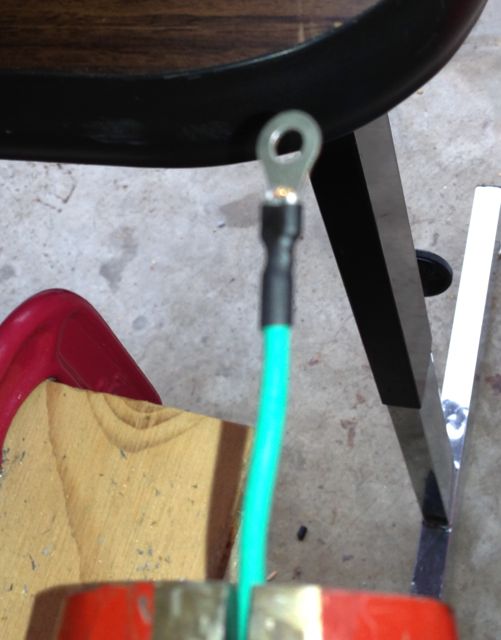 At one point I made it a bit hard on myself. I thought I had the quick disconnect ends I wanted but saw that they were encased in stiff plastic. So I set about trying to cut the plastic off of one of them. It was too hard and the scissors too large to get the job done. So I broke out a MAPP torch, positioned several of these connectors on the driveway and burned off that plastic, which melted into the composite of the driveway and wouldn't entirely burn. The torch was so hot the pebbles in the composite started exploding so a small stain of melted plastic is now immortalized for the life of the driveway. Ironically I later discovered how to use that connector. They're made so a multi-stranded wire is shoved into the crimp part, which securely fastens them in place and creates a good contact. Lesson learned, and this is one of the reasons why it takes longer the first time! Here's a close-up of those different kinds of connectors. But with advice that follows this on soldering, I'll probably stay with an uncovered connector rather than use the easy insert one on the left. 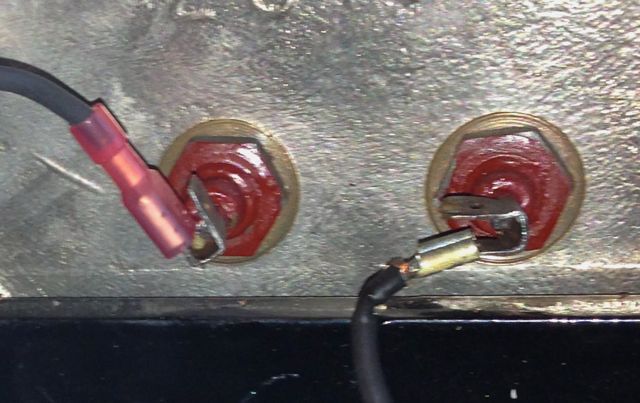 This operation was more challenging with the thermofuse for the obvious reason that if you overheat it, the fuse melts and becomes unusable. Also each end of the thermofuse is a thin, stiff wire instead of a thicker bunch of strands. It requires more careful positioning and a harder crimp to hold in place. To avoid overheating the thermofuse I gripped it inboard of the crimp with heavy pliers that were cool. These served as a heat sink while I gently heated the insulation tube to shrink it. I used a single insulation tube to cover the entire thermofuse and treated it similarly on both ends. Stefano Cremonesi cautioned me to not shield the thermofuse too much from heat because I want it to be able to melt in high heat conditions, so only the thin shrink tubing was used to cover it.

Once I got into the routine above, it took me about an hour and a half to wire everything together. I finished by testing each connection for continuity with a simple, analog multimeter. This was done by setting it to read resistance in the 10 Ohm range. If the needle moved from infinite to zero resistance, the connection was good (except for the heating element which is designed to resist current to generate heat). The last part was devising a strain relief for the power cord. I followed Doug's direction to route the power cord out the bottom of the machine, under the frame, which is held off the counter surface by rubber feet. I don't know if this was best, but it made sense to wrap the cord a couple of times around a post of the frame, then tie two turns together and tighten down with a plastic wire tie. 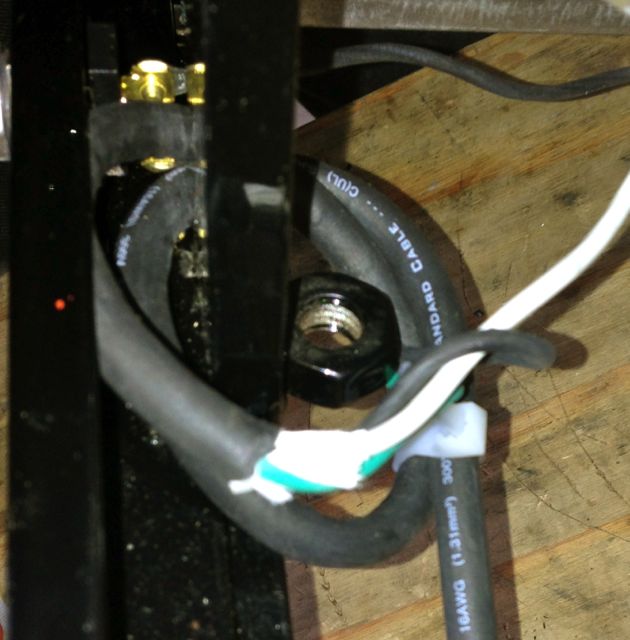 Here's the other side of the power cord end, where it connects with the power switch, grounds onto the frame and connects to the right terminal. 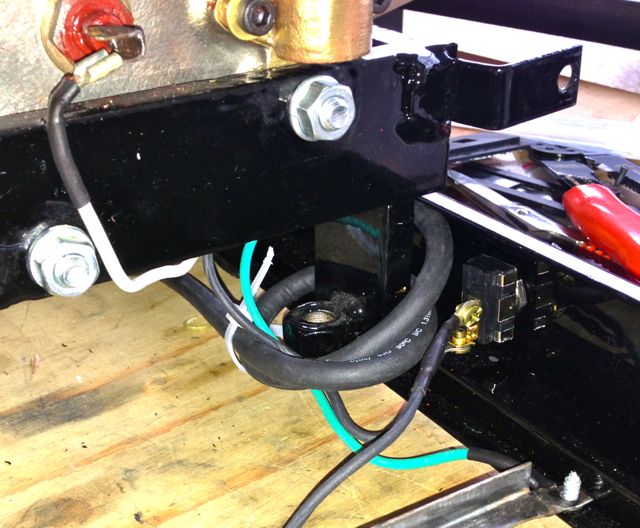 Other than figuring out the circuit, the most time consuming aspect was sourcing parts. Unless you live close to a real electronics supply store, it's hard to find everything you need in the right place. Buying online can be a runaround trying to find the right search term for an unfamiliar part or avoid high markups or minimus and shipping fees. Sourcing the connectors was easy at Radio Shack and Ace Hardware. I didn't find a termination strip I liked at Radio Shack or Orchard Supply Hardware. Radio Shack carries a small selection of indicator lights, but nothing that was quite the right size, and surprisingly many came only in red. If I'd been searching for individual colored wires they carry this by the foot at OSH. But I was out two hours searching and didn't find everything I wanted and eventually ordered the indicator lights online.
Gary
LMWDP#308

Looks nice. Your connections should be good, but in the future you might want to consider soldering all of the crimp spades. Usually what I do is crimp the wire on and then turn around and heat it up with a little torch and solder the wire to the spade connector. It just provides a little bit more secure connection and doesn't depend only on the copper wire touching the connector.

Like I say, you should be fine with it as is, but adding solder is a nice touch in my opinion. I did that with all the connections on the PID La Pavoni upgrade.

Thanks, Ray. What kind of torch did you use? Or is a simple soldering iron sufficient instead of a torch? Do you need any special kind of solder and flux, like the alloy I got for doing the copper pressure fittings?
Gary
LMWDP#308

I use a small butane soldering iron, as well as a butane insert for a zippo lighter (which has an open flame). It just depends on how much heat I need to get into something. The solder I use is electrical solder, which is very thin and has its own rosin core (same idea as when sweating pipes together, but not as involved).

Here's a video I made a while ago (to help my brother-in-law learn to solder). The stuff I use is shown in the video:

Ditto what Ray said. When rebuilding a variac, I used crimp connectors on the wires from the main power plug. After about a month, they came loose, went POW right in the middle of a roast due to arcing, melted the insulation, which then caused a short and so I lost power. Redid with new crimp connectors and solder, and have since not failed me.

You might be tempted to use silver solder as it is lead free, however, chances are the power wires and crimp connectors you used have some lead in them already.

First BTW: while you can use a vice to crimp, it's not ideal. Most wirestrippers have a crimping part back behind the stripping part; you want to be sure to use the right kind (slow curve or bumpy curve) to maximize durability of the connection.

Last BTW: instead of matches (which do work in a pinch but are dangerous), you can often use a hair drier to get heat shrink to work

Very likely Mrs. Dr. G has one... or maybe even you

Yeah, I think it's especially a good idea with something like an espresso machine. Keep in mind you are pulling 8 amps through those wires. That's constant heat cycling, which can tend to work against connections which are only crimped (but not soldered).

The crimp gives it a good mechanical connection (i.e. holds it together). But soldering improves that mechanical connection and also provides a very good electrical connection. Additionally, if you draw a little bit of solder back into the wire (behind where it goes into the connector) this acts to give some support to the wire. When you only crimp it, there tends to be some additional stress placed on the wire where it traverses from the insulation into the end of the spade connector. Solder running back into the wire (sort of up into the insulation a hair) helps strengthen things a bit.