and good luck with finding a chrome plating shop in the bay area! there are none left thanks to EPA. maybe one in san jose. all the others are in the central valley. i started to get parts nickel plated instead. it has a yellow/golden sheen to it.it looks warmer in comparison to the blue sheen of chrome.
nickel plating is not as scratch resistant as chrome though.
gold seal plating in oakland is a great shop! talk to gary.
Top

Let's say for discussion's sake I might need to drill out a bolt -- and hope I don't have to -- do you use a different kind of bit, a hardened kind like cobalt? And how do you center it? Is there some kind of a clamp or positioning device to keep it in place or do you just have to hope you've got good enough aim?
Gary
LMWDP#308

You definitely need a drill bit that is for metal. Colbalt should work. As for clamping I guess it would depend on what you are drilling through. If the pieces seem to be unstable I would at very least use a pair of vice pliers (which are awesome for gripping the stuck bolts / bolt ends and hitting with a heavy rubber mallet as well!). I always drill a centering hole with a smaller bit and work my way up to the appropriate size. After doing this you will need to run to the hardware store and purchase a 're-threading' tool that is the size of the bolt you would like to ultimately use.

The way I finally got all of my rusted bolts to come off was with a deep freeze spray from a local auto supply store. That is what they have been using on old motors for ages. Freezing / cooling metal shrinks it. What I do is I spray the bolts until they are frosty white, wait a minute and then apply more penetrating oil (some freeze sprays even have penetrating oil in them!). Wait a few minutes and then start hammering on it. Here is a decent walkthrough. http://www.ehow.com/how_5829493_freeze- ... bolts.html .
Top

Another note to Doug:


orphanespresso wrote:The big power tools are real macho and make one feel totally empowered but to get a good quality tool they are really expensive and the cheapies are almost more trouble than they are worth.

Not to worry. No delusions of grandeur here, I was joking with Ray.

To address the paint versus powder coat decision, I've gathered that pros and cons are:

Paint:
- cheaper
- done at home
- the power's in your hands
- no need to remove name plates, tags, etc., just cover them over
- may/may not be stock for "true" restoration

Powder coat:
- tougher, more resilient finish to heat, rust and abrasion
- more expensive (but not out of reach)
- may require more dis-assembly of badges, tags, or removal of other parts compared to paint touch-up
- may/may not be "stock" for true restoration
- servicing by professionals includes sand blasting to resolve rust
- depends on professional to get it right, otherwise hard to remove if they won't back up their work

Please let me know if I missed anything.
Gary
LMWDP#308

orphanespresso wrote: Proxxon makes model making and hobby type small format tools and the Proxxon dremel is a DC power tool with a transformer and about any and all bits that you can imagine. I constantly use the wire brushes for both inside and outside of threads and general tight spot cleaning. The tool and attachments are very high quality and the rotary accepts drill bits as well, and the bits are actually like milling cutters for getting in to drill again in tight spots.

Let's say for discussion's sake I might need to drill out a bolt -- and hope I don't have to -- do you use a different kind of bit, a hardened kind like cobalt? And how do you center it? Is there some kind of a clamp or positioning device to keep it in place or do you just have to hope you've got good enough aim?

Drilling out a bolt is tricky business. Usually the best method is to center drill (i.e. drill a smaller hole) into the bolt, then use a heavy duty screw/bolt extractor to remove it. Spray with WD40 and let the threads soak over night.

Also, if you can, use a bolt splitter to split the nut. However, if you are trying to remove a badly stuck bolt from something (such as a frame), which needs to remain undamaged, then a bolt extractor usually works well. Sometimes I will also weld a nib to the bolt itself. The heat from welding will help break things loose. Then you can clamp down on the nib and often remove the bolt that way (which saves trying to drill it out).

If you do have to drill it completely out, make sure you center punch the starting hole. As mentioned, clamp down (which usually means you are drilling on a drill press). You can use a hand drill also, but be careful and go slow. Drill at a slow speed usually also.

If you are new to working with metal (welding, drilling holes, milling, etc.), it can be a lot more tricky than you think. Also, keep in mind that stainless screws (or threads) can bind up and fuse together under high heat. As such, if you are trying to remove a stainless bolt and/or a bolt from a stainless housing, you can end up making matters worse by applying too much heat.

I remember a while back, I was making a welding cart. I decided to use a stainless steel bolt as the axle for one of the wheels. So I put the SS bolt into the nut, then proceeded to weld the nut to the square tubing, which made up the frame of the cart. After everything cooled down, I went to remove the SS bolt. No dice. It had fused into the steel of the nut something awful. It absolutely would not budge. I try to get it out, but no luck. I finally had to cut the tubing out and re-weld another section in.

You'll learn a lot though.. working with old rusty stuff

Pretty soon you'll be an expert at removing broken bolts

Those proxxon tools are pretty impressive looking. You could fit an entire workshop of power tools on a 12' bench! The drill press footprint is 8.5" x 4 3/4". Wow! Cool stuff.
Top

Finally had a chance to get at the machine again for a few minutes and used a rap of the mallet to get the group off. (A "rap" here is a little more than a tap but lots less than a hard strike.) To avoid damage to the piston I positioned a small piece of plywood to spread the force of the mallet rap. 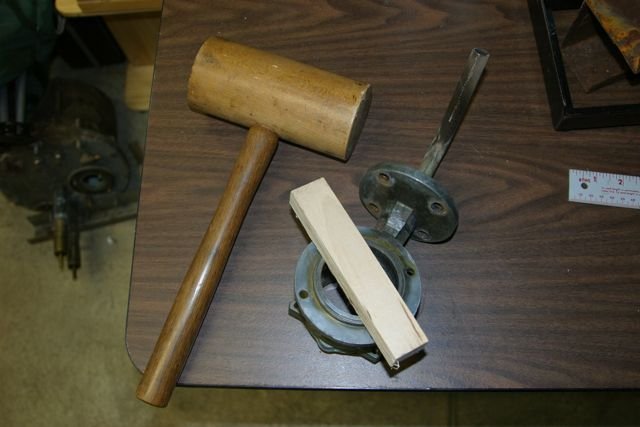 The gasket chipped off easily with a flat head screwdriver. The good news is I don't see much scaling in the boiler. Despite the scaling that shows in the sight glass, it seems the previous owner actually de-scaled the machine regularly. Now I question whether it's necessary to open the boiler to replace the gasket. Then again, I shortened one of the group to boiler bolts when the bolt end came off because it was frozen to the nut. So it looks like I'll have to take it apart to get at the other end of the bolt. This photo shows the boiler inverted, so the group bolt that's shortened is at the lower left. I'll take more care this time to remove the bolts at the boiler seam and will start by dripping some penetrating oil onto them. If they don't come right off, I'll apply heat. And if that doesn't work, more penetrating oil. If they remain stuck and for general information for others reading this and doing their own restorations, I wonder whether it's worth investing in an impact screwdriver and if so, what kind is sufficient without breaking the piggybank?

After consulting with Doug Garrott, I will replace the PSTAT with a Sirai and he'll help me fashion a pipe and mount for it.
Gary
LMWDP#308

Do you have a close up photo of the stuck bolt?

Here's a better view from re-cropping for close-up. The twisted off bolt end to the group is on the left. On that I'd need to get inside the boiler to catch the other end and replace it. The bolt where I had to cut off the head is on the right. For that one I'm thinking of cutting grooves in at 90 degree angles to try to turn it out with a phillips head screwdriver. If you need a better picture let me know. When you say "better picture," it might have to be better than this!