You made the right call. Thank you!

Sometimes the obvious isn't so obvious. 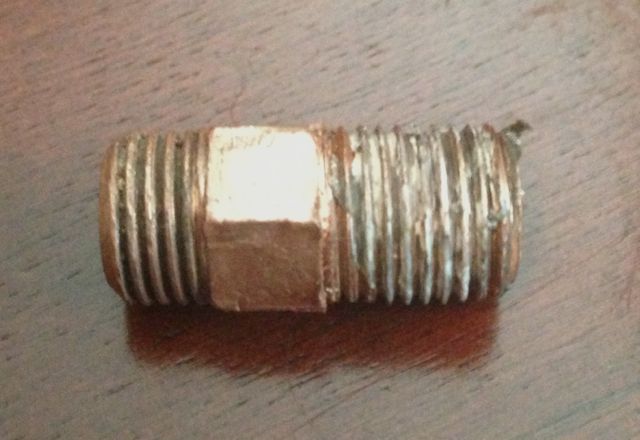 This side faces out. 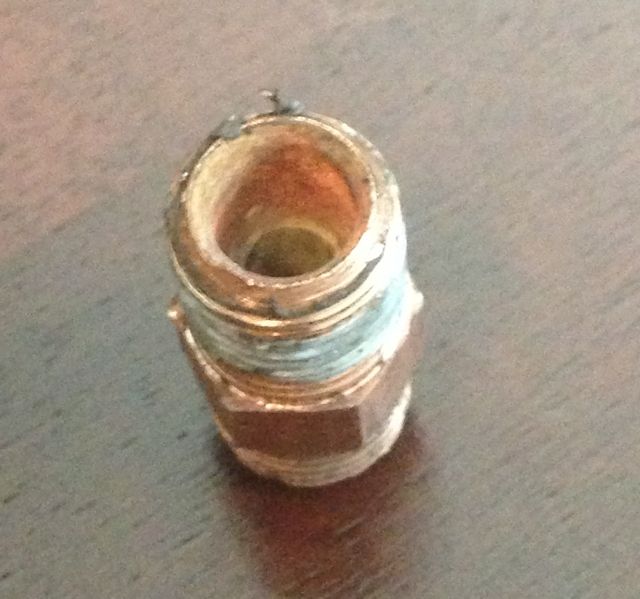 I had some time early this morning to do more restoration. This was while waiting for our electrician to arrive in a driving rainstorm. At this point things go fast -- or they promise to do so. I ran into a little snag and fixed it. I attached the BPP fitting in the orientation erics suggested, wrapped Teflon tape on it, attached the manometer pipe and tightened down. With all of those threads on this other side I thought I had to use most of them. Wrong! I got it fairly tight and decided to use up more threads but then the nut began to spin too freely and wasn't advancing. Sure enough, I had stripped threads on the BPP nipple. Luckily the cap nut was still in good shape. Now what? Order a new BPP nipple and wait again??? 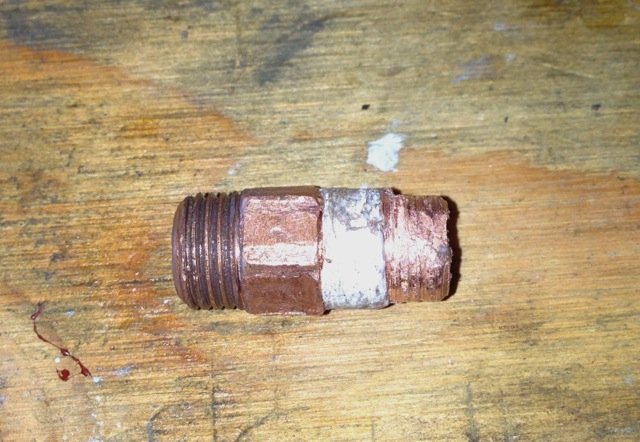 I pondered for a couple of minutes and considered I had two ways to go. I had not used all the threads on the BPP nipple, not nearly all. There were probably 4 or 5 threads unused with the pressure fitting tightened correctly. Or, I could shorten the pipe protruding past the cap. If this didn't work, though, I would have to rebuild that pipe and not being proficient in soldering steam fittings, that seemed risky. I chose to trim the BPP nipple using a rotary cutting wheel and see if I could get it to work. 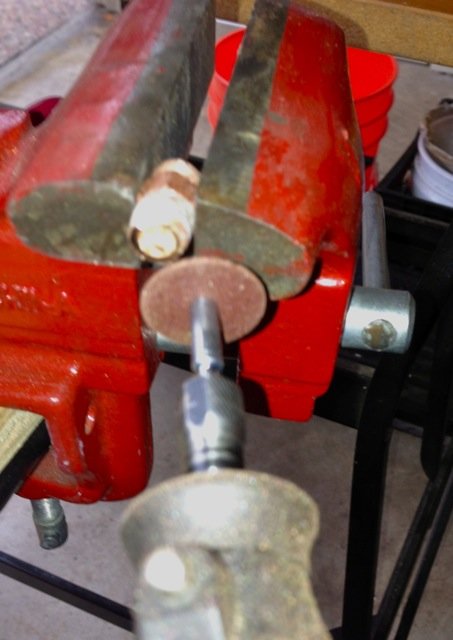 I used a drill bit the same diameter as the male end and deepened the hole. Then I used a flat file to smooth the end of the BPP nipple and a small rat tailed file to polish off the burrs. I tried fitting the pieces together. The male end was still too long to create a pressure fitting. I compared the width of the tightening nut to the number of threads needed and cut off more stripped threads. Then I deepened the entry hole. Since the BPP nipple had a small hole on the inboard end, I had room to drill. After filing off burrs, I was able to get a snug fit with about 1/2 thread to spare. 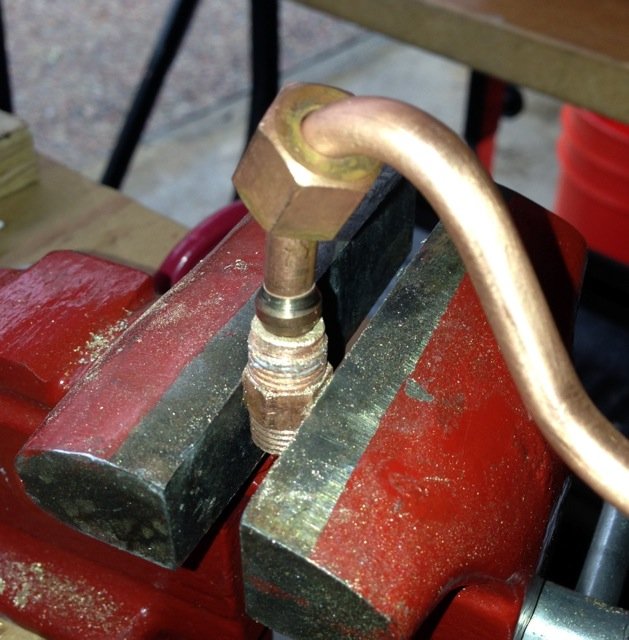 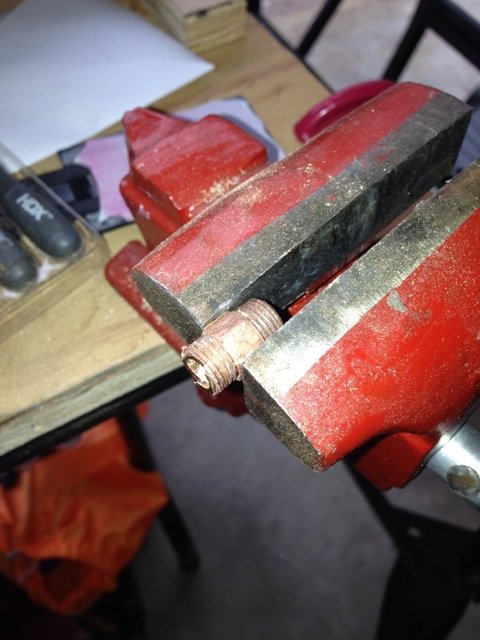 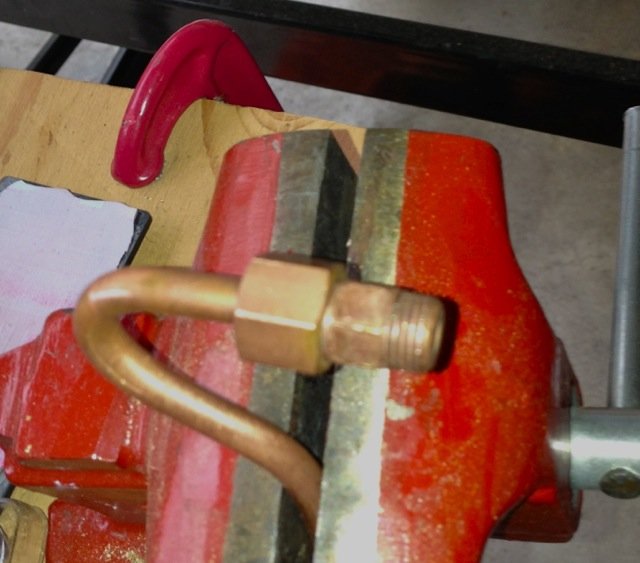 Now it was time to reinsert the BPP nipple and attach the manometer pipe. 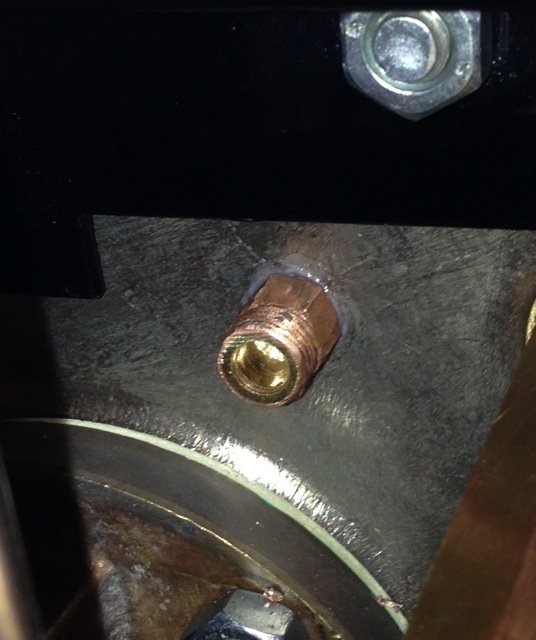 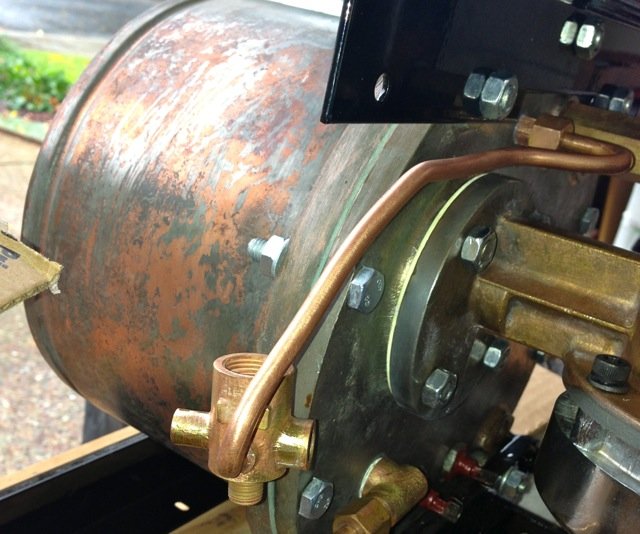 Next I threaded in the manometer to see how these parts fit together. 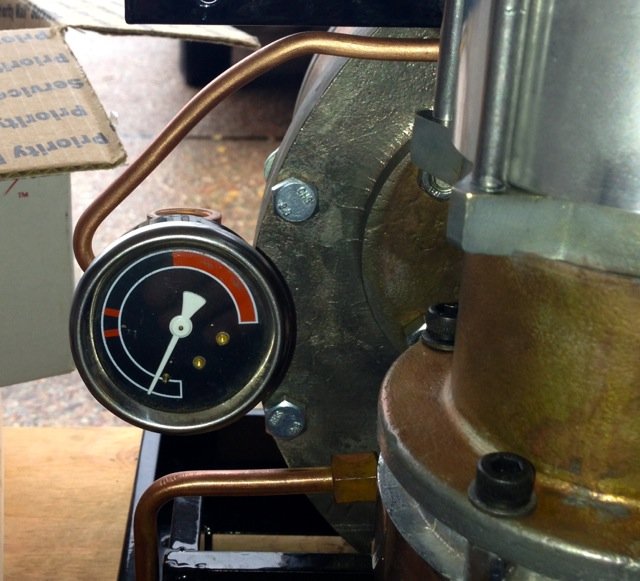 Without checking old photos yet, this looks like where the pressure release valve fits. 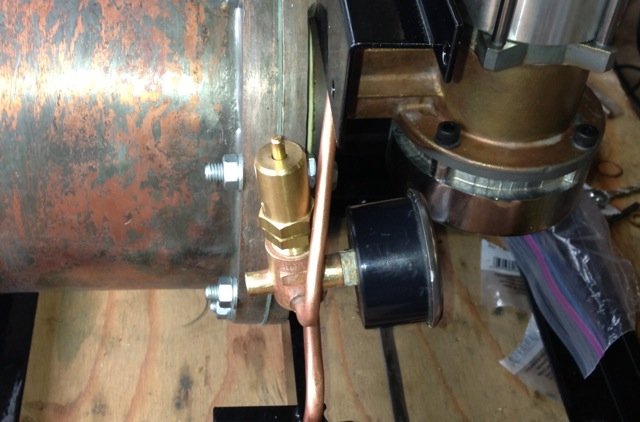 The manometer and pipe are a bit tilted, but I've found that gently bending the pipe I can work that into place. Not a worry for this initial fitting. Next I connected the original PSTAT pipe. I'm not sure if I'll use this because I'm using a much larger Sirai PSTAT and will probably not have it positioned under the boiler. I'll need to figure out where its adjustment screw will be easiest to reach. I'm also puzzling over the pipe fitting at the back of the manometer. There are no threads and there's no obvious way to connect something. However at this point I had to break off work. 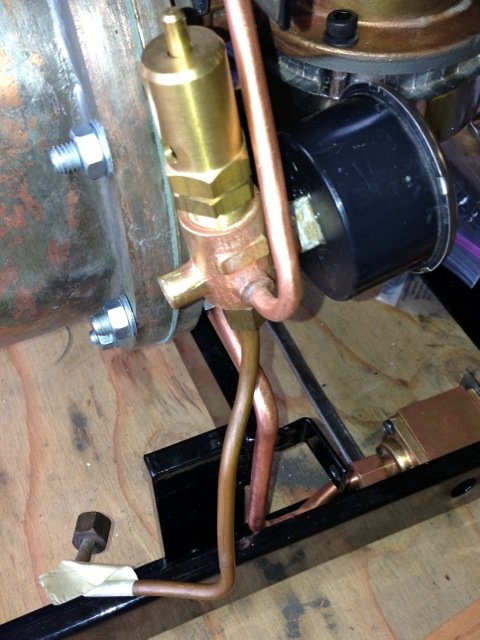 My electrician asked me to walk through his finished work. Then two helpers arrived because today's the day to deck the halls on candy cane lane. This is my other restoration project completed at day end. Merry Christmas and Happy Holidays to all! Cars are already driving slowly on our street to take in the Christmas lights.

I'm continuing to press forward with the Prestina rebuild and will soon be fitting and connecting more pipe.
Gary
LMWDP#308

It looks like I've got this assembled right. The old photos also explain the mysterious connection at the back of the manometer, which fits it on a bracket and attaches to the frame. The second photo shows the old PSTAT wired to turn the heating element on and off. It's very pleasing to see the neglected machine I started with versus what's coming together now. 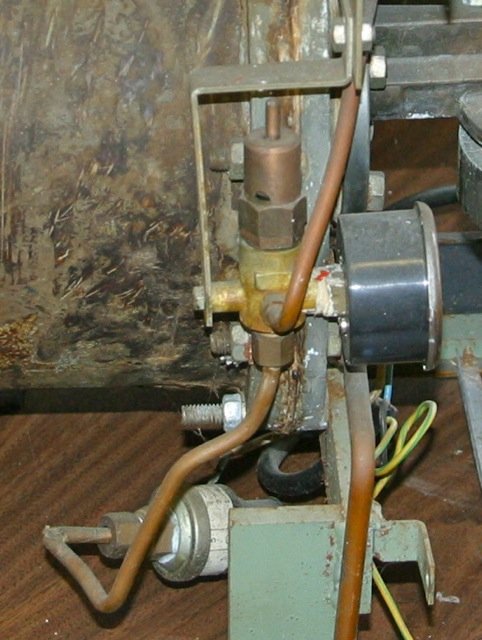 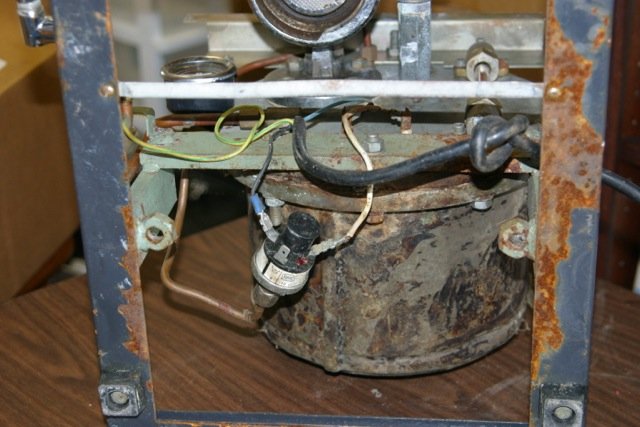 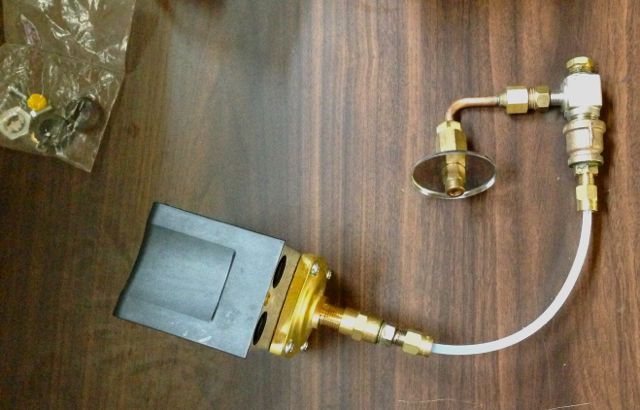 I just got off the phone with Dave at Allann Brothers, and he helped me figure out parts he sent me that I'll soon connect. He's assembled a Teflon tube that connects to the PSTAT and will replace the old PSTAT pipe at the bottom of the fitting holding the manometer. He's added a vacuum breaker that will vent when the machine comes up to pressure. It emits a very small amount of water that will be held by a metal dish that will face up instead of downwards in the photo. The parts that don't terminate in a pressure fit will be held in place by a Loctite equivalent I got from Stefano's Espressocare that can be loosened if needed. The cellophane bag on the left contains parts for the PSTAT (a grounding screw, rubber grommets for holes where wires will exit its frame, and a plastic cap for the adjustment hole in the PSTAT). He also sent me a metal cover for the PSTAT instead of the plastic one it comes with, since it will reside close to the boiler. I'll drill an adjustment hole in that to duplicate the layout of the plastic PSTAT cover. I asked about where to orient the new, larger PSTAT, so it can be easily adjusted. He advises that the entire case lifts off fairly easily but that I might mount it at the rear of the machine and face it forward and reach it from the front. This led to discussion of how one adjusts temperature with a Prestina. Dave agrees with Warrior372 that fine temperature adjustments are done with cooling flushes. He says the machine becomes fully heated about 30 to 45 minutes after powering on. Since this doesn't have an autofill I'll need to monitor the sightglass. If I start the machine on a timer and there's a leak it won't fill and I could burn out the heating element, and good luck getting another one for this machine. For this reason I think I'll add a thermofuse that would melt before the element overheats. There's one in my Isomac Amica that's a nice insurance policy.
Gary
LMWDP#308

I've just figured out a fun way to do an attractive, sturdy, hand-made drip tray grate because the one on my Prestina is missing. I'll get some stainless steel rod, thread the ends and fasten them with acorn nuts to a narrow steel plate on each side end. The plates will be drilled through and maintain the rods, spaced evenly. The acorn nuts will act as spacers on the outside of the bottom frame to position the grate in place. The threading of the rods will allow precise fitting. The grate will be wide enough to fit against the front plate. It will lift vertically for emptying a drip tray, which can be a simple cooking tray of close enough size. The rod gauge will be thick enough and the rods close together for a firm surface across the gap. Another option is steel tube. I'm wondering what kind of die will be sufficient for cutting the threads and whether rod is available pre-threaded on one side. I'm also thinking I may need to use a drill press for precision holes on the retainer plates. Or I could position steel over supporting rods, but I don't know how to edge it to make it look attractive. Anyway, these are my ideas. I welcome alternate suggestions.

Also the PSTAT adjustment screw will be reached with a long screwdriver by removing the circular cap from the front plate. Thus there will be no need to lift the machine or remove the case.
Gary
LMWDP#308

Rod isn't usually prethreaded on one side, but bolts are, so buy some bolts and cut off the heads (or leave them on). Amazon has a good selection of ss bolts.

I think the easiest way to employ your idea would be to use stainless tube and either run all thread rod through it.
Top

Thank you Dan and Jonny. Jonny's idea may be easiest. It reminds me of the aluminum bolt covers on my Voodoodaddy Pharos, which are held in place by bolts. The key is thick enough gauge tubes with flat ends that can snug up against a heavy gauge steel end. There Dan's idea of perforated steel may work, if I can find parts that match.

The perforated steel sheets on Amazon have a nice, industrial look. What would you use to cut one of those sheets if a band can't be found?
Gary
LMWDP#308

A thin zip disk on a die grinder if one has a steady hand and a pinch of patience. Sounds like a great idea on the drip tray, Dr. Can't wait to see this all come together and see some shot pics. These restoration threads are by far my favorite part of HB!
"Do what you want, you're gonna do it anyways!" - My father

Sheet metal shear. At least that what I use.
Top
← Back •
By accessing this site, you agree to the site's terms of service. If you need help with the site, please contact us.