Probably don't have to worry about bending too much.

My money is still on the collar and impact wrench idea.

You probably can't hurt much with the boiling stuff, although just keep in mind that sustained temperatures are used to change metal properties (such as annealing, etc.) You probably aren't dealing with enough heat via boiling to really worry about, but I still am not really a super huge fan of the idea. But with that said, I have no first hand experience with this and Christopher Cara does.

Either way, I'll be interested to see how everything turns out.

McDave got back to me and offered a solution that's so simple it had me slapping my forehead. Put in the wrench where I've got it and grip the flattened sides of the rod. Get a short bolt or screw that fits in the hole. Grip the head of the screw in channel lock pliers. "Lay the piston flat and lean on the Channel-locks and 1/2" wrench as if they were the wings of a butterfly and the piston is the body." It'll pop loose, then hold the rod steady with the wrench while turning off the piston. I just dropped by Home Depot and got a couple of screws of different length that perfectly fit the hole. My channel locks await me at home. (Added: It turned out these were vise grips, and they worked.) I'll post when I've given that a try. What I like about his solution is it uses easily available and inexpensive parts. Also he's done this a number of times and had it work. I liked the collar idea too but am hoping this simple technique will do the trick. This no chance of breaking anything with this method. I'm stressing or bending the rod and if it won't yield even after a vinegar bath, like Doug says, I don't need to do this for personal growth.

Ohhh - that actually sounds doable. There is no screw hidden by the spring?

Where did you get a wrench to fit between the springs like this? None of mine can! 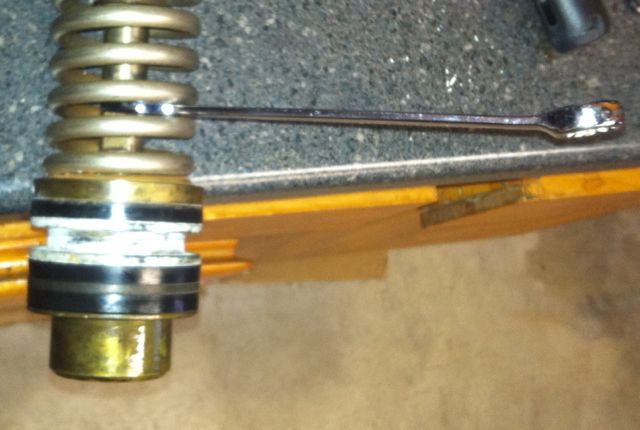 It's a 13mm wrench from a set I bought at Ace hardware. If you can get a large flat head screwdriver in between the spring coils you can pry them apart just enough to get the wrench in there. I saw a photo of a restorer in England who took a wrench that was too thick and narrowed it by taking some material off with a bench grinder.
Gary
LMWDP#308

That is an interesting approach, but - unless I'm envisioning things incorrectly - I don't think you are going to be able to get enough leverage without risking slipping and busting something up (assuming the piston is really stuck on the rod).

Just be very careful and I would suggest wrapping everything in a couple of layers of duct tape to prevent scratching.

I like the idea of indexing a screw into the hole, but I think some sort of fixture (such as drilling a hole in wood) or something is needed to transfer the force without risking slipping out of the hole.

BTW, do you own a strap wrench? You might give that a go first

Thanks for watching over me.

But ... before I logged on to read your suggestion I was able to accomplish this pretty easily. I followed McDave's instructions, almost. He had recommended a short hex bolt but I tried a little longer one that you see bent below the piston. I thought the longer one would give me a little leverage. Then I actually followed his instructions better by using a short bolt and voila, it quickly broke free without damaging anything. He recommended channel lock pliers, saying they would grip the bolt in a corner of the jaw. I interpreted that to mean vise grip pliers, which also worked well. The vise grip pliers was held away from the piston by its grip on the screw. For reference, the correct screw size was 5mm. Length can vary. Shank length was 12mm. 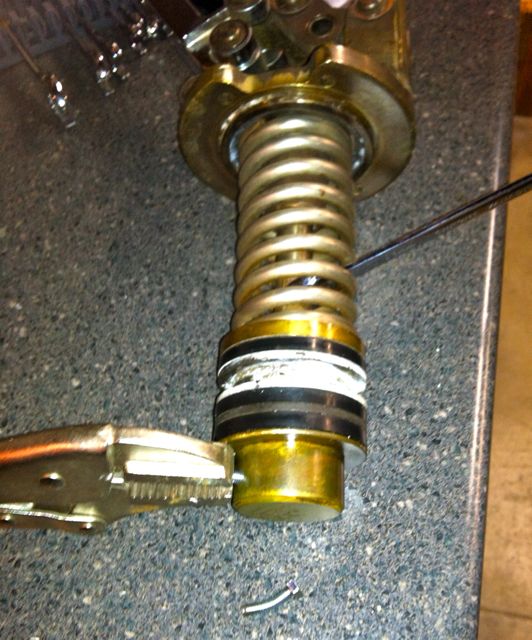 Turning this off appeared like it might get dicey in another way when the spring pressed against the wrench holding the piston rod. But the pressure there didn't increase much as I hand turned the piston all the way off. And now it's free to self-actualize!

Or at least I can clean it off really well and check out whether I really need to replace the spring. The current one in extension is 5 1/16" long = 128.59 mm. If McDave already has it on order I'll keep one spring as a spare part.

To completely free the piston rod I'll remove the lever pins and clips and this will allow it to slide all the way out for cleaning everything.
Gary
LMWDP#308

I see what you did. I wasn't thinking about turning the wrench, while holding the piston down. I was thinking you were attempting to turn the piston more.

With more than ...
Oh, and for the next poor geek that follows these instructions while knee deep in dirty Prestina parts,


RayJohns wrote:I wasn't thinking about turning the wrench, while holding the piston down. I was thinking you were attempting to turn the piston more.

I held the piston rod in place with the wrench and mostly turned the piston. Because the vise grip pliers had a good grip on a very short bolt and the bolt was holding firm, there was little if any chance it would slip and mar the piston. The shorter screw bent only very slightly and where it caught the lip of the hole a notch started. But it didn't bend much. I could feel it give slightly as I went so this was a controlled process.

Added above and here: The screw size was 5mm. Length can vary. Shank length was 12mm. This seemed an excellent balance for keeping the tip of the vise grip pliers away from the piston while limiting leverage on a short screw shank to minimize bending.
Gary
LMWDP#308

Gary, I can't tell from your photo: does the thread of the shaft stick out a bit past the end of the spring after you get the piston off? In other words, to reverse this process, will the piston screw back onto the shaft without needing a jig to compress the spring initially?
Top

The piston will screw on easily without initial compression.

@ JohnB. You wrote me offline to let me know that I was actually using vise grip pliers, not channel lock ones. This was a good choice because it held the bolt securely. I'll correct the thread above.
Gary
LMWDP#308