Thank you Ulrik. That Empress looks gorgeous on your counter!

Ya know, I've been watching all these people getting commercial lever machines. I sure would like to have one. Wait a minute! I do have one!

Time to get this restoration back on track! Two days ago I sold my fancy DeWalt rotary buffer. It wasn't up to the task, creating some finely polished highlights, leaving some shadowing, and unfortunately also created swirled scratch marks. So that's $150 back in my espresso hobby budget.

Today I finally had a couple of hours to spare and completed the brushed finish on my panels. Is it perfect? Did it eliminate all the swirls if I look really close? No! But what's the point? In the future I can have them polished or chrome plate them if budget allows. Here are the results of today's work. This was achieved using 80 and 100 grit sandpaper on a hand block, clamping the group enclosure on a table backed by cardboard. The other flat piece I completed today was the front panel, and I held that down by hand. 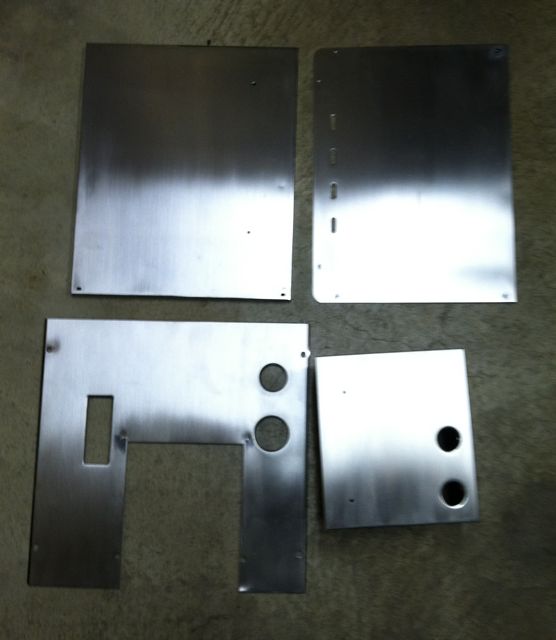 This weekend I'll get to work cleaning up the inside of the boiler with a wire brush, inventorying and cleaning internal parts and putting together an order for things like replacement bolts for the boiler. The bolts themselves will be stainless steel and the nuts will be brass to avoid them freezing together in the future.
Gary
LMWDP#308

Alright! I'm glued to the screen for updates. Good to see this one underway again!
Top

Go Gary Go!!! I can't wait until we can see that machine up and running.....and taste the nectar! I think the panels look great for a vintage machine..... I wouldn't want it to look all "new"..... some of the charm of vintage machines is the stories that chips, nicks, and scratches tell......or you can make up some stories....

All the best on this machine's rejuvination.... couldn't happen to a nicer machine......or guy.
LMWDP #347
Top

Thank you so much Tom and Clay! I'm happy to have cleared some time to persist just a little longer and bring another wonderful machine back to life.
Gary
LMWDP#308

Cleaning Up the Boiler

Long ago, in a galaxy far away, I cleaned the boiler in an acid bath and rinsed it thoroughly. Today I got to the next step, which was to clean up the residue still stuck to its surfaces using wire brushes and sandpaper. Here's how it looked when I started: 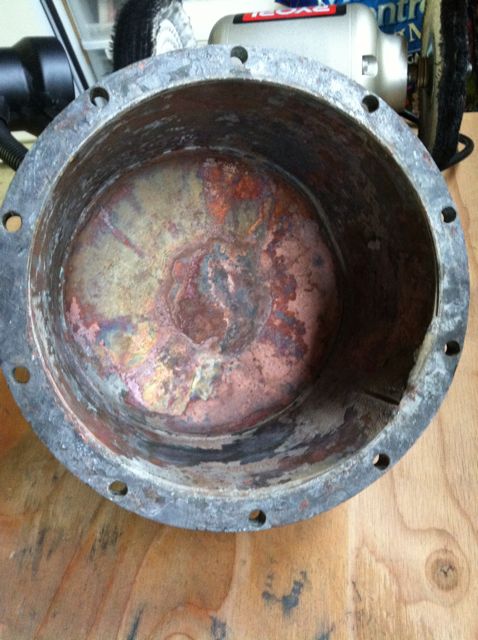 Here's a close-up showing some of the crud still on the inside surface of the boiler. 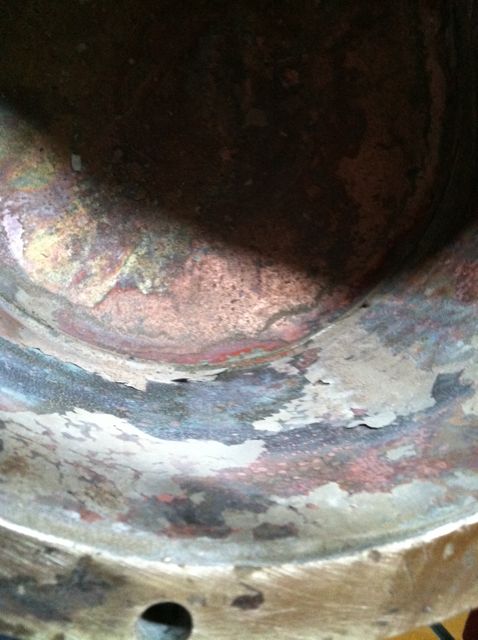 The inside of the front plate looked similar but at least there was nothing ready to flake off. Sorry for the fuzzy focus. 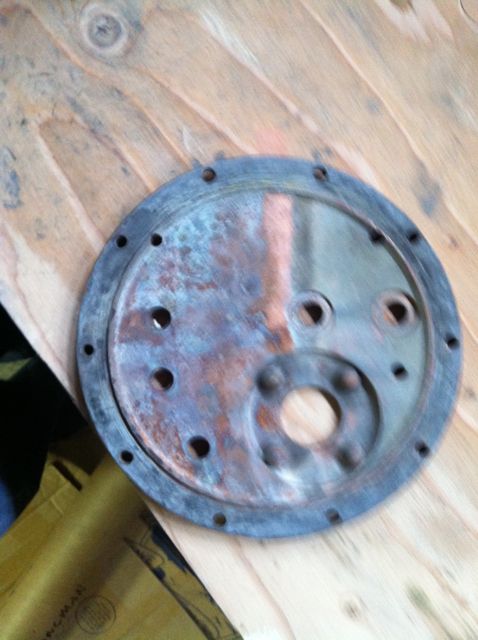 The outside of the front plate didn't have as much crud but still had a layer to get through. Here's how it looked when I started with a large wire brush. 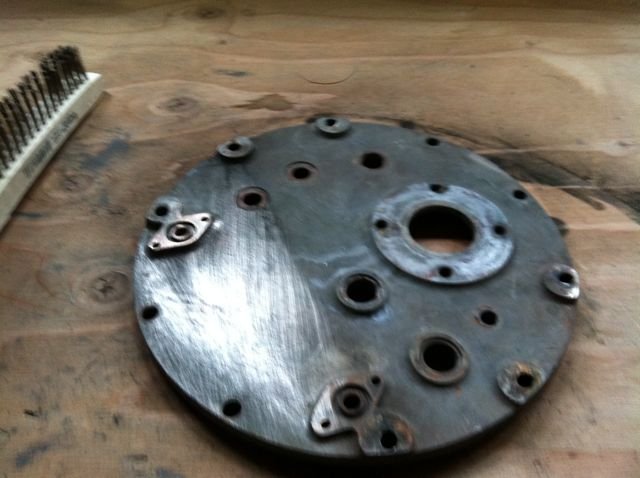 And after completing that step. 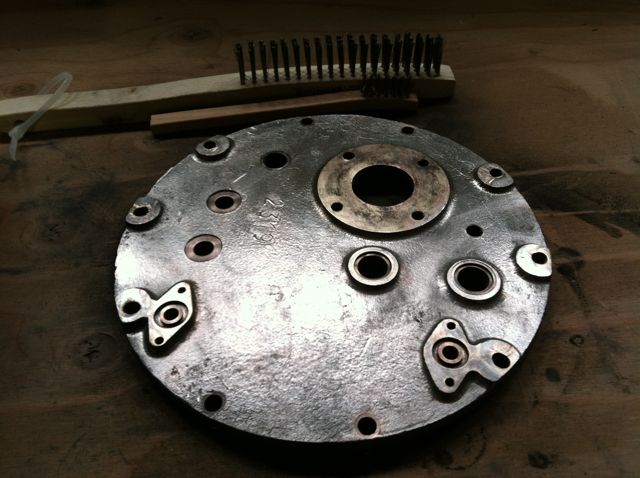 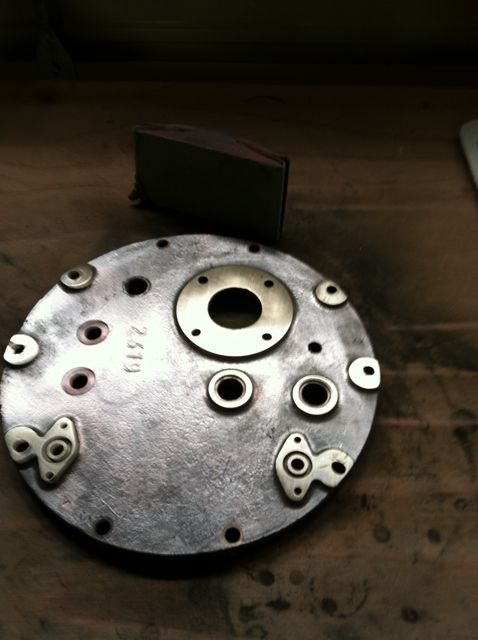 I tried to clean up the inside of the boiler bowl by hand with a large wire brush. 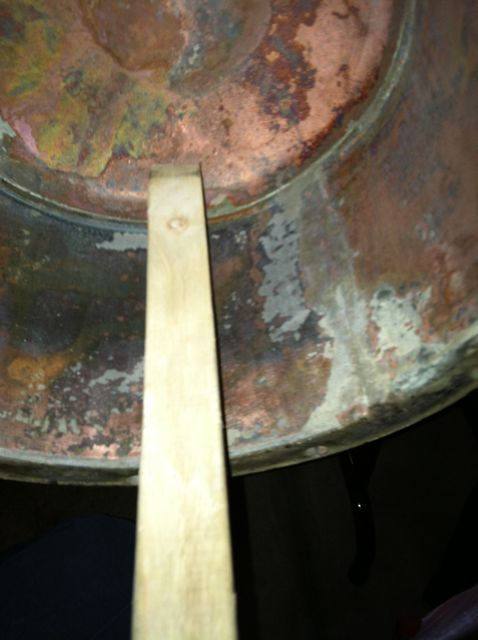 This was slow going, so I switched to a wire brush on a drill, starting with the deepest inside surface. 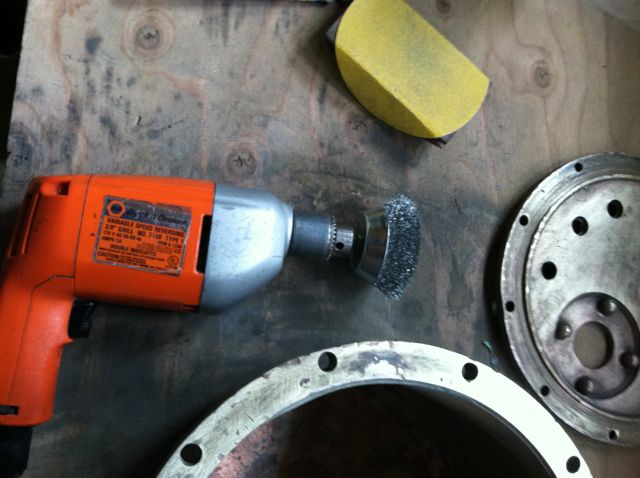 Then I found I could drag the same brush against the sides and quickly removed most of the remaining crud. I figured anything that's left isn't likely to dissolve quickly anyway and get into coffee brewing. This took all of about 10 minutes. 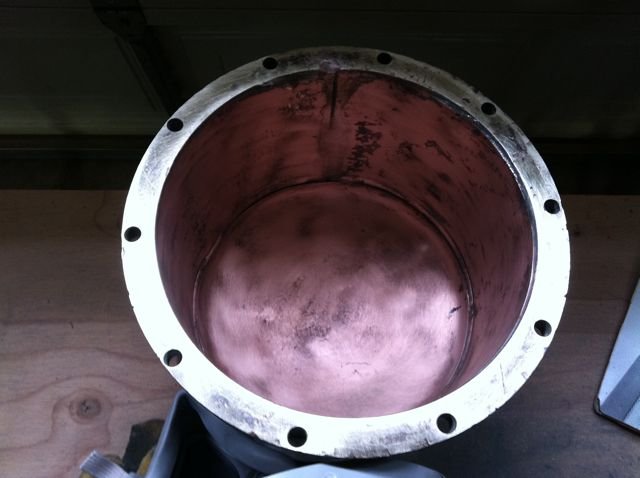 I used the hand wire brush to do the outside, which didn't take long. This served the functional purpose of being able to inspect the dent on the boiler from the outside as well as inside. With a close visual inspection it was clear the metal is still intact and unbroken. 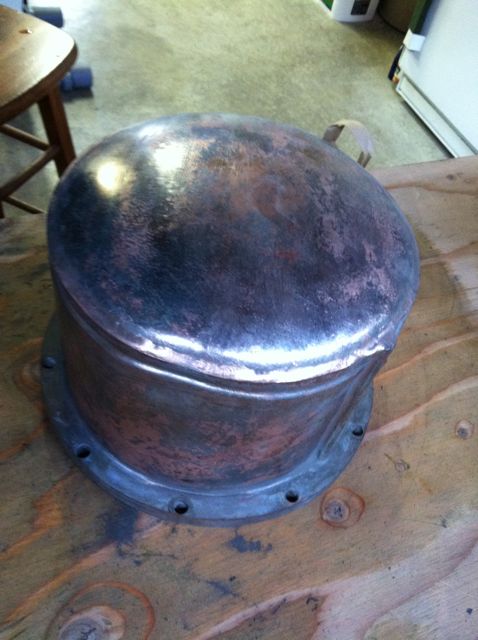 The outside of the boiler looks like it was originally plated. Removing the crud and the residue from glued on insulation revealed the bronze underneath. 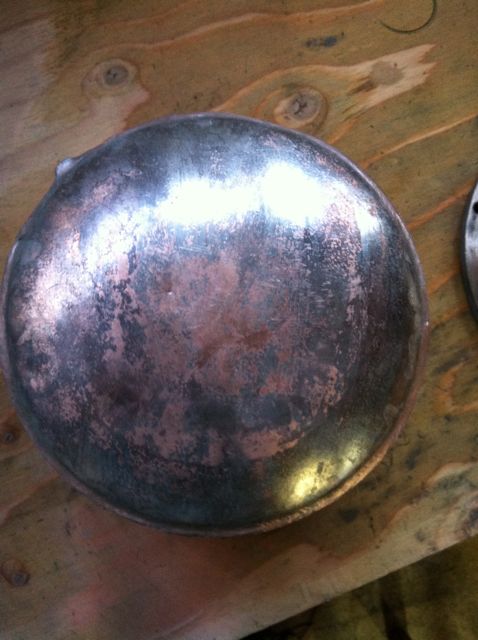 These clean-up procedures raised a lot of dust, so I used a breathing filter and a facemask. If the drill had slipped I could have seriously ripped some skin, so I wore thick welder's gloves. 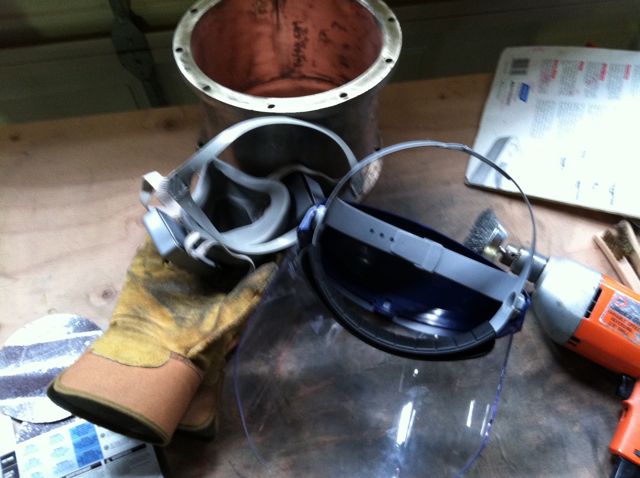 My next step is to apply stamp pad ink to the boiler gasket surface and print that onto my sheet of gasket material to guide the custom cutting of a boiler gasket.
Gary
LMWDP#308

This part seems easy but it turned out to be little tricky. My plan was to apply stamp pad ink to the boiler gasket surface, press the boiler onto a sheet of gasket material and end up with an imprint for cutting the gasket. The reasoning behind using stamp pad ink is that it stays wet for awhile and is pretty thick. On the first few tries I didn't apply enough ink, had to wipe off the sheet and start over. It didn't help that the sheet is shiny so it doesn't easily take an imprint. Instead the ink tends to pool a bit on the surface. On the fourth try I was successful enough that I'll be able to see where I need to cut.

Here's the gasket material, some high temperature rubber obtained from McMaster-Carr for $27. 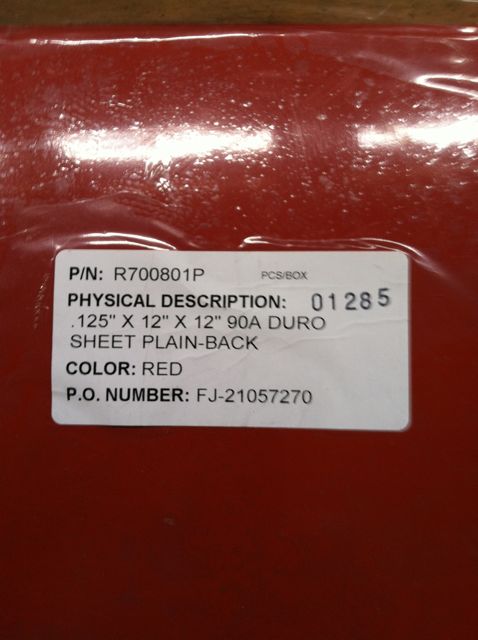 This is the stamp pad ink I used. It cleans up easily using Isopropyl (rubbing) alcohol. 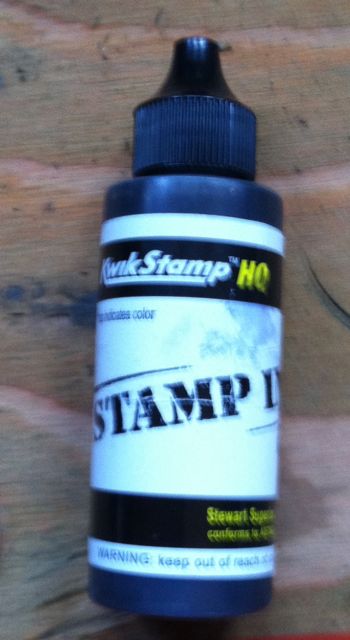 What's nice about a boiler this size is I'll have lots of gasket material left over. The ruler shows the size of this thing. 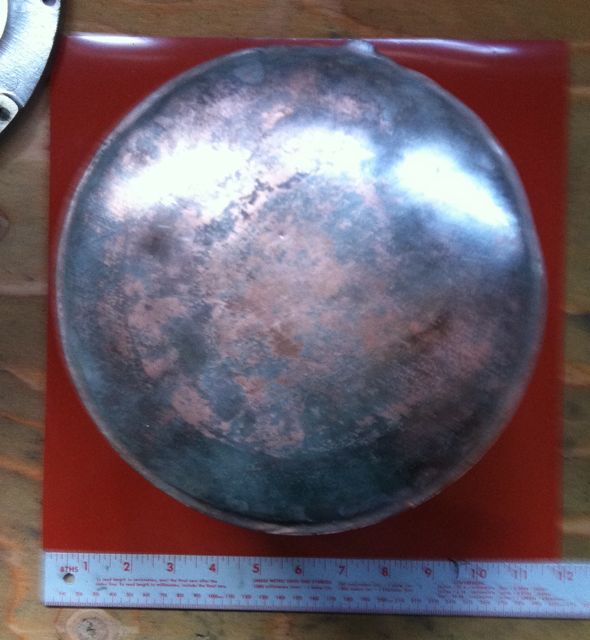 Here's the stencil I made. Now I'll let it dry before cutting. I'm thinking of using a drill to cut out the bolt holes and will try that on a corner of the sheet first. Otherwise I may need to find a hole punch in the right size. 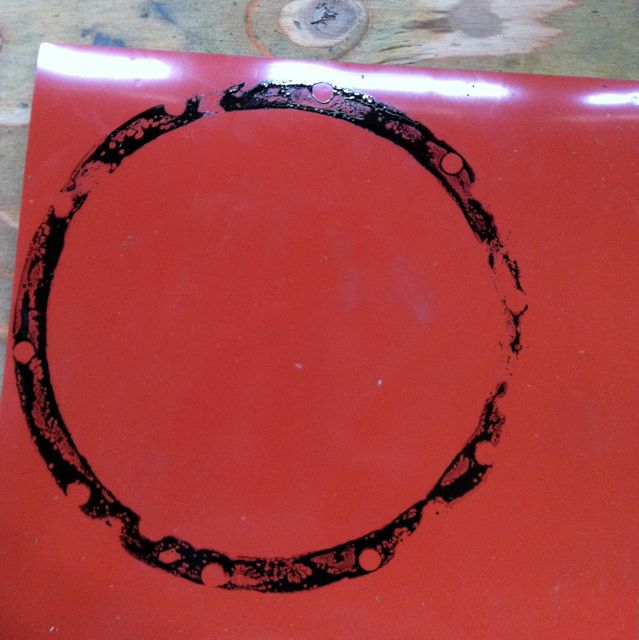 Looking good! I love the look of that inner side of the front plate of the boiler. It looks like a fine swiss watch movement.
Top

Where do you buy that Elbow Grease? You sure are using a lot of it!! Looking beautiful Gary.......Keep up the good work!
LMWDP #347
Top

One of the goals of this thread is to show the mistakes I'm making as well as successes so beginning restorers like me don't need to make the same errors.

Well, I made the gasket stencil all right and then screwed up cutting it. I left extra room on the outside (good) and followed the same pattern on the inside (oops -- see near the bottom). I think next time I'll invert the boiler on the gasket to cut the outside edge at least. Here's how that looks. 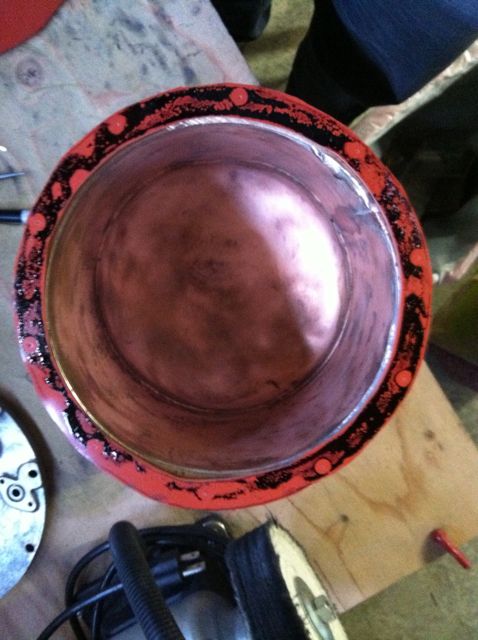 The hard rubber sheet I bought at McMaster Carr was $27! I found one that looks similar on eBay but don't know how to decipher the specs (Silicone Rubber Sheet 1/8" x 12" x 12" Smooth ZZ-R-765 Grd 70). The gasket I ruined is probably harder and is graded 90 (see the photo just earlier). Maybe someone can comment on it. It sells for only $11 shipped and I'll probably need a do-over.

Added later: "Measure twice, cut once." When I re-cut I'll position the boiler over the basket sheet and mark that. Then I'll measure the width of the gasket surface on the boiler. Next I'll place a pushpin in the middle of the marked circle, attach a string to that and to my pen and will then create a perfect circle of the right diameter or use a pot cover or something like it as a guide. I'll use scissors to cut the rubber and a punch for the holes. The Garrotts told me that it's harder to cut a gasket from Teflon and that doing so usually requires something heavier duty than a hobby knife or scissors. They use a "heavy duty circle cutting tool."

One thing I did right was document the teardown in high resolution photos. Yesterday I was zooming in on them to review the wiring and how the parts and bolts went together. I started by drawing a diagram that shows the basic layout of what attaches to the front of the boiler. Here's that drawing: 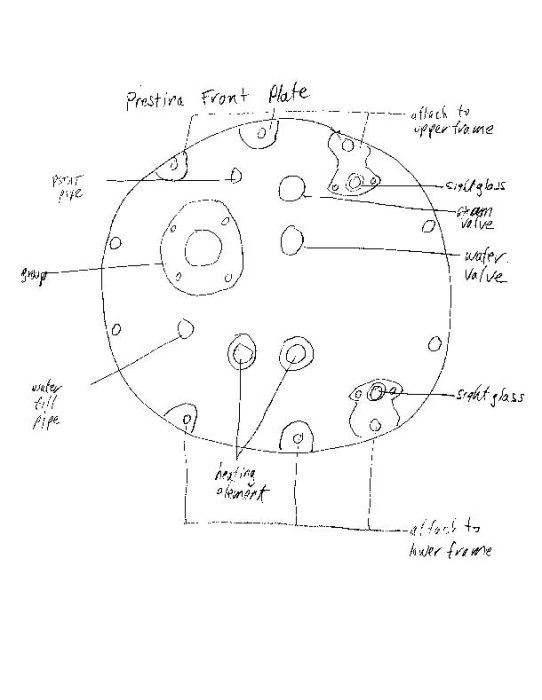 I then copy and annotate that image to direct me in reattaching parts. Here's the start of annotating how the bolts were fastened on it. 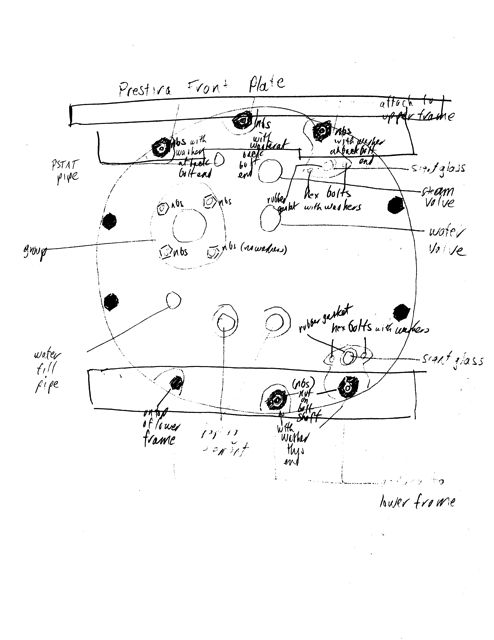 There's something very pleasing about figuring out reassembly.
Gary
LMWDP#308