Thanks, Dave. You're the acknowledged expert on this. 100 hours to get to mirror? That has me reconsidering jeweling/swirling or going to a brushed steel look until I can afford chrome plating because this Prestina has about 6 separate flat surfaces -- especially if you mean 100/panel. If one were to go for a mirror finish, how slow do you recommend buffing? My DeWalt buffer/polisher has a setting from 0 - 600 rpm controlled by a variable speed trigger. I believe you when you say my 6 inch Ryobi bench grinder is too fast. The specs say 3600 rpm. What goes wrong with those? And thanks for suggesting micromesh. No one before had mentioned that.

A stopgap is to see how well I can do with some touch up sanding, steel wool/rubbing compound and buffing so it isn't a perfect mirror but is presentable until a later chrome or polish. Am tempted to try along those lines without getting to "mirror." Having cannonfodder tell us there aren't shortcuts to a mirror polish means that's most probably true, at least short of buying gear that's worth as much as the machine at this point.

Later add: Paul Pratt is posting a great restoration thread where he shows how to polish a steel panel by machine. Who knows if this is the traditional way because he's self-taught, but his method apparently works. It involves using a high-torque 1 HP electric motor, leaning hard into it and backing the panels with wood so they don't get distorted. Here's the link to that discussion: Gaggia Orione restoration
Gary
LMWDP#308

In the following thread, perhaps referenced earlier in this one, Dave (Cannonfodder) states 1800rpm as a slowish speed. If one is considering polishing stainless steel panels, then they should definitely read this page, and look at the earlier posts in the thread.

At this point, I've decided I'd rather have a nice-looking, working Prestina than one where I can shave by using any panel as a mirror. Using 100 grit sandpaper on a block and sanding carefully lengthwise, I'm taking out the deep scratches and creating a very presentable, brushed steel look. Hey, it comes down to this. I want to be pulling shots on my Prestina by Christmas or New Year's or whenever (soon, I hope). Photos to be posted in a bit. Here they are (added later). The first is the cup tray after sanding out the deepest scratches with the DeWalt polisher but before sanding for a brushed finish. The second shows the brushed finish 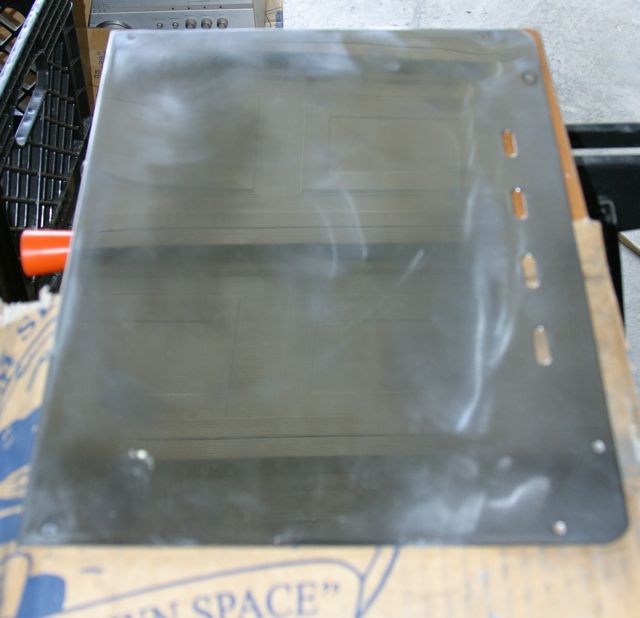 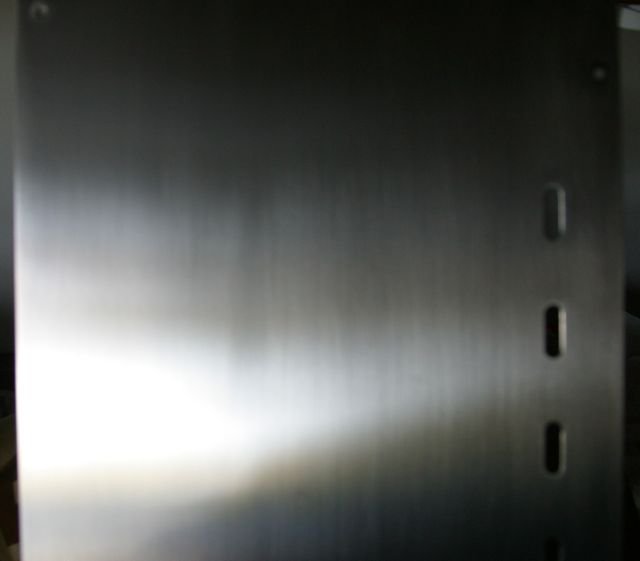 If I later decide to chrome plate, it'll be cheaper than my time is worth polishing it down by hand since it takes me about 20 minutes each pass to polish a panel down to the current level of grit by hand. Per Dave's instructions that would be at least 8 to 10 passes per surface at 20 minutes each = about 3 hours or more X 6 = about 2 to 3 days solid. I'll bet that's an under-estimate if he says I should expect about 100 hours to mirror perfection. And I don't want to incur a repetitive stress injury since this can't be done by any machine I have.
Gary
LMWDP#308

Polishing those panels can be tricky all right

A brushed finish saves a lot of time and is generally easier to maintain.

Yup, problem with a mirror finish, every little blemish will stand out. If you chrome plate it will still need to be reasonable smooth, otherwise you will just get chrome plated scratches.
Dave Stephens
Top

How smooth would you take it to chrome plate, to what level of grit? I've added before and after images to my prior post today, including the brushed finish using 100 grit to eliminate the remaining random scratches.
Gary
LMWDP#308

You would have to ask the chrome plater. I would imagine no higher than 800 but your plater could recommend somthing much lower, or higher.
Dave Stephens
Top

Sorry to come in late on this and I hope this hasn't been brought up before.

I had my Conti Princess Conti Lever - What year & which model ? polished by professionals. They charged me $300 and that included all the the fiddly brass bits.
I can't even estimate how long it would have taken me if I'd done it myself, but many many hours which I didn't have. They also did a better job than I could have done.

I don't know about where you live but a quick search of our local ( Melbourne Australia - 4 million population ) phone directory turned up 67 metal polishers.

It seems to me that if you are thinking that you might get the panels chromed later on then professional polishing saves you the work and also the cost of chroming.
John
John
Top

A late reply to John, (really late, 1/30/12), I've been thinking about how to finish cleaning up the parts, searched this huge HB site, and found a recommendation to add ultrasonics to my cleaning routine. This is for all those "brass fiddly bits" I'd been contemplating.

Jeff Kletsky (aka "Jeff" on HB) suggests buying an ultrasonic cleaner, and they're well under $100 U.S. He suggests this one: http://www.amazon.com/iSonic%C2%AE-Ultr ... ewpoints=1 plus some cleaning fluid.

Jeff's post also led me to a very helpful summary of how to plan a restoration on Paul Pratt's vintage site: http://www.espresso-restorations.com/Schedule.html

My current plan is to finish brushing the steel panels over the next couple of weeks while planning final parts cleaning and reassembly/cleaning in stages. For instance the lever assembly with spring will be tricky. I'll have to reassemble and remount the group and reinsert the lever before mostly releasing the spring and will probably need to create a jig to safely uncompress the spring and disassemble, clean and reassemble. I'm not sure if leaving the lever locked in the closed position for this very long time will have damaged resilience of the spring. If so I understand they aren't expensive to replace. Not quite sure how to test it -- how long it was originally when uncompressed.
Gary
LMWDP#308

In regard of changing the spring, maybe this thread I just started might be of help: Replacing spring in commercial lever group

Good luck with your Conti, they sure are some darlings!

Ulrik
Top
← Back •
By accessing this site, you agree to the site's terms of service. If you need help with the site, please contact us.