Nothing fancy, my wife's VW Jetta -- I wish I could say it was the Shelby Cobra convertible that passed us on our afternoon walk. And the steel plate, of course, is the back panel of the Prestina.
Gary
LMWDP#308

RayJohns gave me some tips off line to try polishing by hand, starting with 600 wet/dry sandpaper and wetting it to clean and lubricate, then going to 1500, then 2000 grit before trying Blue Magic metal polishing cream. He says if I use a buffing wheel with buffing compound, go easy on the compound, and don't underestimate the potential of hand polishing, which may give better results.

Looks like you are off to a good start there!

Typically you can achieve pretty nice results if you go from the 2000 grit to the blue magic. If you get one of those circular buffing wheels and a little grinder (like the Dewalt one, etc.), that can give pretty good results. However, you can also do quite a good job using the blue magic and a paper towel. With the blue magic, the trick is to put it on and polish until you see black building up. Keep polishing with the black on the towel for a while, then once you get a good polish going, switch to a clean towel and polish away until the black disappears. Then wash with soap and water. If you want a really high shine, you can also polish with a plexiglass polishing compound (sold at AutoZone usually).

I've seen guys polish aluminum car rims by hand with that blue magic stuff and the end result looks like they were chromed!

Today our "famous Italian coffee machine collector" Lucio (lvx) sent his latest blog and has a section on polishing, where he shows lots of products. Thank you Lucio, here's the link: http://caffettiere.blogspot.com/2011/10/lucidare.html
Gary
LMWDP#308

I did some more polishing today, this time on the scratched back portion of the case for my Isomac Amica. I used 80 grit to try and bottom out the deep scratches there. This is hard to photograph. Here's a before photo of the whole case (or most of it): 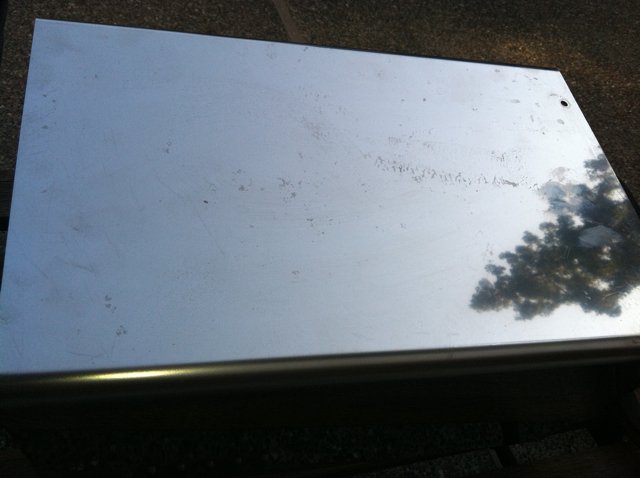 This is a close-up from the far right of that photo. It still doesn't show how unsightly and scraggly those scratches are. I put them there over a year ago when I made the mistake of lying the case down on concrete patio paving stones. I didn't realize stainless steel can scratch so easily. 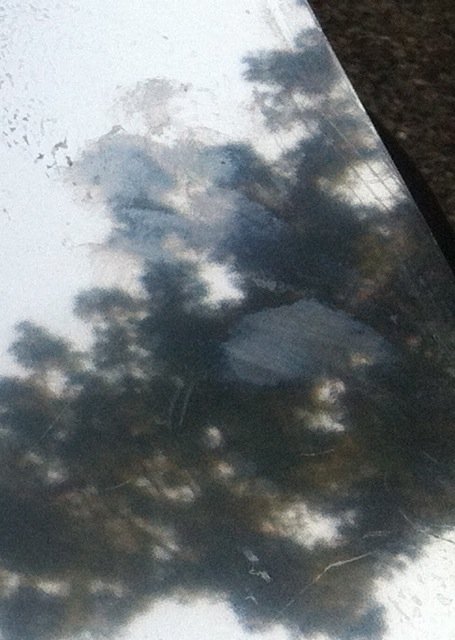 I spent about an hour today bearing down with 80 grit sandpaper on a block to try and grind out those scratches. I'm almost there. Here's the result with the panel back on the machine so I can use it. Again, this is hard to photograph. The case actually looks like pretty smooth brushed steel. The highlights are an artifact of lighting. Notice the difference between the mirror finish on the side and the brushed look on the back. 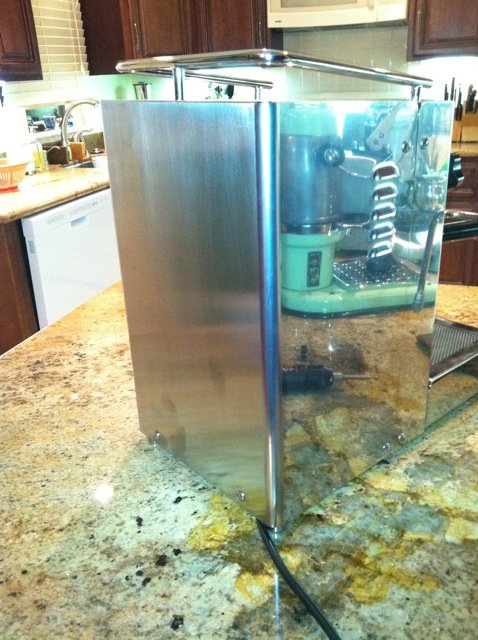 I plan to polish it out some more soon, maybe using coarser sandpaper. I'm also thinking of getting a belt sander (any opinions on this?). This is because the first step of the polishing requires taking the metal down past the bottom of the scratches.
Gary
LMWDP#308

Before I would use a belt sander on ANY SURFACE, I would borrow one and test my methodology on a sacrificial example.
Skål,

Thanks Eric. Ray Johns also cautioned me about that type of sander, that it can warp metal and that it might cause more damage than I started with. He's recommending a circular sander again and others have recommended that, one with variable speed. It may be the way I go.
Gary
LMWDP#308

The polishing I've done by hand so far does work, but it would take a very long time. I've just purchased the circular polisher/sander Ray recommended, since there are four machines to polish and many panels that need some serious work. I'll update when I've had a chance to try that out. Here's what I'm getting:

I began polishing today with my new acquisition, a variable speed polisher from DeWalt equipped with hook and loop (Velcro) backed sanding disks. This is a fairly hefty polisher, about 18 inches long. I like that it has a soft start and can operate at very low rpm's controlled by a master switch that tops out at 600 rpm at the lowest setting while actual speed is sensitively controlled with a trigger switch. The tool isn't very noisy and not a lot of dust is raised. When getting a polisher like this, equipping it with sanding disks and buffing pads isn't a slam dunk. It comes with a 7 inch hook and loop polishing pad, but that size is very uncommon. I found a local tool supplier much more well stocked than the home improvement big box stores and was able to buy a 5 inch hook and loop wheel and fabric-backed sanding disks of 100, 220, 400, 600 and 800 grit, plus two soft buffing pads that will be used with buffing compound. But that wheel alone was $20, each sanding disk is $1.50, and artificial soft buffing pads that aren't lamb's wool were $11 each. The ones made of lamb's wool are $23. So costs of doing it this way are adding up. I had seen a scratch be gone kit in a local hardware store for $25, but I want to limit the time this takes, and that kit only yields a brushed steel look. 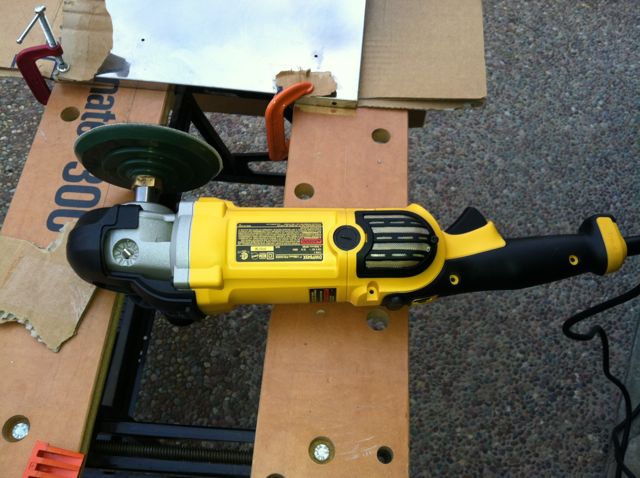 I started with 100 grit to polish out the deepest scratches. Here's the panel surface before starting. Note the deep scratch on the lower left. You can also see where it was scrubbed with abrasive cleaner when you compare the exposed surface with the mirror finish that was protected under a Conti nameplate. 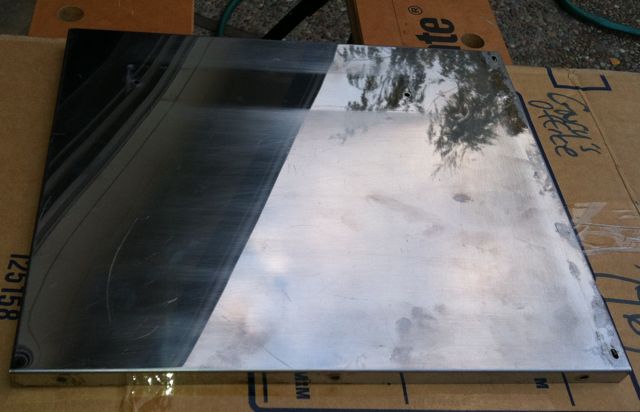 It took some getting used to the polisher, which would want to walk around. I found that drawing it downward the length of the panel made it easier to control as this was cooperating with the direction of rotation. Within 10 minutes I had polished out the deepest scratches and had a brushed look in swirls, but those should polish out. This is the part of the panel where the deep scratch had been. The bottom edge is now to the right in this and the next photo. 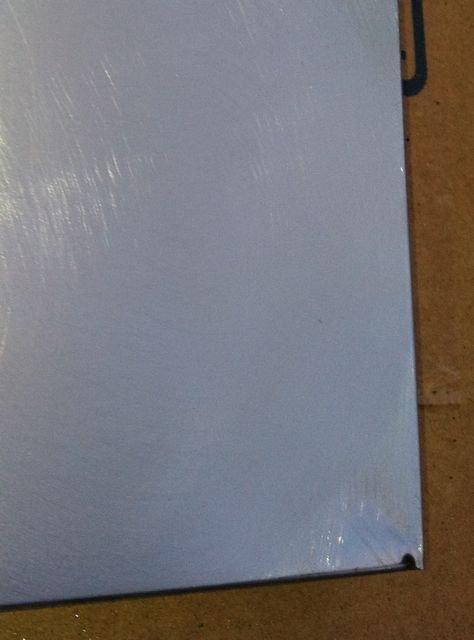 I encountered something unexpected, though. That's why there's nothing like hands-on experience. Polishing the scratch out revealed a fine leather-like grain in the underlying metal itself. This isn't something I'll want in a mirror finish. When I was sanding, the metal became warm but not hot as I was using low rpm and I kept the polisher moving. I'm guessing this is the actual grain of the metal cooling and that a different finishing operation created the mirror finish that eventually got scratched. Maybe someone with knowledge about this property of stainless steel will comment. The photo is a close-up. The actual grain isn't this pronounced, but it is visible. It's as if some of the metal I polished out was softer than this substrate. Perhaps the original steel was plated? 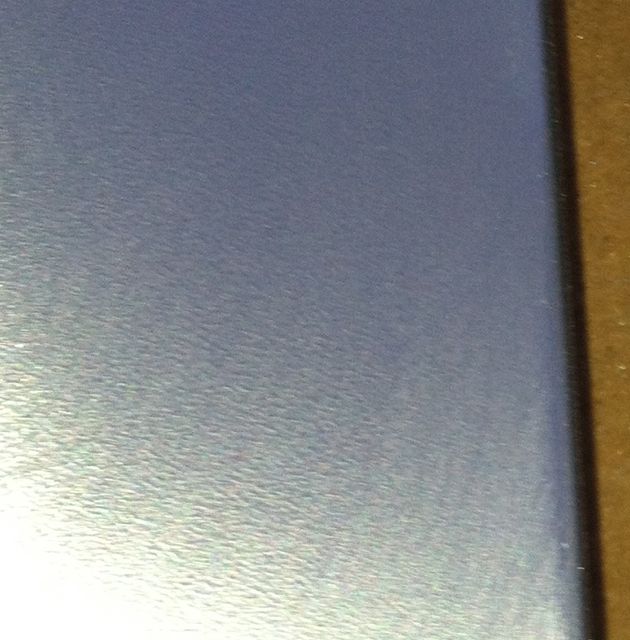 If this doesn't polish out I may go with Ray John's suggestion of creating a brushed swirl pattern, or I may simply created a single direction of brushed steel. But I've just started. Either look would be better than an old mirror finish with random scratches.
Gary
LMWDP#308

That might be due to heat, but I'm not sure. I would think it would polish out with a good metal polish (maybe some white polishing rouge, followed up by some blue magic or something).

There is a lot to be said for using a brushed finish, since it's easier to maintain in a lot of cases. If you don't have any luck polishing to a mirror finish (which I think you should be able to do no problem), then you can apply a brushed finish with a scouring pad. I do that when working with aluminum sometimes.