I have a Sirai in my Prestina and once the machine is fully heated it might switch on and off every 5 minutes. I actually do not mind to click because it has reminded me the machine was on more than once. Not that I would have a problem leaving it on all day, but I would never want to accidentally leave it on and leave the house. With that said, I would be more than interested in hearing about your experience and results if you were to PID yours . . . . It has crossed my mind several times.
Top

Thanks Doug. I think you're saying I won't get it completely silent anyway so it's a matter of deciding whether PID is worth it for that purpose and PID also won't enable automated preheating either? I think I know the clacking sound because my Olympia Coffex does something like that.

I'm excited that you're saying a vacuum breaker will allow preheating with an appliance timer. I really appreciate being able to do that with my Isomac Amica.
Gary
LMWDP#308

On another note, If I were to PID my machine, I'd leave the pressure stat in place as an overpressure safety. Just set it to 1.7 bar and set the PID to keep the temps lower. Then if the PID flakes out or the SSR failed closed, the pressurestat would would open the circuit before the safety valve blows open.
LMWDP #331
Top

Thanks, Allon for your suggestion on the PID. It looks like you all are saying PID may be a good idea. I'll wait for Doug's response too and then will order the needed parts to keep this project moving.

On that note, today I finished drilling out the remaining bolts and seemed to get more of a feel for that. If I was a bit off center early on, I realized I could shift to a larger drill bit and use that for carving my way back to center before bearing straight down. The inspiration for this was the divot created by the initial center punch tap. No need to go all the way where the narrower hole was directed. I think it's a balance, though, where if one can follow the narrower shaft, it takes stress off the next drill bit to avoid breaking it off. Anyway I drilled through five bolts without breaking a bit and used a hacksaw to remove the trashed bolt ends. I then used a rotary tool with heavy duty cutting wheel to grind off the remainder of cut bolts at each hole. Next I used a tapping tool to thread the holes. This was unexpectedly easy and was also an opportunity for finesse. Since I'm not using a drill press for perfect alignment of the holes and threads, I used a grinding point on the rotary tool to straighten out the holes, and then positioning the thread cutter, returning it to vertical if it would start to wobble off. The threader is very hard steel, and I was surprised how easily it tapped each hole. If it would get stuck, instead of forcing things and risking a broken thread cutter obstructing a hole, I would back it out and use the grinding point on the rotary tool to eliminate the obstruction. 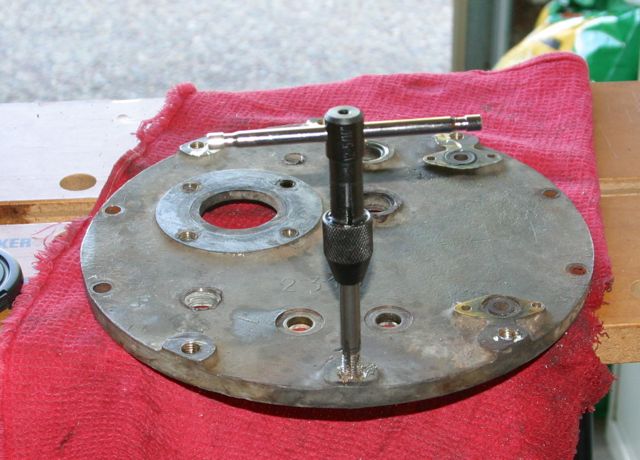 The final touch was to use the grinding point to eliminate any burrs at the edges of each threaded hole. So here's the faceplate front side: 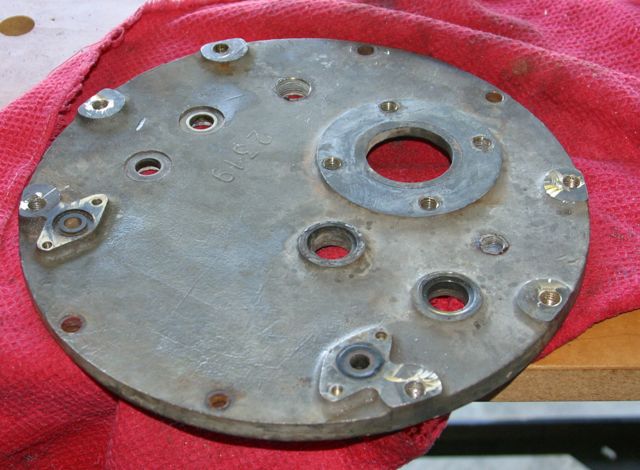 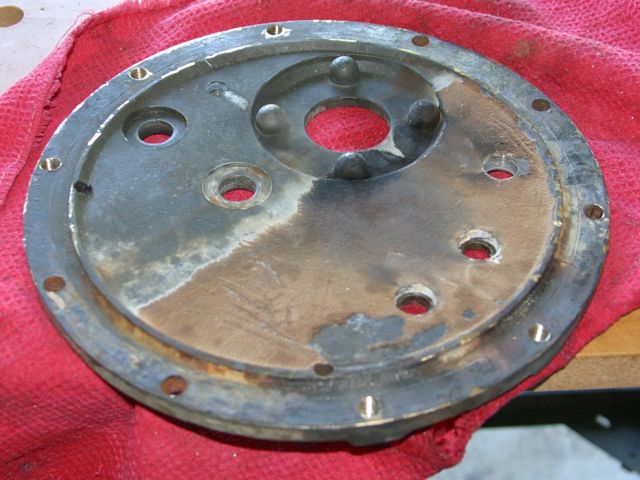 Oops! There was still a rock-hard gasket in there. So I removed it with a picking tool. 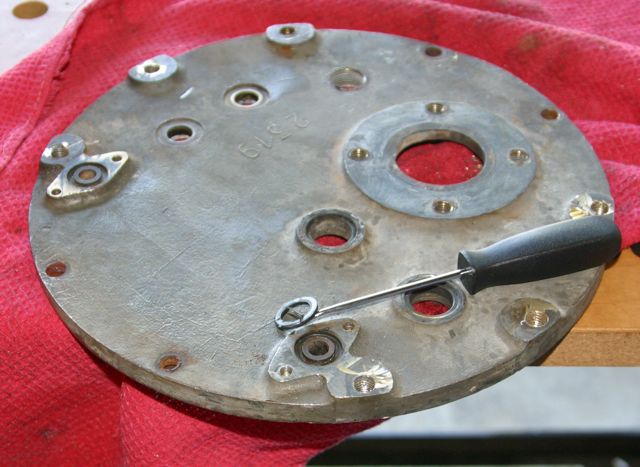 I tested the holes with the remnants of broken bolts, and they screwed in just fine. Now both halves of the boiler are ready for a citric acid bath.

Why did you tap threads into the boiler face plate?
The other holes don't appear to have threads and when you bolt this together the threaded holes will not allow for compression between the faceplate and boiler. I may be missing something obvious here but it is not obvious to me.
Top

zubinpatrick wrote:Why did you tap threads into the boiler face plate?
The other holes don't appear to have threads and when you bolt this together the threaded holes will not allow for compression between the faceplate and boiler. I may be missing something obvious here but it is not obvious to me.


He tapped the holes because thats the way they were originally.

The 3 raised pads at the top and bottom are tapped and had a stud installed. That alows a nut to be put on the front and then the boiler gets installed in the frame.

You could actually bolt the plate onto the frame first if you like and then install the boiler tank after that,

Or to put it another way, that allows you to remove the tank without removing any pipes, wiring, group.

I tapped the holes because they had been tapped before. Those that weren't tapped before are still unthreaded. And thanks, Adam, for explaining why. I didn't know. Monkey see, monkey do!
Gary
LMWDP#308

A pound of citric acid has just arrived. So I needed to take apart the remaining stuck steam and hot water valves. It was pretty straightforward. I put them in the vise, applied the propane torch for about 40 seconds, used a 21 mm wrench and gave it a good yank, and the first nut came off. 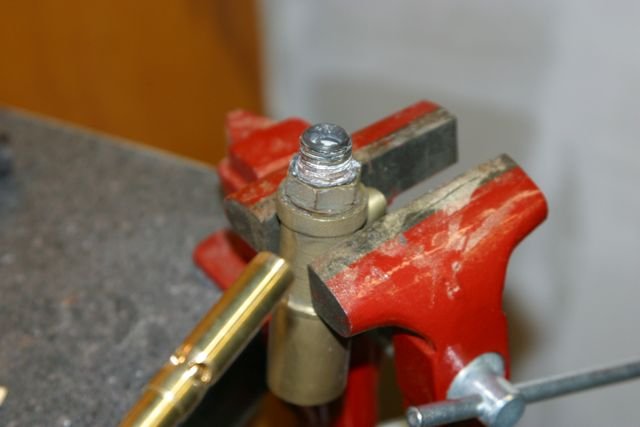 I was surprised to see it wasn't a baked on gasket in between but a brass washer. The second one showed limescale and was a little tougher to get off, so I gave it an extra jolt with a mallet. It too came off undamaged. Whew!

Didn't know if I'd be able to replace it if something broke. 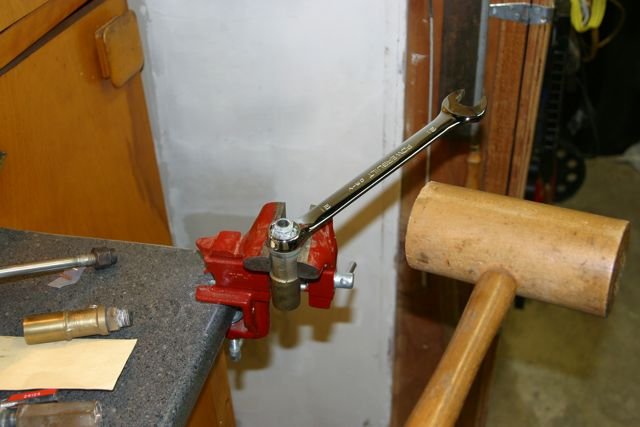 Here are those parts separated and ready for their citric acid bath. 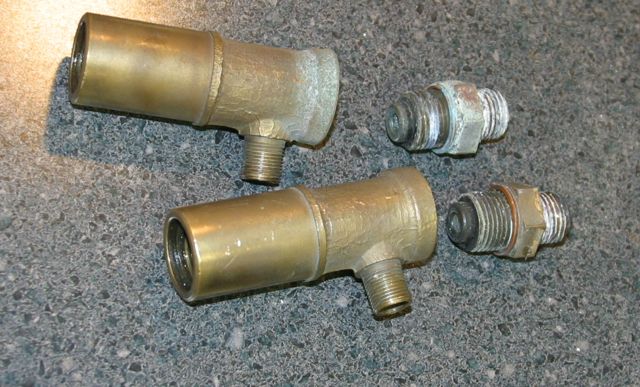 Very nice work Gary. You'll be buying a used Bridgeport before long, at the rate you are going over there

I would suggest that you do tap into the boiler, so that the temperature sensor makes direct contact with the water. Monitoring the temperature by attaching something to the outside wall of the boiler will work also, but you won't have quite as fine grain control over the temperature. There will also tend to be a bit of a lag between the actual water temp and what the PID controller sees, since the metal has to respond to the changes in temperature on account of input from the controller. Also, given the large mass of your boiler, I suspect this situation might be magnified quite a bit.

My recommendation would be to use an RTD sensor, over a thermocouple also. And to use something which makes direct contact with the water inside the boiler - not just the boiler housing. I would use something with a probe also (if possible), that sticks into the water a bit.

What I did was retain the La Pavoni two stage switch. I wired the high circuit in such a manner so that the PID controller is bypassed on the high setting. This allows the heating element to be used at full power (outside of the PID's control), not only to quickly bring the machine up to full operating temperature, but also - in my case - for steaming. The PID controller does still remain on during this time, but this is only so that it can act to monitor the temperature (not actually influence it). Then on the low setting, the PID controller is put back into the control loop (with the relay), which allows it to take back control and trim the temperature back to the target setting again by modulating power to the heating element.

If you are interested, I provided a schematic of my wiring diagram on this thread: