I let the boiler sit in mild descaling solution for 2 1/2 days, then I emptied it out and went to work trying to separate the boiler halves to make it easier to remove the remaining stuck bolts and be able to replace the boiler gasket. I had some success as you'll see. Here are the first tools I used, without heat: 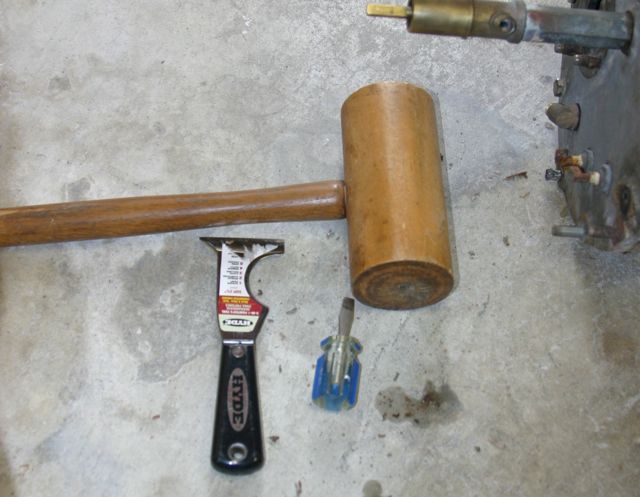 I began by driving a stiff, chisel-headed spatula into the middle of the gasket. Even after days of soaking, most of it was still completely hard with just the edges a bit soggy. Then when I achieved some separation, I started driving in the stubby, flat-head screwdriver to achieve more separation. Here's a close-up of the spatula so you can better see what I was using: 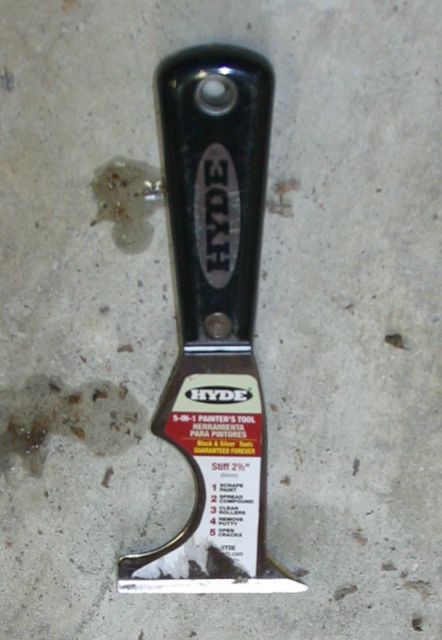 It was slow going. After about an 3/4 hour, I achieved enough separation with the spatula to get to this point: 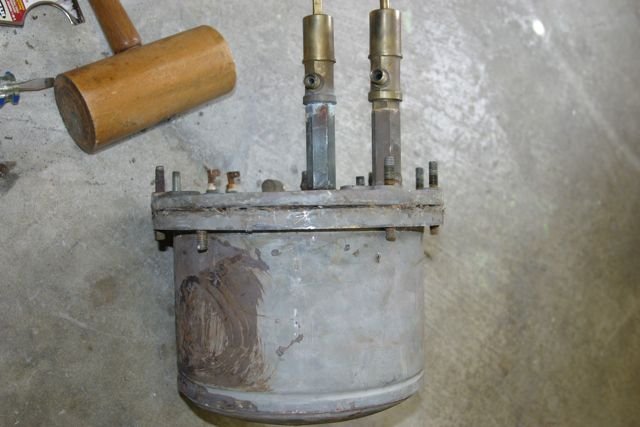 After another 1/2 hour of banging away at the short screwdriver, it got to this point: 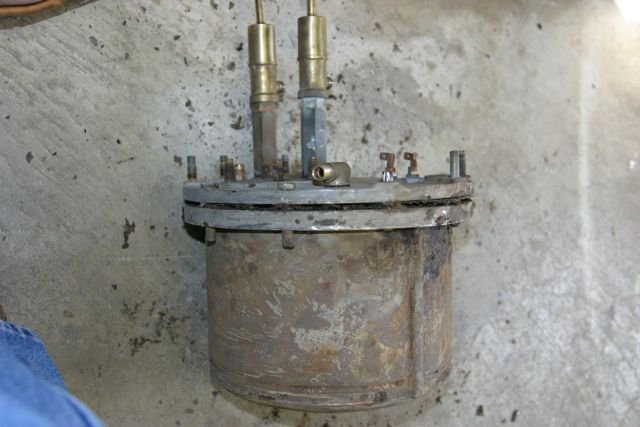 Then another 15 minutes or so driving in a long, thick screwdriver, making sure to miss the heating element: 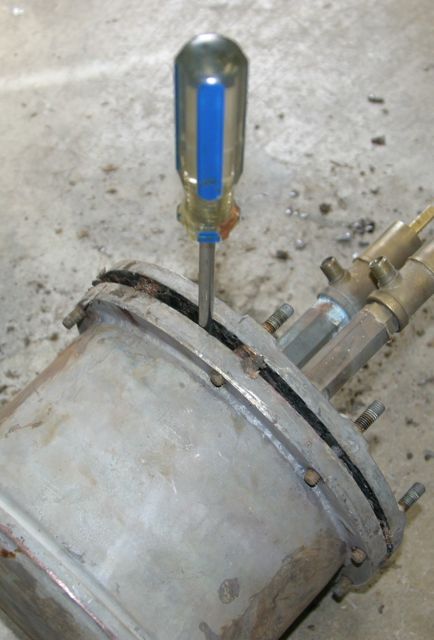 I eventually achieved this level of separation. By now the old fiber gasket was mostly gone. I was still left with stuck bolts, including two with their hex heads still on at the left. I decided to call it a day since tomorrow I expect to take this stubborn boiler to a friend with an oxy-acetylene torch and maybe the equipment to drill out the remain bolts and retap threads. Whew! Happy Mother's Day!

On another thread, Mike replied to this latest post:


Warrior372 wrote:Those bolts you refer to are most likely threaded on both ends. I ran into some while rebuilding my Prestina, and this must have been something they integrated into the later two piece group Prestina's. Anyway, a local screw store will know exactly what they are. Take those vice pliers, clamp them on as tight as you physically can and then start tapping the handle with a rubber mallet.

I think I'll wait until I've got an extra pair of hands and more tools to unstick those bolts tomorrow. Your stubby screwdriver suggestion was very helpful because it was the in-between step needed to get more separation, and because it's stubby, there was no danger of running into and breaking any parts inside the boiler.
Gary
LMWDP#308

drgary wrote:Other than changing its looks to bleached blonde, what will that do that's different than descaling solution? I'm asking this so the thread can be educational to others on this journey.

Probably not much difference.

Nice job on getting the two halves separated Gary.

At this point, I think I would use a saw and/or die grinder to cut the bolts and free the halves (if you weren't planning on doing that already).

Be careful with the welding torch. That's a lot of heat when you start mixing in O2

Thanks, Ray. I'll let my friend with the welding torch use it with skill, and of course I don't want to melt anything or make the brass brittle by overheating. The plan was to heat the bolts red hot and/or add something to grab onto them with and try and turn them, but I don't know if that's what we'll do now that the boiler is in its current state. If I do cut the bolts and he doesn't have his drill press available anymore (was going to sell it last week), I may just take it to a machine shop and have them drill the bolts out and rethread the holes. I think by then I'll have done everything possible to try and free them short of drilling them out.

Is the boiler brass? It looks like aluminum in the photos.

I don't have a huge amount of experience with brass. But any time you have to dissimilar metals threaded into each other (and you apply a lot of heat), you need to watch out. This is especially true of stainless into mild steel. If you aren't careful, you can end up fusing the two for life (just about). Brass might not be as touchy, but I would be careful about just hitting the steel bolts with a lot of heat, since the steel might be fine, but you might be melting the major diameter area of the brass threads right into the hot steel - in other words, internally, if you aren't careful, you can end up brazing the bolt into the threaded hole.

A little heat is okay, but a welding torch can apply a lot of heat fast. I grew up welding with gas and those outfits (when you toss the oxygen into the mix) are designed to put a lot of heat into the mix so you can quickly melt steel and weld.

Thanks, Ray. Have you been following the thread where Jay is trying his bolt extraction on his machine first? If not, it's here: Conti Monaco Restoration. You might have some good ideas for him.
Gary
LMWDP#308

I haven't been following that one too closely, but I'll check it out. Thanks!