Oof.. Some progress, but I still have a lot of work to do.

I looked more closely at the pump small inner o-ring (labelled "o-ring" in Breville BES830XL with flow problems), and while it wasn't hardened, it was easy to slip it on/off the piston (which you suggested was a bad sign). I took a trip to the local hardware store and got a replacement (https://www.canadiantire.ca/en/pdp/hill ... 9794p.html, 5/16" x 3/16" x 1/16" - $0.79) and put the pump back together. It's a little tighter than the original, maybe due to imperial vs metric dimensions, but it doesn't seem to affect the operation of the pump. The pump behaved much better! Consistent flow on the "hot water" setting, and consistent steam.

However, the extraction (group head) was still very erratic. Loud buzzing noise, irregular flow. Now that I could consistently pull fluid into the machine, I fed in a solution of 1 part vinegar 1 part water, left overnight, and flushed it out. No noticeable improvement but no worsening either.

I started looking at the group head from the exterior. First, the dispersion screen and head gasket. Oh boy, they were gross! 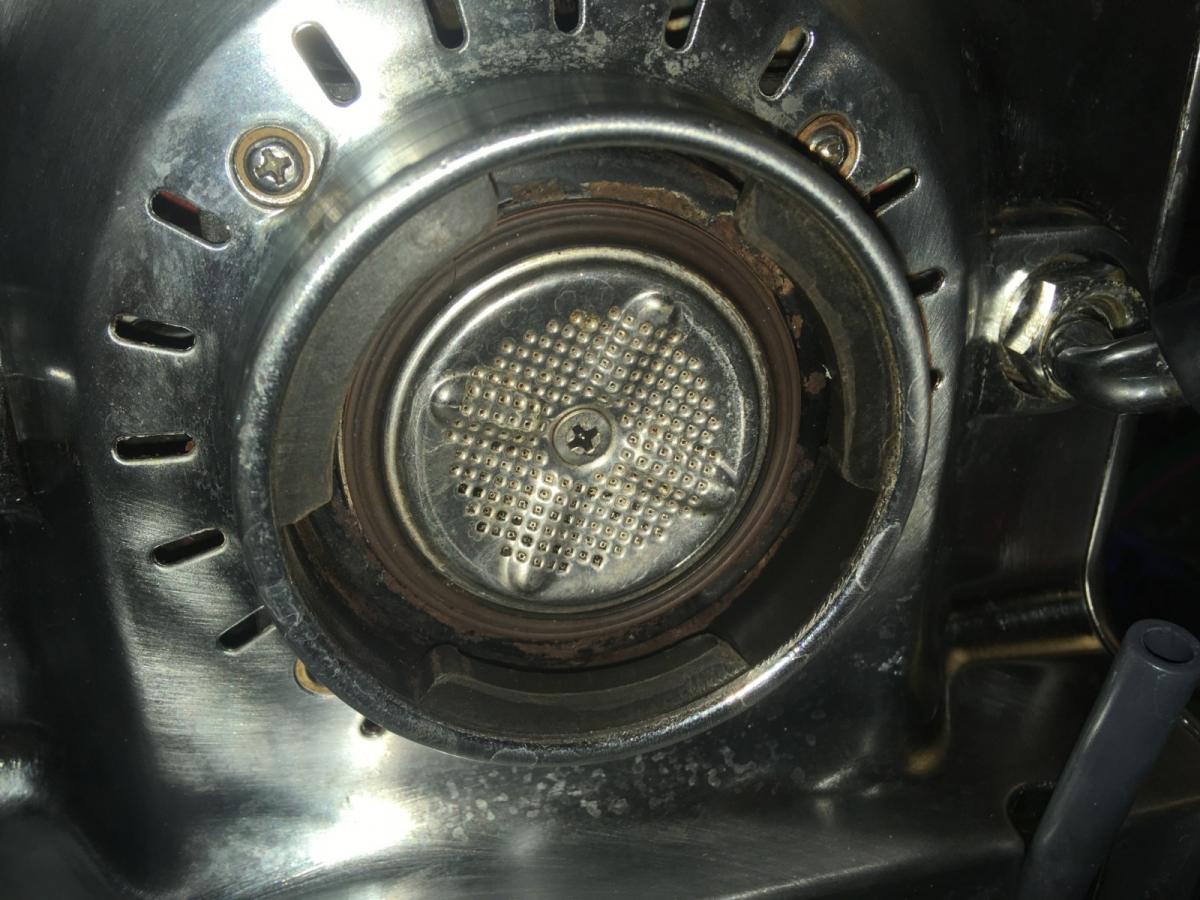 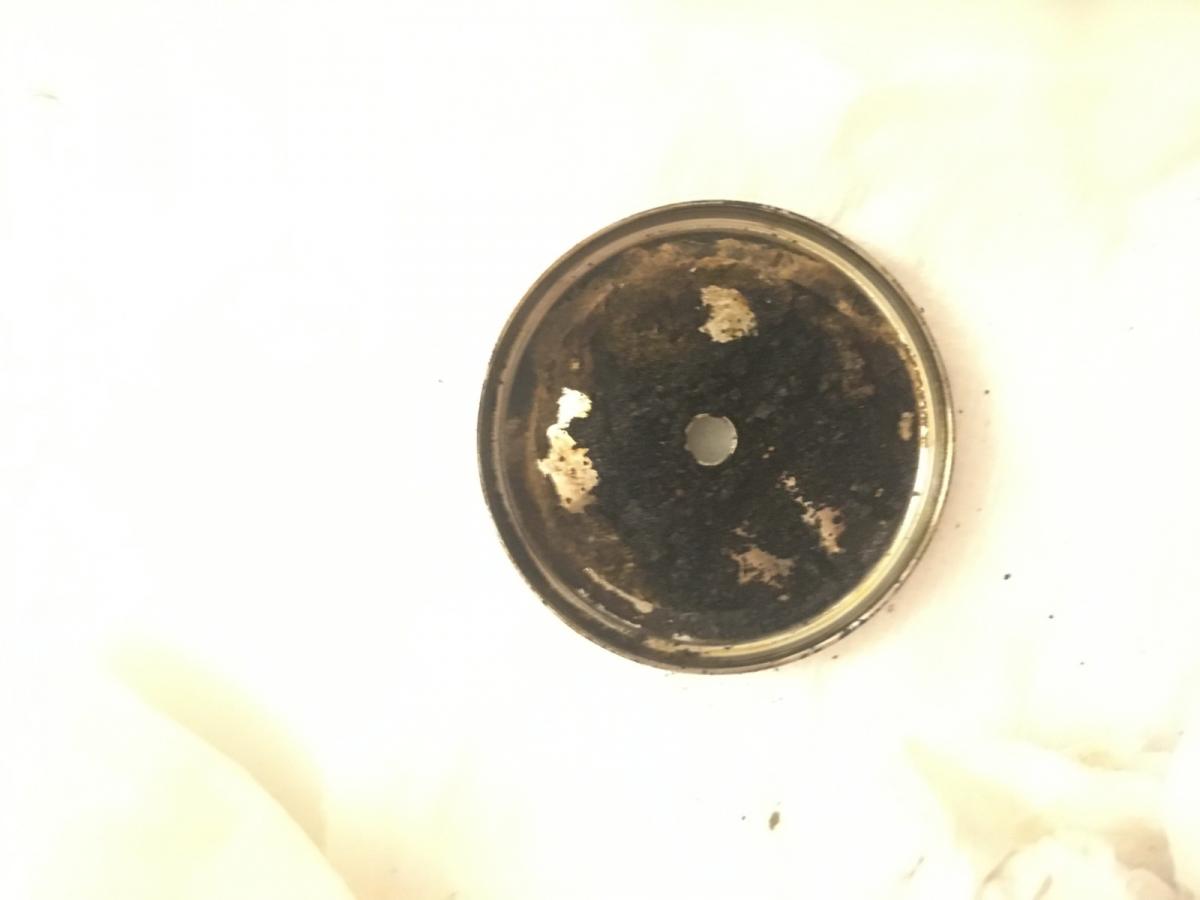 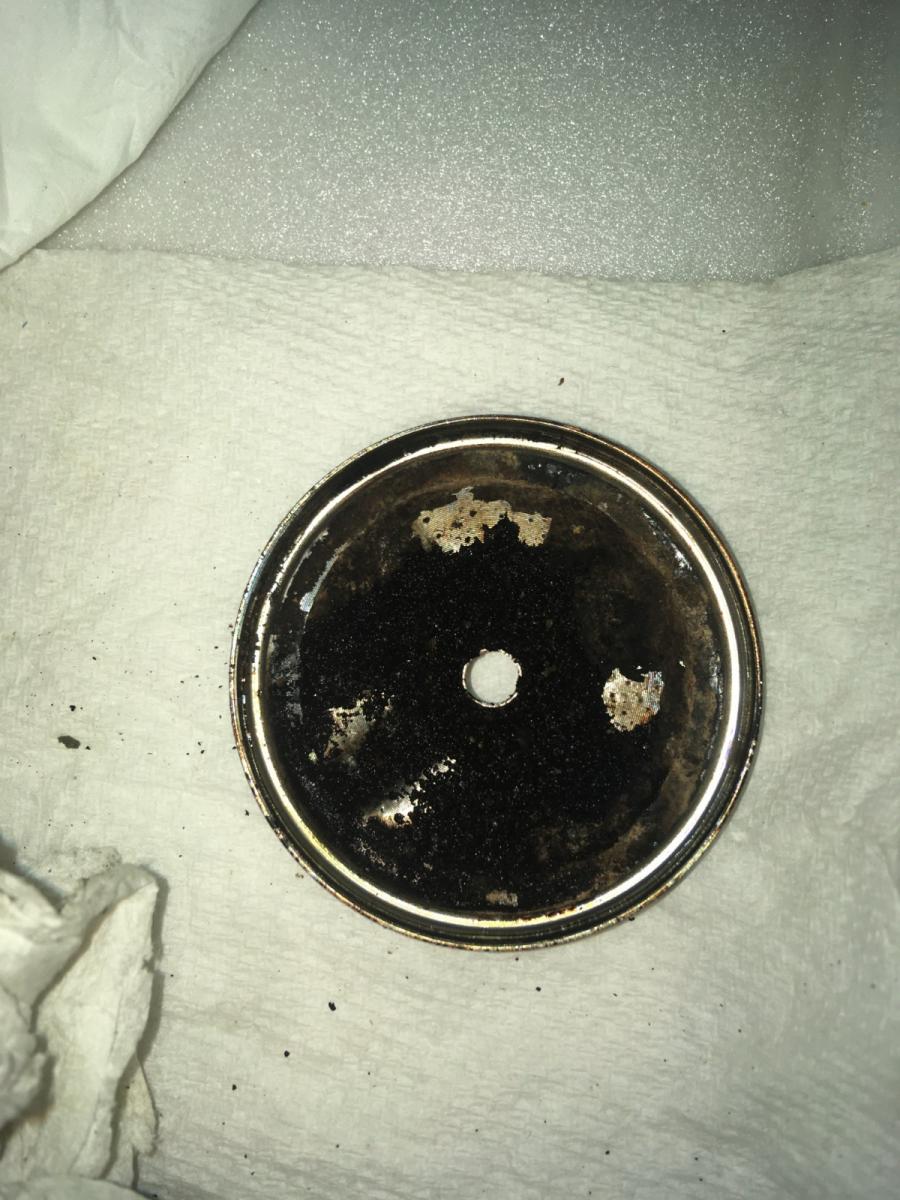 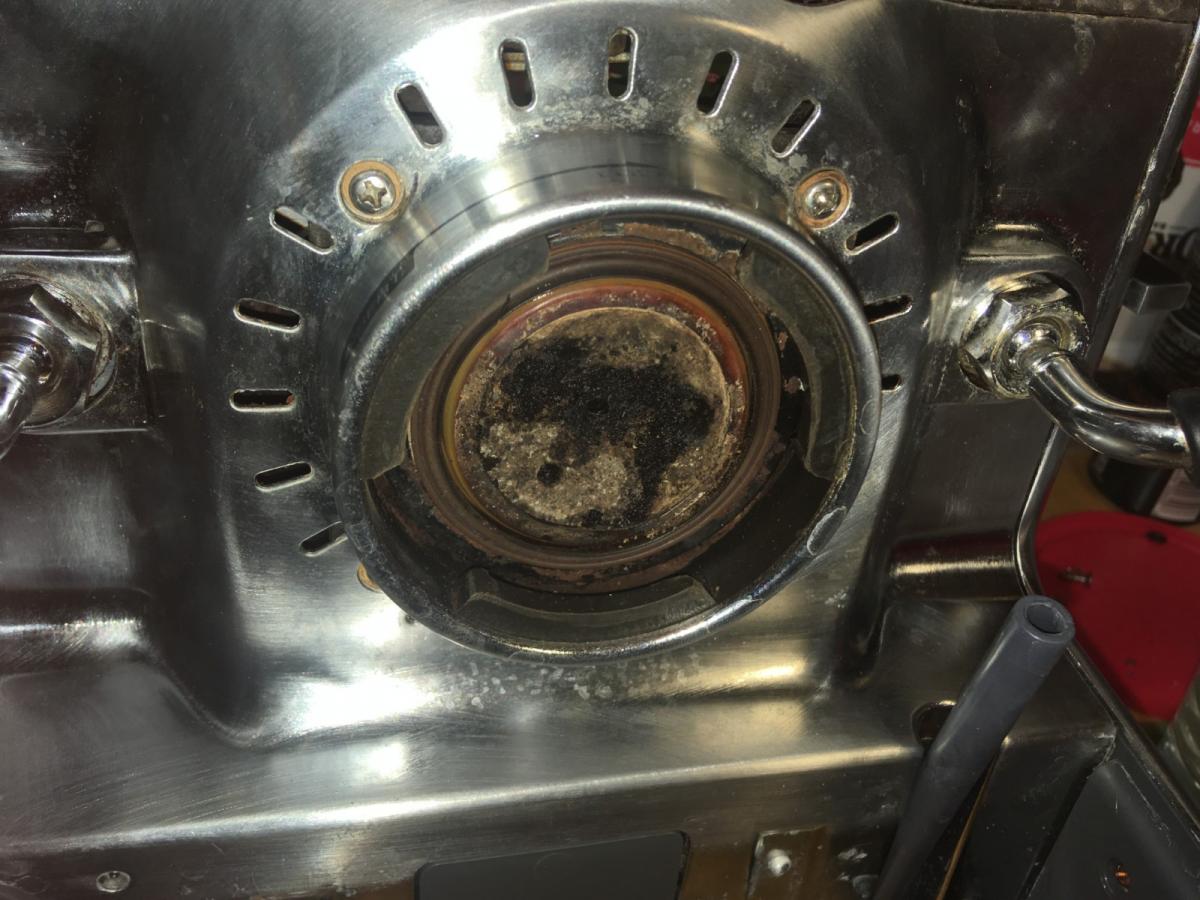 Cleaned these mechanically, then with dish soap and water. Dispersion screen looks much better, but the gasket is clearly cracked. It seems relatively easy to replace and inexpensive, though.

The group head bulk was also covered in dried and burnt grounds, after a vigorous scraping with a soft wooden tool (chopstick), it looks like this: 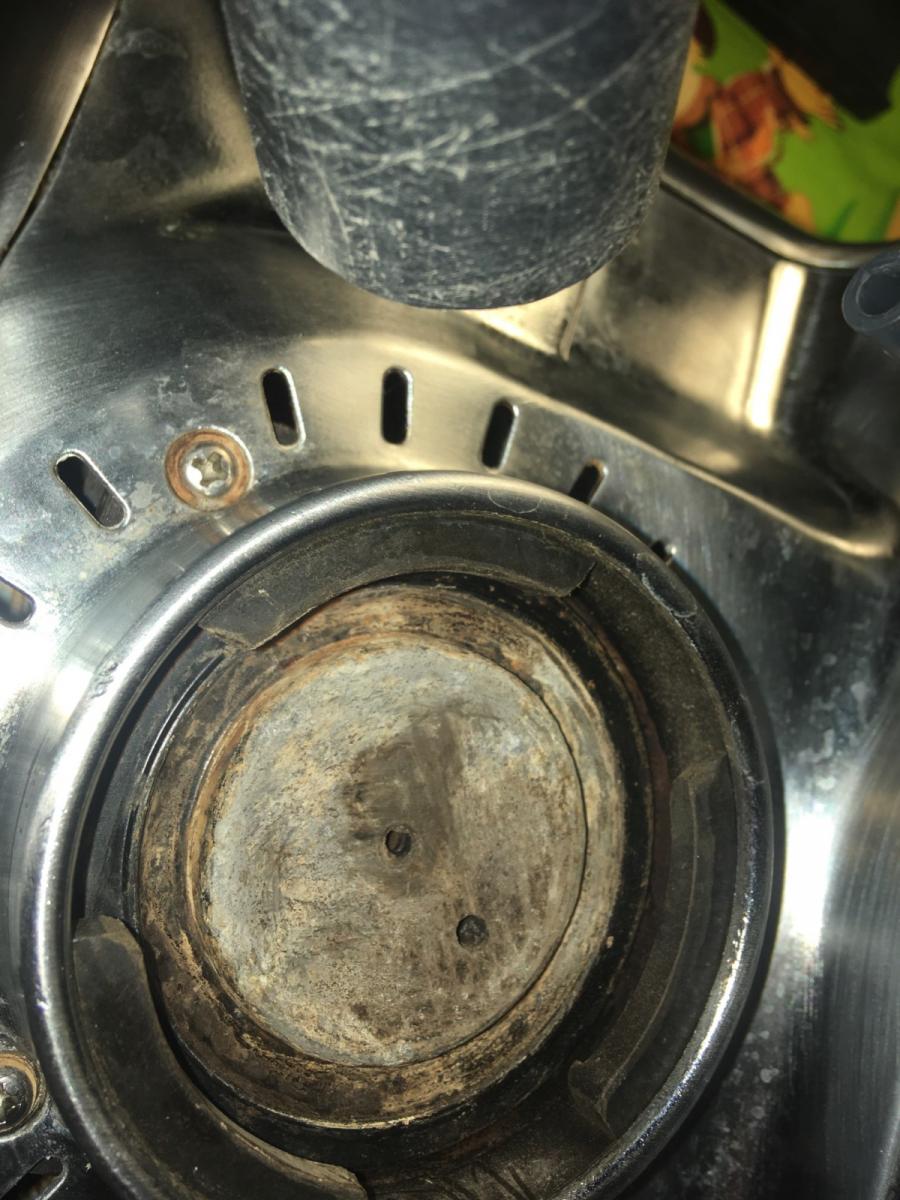 I think I can actually see small dimples in the group head bulk, I suppose where entire chunks of it corroded and flaked off.

Ran the machine this way, and the water flow through the group head was still irregular. The overall flow diagram is something like:
Since the hot water/steam setting were behaving somewhat reasonable, I figured the problem must be in the thermoblock/group head assembly. This is the large metal bulk in the center of the machine.

There is not too much information about thermoblock internals (they seem to have been a short lived design, quickly replaced by thermocoils), but this video does give some basics: It turned out my thermoblock also looks very similar to this one:
https://siber-sonic.com/appliance/800thermalblock.html

and I encountered the same difficulties in disassembly (of the socket head cap screws holding the assembly together, the short ones were extremely difficult to remove; I stripped a (cheap) allen key in the process).

Anyway, the inside of my thermoblock looks like this: 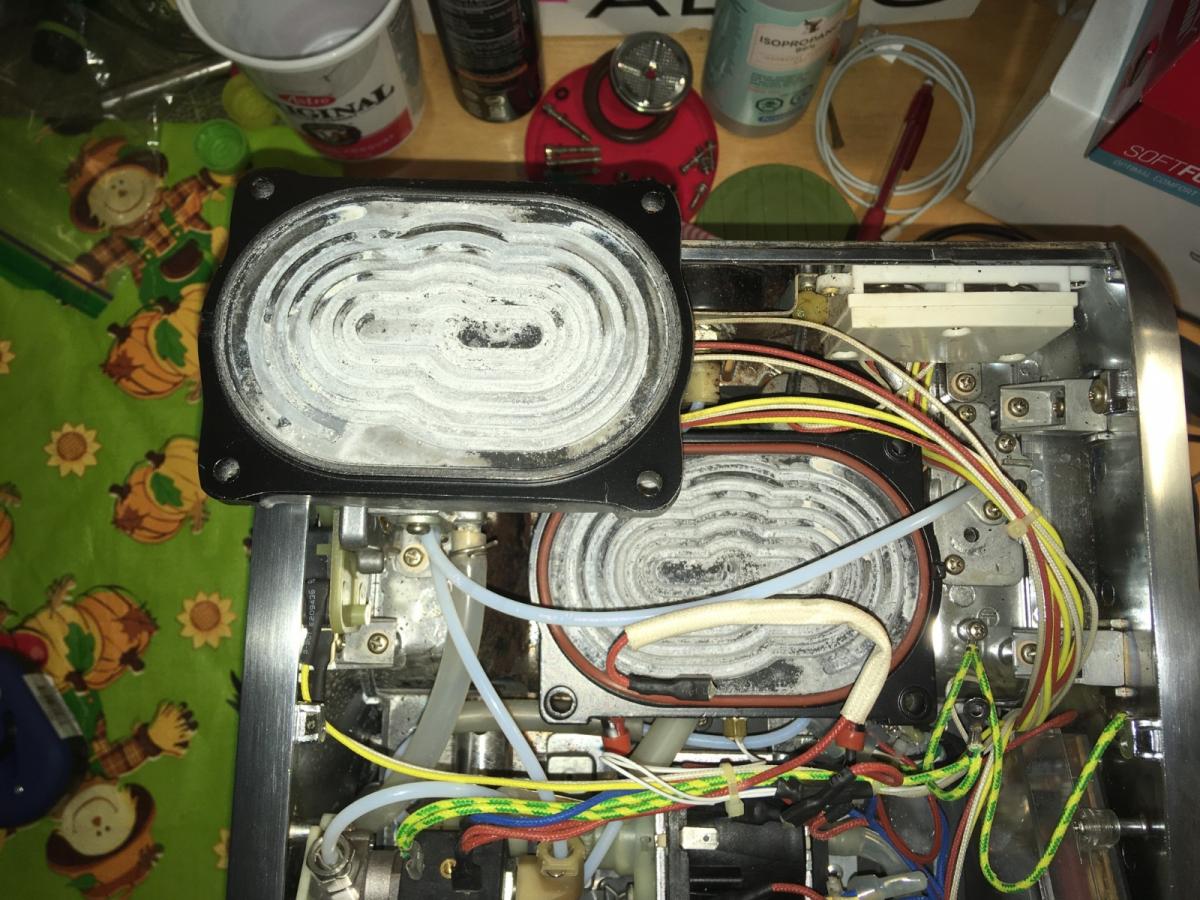 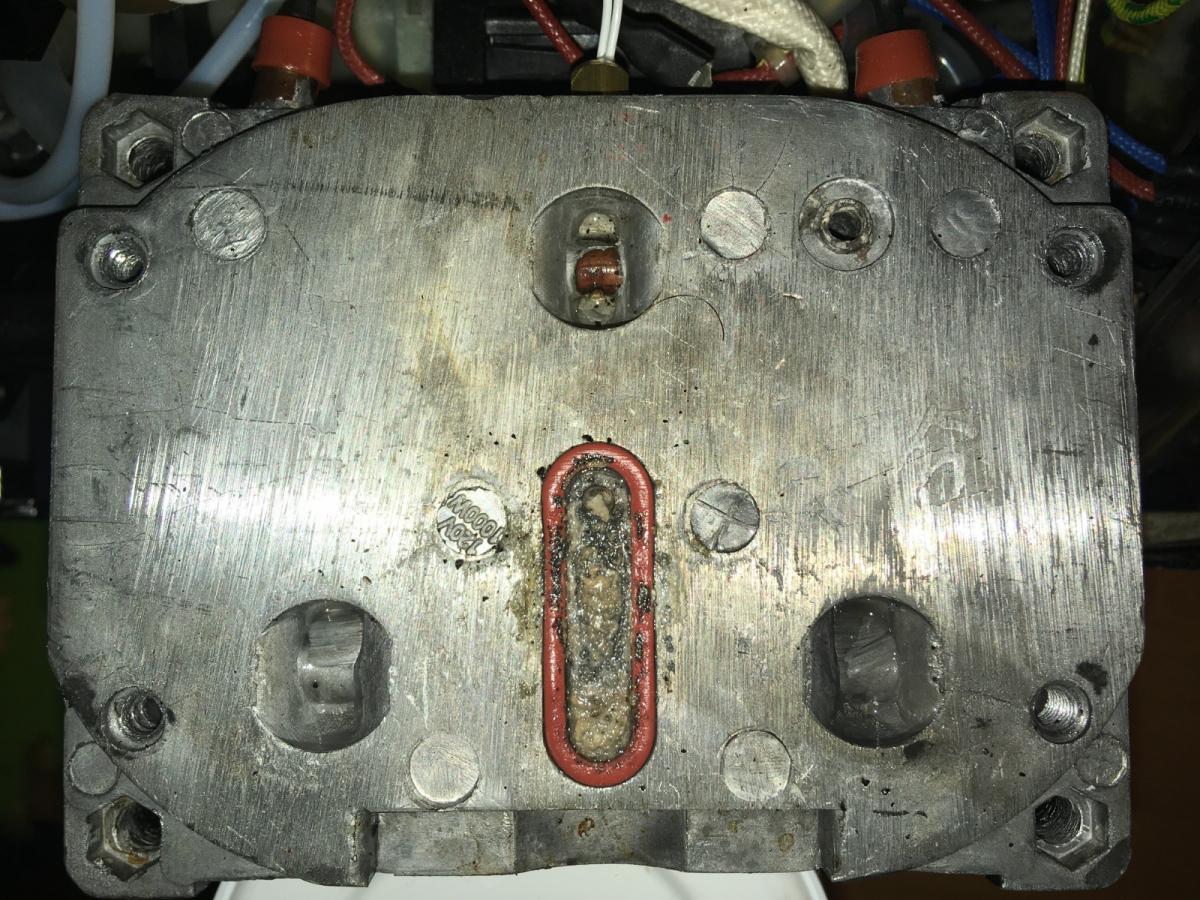 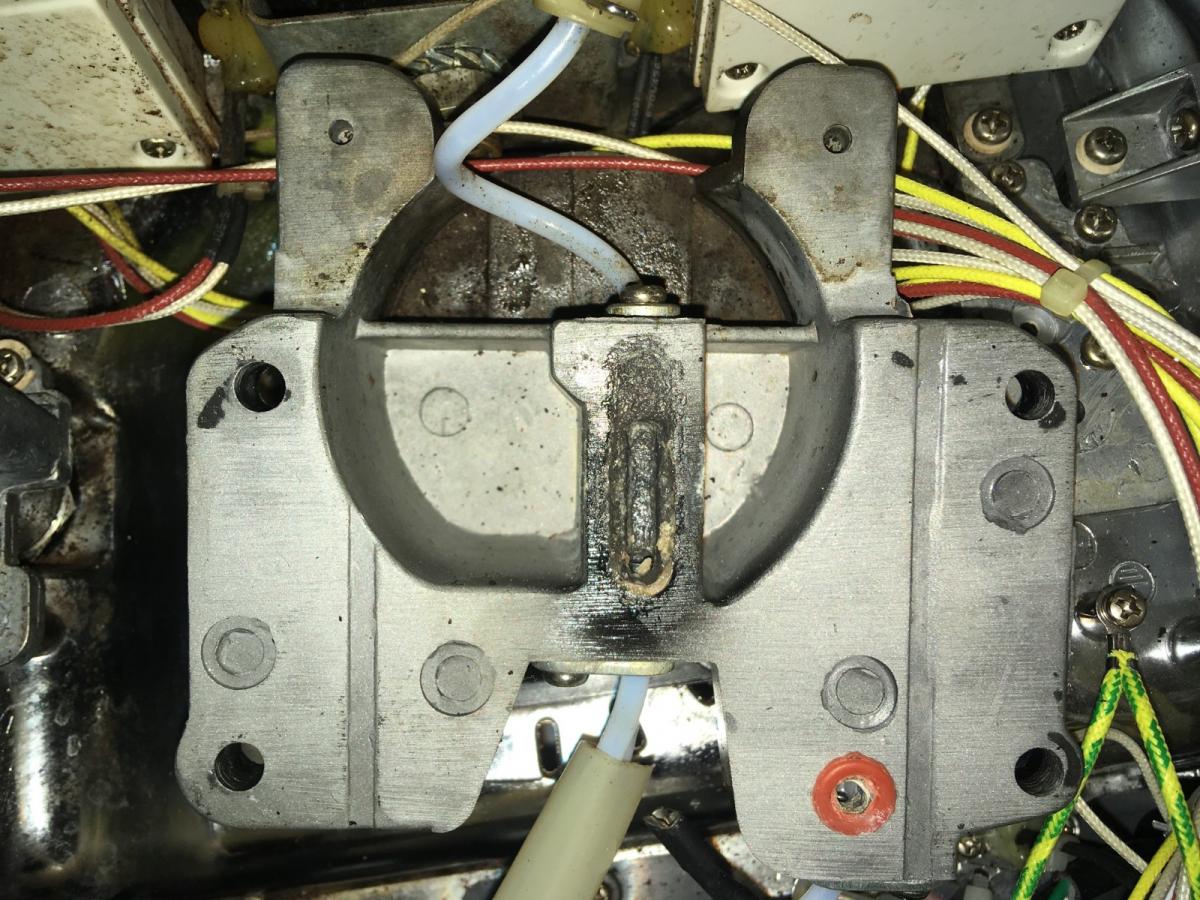 Massive amounts of scale buildup, wouldn't be surprised if it significantly impeded the flow of water. I'm planning to clean it up mechanically, maybe also try to dip it in a vinegar bath for a little extra. Seals look in pretty good shape though!

For the loud buzzing, I'm starting to suspect the solenoid valve. I haven't looked at it yet. With any luck, it's some scale buildup which I can clean out. Hopefully nothing more serious than that. Any idea whether neoprene rings are safe to use on the hot side of the machine? By a quick web search, "Neoprene is rated for 275 F (135 C)" which seems sufficient.

To be honest, I'm losing a bit of .. steam .. on this. I did not imagine how many problems this machine could have, and even if I do get it working, I'm starting to doubt the quality of coffee that will come out of it. I did manage to learn a ton about espresso machines in the process, so hopefully that will serve well if/when I graduate to a real one.
Top

Sounds like you are making great progress learning about espresso machines. One thing that will make life easier for cleaning coffee residues is powdered dishwashing machine detergent and boiling water. Not Dawn liquid. Not soap. The cheap powdered stuff. With that you will get most gunk off, hands-free just by soaking the parts. On the espresso machine itself, you obviously can't immerse it. So you use espresso detergent like Cafiza. It's also powdered like cheap dishwasher detergent except it doesn't have the perfumes and spot removers and such. You put that in a portafilter with a blank disc (no holes) and run a few shots. This forces a back flushing cleaning action. You will do this no matter what machine you own down the line. Espresso machine detergent is NOT the same as decalcifying product.

And finally, going forward, you should consider using water without Ca or Mg, which cause scale. And chlorides, which cause corrosion.

eigma wrote:Massive amounts of scale buildup, wouldn't be surprised if it significantly impeded the flow of water. I'm planning to clean it up mechanically, maybe also try to dip it in a vinegar bath for a little extra. Seals look in pretty good shape though!

I agree that a clean up is needed for this machine. Looks pretty messy, and no telling how far all that scale went. If it were me, I would bite the bullet and strip the entire plumbing, tanks, solenoid, check valves, everything, and descale every piece. Basically a rebuild with new gaskets/seals if it's finacially feasible. Now's a good time, though.
Top

Is why the expensive machines recommend scale and corrosion-free water. And why we should all use it, no matter the machine.

Thanks everyone for the replies.

I dipped some parts of the thermoblock in vinegar. I took a shortcut and left the thermostat and screws in, and adjusted the liquid level to keep them above the surface. I think this was a bad idea, it wasn't enough to keep them dry, either by surface tension or vapour, the vinegar got to them and stained them: 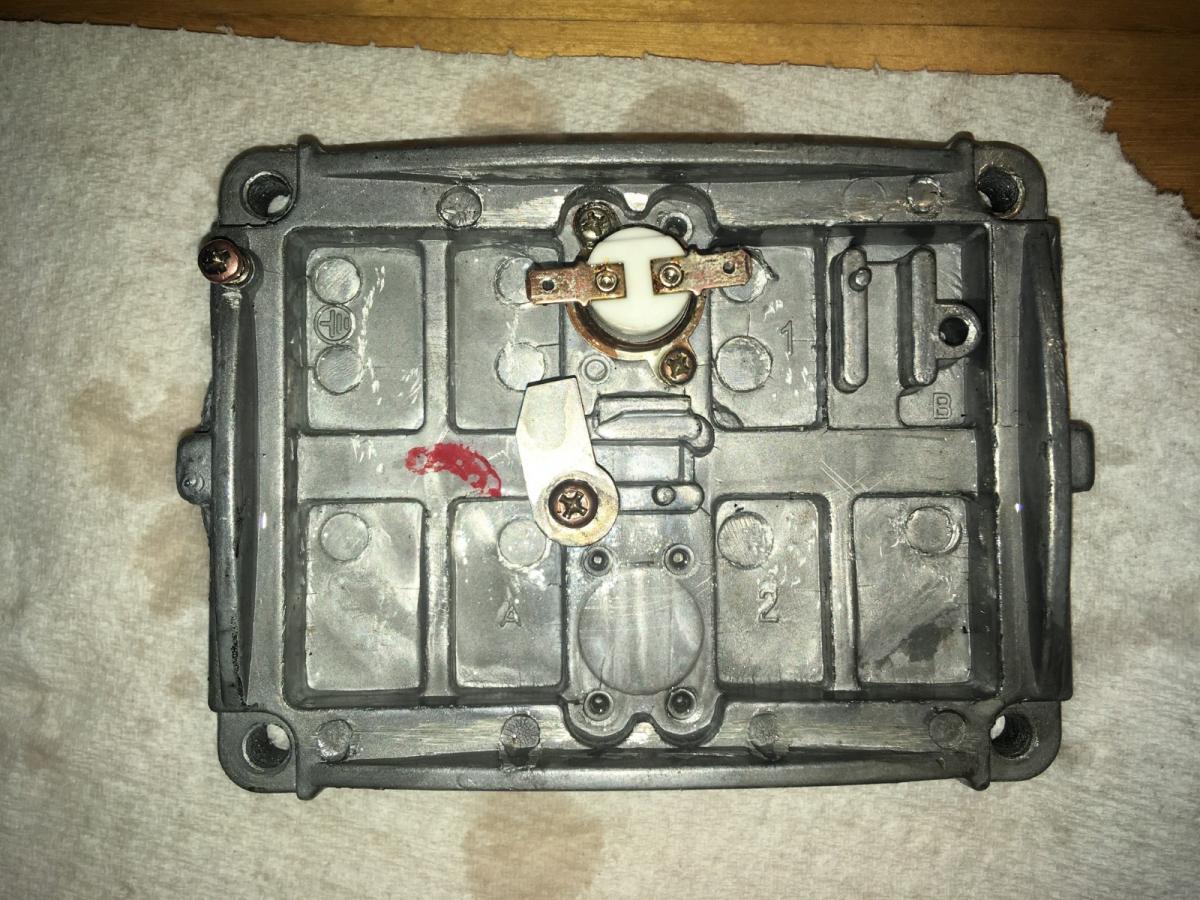 I guess that was some kind of plating for moisture resistance?

Hopefully this doesn't affect the machine too much in the long term.
Top

Another update.. (hope they aren't bugging anyone

I decided to focus on the solenoid valve. Confirmed it's the source of the buzzing noise by putting a multimeter (AC voltage setting) on it and seeing it energized during the periods of buzzing. 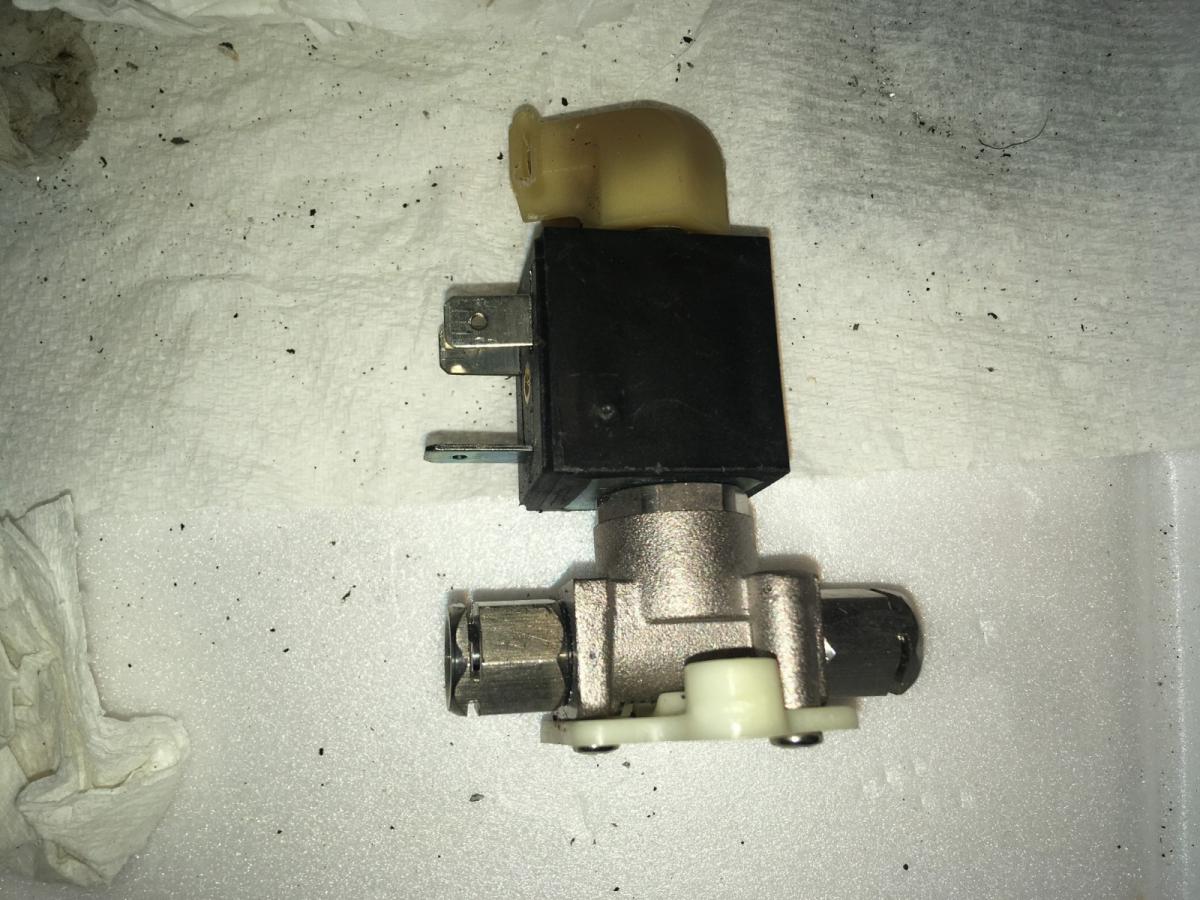 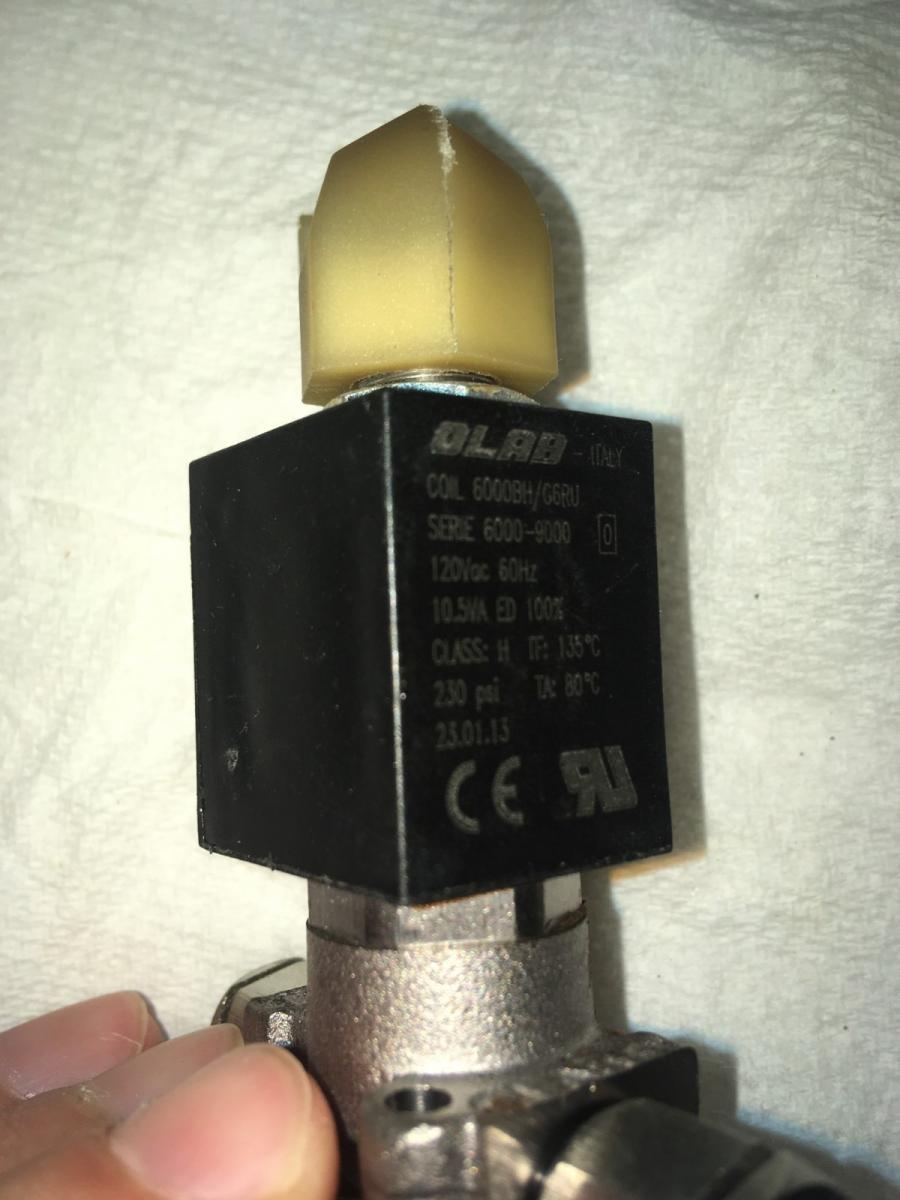 This video depicts a valve very similar to mine and describes how to disassemble it: Mine had some rust on the outside of the shaft, between the shaft and solenoid; and some pink stains on the interior of the valve. Not sure what to make of that. 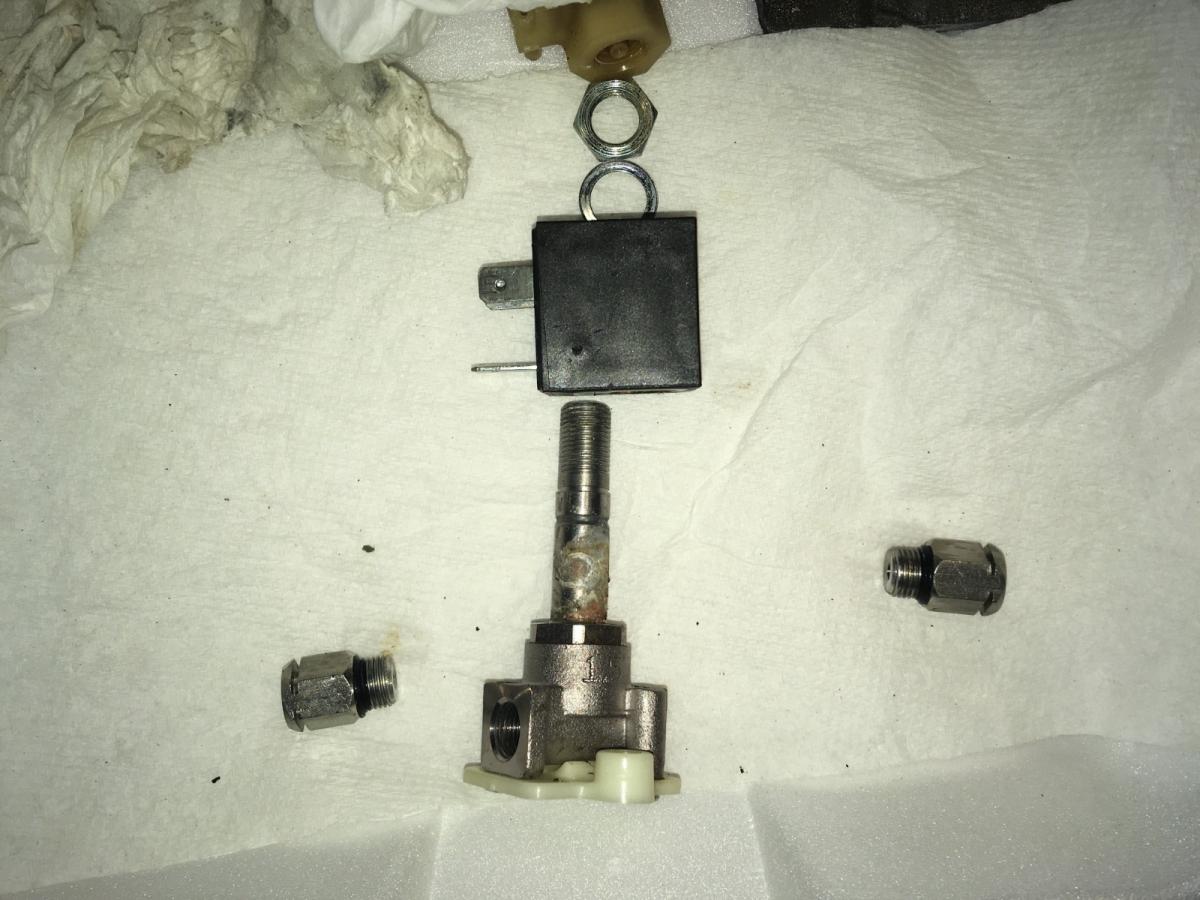 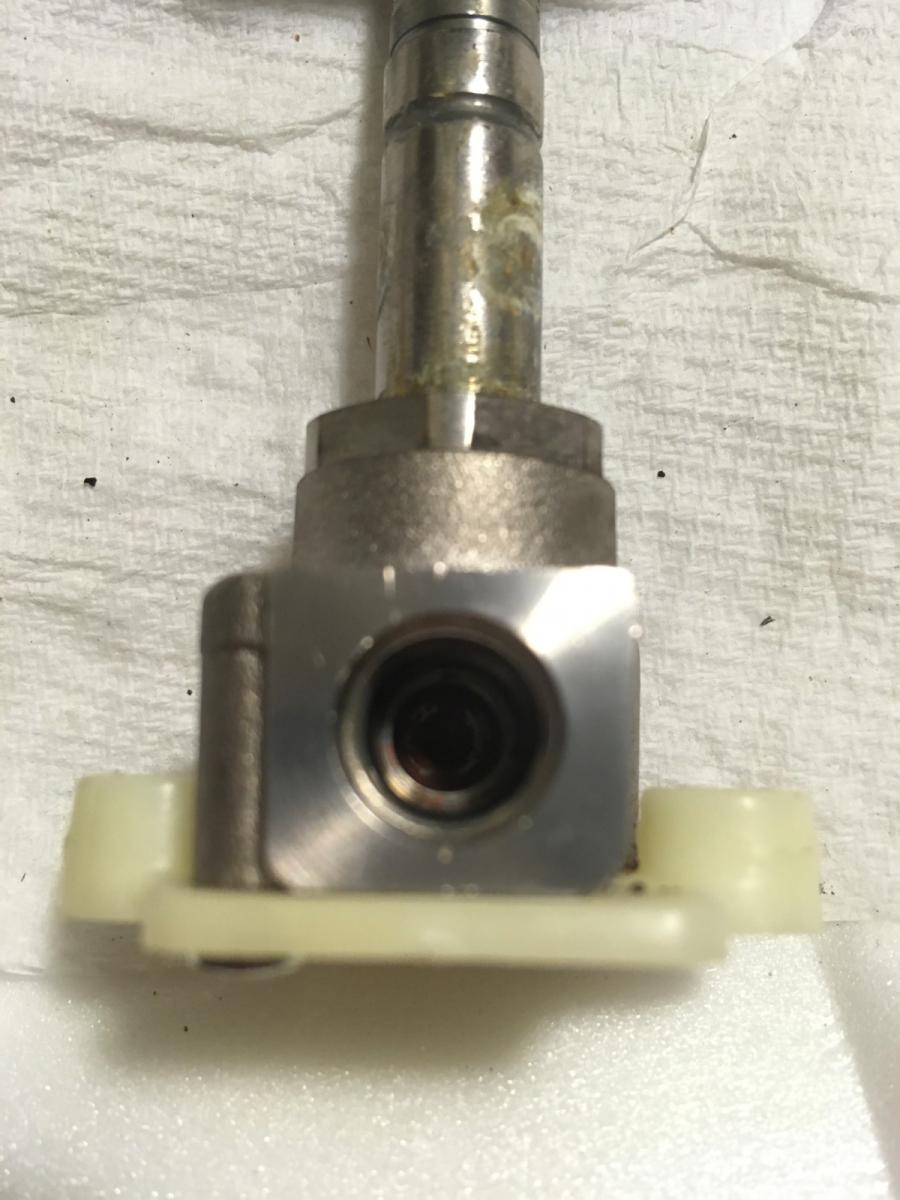 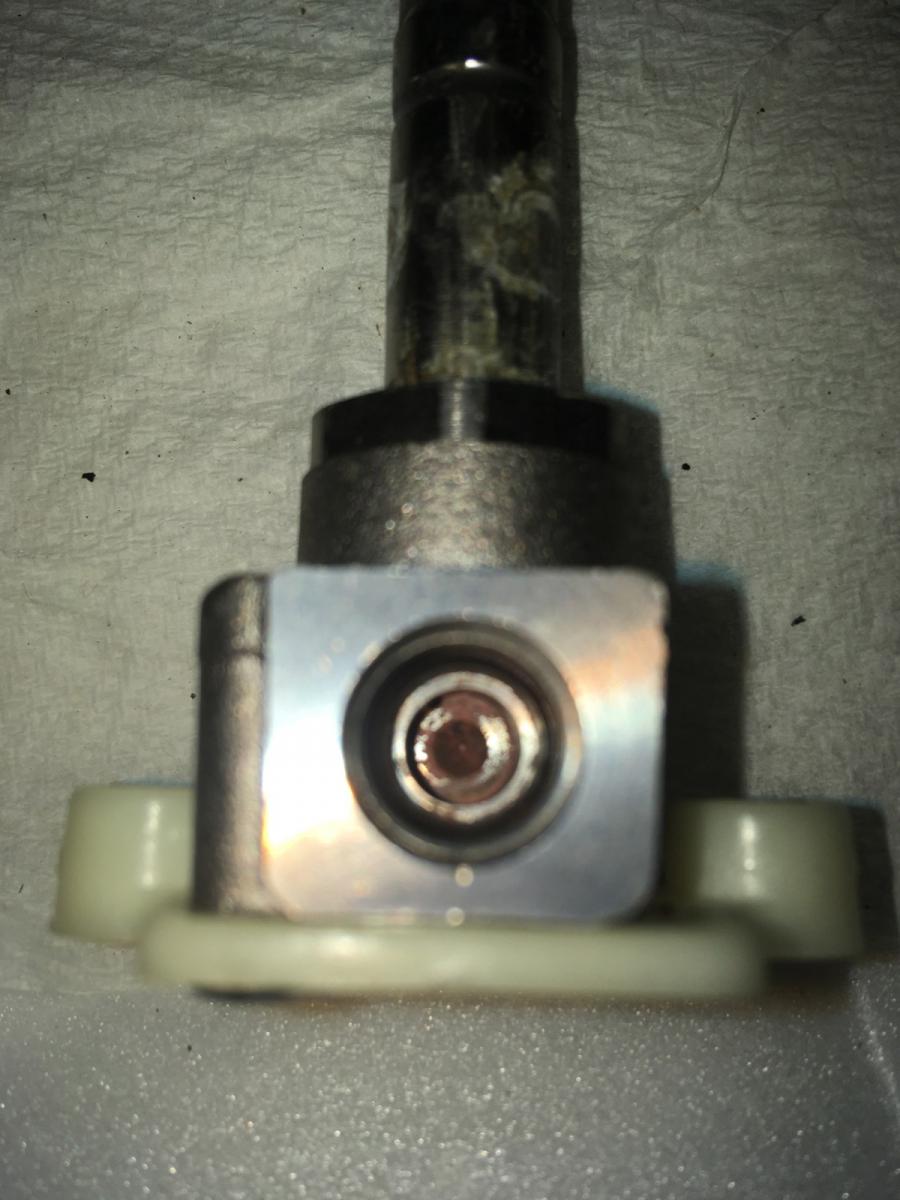 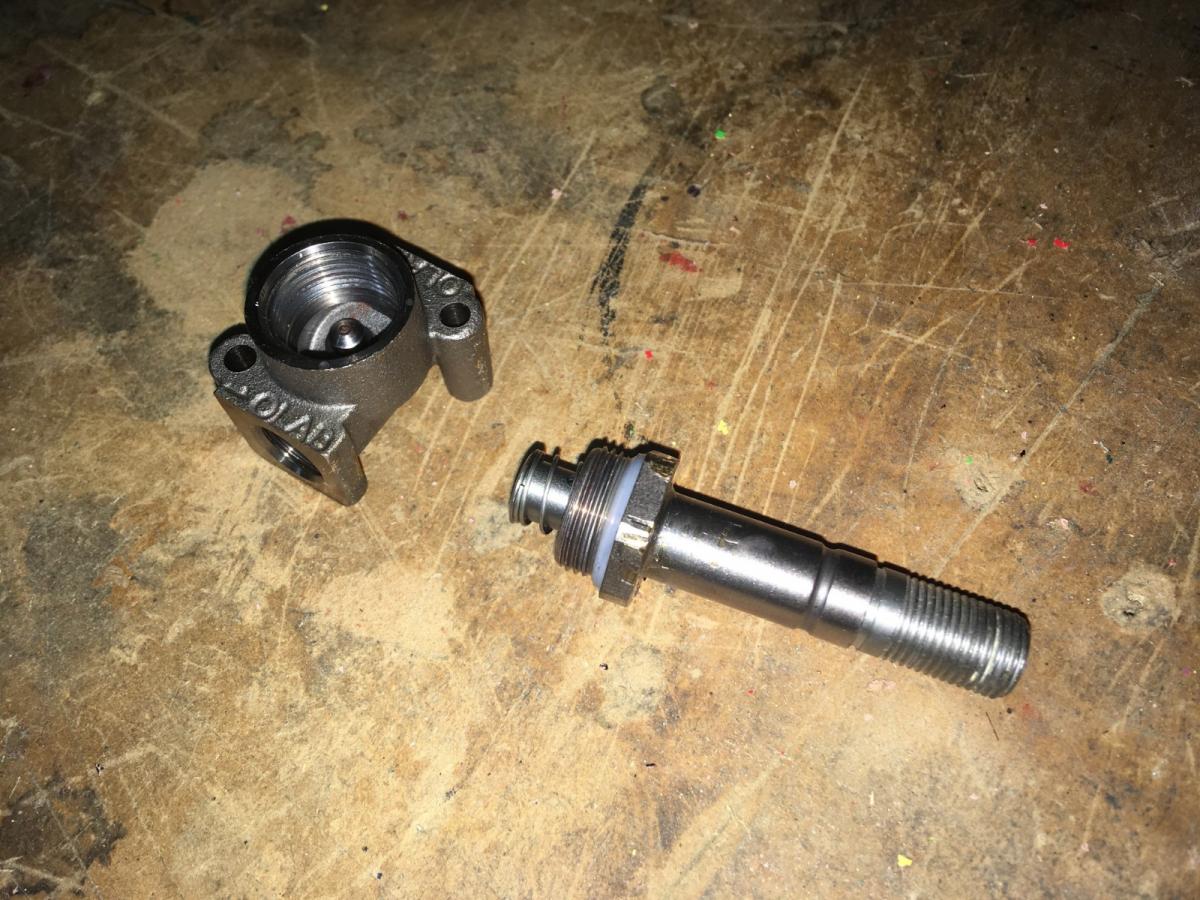 I left all the pieces in vinegar overnight. I did notice some white cloudy pasty precipitate, which with any luck is sediment removed from the surface. However, the inside of the shaft also developed a large pink area: 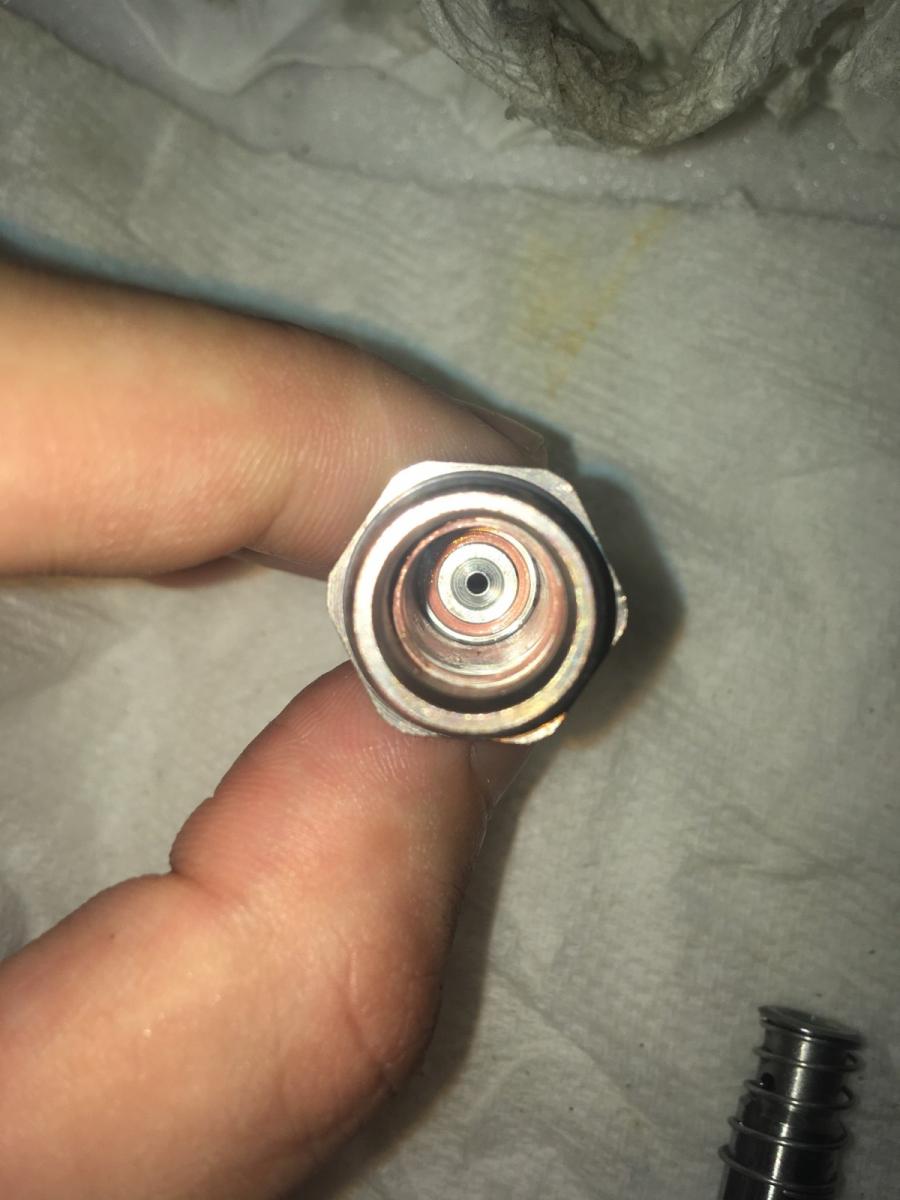 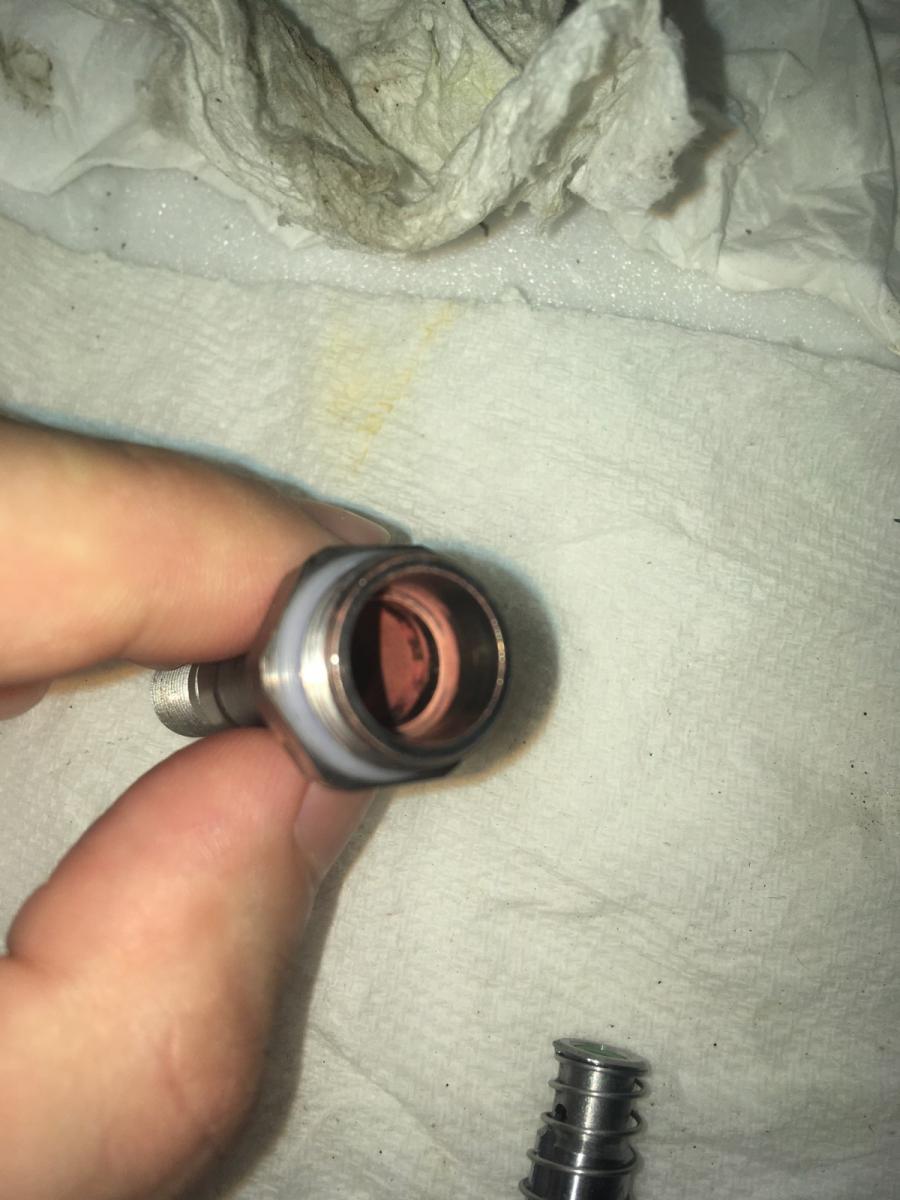 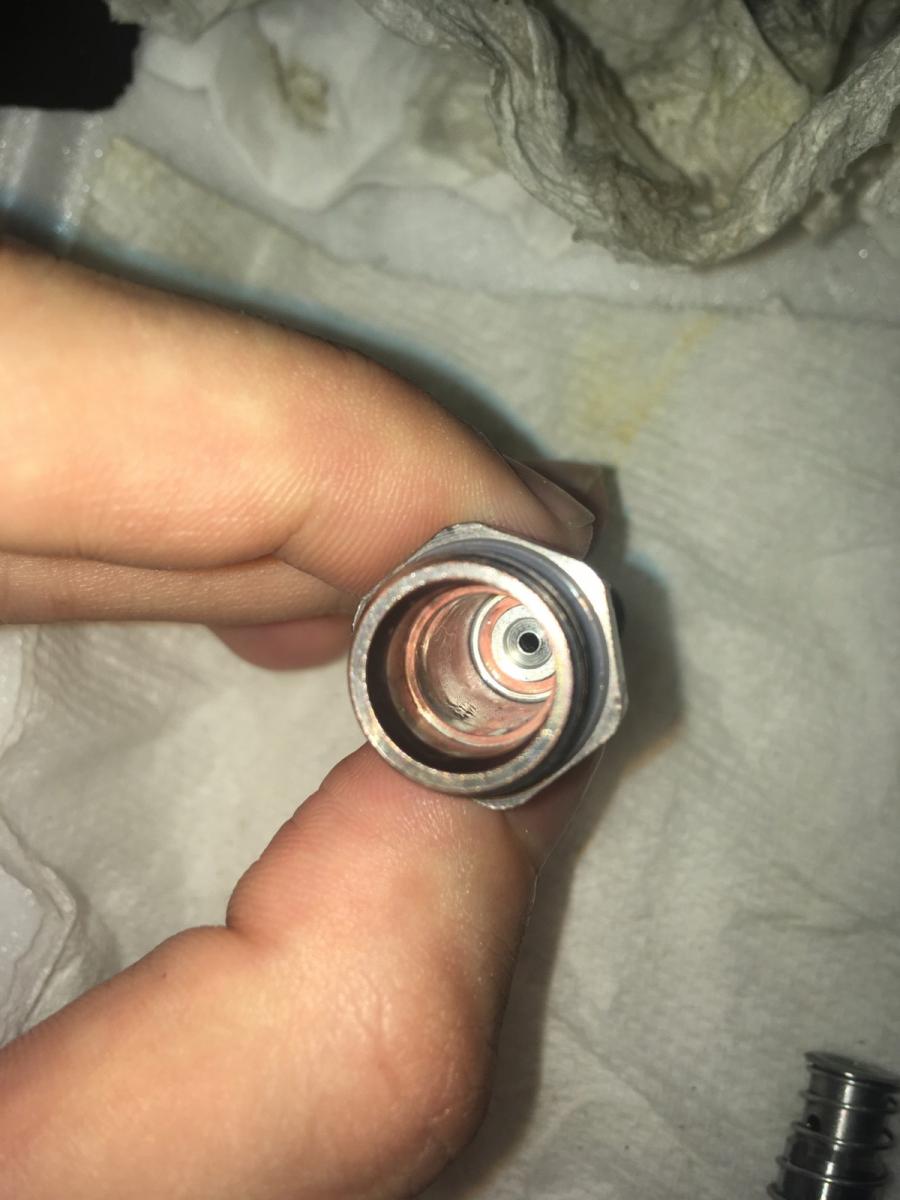 I think I overdid it with the vinegar. After searching a bit, I think this was the brass being attacked by the strong acid (vinegar). The zinc is removed, leaving behind copper (pink). Sounds like copper itself is a reasonable material for fittings, so hopefully this doesn't cause much problems.

Also tested the pressure gauge using a bicycle pump, managed to develop ~2 psi of pressure and see the needle move.

Here's a random shot of the thermoblock, hose and seals which had also been soaking: 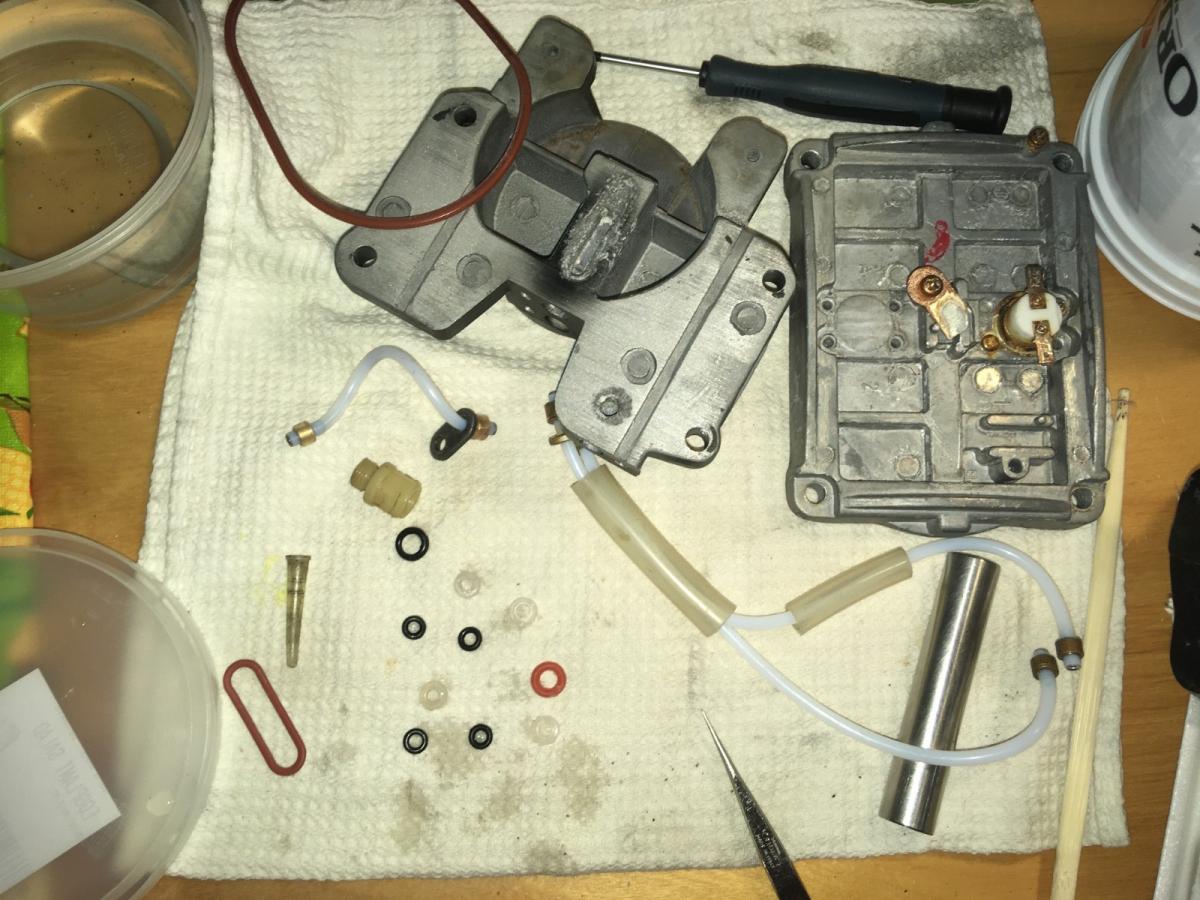 And here's the first shot after putting everything back together! The pressure gauge goes up to the ~9 o'clock position, and consistently does over several shots.

and the puck after extraction: 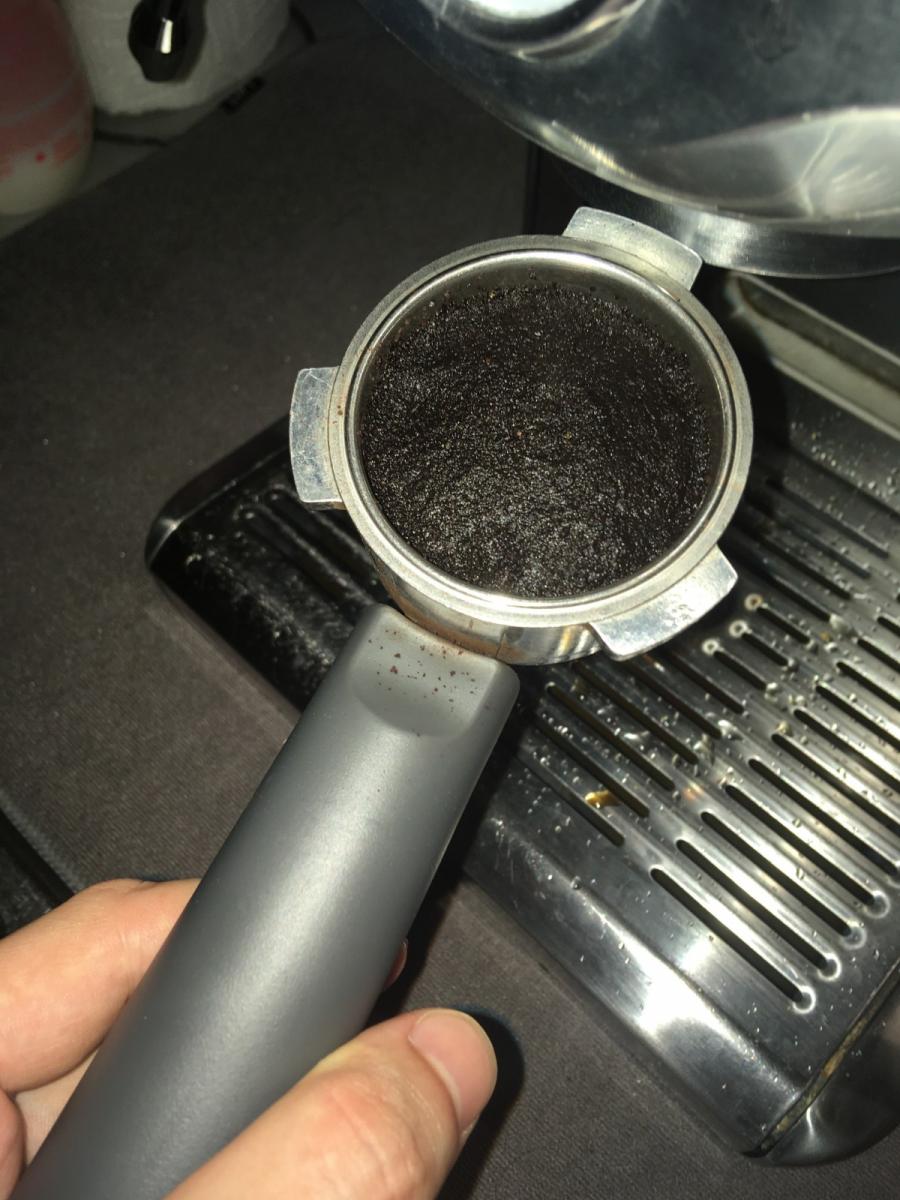 I used some really old Second Cup beans so I didn't have high hopes. To be honest the espresso didn't taste great, but then again I'm not accustomed to drinking just espresso.

The crema looks decent I think?

I also had a lot of trouble with dosing. The filter has a "two cup" symbol on it, but I couldn't manage to get more than ~4 teaspoons (I think ~10 grams), whereas I have read a typical double shot is 19 grams.
Top

eigma wrote:I also had a lot of trouble with dosing. The filter has a "two cup" symbol on it, but I couldn't manage to get more than ~4 teaspoons (I think ~10 grams), whereas I have read a typical double shot is 19 grams.

That portafilter looks to be too small to hold 19g. 19g is a nominal standard for the 58mm standard diameter. From the look of your snaps, your portafilter appears smaller diameter than that.

Your solenoid is still buzzy and I think it's due to wear of a shunt ring in the shaft. Olab is a common Italian brand, also used by legends like La Marzocco. So you ought to be able to find a replacement somewhere. Or even replace the whole solenoid unit with a different or higher quality brand like Parker.

Otherwise great work resurrecting a machine abused by bad water. Now that you've seen and experienced firsthand what bad water does to a machine, you will have already concluded that it's easier to keep it in tip top shape when you're not fighting scale or corrosion.

-Peter
LMWDP #553
Top
← Back •
By accessing this site, you agree to the site's terms of service. If you need help with the site, please contact us.