Another restoration of an Olympia Cremina

Inspired by Steve's restoration thread, and a long-time lust after the elusive Olympia Cremina, my wife and I decided to take the plunge and buy a used Cremina from eBay.

Two failed auctions later, we finally landed our dream machine, a '70's era Cremina (sn 7719363, ebay item 4407127205). A week later, UPS finally delivered our new baby. To our surprise and delight, the machine exceeded our expectations out of the box. First of all, it came in its original box! Here's what we found when we unpacked the outer box carefully surrounded by peanuts: (My wife said "oh no, look at our messy kitchen" -- I said "hey, look, you can see our Rancilio and Pavoni")

Not shown are the portafilter, one single, and two double baskets, and the original tamper! (note the interesting spelling of Olympia: After a visual inspection showed no obvious issues, we couldn't stop ourselves from pouring in some water, turning it on, and pulling a couple shots. It amazed us with its sturdiness and stability -- absolutely stable even under fairly firm pressure on the lever, which is a significant contrast from the Europiccola, whose base flexes slightly as we pull shots.

We decided to proceed with our original plan of replacing all the gaskets and polishing it up to as close to new condition as we could. The seventies-looking paint job and details charmed us into keeping its original look. Here's the decal on the back -- note its location in the lower-right instead of the more modern machines' upper left position. (for the detail-oriented among you, the plate is 17mm from the right, and 28mm from the bottom). At this point, we pulled out our wrench and screwdriver, and started to take this beauty apart. The first thing we noticed was a remarkable lack of rust. Here's the bottom plate: Here's the bottom of the boiler: the red oozy stuff is the sealant for the element contacts. Notice the ceramic around the left element contact is cracked. The right one has a smaller crack as well. We didn't photograph it, but the gasket had signs of age and a little leakage at one point.

The other thing that impressed us was how beautifully the whole thing comes apart. The collar-nut around the tank opening came off easily, then the stainless steel well lifted off, followed by the stainless top, then the outer case easily slid off. One nut holding it all tightly together!

Another demonstration of how rust-free it all is, here's the bottom edge of the outer housing: So, that's all the good stuff...now for the "interesting" stuff. First, the entire boiler is surrounded by an asbestos coating. Fortunately it's in good shape -- not flaking or anything -- but still asbestos is a scary word. I think we're inclined to leave it alone, but will read up on risks and options for stabilizing or removing it. We may just leave it well enough alone. Here's a view of the asbestos enclosed boiler: The next interesting thing is that one of the ears on the portafilter shows significant amounts of odd wear, and the spout has lost a lot of its chrome This makes us wonder about the relative pristine-ness of the rest of the machine -- was it used a lot, just very very carefully? The next obvious thing to check was the matching portion of the group-head lock (next picture), which doesn't show the cause of that wear: This mismatch makes us wonder if this portafilter doesn't match the rest of the machine. Given everything else about the machine, this seems unlikely, but it does leave one wondering...

Finally, as I was removing the bolts that hold the tank bottom on, I noticed that they were in varying condition. Some of them were pristine, others showed signs of pitting. Just as I was struggling a bit with one of them, my wife said "watch out -- don't force anything", and the bolt-head gave. Just the head. Uh oh. A second bolt refused to budge, and I decided not to force the issue. Fortunately, my wife repairs equipment for a living, so she has some experience with drilling out stripped bolts and screws. She's never had to do it in anger or fear, though, so we'll be venturing into new territory.

Our overall plan for this rebuild is to: dylan mcnamee (LMWDP #33)
Top

Hi! I am excited to have the chance to watch the progress of your project. I am just at the cusp of a similar one, and am wondering where you are getting your replacement gaskets.

The machine looks to be in pretty good shape. Congratulations!

It is fascinating to see these restoration projects on the Cremina.

The parts prices seem relatively high - $75 for a PF and another $50 for the piston gasket set from the manufacturer. The good and somewhat amazing thing is that more or less all parts are available for even the older models...

Good luck with your restoration. With all the expertise hanging out on this forum you should be able to get all the help you need.

Interesting that early models included insulation. (Obviously too bad it was asbestos.) Should we be thinking about adding insulation to ours? Given the following points:
- My pattern of use is to leave it on for an hour or so a few times a day
- It takes only 10 minutes to reach full temp
- My first heater lasted over 20 years

Is there any real advantage to be gained from insulating the boiler?

Dylan, welcome to the board and thanks for a great first post. You should have a great time with this machine and some fun learning its internals. Would be interesting to get a history of the machine. Looks like it is a 1977 and while it may be hard to confirm, may come from the run that Olympia did for Zabars in NY...since several of the colored ones trace back to there.

These all have some interesting stories and I am sure this one has a few to tell. Now the asbestos spooks me a bit. I would say your best shot is just leaving it alone, but you need to be very careful with it. I assume that this was just a step to keep the case cooler before they found out how nasty this stuff was. May be worth a call to some local experts to see if there is a safe way to have someone remove it or to stabilize it further. The tank is different than a 67, but you could contact Markus at the factory and see if they have a replacement...could be worth the peace of mind.

The bottom of the boiler is pretty standard...the screws are available and you can tap out the broken ones. Sears had a nice kit that makes this pretty easy to do. Let me know if you need a picture and I will show you mine..

That portafilter looks in need of replacement. The spout looks close to what mine did before I got it rechromed. If it holds pressure then you may be OK, but I would be concerned whether you can get a really tight fit.

Please let me know if I can be of any help.
Steve Robinson

Well, I've made some progress. It's taken a while, and I'm not done, but I have a "mostly working" Cremina. Here's what I've done since last checking in.

I tried and failed to drill out the broken bolt. Fortunately, I quit before doing permanent damage to the machine.
I took the boiler in to a local machine shop (I called around, and got the impression that any of them could have done the job). My machinist told me he would have charged me the minimum ($25) to remove both bolts if I hadn't tried to drill the one bolt out. What he did with the one that was just a stub was weld a small square of metal to the end - the thermal shock from the welding allowed him to just unscrew it. He had to retap the threads of the one I failed to drill out. All's well.

All that's left is to replace the sight glass gaskets and the copper compression washers. However, I couldn't wait to see it working, so I decided to reassemble the parts I had.

Here's the piston, with the piston gaskets from the famous Home Espresso Repair in Seattle. 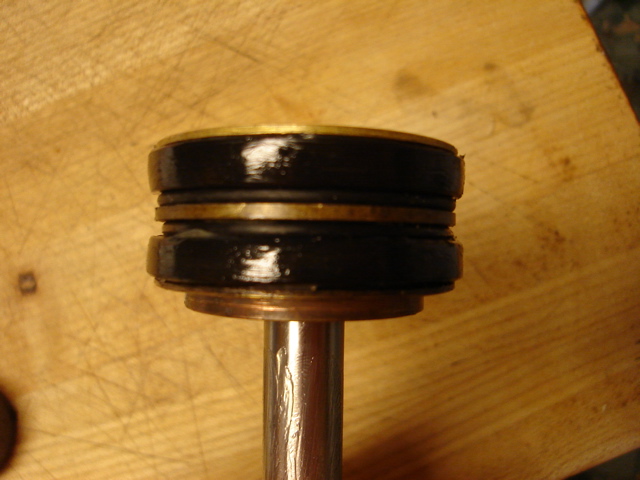 Note the o-rings he sent to fill in the gaps between the gaskets and the gasket grooves -- I chose to put them on the narrow side of the gaskets in order to push the flanges outward on the piston. I accidentally assembled the piston without the o-rings once, and it acted weird -- the pull hesitated halfway down, and I couldn't figure out why.

Here's a detail of me using a toothpick to tuck the gasket's flange in to the piston. 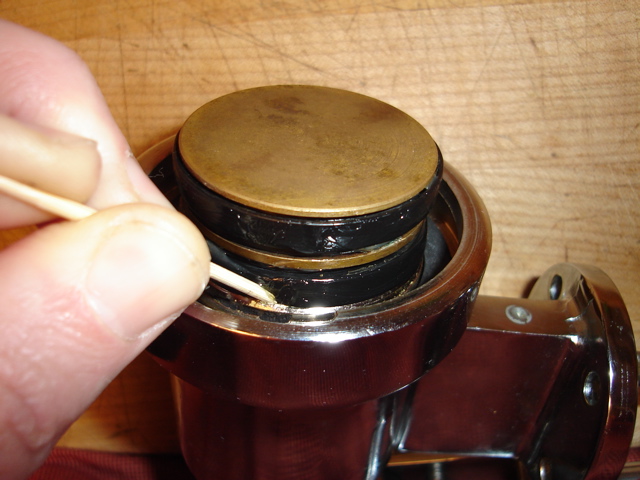 Note(!) This model year ('77) does not have the magical four holes that later years have. I wonder whether this means my pucks are in more danger than with the "holy" models. One thing that concerns me in this regard -- with the lever down, with my hand covering the group-head opening, when I pull the lever up I can feel a vacuum on my hand. I can't imagine that's good for a puck. Could any of you folks with holes in your pistons tell me whether this experiment yields a vacuum.

Finally, because my portafilter wasn't in great shape, and because I was curious about it, I used a dremel and cut the bottom from my portafilter. I would have taken an espressoporn shot, but I've made too many shots today already -- I'll post one tomorrow. 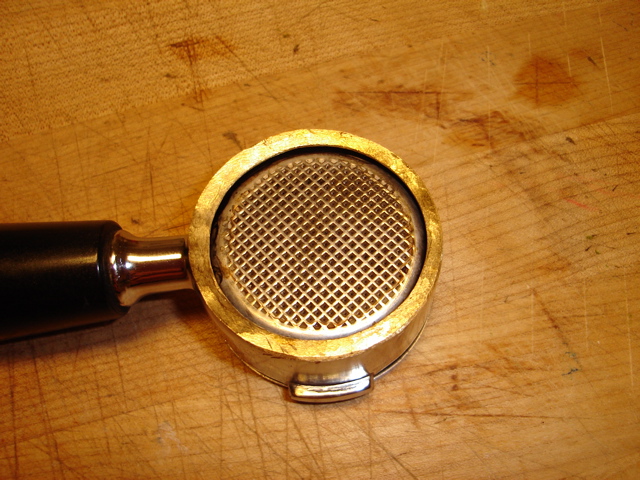 Here are some early shots.

I don't think I have my grind quite dialed in, and maybe my beans could use some tweaking...still, I'm pretty pleased with them. 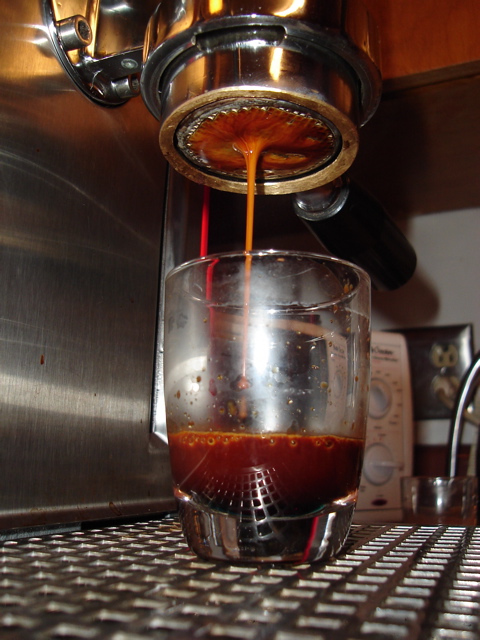 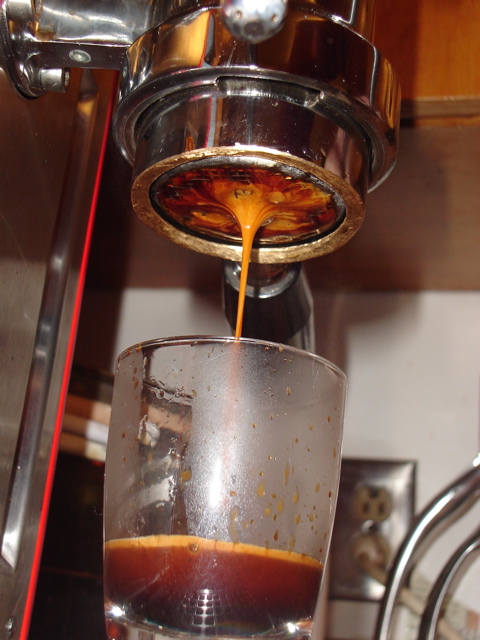 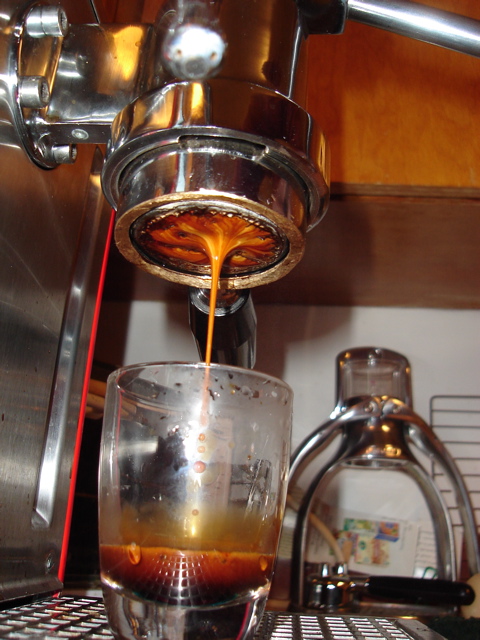 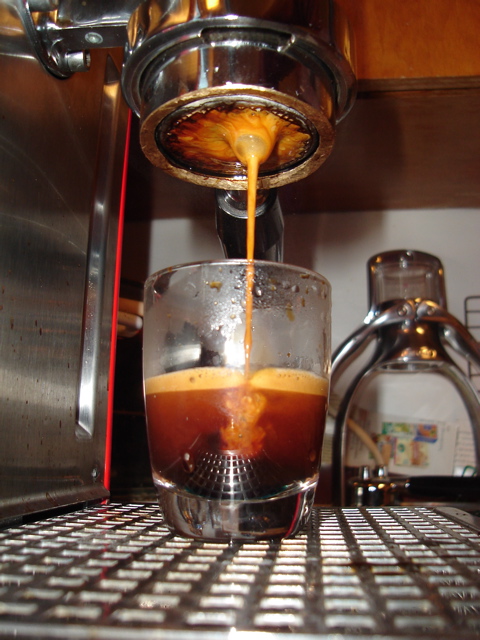 And the puck from the last shot. Maybe I'm seeing some cracking around the edges from the intermediate "up-pull"? 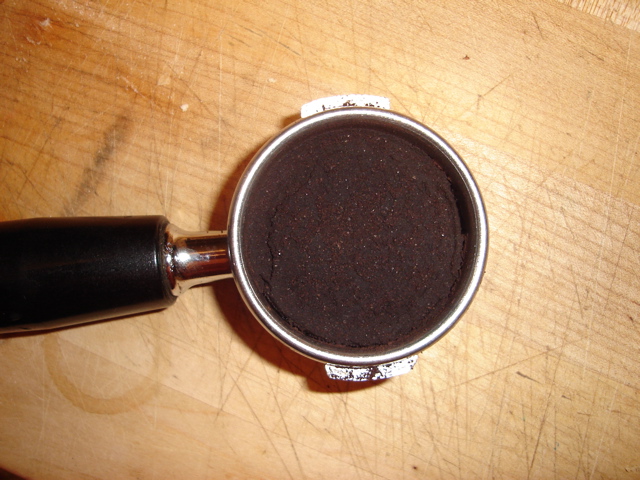 Well Dylan... you beat me to posting photos of naked pours from a Cremina. You'll see mine soon

I've got a question that possibly should be starting another thread, but your cracked puck leads me to it. Can someone please explain what happens to the air in the grouphead chamber as it initially fills with water? I've never been a good student of physics and this boggles my mind. I've got a Gaggia copy of a Pavoni machine, and even with a second pull, I've yet to see a cracked puck or the bubble mess at the end of a pull some others have mentioned. My technique: before locking on the portafilter, I raise the lever to the point just before water starts to enter the chamber, which is a bit tricky, but I somehow manage. So if the entering water immediately falls and covers the grounds and fills from the bottom upwards, how does the air escape? Somehow around the piston and through the top of the grouphead? If that's the case, how come water doesn't also spit out? I'm perplexed, please help! Oh, and by the way, I love and painfully miss the Pacific NW. You live in Portland and you scored a Cremina at a great bargain, you lucky sods!!!

Hogfire wrote:So if the entering water immediately falls and covers the grounds and fills from the bottom upwards, how does the air escape?

I'm not a physics major, but I assume that a wet puck looks pretty porous from the "trapped" air's perspective.
Dan Kehn
Top
← Back •
By accessing this site, you agree to the site's terms of service. If you need help with the site, please contact us .