It only hit me recently when I began disassembling the groups in my Gaggia that I realized I started the first steps to restoring the machine, so I decided to start its own thread rather than keep posting to my acquisition thread. I purchased this machine in February and it has been sitting in the atrium of my apartment since then. It will be moving with all my other stuff May 31st, so when that date passes this thread will likely not have anything of note added until it arrives back in the US around early August. The machine itself is in decent condition, notwithstanding the missing drip tray. I will try to be as thorough as possible during this thread, and it will be my very first full restoration of an espresso machine! 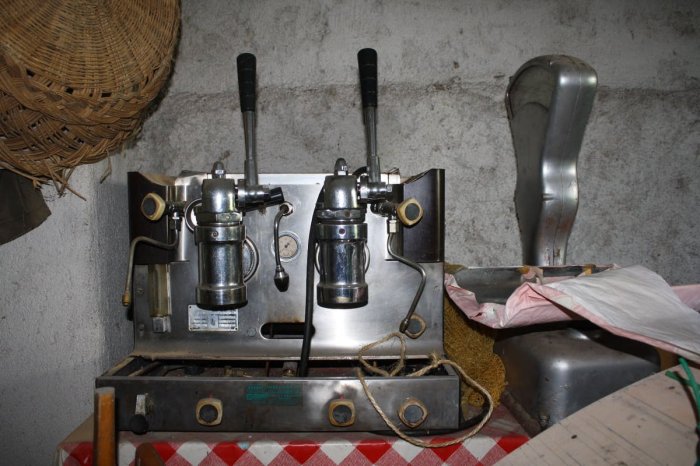 Here is the machine as I received it: the panels are actually in pretty good condition and I already decided to keep it original after I finish repairing the machine. All of the knobs are accounted for as is the gas system and electrical wiring. All of it needs a good cleaning. The portafilters are an unusual type that I have seen online once or twice before, which I think are pretty cool in its design. They utilize an open style spout similar to a fountain pen. 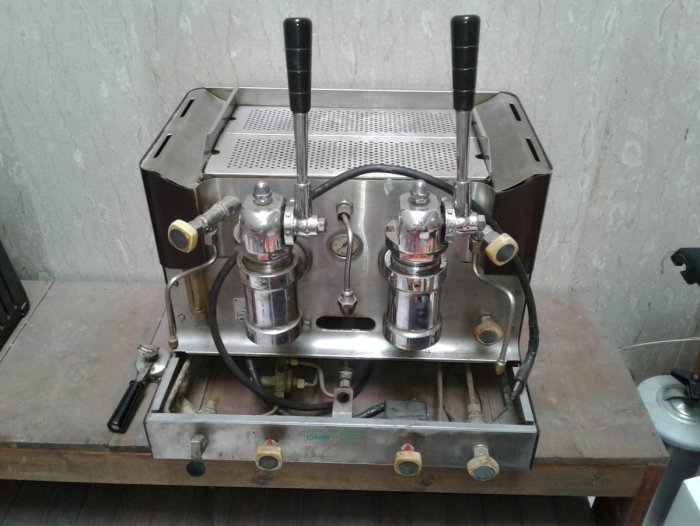 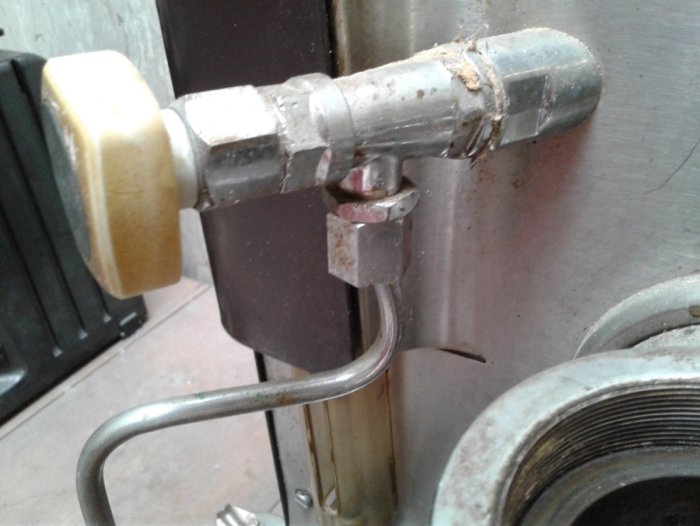 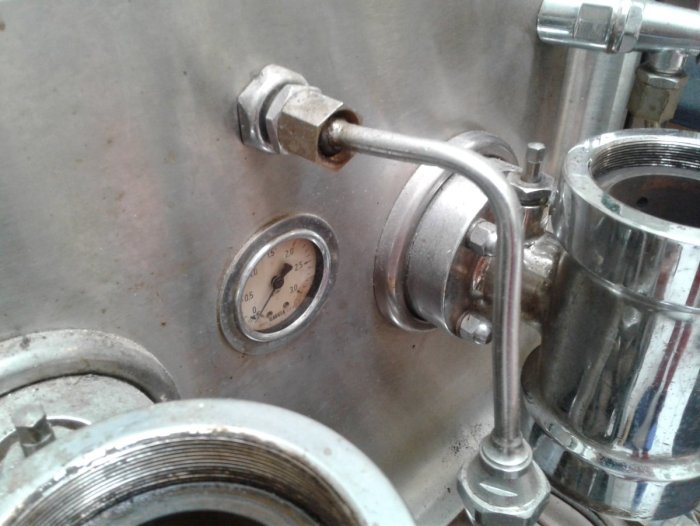 I started with the groups, as I will not be going too deep before the move and can reassemble them if needed. I unscrewed the left group first to check the inside, and it was what I expected: a grimy and decaying gasket stack and a rusted/very dirty shower screen. It was when I unscrewed the right group that I ran into my first unexpected find: clogged SOMETHING everywhere inside with the consistency of fine powder. My suspicion (though I do not want it to be true) is the former owner never cleaned this group, and as a result coffee continuously built up over time, to the point the piston itself, which is meant to wobble a bit, is stuck in one position! The good news is this powder easily falls out, so I have been just gently tapping the group assembly to get most of it out. 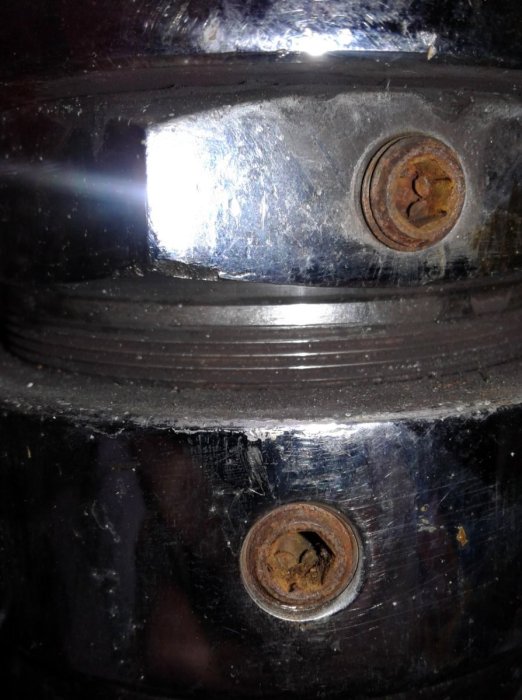 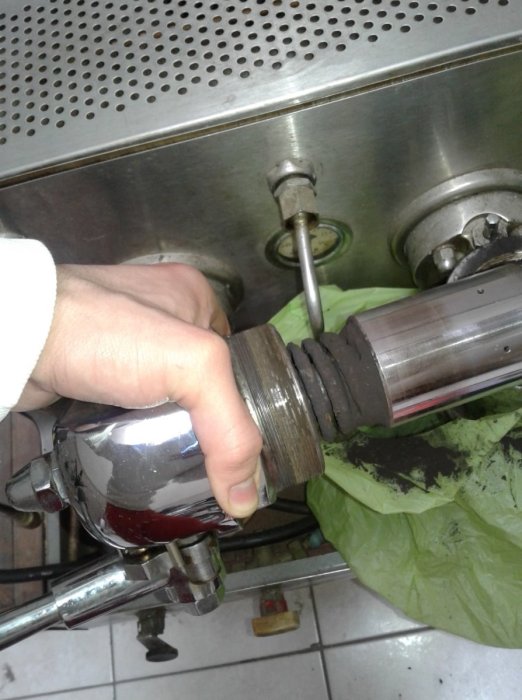 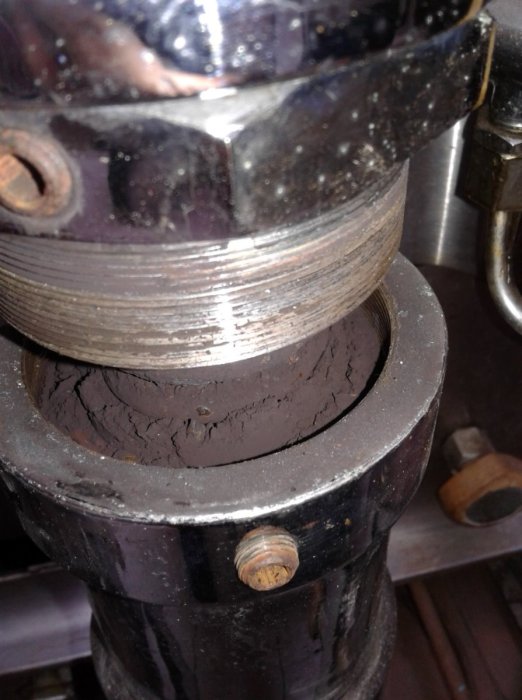 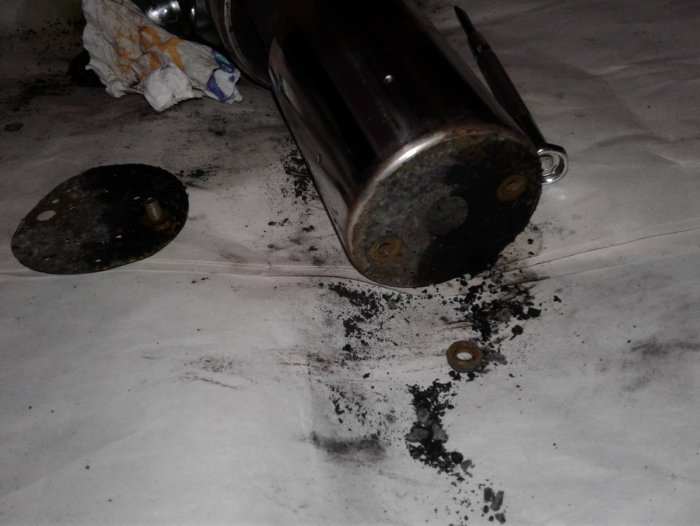 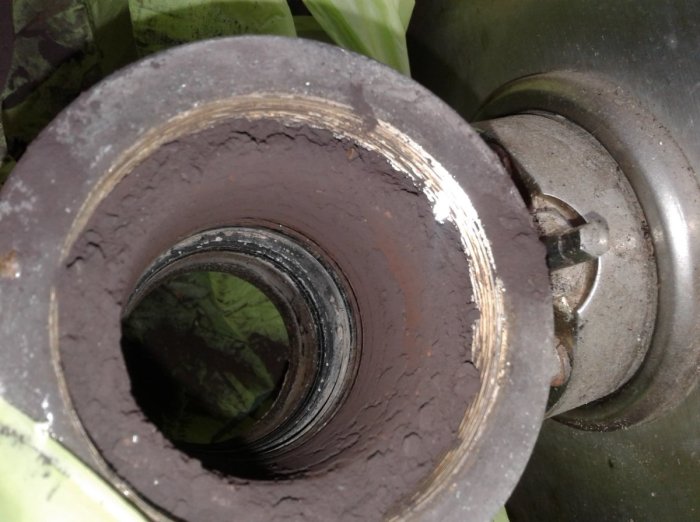 I have been trying to take off the side panels, but I am having some issues doing so. It appears that there are some bolts that hold these panels together in VERY inconvenient spots, notably in the back. I also one stuck side nut on the left panel, but I have been working on it with WD-40 and will move on to Evaporust if it does not budge. I was able to get off the other side panel nuts by using a US quarter gripped by pliers, as the inside of the screwdriver hole is concave and does not work well with regular screwdrivers. This method was recommended by a tool guy in a local market place, where I also purchased a bearing extractor for the groups for an excellent price! My first question on this machine is how I can approach the nuts on the back of the machine, or if there is an easier method of accessing the machine. I am adding photos of the known nut locations 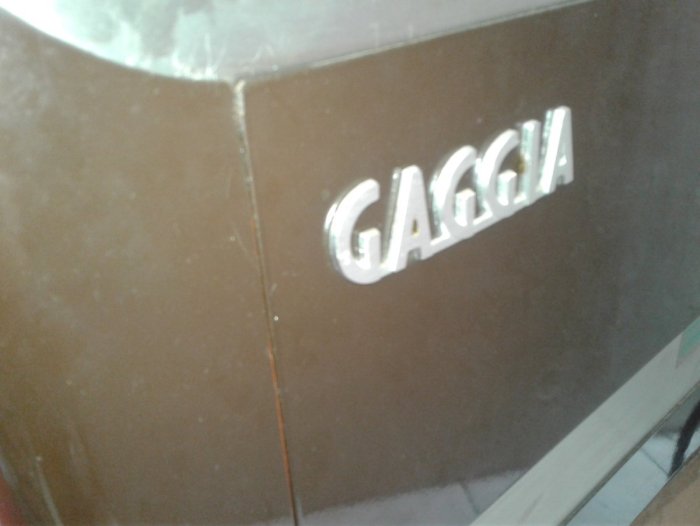 possible nut behind the panel on the upper part 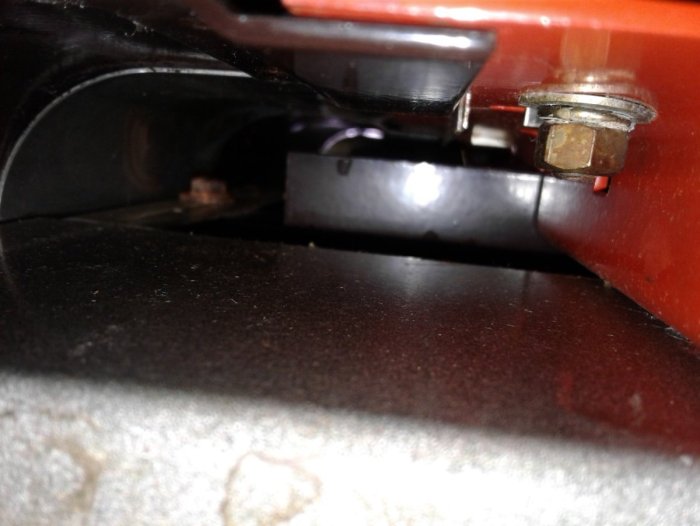 Painful nut on the bottom part of the back panel 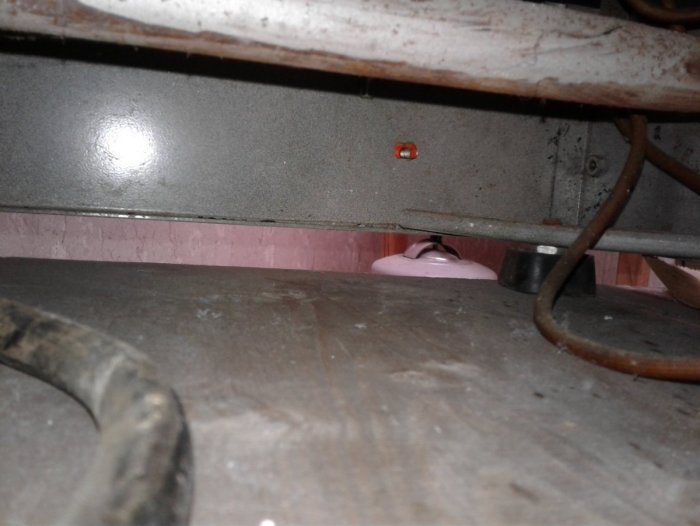 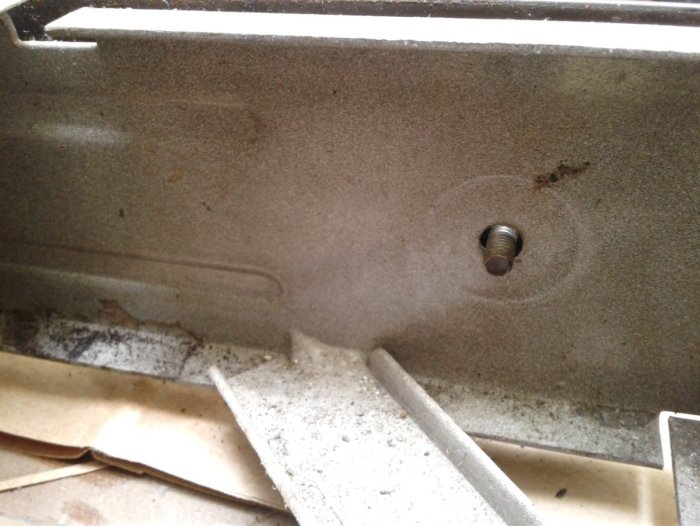 Ok, I've procured a very small sized 10mm wrench and could get the two bottom nuts on the back of the machine off. This is where I confirmed that there are two bolts on the upper portion of the backside that I simply am at a loss on how to reach, as I would need to take of the top cup holder to access them, and the cup holder heating element is preventing me from removing it. I did manage to take off the bottom portion of the back panel, so that is a small victory. I will continue to think of a method of getting to them in the meanwhile. 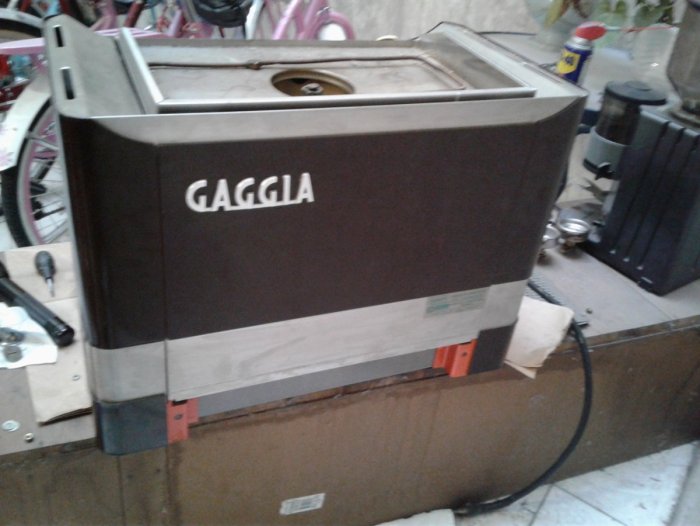 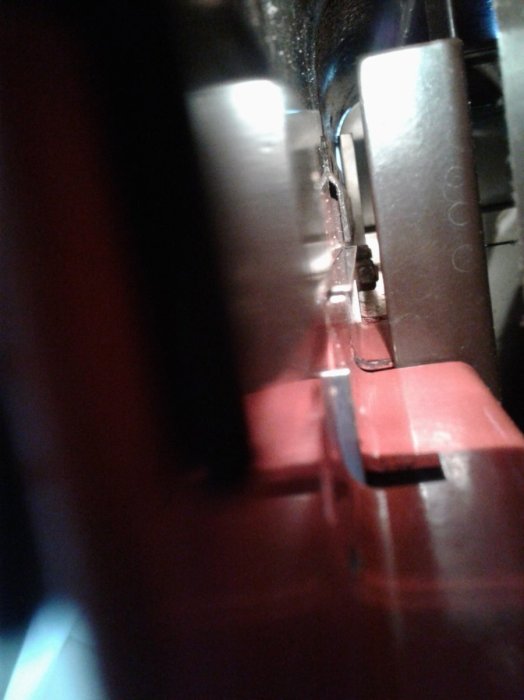 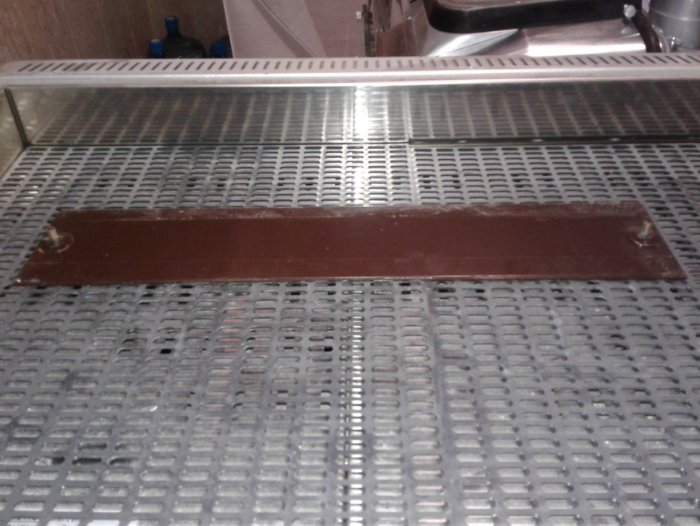 As to the jigsaw-nature of machine disassembly, this is where the strategy comes in. If the cup holder needs to be removed, but the heating element is precluding the removal of the cup holder, youbhave to move upstream and see what's precluding the removal of the heating element. This will dictate the order of disassembly and reassembly.

What needs to happen to get the heating element loose?

As to the jigsaw-nature of machine disassembly, this is where the strategy comes in. If the cup holder needs to be removed, but the heating element is precluding the removal of the cup holder, you have to move upstream and see what's precluding the removal of the heating element. This will dictate the order of disassembly and reassembly.

What needs to happen to get the heating element loose?

I am able to wiggle the cup warmer tray a bit, about 1 inch in height on the edge. I am thinking of inserting a long wrench to hold the hex screw on copper tubing that screws into the element connector and then turn the connector on top to unscrew the element and possibly be able to take off the tray. I will try that and see what happens either tonight or tomorrow. Once I do manage to remove all panelling I will have a photo shoot of the order to take off the panels including what else may need to be done (ie removing the cup heating element).

I also took off the group nuts and as expected neither group will budge. The likely suspect is either a worn gasket sticking to the group or rusted bolts (and they do look pretty rusty). If it is the latter I will not touch the groups until later but if it is the former I will dig out my mallet and a chisel to chip out the gasket, which I saw done in Paul's Orione Restoration thread.
-Ryan
Using a spice grinder violates the Geneva Convention
LMWDP #612
Top

For a penetrating oil WD-40 is close to useless. The best there is is a product known as KROIL. This is an industrial account purchase only as it actually works. Once back in the USA you can order it yourself through KANO Labs. When you look at the order form you will see what goes in the blanks. Buy a gallon can of the stuff and it will last multiple years. It is not really cost effective in smaller quantities even if you can find it. Basically you warm up the stuck part with a heat gun to a temperature as hot as you can manage without destroying something and then dribble on a bit of KROIL and let it sit overnight. When starting the loosening process a bit of mechanical agitation of the assembly aids disassembly without damage. There is a real art to getting these things apart. There should be a lead pellet under each of those hex head set screws so don't let it get away as it protects the threads of what is being clamped. If ther is no pellet then a previous disassembly has lost it.

The steam heat line has to come off before you heat to take off the top tray. That is a single pipe steam heater and it must always slope smoothly back to the source of steam so the condensate drains back and if it is not then it just quits working. Don't bend it.
Top

OldNuc wrote:For a penetrating oil WD-40 is close to useless.
The steam heat line has to come off before you heat to take off the top tray. That is a single pipe steam heater and it must always slope smoothly back to the source of steam so the condensate drains back and if it is not then it just quits working. Don't bend it.

Yeah I am not very surprised. I've just been holding out on buying some actual penetrating oil. I will keep in mind your suggestion and have also looked into getting liquid wrench as well. I also discovered the two hardpoints of the nuts I took off yesterday actually connect to the orange frame rather than the panels, so I put them back on for structural integrity and to ensure I do not lose them.

My new approach will be putting the machine on its back padded with lots of towels at two hardpoints where the frame lies against the panelling. My grandfather just arrived today, so he will be assisting me wrestling it as such. He also is very knowledgeable mechanically due to his corvette hobby, so he will definitely have some pointers for me during this process.
-Ryan
Using a spice grinder violates the Geneva Convention
LMWDP #612
Top

Yes, all of the plastic car owners know all about stuck and corrosion. The trick with Kroil ordering is it has a hazmat fee and is not EPA consumer certified so that is why you buy the gallon. Just insert your phony company name and they will ship no problem charged to your personal credit card. There is absolutely nothing that beats KROIL, I have used it for many years. The longer you let all of those fasteners and fitting nuts soak with a bit of KROIL the lower the probability of a failure to disassemble.
Top

Kroil is now available through Amazon so perhaps the hassle-factor is lessened.

That 14$ for 8oz, that is 224$/gallon and the main Kano site price is $60.45 + shipping which usually adds about 20$ depending. There is probably only the ORM-D add-on maybe but it is sure a lot less that that 224/gal from amazon as Kano sells that 8 oz can for 10$. ORM-D and HAZMAT are not the same cost. That 1/2 pint can will last about one old espresso machine disassembly.
Top

Okay, was thinking more along the lines of a normal usage.

I have a half gallon left of some MEK that I bought 30 years ago.

But industrial type usage/throughput is different.

Max./
Top
← Back •
By accessing this site, you agree to the site's terms of service. If you need help with the site, please contact us.