Use a string buff wheel at a lower RPM and other than the huge mess that jeweler's rouge makes the plastic ends up looking just like new after many trips through the soap and water clean-up. Dish soap cleans best of the common household products. The string buff runs cool and will not melt soft plastic easily.
Top

I have given some more thought to my electrical part of the machine. In the US my measured 2.6kW from the heating elements are too much for my 20A circuit in my house. If I switch to 110V I would also have to replace the original switch as it is only rated for 16A. I have therefore decided to replace one of the two 1.25kW (give or take) elements with a 750W element I purchased from an online italian parts company called chisko.com. I can use them through my bar friend as I am not certain they ship outside of Italy. With 2kW I can hook up the Gaggia to my house wiring with a step up transformer without issues in exchange for a slightly longer heating time. Their pricing was very good as well.

I also gave the polishing another try and now I am pretty satisfied with it. I originally just did not press hard enough against the string buff. I will also say the jeweler's rouge does make quite the mess.

The boiler and face plate are still in a citric acid bath, though they are nearing completion. I would give 2-3 days more and I will take them out for a final cleaning and scrape any remaining gasket off.
-Ryan
Using a spice grinder violates the Geneva Convention
LMWDP #612
Top

Did you picup on the upgrade of those groups to silicone portafilter seals and the E61 IMS 200 shower screen for lever groups? These are Paul Pratt products and I do not know if he still have them in stock.
Top

Last I checked they were out of stock. As much as I want to use those I would like to try out the original shower screens to see what they are like. I can always switch them out but I am a sucker for original design (besides perhaps the original gasket stack...). If they are horrific then I will keep them on standby to keep the machine complete. I also have two old new stock shower heads and I would hate to not see them on the machine at least for a little bit!

One issue I am currently experience is my O-rings for the valves seem a little too big when I fit them on. When I try to shove them into the valve they will not fit and go through. Would this simply be a simple lubing issue or do I need to purchase smaller O-rings? They are the 3.68 x 1.78 mm ones that you attach two of to each valve.

I also found out I the 750W heating element was actually out of stock from that parts supplier. I guess they are starting become unobtanium at this rate and I will need to look elsewhere!
-Ryan
Using a spice grinder violates the Geneva Convention
LMWDP #612
Top

Measure the o-ring groove width and select o-ring that is not wedged into the groove, has side to side clearance, and is just larger than the groove diameter or just smaller. Use the o-ring size tables for standard o-rings. McMaster-Carr has all the actual sizes listed.

I have had very good results for polishing various things using aluminum oxide powder on a rag or towel which was first moistened with either a thin oil (like WD-40) or just water. Another for plastic are the headlight restoration kits. The 3M kit #39084 is very good. Since it is made for clear plastic polishing it has various grits and a final compound that works wonders.
Espresso! My Espresso! - http://www.EspressoMyEspresso.com
LMWDP #644
Top

If you hook 117V to a 2200W 220V element, you end up with 750W. My guess is, unless you insulate the boiler really well and allow a very long time for warm up, that's won't be enough power and even with insulation it might still not be enough. If you could find 3600W or 4800W 220V elements they might work better on 117. 3600W elements give you 1000 on 117V and 4800W elements get you to 1350W on 117W. You might find it easier to find higher wattage 220V elements than something like a 750W element which I have trouble believing actually got made as I cant see the use. Even the smallest home machine has at least 750W elements.

ira wrote:If you hook 117V to a 2200W 220V element, you end up with 750W. My guess is, unless you insulate the boiler really well and allow a very long time for warm up, that's won't be enough power and even with insulation it might still not be enough.

I would be using a step up transformer to use the 220V if I were to go through with this, but it would still take a lot longer if it is even possible to use only one 1250W element rather than both. Perhaps it will be just easier to purchase the 110V 2kW element and get a new switch rated for 20A in that case...

The boiler is mostly clean at this point. I put it back in its tub after the following pics, but I have some questions about it. On the boiler face there is still some slight gasket residue after some polishing and brushing with 360 grit then 600 grit sandpaper. This is also the case for the boiler cap/plate. Would I still be able to make the clean connection with the gasket or is there a final way to scrape off the last of the gasket? 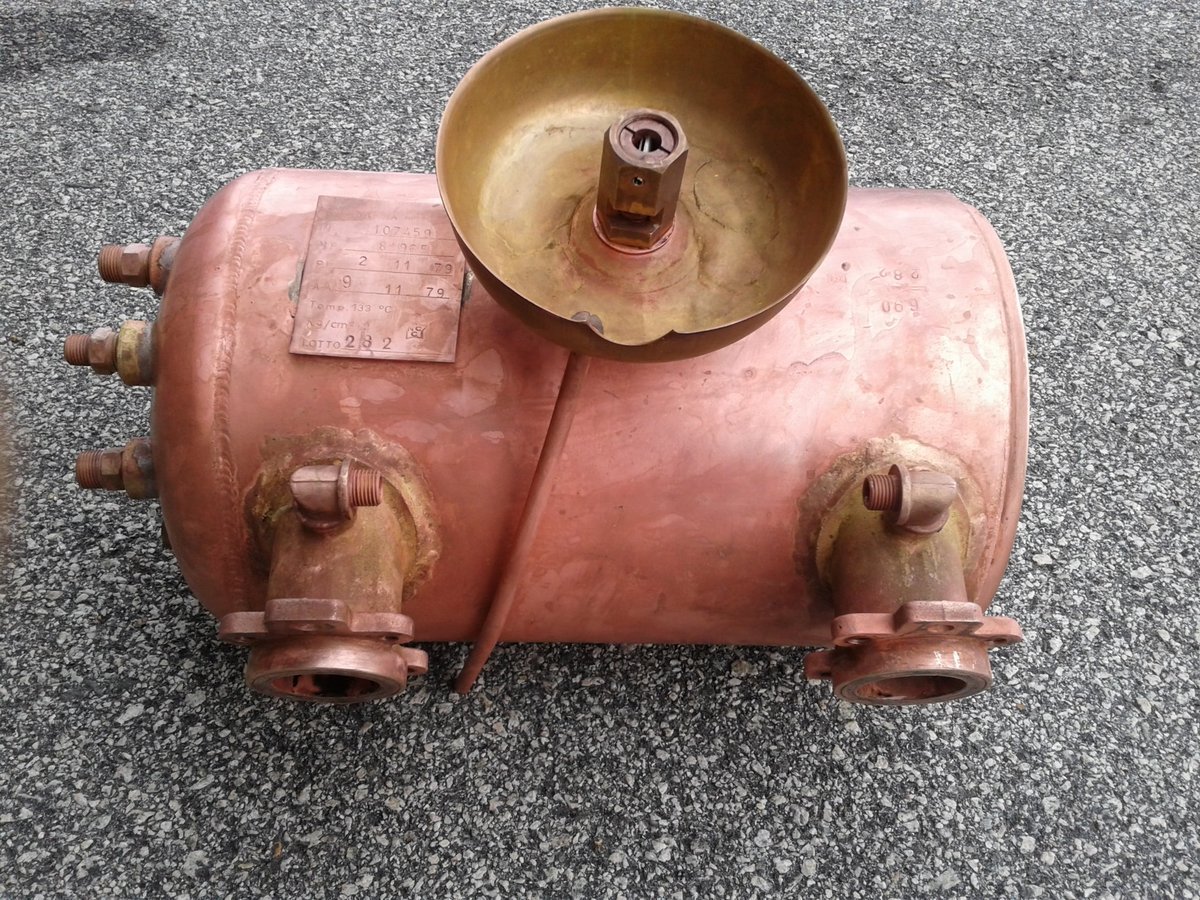 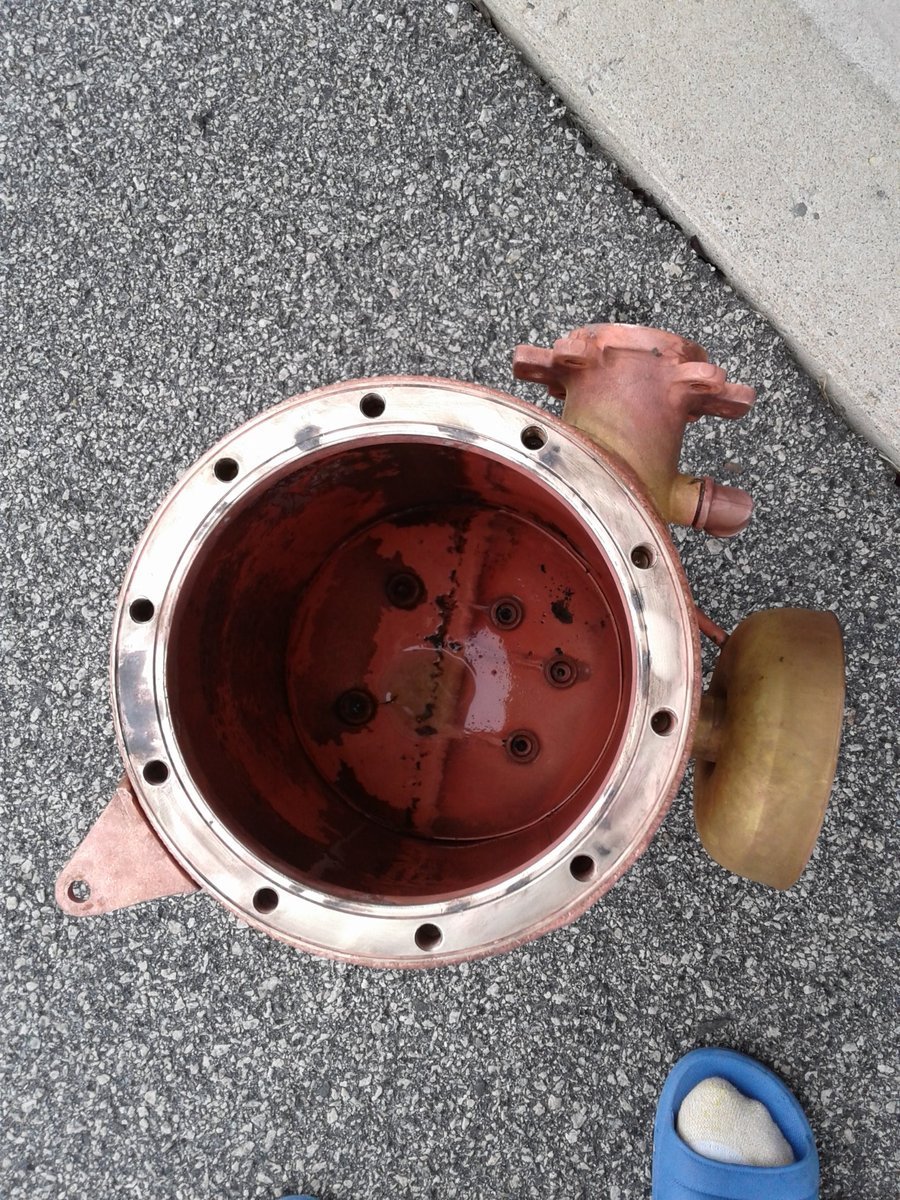 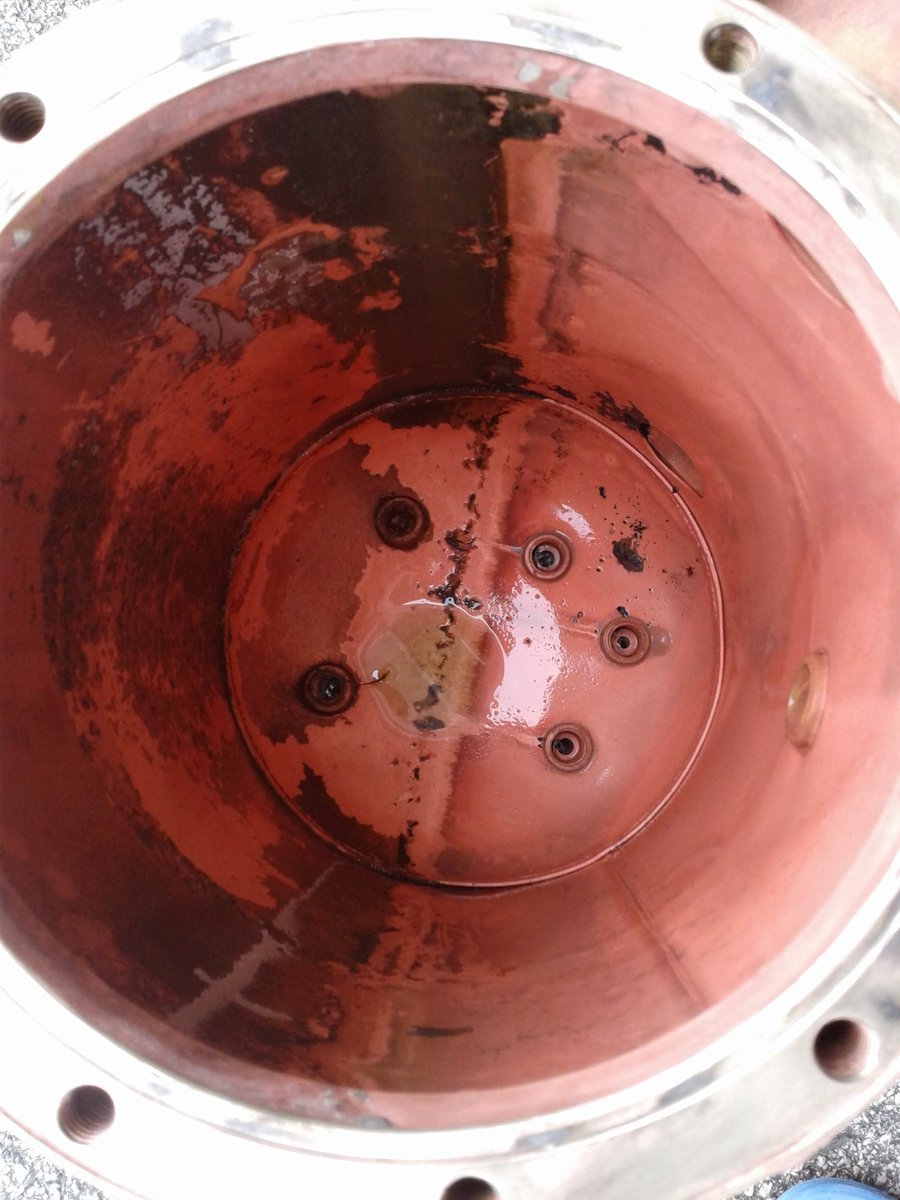 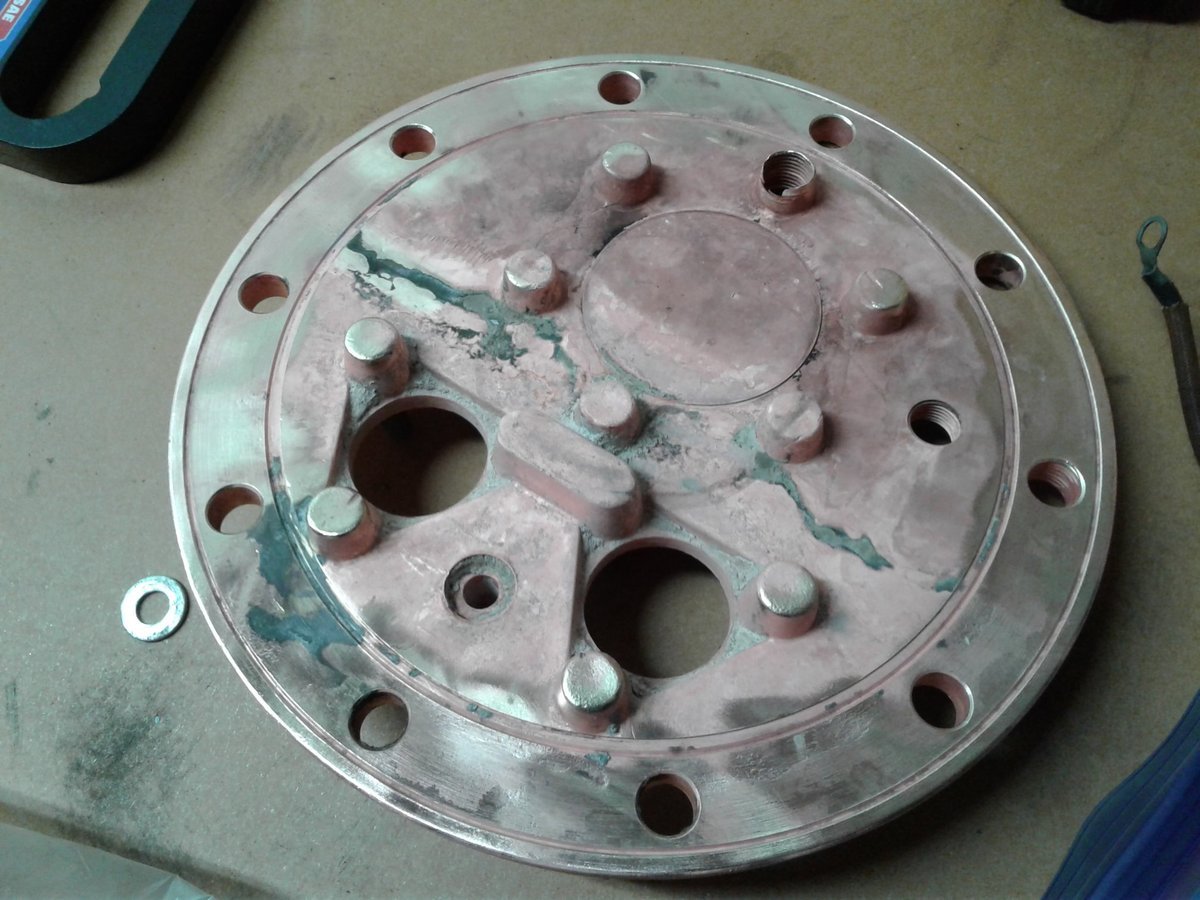 The boiler cap still has the heating element bolts attached. These are much more stuck as the double nut technique did not work. If I scrape off the residue on the bolts and gasket can I simply keep them on? Or is it recommended I take them out somehow to clean the inside of the thread? 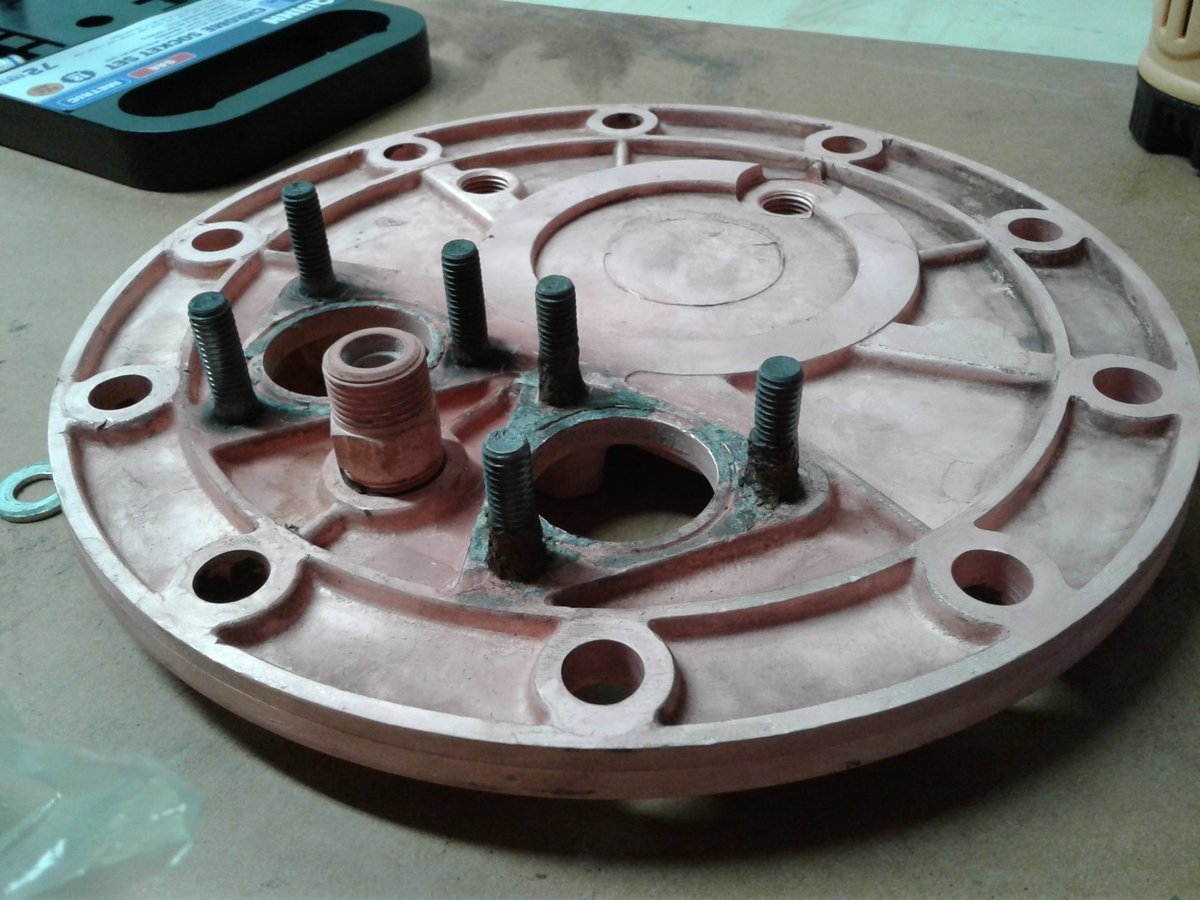 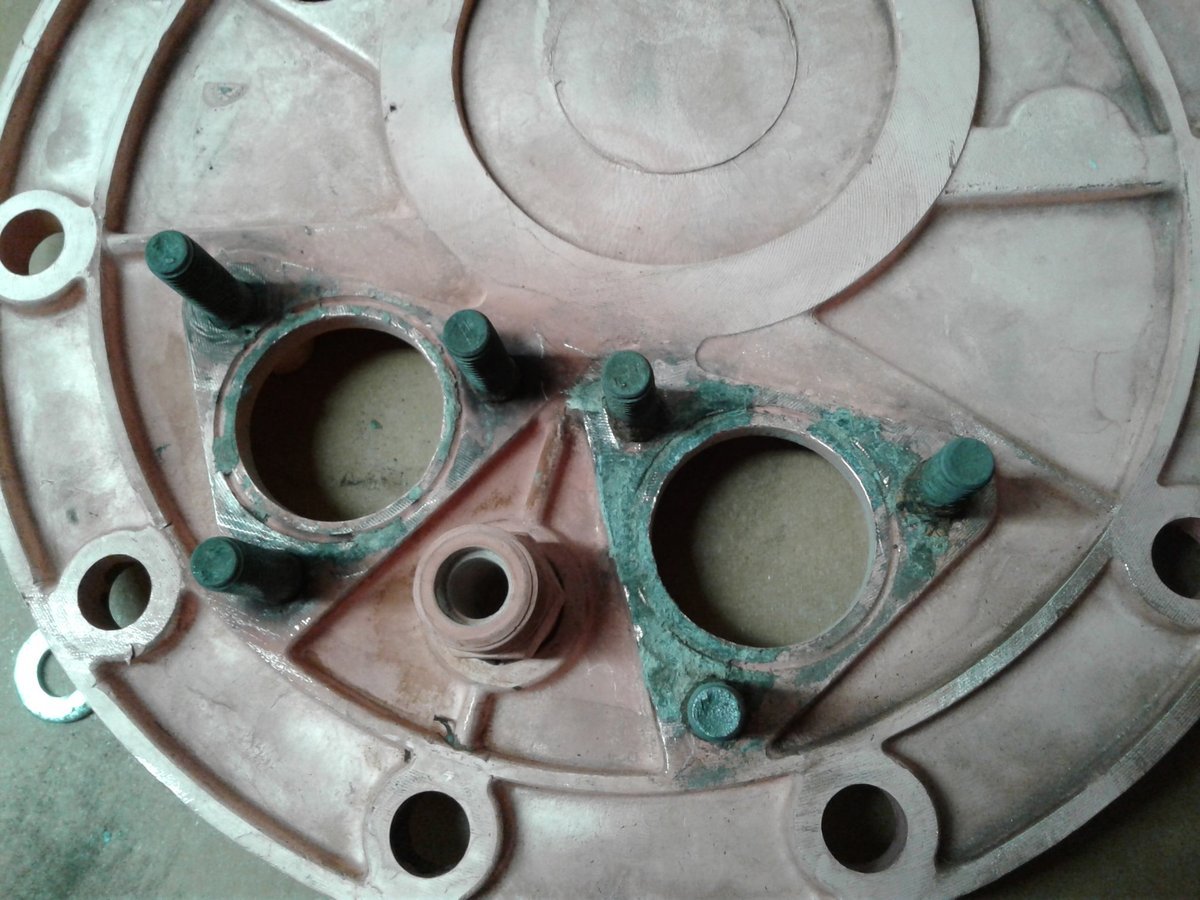 Finally, I cleaned up my inner brass pieces for the gasket stack, and I noticed my top brass pieces are smaller than the new old stock pieces I purchased earlier this year and they also have a lip for the v-gasket. Is there a reason for this design difference? 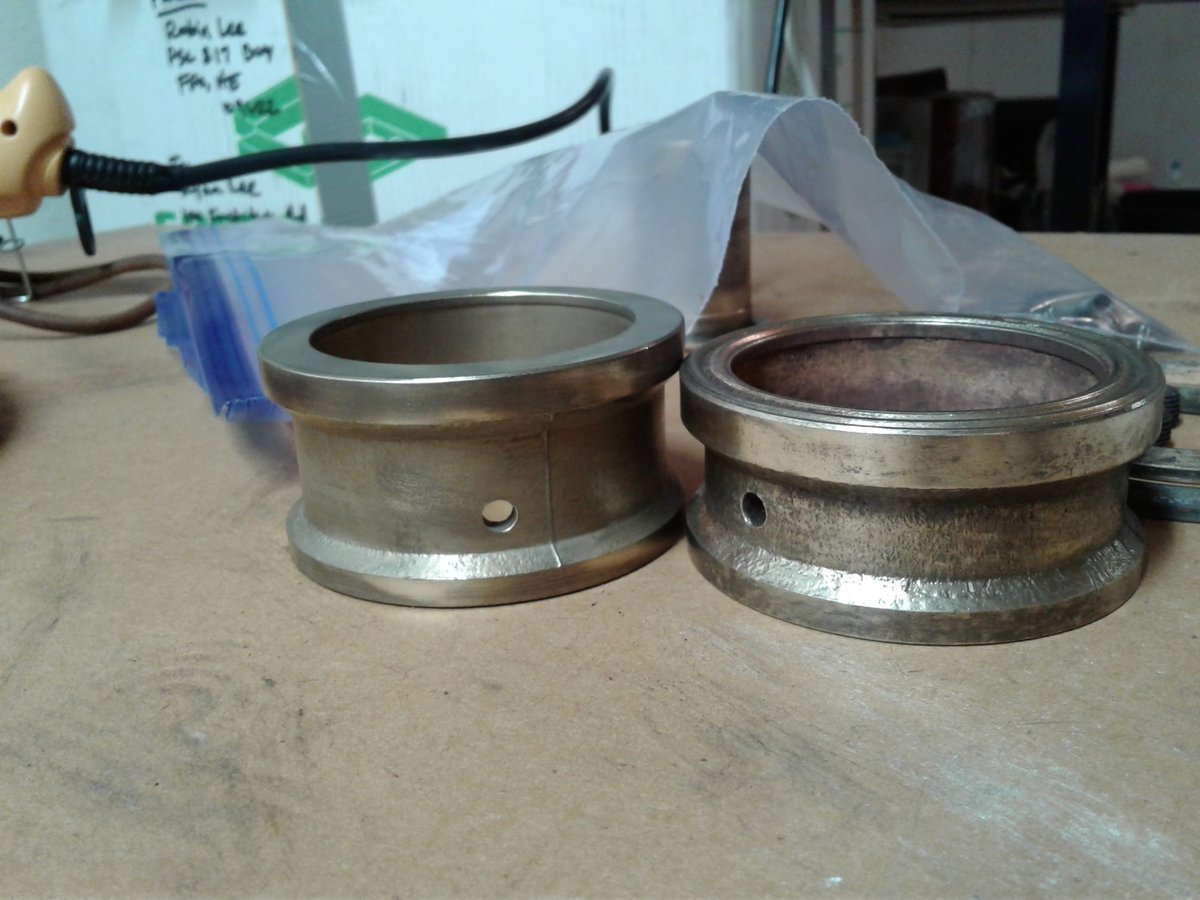 Different times and different ideas on how to build the gasket stack.

Gasket removal can be done with a Dremel and a brass wire wheel. Sometimes plain old past paint remover will get it loose and it all has to be removed if you do not want to be dealing with leaks. The element studs can stay in place and they can be cleaned in place with that same Dremel and wheel. You can use real flint or garnet paper wheels but it is a good way to get he gasket face uneven. Chemical gasket remover and plastic razor blades is the usual approach. The other thing that works are the brass bristle tooth brush parts cleaning brushes.
Top

If you have not seen this post: 1957 Gaggia America 1 group start with post #15 and you will see the issue with the original design of the dispersion screen.
Top
← Back •
By accessing this site, you agree to the site's terms of service. If you need help with the site, please contact us.