The Alexia is similar in materials and construction to the other Quick Mill machines reviewed on this site, albeit a single boiler machine. The machine case is entirely 304 food grade stainless steel and has a rigid frame design. The bottom "U"-shaped portion of the frame has rubber feet at the four corners (adjustable feet in the rear, fixed feet in front) and the the machine plants itself firmly on the counter. The machine is in no way tippy or wobbly. At 38 pounds, the machine is heavy enough to not slip or slide on the counter (even if you get a little over zealous with the portafilter), yet the machine is light enough that it is not overly cumbersome to slide it out if needed to fill the water reservoir. The Quick Mill frame is better than some two piece base or open frame designs that can be subject to flexing, bending or damage in shipment. At the request of Chris' Coffee, the new Alexia has additional slots in the bottom of the frame near the PID location as well as slots in the top and cup warmer for increased natural airflow and ventilation, keeping the electronics cooler.

Removing six flathead screws (two on each side and two at bottom rear) affords access to the inside of the machine. The water reservoir rests on a centering bracket on the "Z"-shaped panel between the reservoir and boiler. The centering bracket allows for proper positioning of the reservoir and the internal magnetic float. The Alexia is equipped with a magnetic float sensor that detects a low level water condition in the reservoir. When a low water condition is detected, power is cut off to both the pump and the heater. While this may be more important in a machine with boiler autofill features (like the steam boiler of an HX-based machine), this feature will protect the pump from running dry and losing prime and the rare case of potential pump or heater damage. 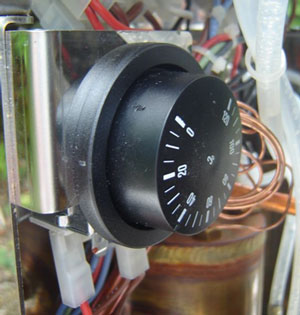 On the right side of the machine, beneath the "Z"-panel, lies the the adjustable brew thermostat for the stock configuration machine. In machines with the preinstalled PID-controller, the brew thermostat is removed. In addition to being adjustable, the Alexia's brew thermostat uses a capillary bulb in a boiler thermowell, which offers better sensitivity compared to surface mounted button-style thermostats. The thermostat can be adjusted without removing the "Z"-panel, but you cannot see the current set point without removing the panel first (requires the removal of two Phillips-style screws). Turning the thermostat clockwise increases the temperature; the original thermostat set point as delivered was approximately 100°C.

On the other side of the machine, near the bottom of the boiler, lies the over-pressure valve (OPV; also called an expansion valve). Turning the upper portion of the OPV counterclockwise decreases the spring tension against the valve and lowers the brew pressure. The OPV valve on this test machine was very simple to adjust, easily manipulated by hand. If you do adjust the OPV, ensure that you release any twist or tension in the attached silicone hose, otherwise the setting may change. Using the front panel brew pressure gauge and the provided blind filter, adjust the OPV until the reading against the blind filter is approximately 0.5 bar above the desired brew pressure.

Below the boiler, the Ulka 52 watt vibratory pump is mounted via rubber isolation pads. In my opinion, the Alexia is fairly quiet by vibratory pump machine standards. The case, cup warming tray, drip tray and cover are all tight fitting and I did not note significant rattling while running the pump.

Inside the machine, wire routing and cable-ties were sufficient. I did note some reports in the forums of Alexia machines taking awhile to get water from the grouphead when first turned on. I did not experience this issue but I did get into the habit of running the pump switch for a few seconds whenever the machine was first turned on for the day. This would ensure the boiler and thermosyphon lines were full of water.

Another report in the forums were loose or disconnected heater terminals as a result of shipment. This is hard to imagine as the wires are very firmly attached to the 1400 watt heater terminals. At any rate, the heater terminals and heating element can be easily accessed via a service door on the bottom of machine without removing the outer case. The Alexia is also equipped with a resettable hi-limit safety thermostat to prevent damage to the heating element. The hi-limit reset is located on top of the boiler and resetting is a much simpler affair compared to replacing a fusible link.

In the stock configuration, the Alexia's 0.75 liter boiler is uninsulated. As part of the optional PID kit, the boiler is insulated with ceramic felt and secured with zip ties; this saves energy and reduces the interior temperature protecting the nearby PID controller. The PID kit also includes a splash guard to protect the PID controller in the event of a leak from the steam/hot water valve located directly above. Another unique feature of the PID kit worth noting is the addition of a heater cutoff relay. This relay turns off power to heating element whenever the pump is running; this prevents the brew pressure from fluctuating intrashot as a result of increased current draw as the heating element cycles on/off. It also keeps the pump from making irritating EEE-AAA-EEE-AAA sounds as a result of the changing current draw.