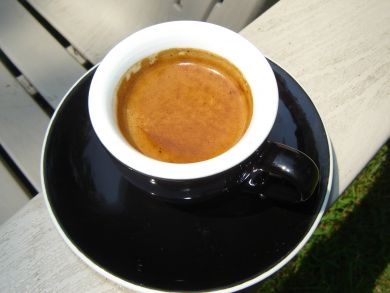 Those who are upgrading from a Rancilio Silvia or similar class machine will love the espresso performance of the Quick Mill Alexia. My "daily driver" machine for the last 14 months or so has been the Rancilio Silvia. Now don't get me wrong, I think the Silvia is a well-built machine. It has often been said that Silvia is a "harsh mistress" and I agree. My personal experience with the Quick Mill Alexia is that you can hardly go wrong, comparatively speaking. The added forgiveness of the E61 patented preinfusion and even water distribution within the group makes it much easier to pull a good shot. I've also used a few other commercial class machines without E61 preinfusion, and they aren't as forgiving as the Alexia.

Honestly, within a few shots, you should have thick, globby, honey-like espresso pours with very little effort. For the beginner, the trick to getting a good shot is consistency. It is difficult to be consistent when everything feels so "alien" as it will for the first few days of use. Eventually you will develop a drink building routine and habits (hopefully good ones) and producing consistently good espresso will become child's play.

Over the course of the review I used three different espresso grinders: the Rancilio Rocky doserless, the Cimbali Max hybrid conical, and the Mazzer Super Jolly. I was able to able get exceptional results with all three grinders, but consistently good shots were a bit simpler with the larger commercial grinders.

When the Rancilio Silvia is at its best, my informal taste comparisons of the Alexia and Silvia revealed no taste preference for one espresso machine over the other. A slight nod to the Alexia on espresso body and mouthfeel. Shots from the Rancilio Silvia seemed to have better crema appearance and persistence, which has no affect on taste. However, with the Silvia, inconsistent shots and the occasional sink shots are much more commonplace. Shot builds on Silvia seem to require lab-like precision to avoid major meltdowns. In stark contrast, the shots from Alexia are consistent and predictable. Preparing a basket for the Alexia does not require painstaking attention to detail, just a simple dose, level and tamp. The beginner and the experienced user alike can expect outstanding espresso more easily, more quickly, and much more frequently from the Alexia.

If you're just getting started, I recommend starting out using a double basket and the single spout portafilter. A good starting dose is around 16 grams of ground coffee. Depending on your coffee and preferences, 14-18 grams should be no problem. The key is that there should be adequate clearance between the puck's surface and the dispersion screen to allow water to evenly spread over the coffee early in the extraction. A bottomless portafilter is a helpful tool to confirm the evenness of the extraction. Ideally you should see the coffee evenly bead at the same time over the entire surface of the basket's bottom, form into a single cone, then extract as a brown, hazelnut stream with striping. Should you have troubles, read Perfecting the Naked Extraction, especially the section entitled Troubleshooting Checklist. For more general diagnostic advice, refer to the Home Barista's Guide to Espresso.

While it's easier to produce an even extraction at lower doses, some prefer the flavor profile of an "updosed" espresso. They can have a richer, deeper flavor and more body than their lower-dose equivalents, depending of course on the blend. In my experience, you will have better luck getting a bit more coffee in the basket with a convex versus a flat tamper piston to match the convex shape of the E61 dispersion screen. For those who want to experiment with large dose espressos, Jon's article Making a beautiful "naked" triple espresso offers suggestions on technique.

Let's assume you have a good grinder and fresh coffee. The goal is to dial in the grind setting to extract an espresso in 25-30 seconds. Below are the basic steps to preparing espresso on the Alexia: 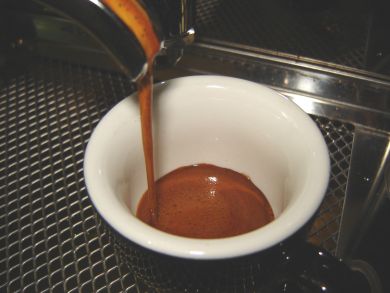 Hint: if you don't have an already warmed cup, draw water into one through the group before you start the grinder—it will help stabilize the group temperature and the cup will be warm by the time you're ready to lock in the portafilter. Over the course of the review I stopped using the cup warming tray since it was just easier and better for brew temperature stability to warm my espresso cup from the grouphead as part of the drink building process.