If Pulling shots by the Numbers seemed too easy to be true, that's because I left out one step—brew temperature management. If you have the Alexia with the PID kit installed, it really is that simple. The PID affords the user one degree temperature control precision with absolutely zero fuss. See the section to follow on PID Kit Performance.

If you have the Alexia with the stock thermostat, the brew water temperature will have some natural variation due to the thermostat's deadband (temperature range between on/off as shown in the graph below). If you want very consistent results, you need to follow a process referred to as "temperature surfing". 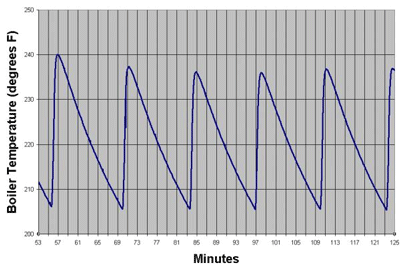 When I received the Alexia, I broke out my new "toy", a Scace thermofilter, and set to work trying to get a feel for the machine's brew temperature profile. As delivered, I was observing temperature measurements of 199-201°F at the high side of the boiler's heat cycle. I used the machine as delivered for the first week with good results as I finished up some Intelligentsia Kid O's Organic Espresso blend. Later I adjusted the thermostat ever so slightly up. At the adjusted thermostat setting, the highest temperature I registered on the thermofilter was around 203°F.

After a bit of testing with the thermofilter and visual observation of the temperature measurements, I determined that the thermosyphon and group needed to be "woken up" from a long idle period. If you just walk up and pull a shot, the brew temperature will be cool (I saw as low as 185-186°F via the thermofilter).

By trial and error, I found that I could consistently pull shots at the high end of the current thermostat setting using the following procedure:

The above surfing procedure resulted in fairly consistent 202°F thermofilter brew temperature measurements at the current thermostat setting, compared to the 10°F swing without temperature surfing.

Temperature surfing is a trial and error process. The above steps should work for other Alexia machines, but the brew thermostat setting will likely be different. The location of the thermostat's capillary tube, ambient conditions in your kitchen, etc., may also play a role in the boiler's heat cycle behavior. You could try following the above procedure to consistently pull your shot at or near the same spot in the boiler cycle, and then adjusting the brew thermostat up or down until you get the desired results. You could also try waiting shorter or longer periods of time after the heater light goes off (or on) to achieve the desired brew temperature.

Warning: Geek speak alert! The next sections cover the why and how of Alexia's optional electronic brew temperature controller (PID). Engineering types will find it fascinating, others may find it painfully boring. If you're in the latter group, feel free to skip to the next page, Steaming Performance.

"OK, so what the heck is a PID controller and what is it good for anyhow?"

Back in the day, some smart fellas (and current HB members) Greg Scace and Andy Schecter decided to add a PID (proportional-integral-derivative) controller and thermocouple to their home espresso machines to replace the wide deadband (30°F!) and non-adjustable brew thermostat. They started a craze that has lead to improvements and advancements in both the home and commercial espresso world with regard to brew temperature management and control. 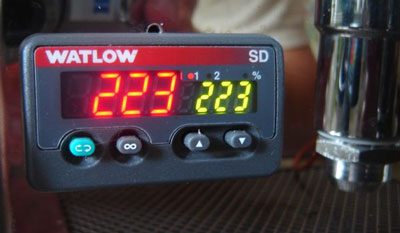 By replacing the stock thermostat with a PID controller, and spending some time properly tuning the controller, brew temperature set points can be set in 1°F increments, but actual intrashot brew temperatures control fluctuates based on many different machine-specific variables (location and precision of the thermocouple, PID controller, ambient temperature, temperature of the inlet water, machine hydraulics, etc.). What a PID controller offers to the typical end-user is repeatability or consistency and adjustabilty. When you walk up to use the espresso machine, the waiting brew water is at some steady-state value, X. You shouldn't really care what the value of X is, you can just be thankful that it is consistently X, and not Y, or Z. The starting brew temperature of an espresso boiler controlled by a traditional thermostat could be any temperature value within the range of the deadband (as great at 30°F as noted on some machines).

This article does not discuss the installation of the PID kit because it comes with a 40+ page document covering it in exacting detail. If you want an idea of what's involved, refer to the The Bench thread "Buyer's Guide to the Quick Mill Alexia". Although the documentation is written clearly and accompanied by a panoply of photos, you should consider letting the professionals at Chris' Coffee handle it if you are the least bit hesitant about installing the kit yourself. The fee is a reasonable $50 to install it before shipment.

For the technically minded, let me share just a few notes on the kit. It is complete and well thought out. Everything you need to install the PID temperature controller and insulate the Alexia boiler is included:

There are no wires to cut or strip, everything is pre-assembled for you to simplify installation. As mentioned earlier, the PID kit installation manual is very thorough and detailed (40+ pages with pictures). Could you put together a kit yourself? Sure you could, but it may be 'penny wise and pound foolish'. It would take a considerable investment in time and resources to source all the items, implement and test the configuration and have no vendor support in the end.

Below are graphs showing intrashot and intershot performance with the Alexia PID kit (with heater-cutoff relay) installed. This procedure was followed: 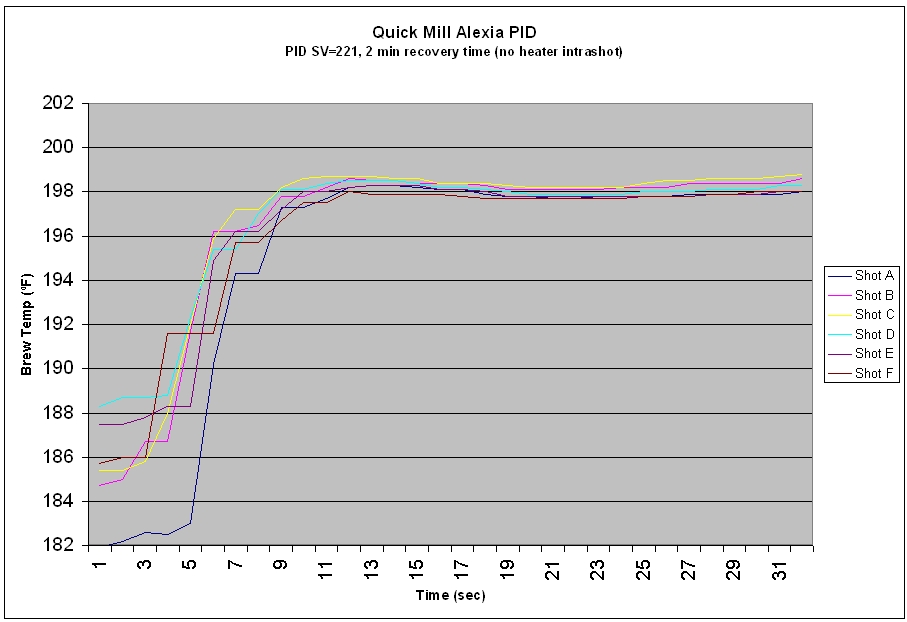