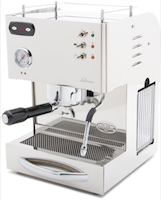 Along the continuum of espresso machine choices, the Quick Mill Silvano is not easily categorized. Thanks to its innovative design, it's priced less than other espresso machines capable of brewing and steaming at the same time. For the first-time buyer, it may well solve the dilemma for those who want to prepare espresso and cappuccinos back-to-back, but aren't willing to stretch their budget to a semi-commercial choice. I'll return to this point after a quick reminder of the "five C's" for those new to the home espresso scene.

Summary of the five C's

If you're an espresso lover who has decided to buy your own equipment, the first question you probably asked yourself is "How much am I willing to spend?" After some initial investigation, the next question you asked was probably "Does an espresso machine really cost that much?!?" While the cost of quality espresso gear may come as a surprise to the newly initiated, it's worth understanding why it may be worth increasing your budget. For the purpose of the reviews you'll read on HB, the main considerations are the five C's: Capability, Consistency, Convenience, Capacity, and finally Construction.

Before returning to the Silvano, if you haven't already read it, I recommend skimming How to choose an espresso machine and grinder at the "right" price the better understand the decision criteria underlying this review.

The Quick Mill Silvano is well-proportioned for modern kitchens; allow approximately 22" of counterspace for the espresso machine and grinder. If you have extra space, the steam wand extends to the right for conveniently maneuvering it into the milk pitcher, but you can also position the wand forward if space is tight. The Silvano fits easily under standard cupboards with enough clearance for cups. Depth-wise, the Silvano demands very little, requiring a mere 13" for the machine itself and a few more inches for the portafilter handle when in use. The driptray is voluminous, but it's only four inches deep front-to-back; expect to wipe stray drops from the countertop after flushing the group.

Operationally, the three toggle switches on the right are where the action starts:
The display on the upper left is the brew temperature controller, frequently called a "PID". The ease of temperature management and forgiving nature of the Quickmill Silvano showed itself on the first day. If you follow a few guidelines, choosing the desired brew temperature is nearly "set it and forget it" simple. 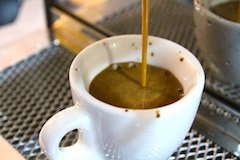 To evaluate the Quick Mill Silvano's espresso potential, a group of coffee professionals and local espresso enthusiasts compared it with a commercial espresso machine, the La Marzocco Strada. The first evaluation was not blind and featured a demanding espresso, so I repeated this comparison in a blind taste test using the same equipment (Strada/Silvano) and Counter Culture Coffee's Rustico. In recent iterations, this blend has proven useful in tests because it reacts predictably to temperature changes / dose changes.

The blind taste test findings largely replicated the group results from the day before. Of the four rounds, the Silvano won two by a hair, tied once, and the La Marzocco Strada won one round by a wide margin. The "best of show" espresso was really really stellar with a delightful balance of chocolates and fruits, plus a dreamy texture. While the other rounds were very good espressos, I wasn't able to reproduce the best-of espresso again before caffeine overload interrupted. There's a lesson to be learned there: Even with the best of equipment, a certain measure of exceptional espresso is pure serendipity.

Before moving onto steaming performance, a brief point about the Silvano's brew temperature management: The boiler's LED temperature readout is only meaningful when the machine is idle; once the pump switches on, the readout fluctuates because the probe is intentionally mounted near the water inlet on the boiler to improve response time. However, the actual brewing temperature at the coffee puck rises rapidly and holds reasonably steady over the course of the extraction. I confirmed this point as was demonstrated by Chris Nachtrieb in this video. Also note that like most espresso machines, the Quick Mill Silvano requires that the barista flush water through the group to establish thermal equilibrium. If it's been idle for a long time, flush for 10 seconds and then wait 2 minutes for the group to restabilize. The recovery time between shots is around two minutes; you should flush water briefly at the end of the extraction to clean the dispersion screen.

The Quick Mill Silvano has a single boiler dedicated to brewing; it has a thermoblock fed by a separate vibratory pump for steaming, thus enabling it to brew/steam simultaneously. Espresso machines equipped with thermoblocks typically steam more slowly and the steam is wetter than the steam from a boiler. The Silvano's steaming is indeed slower compared to prosumer equipment, but it is fast enough for many buyers who are serving a couple drinks in succession. Additionally, the steam seems as dry as typical espresso machines in the entry-level class.

The Silvano required 75 seconds to steam 8 ounces to 160°F; it added approximately twice the amount of condensed water as the best-in-class La Marzocco Strada. Compared to 45 seconds of a best entry-level steamer like the Rancilio Silvia, the Silvano does steam more slowly than its top-performing peers, but its time is within the range of its class. Quibbling about speed for large milk drinks aside, the Silvano's steam quality has a nice balance of volume, velocity, and dryness.