Espresso is a small, made to order, concentrated coffee consisting of liquid topped by foam, or crema. The liquid and crema are each multiphasic systems consisting of an emulsion, a suspension, and a solution.

Crema is composed primarily of CO2 and water vapor bubbles wrapped in liquid films made up of an aqueous solution of surfactants. Crema also contains suspended coffee bean cell wall fragments, or fines (responsible for "tiger striping," or mottling), and emulsified oils containing aromatics. The liquid phase of an espresso consists of dissolved solids, emulsified oils, suspended fines, and an effervescence of gas bubbles.

What follows is a general overview of espresso percolation. This section is not intended to be comprehensive, but rather to introduce the fundamentals. 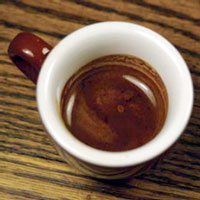 Espresso is produced by the percolation of pressurized hot water through a tightly packed bed of finely ground coffee. The water erodes solids and oils from the surfaces of the coffee particles as it flows through the coffee bed and deposits the solids and oils in the cup. The flow rate of the water through the grounds is determined primarily by the amount of pressure applied by the machine, the mass of the grounds, and the fineness of the grind. Higher pressure, up to a point, increases the flow rate; beyond that pressure, flow rate decreases. A larger dose or a finer grind produce greater flow resistance and a slower flow rate.

Channels are detrimental to brew strength and flavor. The large volume of water flowing through a channel dilutes the shot and causes the grounds along the channel to overextract, increasing bitterness. Because less water passes through the denser areas of the coffee bed, those areas underextract, resulting in underdeveloped flavors and lower brew strength.

Note:The terms "overextract" and "underextract" are subjective; by using them I do not mean to imply there is a universally agreed-upon ideal level of extraction for coffee, tea, or espresso. Instead, the reader should interpret overextraction as a general reference to extracting more than the intended amount, usually to the point of excessive bitterness or astringency. Underextraction is meant to indicate less extraction than intended, usually such that the resulting beverage has insufficient flavor development.

To minimize channeling, a barista should prepare a bed of grounds so it has a smooth and level surface, forms a tight seal with the wall of the portafilter basket, and is of uniform density. Evidence of channeling can sometimes, but not always, be seen when using a bottomless portafilter. Channeling is indicated when extract flows more rapidly or yellows more quickly from some areas of the basket than others.

The Role of the Barista, Grinder, and Espresso Machine

The Barista's Role: When preparing an espresso, a barista's basic goals should be to:


The Grinder's Role: The grinder is the most important piece of equipment in an espresso bar. Grinders are usually overshadowed by more expensive, flashier espresso machines, but grinder quality is arguably the single most important factor in preparing a great espresso.

A quality grinder must:

Fines play many important roles in espresso percolation; these will be discussed in detail in Chapter 3. For now it is important to know that the brewing water can transport and deposit fines lower in the coffee bed during percolation, a phenomenon known as fines migration. When fines and large insoluble protein molecules are deposited at the bottom of the coffee bed they can form a compact layer, or densely packed solid mass. A compact layer clogs holes at the bottom of the filter basket and can result in obstruction of flow paths, uneven resistance to flow, and channeling. It is desirable to have some fines, but too many fines or too much fines migration can damage espresso quality.

Additional Sections in the Printed Edition:

The Phases of Espresso Percolation
Brew Strength and Yield: Espresso