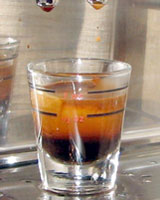 All the lever espresso machines included in the Smackdown, including the Lusso, have a steam boiler that also supplies the brew water. Since the water exiting the steam boiler is too hot for brewing espresso, the grouphead acts as a heat sink, drawing down the water's temperature into brew range. For those levers with the grouphead attached directly to the boiler, its only a matter of time until the grouphead loses its ability to reduce the water's temperature, rendering subsequent espressos hot and bitter. Baristas can employ tricks like applying a cool wet towel to the grouphead or locking in a cold portafilter, but these extra steps aren't necessary for the Lusso since its grouphead naturally resets to a modest working temperature if allowed around three minutes between extractions.

Because the Lusso uses its steam boiler water for brewing, the brew temperature profile is "humped"; that is, it rises very rapidly as the steam boiler water enters the group and then falls quickly under the influence of the grouphead's thermal mass. I believe this unique brew temperature profile may account for lever aficionados' reports that their espressos have distinct varietal flavor characteristics. Another unique characteristic of spring-powered levers is the shape of their brew pressure profiles. Unlike electric pump-driven espresso machines whose pressure is constant throughout the majority of the extraction, a spring-powered lever espresso machine like the Lusso peaks at 6 bar and slowing declines to 4 bar. Most agree that this reduced brew pressure mellows flavors, which can play to a particular coffee's strengths. For example, coffees that are exceedingly bright or dominated by roast notes can be nicely tamed under the gentle influence of a spring-powered lever espresso machine.

With the Lusso, when I do things right, it produces espresso with very creamy texture and pronounced sweetness. Heck, I bet the Lusso could produce drinkable espresso using coffees so bright that they would make your brain pucker if brewed with a 58mm portafilter equipped pump machine. Smackdown participants and I agreed these attributes come at the expense of flavor clarity. On the other hand, this being a manual espresso machine, you are free to tweak variables that would be impractical for pump-driven espresso machines at the same price point. For example, the barista can lengthen or shorten the preinfusion simply by holding the lever down as desired on the first stroke (I found that around 3 seconds produced the best balance between even extraction and clarity). Similarly, the number of pulls that a given barista prefers varies from one, 1-½, two, and even more pulls (I found that 1-½ pulls, the so-called "Fellini Move", maximized the volume and flavor without significantly impacting body and finish). Keep in mind that the instructions provided in this section are only a starting point for your exploration into what techniques deliver the best balance of flavor, texture, and aftertaste.

One, two, or more pulls?

As noted in the prior section, some lever aficionados prefer one pull, some prefer two, and others prefer the hybrid 1-½ pulls, or Fellini Move. For those new to lever-dom, allow me to elaborate on the reasons behind these choices. Ideally, levers would require only one stroke to avoid the risk of fracturing the puck on the upstroke, but these small manual pumps can only generate so much pressure for a given volume of water. Thus a true double espresso means more than one pull for most home lever machines, and the risk that the puck may get thrashed during depressurization/repressurization. The effect is worse if the puck has lots of headspace since it potentially loses adhesion as it is "vacuumed" during the upstroke.

My best results are with the Fellini Move (effectively 1-½ pulls), 2-3 seconds of gentle preinfusion, back up gently to refill, followed by slow release. The brewing ratio is 100% for one pull ristrettos (i.e., 11 grams of coffee in, 11 grams of liquid out) and 60-70% for a full two-pull espressos. Pay close attention to smoothly pushing down the lever to raise the piston / compress the spring and gently releasing to begin the extraction. If done properly, the second pull extraction tastes like strong coffee from a moka pot. For most coffees, it balances the espresso's strong-ristretto flavor with only a small impact on the body.

Specifically for the Lusso:


In summary, recocking the lever means that the volume of the chamber increases and air comes from somewhere— and the path from that somewhere passes through the puck. The wet coffee cake is easily disturbed during recocking. Visual clues that the cake is disturbed comes when the lever is released and the extraction stream becomes disorderly, thin, and sprays all over the place. Recocking early, before the piston has traveled its full displacement seems to helps, i.e., the extractions are more viscous and much more orderly. Shots pulled in this manner have more body than espressos of similar volume that were pulled with lever recock taking place later in the extraction. You may find that reducing headspace above the coffee also seems to help keep the cake under control; I dosed around 11 to 12 grams as the best tradeoff between a balanced flavor profile and even extraction during the second pull. With the Fellini Move trick, you can get a full stroke with the puck already wet, producing very close to a true double, if that sort of thing matters to you. 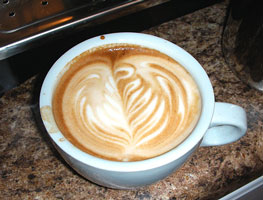 The Lusso is a genuine no-fuss espresso machine. For dosing, fill the double basket to the top and level cut with your finger or straight edge for a dose of 10-11 grams of coffee. If you prefer to updose, level the grounds and then tap the portafilter to settle them; this will make room to dose a smidgen more coffee. If done correctly, locking in and then removing the portafilter will leave no hard impression, though the puck's surface may make gentle contact with the dispersion screen without disturbing the puck/basket adhesion.

Let's assume you have a good grinder and fresh coffee. The goal is to dial in the grind setting to extract an espresso in 25-30 seconds over the course of two pulls. Below are the basic steps to preparing espresso on the Lusso:

Once the brew chamber has depressurized, remove the portafilter and hold a 12 ounce pitcher up to the bottom of the grouphead. Rinse off the grounds stuck to the dispersion screen by pulling down the lever. Pay attention! The pitcher should completely enclose the bottom, otherwise you risk burning yourself!

Reminder 1: When refilling the boiler, always allow the boiler to cool for 5 minutes once the cap is removed—this prevents a cold water shock to the heating element which could burst if it is still super hot. This applies to all lever espresso machines.

Reminder 2: During the review, I took a couple days off from the Lusso and before starting the next session, I thought about the "stale water" comments that come up occasionally, though typically in the context of the perennial heat exchanger versus double boiler debates (e.g., Tasted Your Reservoir Water Lately?). Since the Lusso has a fairly large boiler, it stands to reason it would potentially suffer from this problem. So I let the boiler come to temperature, drained a cup of water, and let it cool for 30 minutes before tasting. After two days, yes, there was an unmistakable metallic / stale taste to the water. Thus the moral of the story: If you want the best tasting espresso, drain the boiler each evening using the water tap.

Once you're done with your espresso, it's time to clean up. The Ponte Vecchio Lusso does not have a brew chamber pressure release mechanism; if you remove the portafilter before pressure has leeched away, it will be blown off forcefully by a messy mixture of very hot water and coffee grounds, a phenomena referred to as the "portafilter sneeze". Either wait three minutes before removing the portafilter, or try this trick:

Push the lever just short of half way. This will introduce air into the brew chamber and relieve the water pressure, avoiding the dreaded portafilter sneeze. Confirm the pitcher is underneath the portafilter to catch the last dribbles and unlock it. There will be a small puddle of water on top of the puck; turn the portafilter over the sink to drain and knock out the wet puck into the knockbox.

The fact that the Lusso has a 3 liter boiler means that it has a nice big reservoir of available heat with which to produce steam, despite the fact that the heating element power is only 1kW. The wand is easy to use. I made excellent milk on my first try. Since the wand does not move, one must tilt the pitcher in order to induce swirling. Thanks to the location and angle of the steam arm wand, no water condenses in the tubing. Nice!

Months have gone by where I only drank cappuccinos when family or friends visited. The cappuccino pictured above is typical of the milk's texture and my modest latte art skills. I made my job more difficult by using a 20 ounce pitcher because the smaller 12 ounce pitcher was employed as the "dispersion screen spritz" receptacle. It turns out the 12 ounce pitcher opening just encloses the bottom of the grouphead, which makes it ideal for a quick rinse (remove the portafilter, raise the pitcher's mouth over the bottom of the group, pull the lever... instant clean screen). Nonetheless, this cappuccino looks OK and tasted great.

I've never gotten the hang of leaf details on cappuccinos; the thicker microfoam always has soft edges. Before steaming, I warmed the cup using the water tap, a unique and handy feature among home lever machines. It splatters a little, but it's easily manageable if you open/close the valve slowly. The steam is vigorous, though it does fade towards the end of the texturing phase. You can avoid this by paying careful attention to the heating element cycling and beginning to steam the milk just before it turns off; otherwise try pausing for a moment to let the boiler catch up for larger volumes (9 ounces in the 20 ounce pitcher instead of 6 ounces in the 12 ounce pitcher). The reward will be much better rolling and mixing action, which helps break up larger bubbles that you'll otherwise have to "thunk and swirl" away.

Below is the time required for heating water from 40°F to 160°F. Although the Lusso may be slower for multi-serving sized volumes of milk, it's more than adequate for the 4-6 ounces you'll typically need for a single cappuccino.


Reminder: The Lusso's steam tip is permanently mounted and has three tiny holes. Remember to purge a bit of steam after each pitcher to avoid clogging the tip!