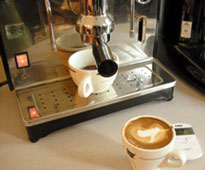 Knowing that some potential buyers might be put off by its small-volume espressos, this section documents my routine for building a large(r) cappuccino booming with chocolaty coffee flavor. My preference for cappuccinos with the Lusso is one 12 gram double pull espresso served with 3-4 ounces of milk in a smaller tulip-shaped cappuccino cup (e.g., the ACF cups with capacity of 5 ounces). Since working with the Lusso on this routine, I'm enjoying its delicious chocolaty quad ristretto with 3-4 ounces of milk, which I've dubbed the Workday Eye Opener. Preparation time from start to finish is 3 minutes or less, perfect for the morning rush.

The water displacement of some home lever espresso machines is small; the Lusso's is in fact very small, 16 milliliters per stroke by my measurements (1). Combining preinfusion volume and multiple pulls, the Lusso produces a beverage with a brewing ratio commensurate with a double ristretto. The "big gulp" crowd may initially be disappointed by the volume of its diminutive cup, but I and other Smackdown participants did not see it as a serious concern:

My opinion of the Lusso right now is that one shouldn't get too hung up on the double pull thing. It's only a big deal if you absolutely have to have big shot volumes. If, on the other hand you're flexible and observant, you can get some pretty killer coffee for your 1100 bucks. The Lusso is very tolerant of coffee. Brightness and distinct flavors are diminished compared to my benchmark machinery. Whether or not that is your cup of coffee is up to you.


To prepare the Eye Opener in record time, get two double baskets and remove the basket retention spring from the portafilter so you can insert/drop out the basket easily. If you prefer to work with the basket locked into the portafilter and a knockbox, no problem, it just adds a little to the overall preparation time and also means the crema from the first espresso sits a little longer. I use a 12 ounce pitcher filled with milk to the bottom of the spout (around 4-5 ounces); you can steam a bit more milk to make a latte (7-8 ounces). With these caveats out of the way, time to get moving!

Notes and reminders referenced above

(1) Measured with a Scace thermofilter by filling the brew chamber completely and capturing the flow from the start to end of the stroke.

(2) Note the angle of the lever at which water is allowed into the brew chamber. The water entry port is located above the midway point of the lever stroke. Be certain the portafilter is engaged in the grouphead channel and just shy of tight before pushing the lever down, stopping at the halfway point. Note: If operated incorrectly, your hand could be sprayed with very hot water and steam. Always move slowly and deliberately; most importantly, pay attention!

(3) Note the angle of the lever at which water is allowed into the brew chamber. The water entry port is located above the midway point of the lever stroke. To avoid a "portafilter sneeze" of hot water, steam, and wet coffee grounds, do not unlock the portafilter unless you have waited several minutes for the brew chamber to naturally depressurize or use the quick pressure release technique described above. Note: If operated incorrectly, your hand could be sprayed with very hot water and steam. Always move slowly and deliberately; most importantly, pay attention!

(4) DISCLAIMER: The instructions above have been described for informational purposes only because espresso hobbyists have expressed an interest in it. Espresso machines contain controls and conduits for electricity, very hot water, steam and high water pressure. Failure to follow the prescribed precautions and/or exercise good judgment could result in serious injury. The author accepts no responsibility for any injuries resulting from any attempt to follow these instructions.