Offer your ideas on how to improve the site or report problems.
← Back to News • 6 posts

Before the month of January slips away, I would like to offer a brief review of the site's inaugural year and the individuals behind it. For those of you new to the site, the domain was registered January 24, 2005 to host equipment reviews. The mockup home page was nothing more than select links from my browser favorites: 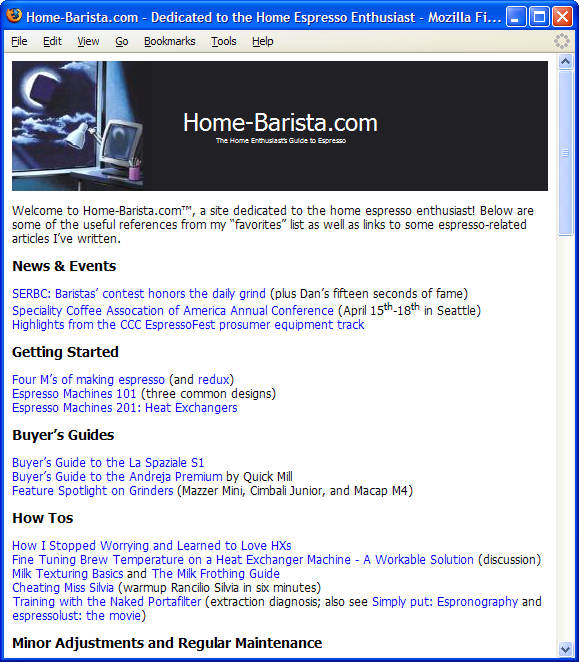 The forums were opened April 29th after it became clear that a "read only" medium wasn't sufficient for what I hoped to accomplish, such as transforming the solitary task of equipment reviews into a shared experience. Chris' Coffee was the first site equipment sponsor, followed by EspressoParts.com and then 1st-line equipment. Intelligentsia Coffee Roasters agreed to be the official test espresso provider. Only a few months had passed and things were moving along well, however it became clear that the site would not evolve without help from others.

With that preamble, allow me introduce some of the players behind the site's first year...

Thanks to my participation on CoffeeGeek, I already had established a number of online relationships with other espresso enthusiasts. In wanting to encourage a more rigorous approach to espresso, one guy kept coming to mind: Chris Tacy. He's a professional barista, which is cool, but he also consistently demonstrated that he was willing to patiently advise anyone who asked for help. Chris greeted my invitation to help moderate with the brief question: "What exactly is involved?"

Apparently HB struck a chord with Chris because he quickly grew to be the #2 poster (740 to-date). He also enthusiastically embraced the novelty of making espresso at home in his Mia and Bricoletta write-ups as part of the Pro's Perspective series. His engaging writing style and thoroughness proved very popular, especially among members following his research on the Bench. The real coup for 2005 was his write-up of the La Marzocco GS3, which has launched a new round of equipment lust like none I've witnessed before.

Speaking of coups, nobody can touch Abe "Deal Maker" Carmeli. He joined in May and has led several of the hottest discussions of the board. The Versalab M3 Grinder review was the first thread to crack 10,000 views in one month. Weeks later he interviewed the man behind Versalab, John Bicht, in what was an amusing, insightful and enlightening piece. Next was the heavily researched Brewtus review. On top of all that, he somehow scored a one group Synesso Cyncra for a Bench test drive. Hey Abe, was there a memo that I missed?!?

Long-time friend Steve Robinson also joined in May. He's a hardcore lever guy from way back. Steve's knack for explaining minute details with equal measures of humor and enthusiasm attracted a microcosm of similarly enthralled home baristas. The updates to his Olympia Cremina restoration project revealed the innovations that so enamored lever aficionados to this expensive Swiss espresso machine; Steve's ongoing write-up of the 2002 model further explains how the design continues to evolve. The Lever Espresso Machines forum was Steve's creation and, given the popularity of the forum, he clearly identified a group that had been overlooked in more general venues. The LMWDP designates his building membership within the HB ranks.

Bob Roseman and I also met online through CoffeeGeek back in 2004. Later we met in person at the SCAA conference in Atlanta where we hung out at the cMembers sessions. Although he doesn't post as frequently as other members of Team HB, his contributions behind the scenes proved invaluable during SwagFest. He helped define the judging criteria, rules, and saw the results through statistical analysis discussions that lost me more than a few times. Should you meet Bob, listen to his advice, whether it's on life or espresso. It's gold.

When I had the idea of opening a new espresso forum, the first person I contacted was Jim Schulman. His sage advice and calm demeanor dates back for years on alt.coffee and as moderator on CoffeeGeek. Much of what I've learned about espresso, I owe to him. Unfortunately he didn't share my enthusiasm for "yet another" website (he obviously joined the HB membership despite his reservations). Part of the HB mission is documenting the key techniques and background information needed to bootstrap your average home barista's initial learning. My own how-tos included Espresso Machines 101, How I Learned to Stop Worrying and Love HXs, and Perfecting the Naked Extraction. There was clearly a gap, and Jim's slide presentation at the 2004 SCAA cMembership track was an ideal candidate for transformation into an excellent article. He agreed and the popular Home Barista's Guide to Espresso is the result. In addition to his public contributions, he also offers clear-headed guidance on site policy decisions.

There are others like Jim whose contributions go on behind the scenes. To boost the engineering reality quotient of the site, robotics engineer Sean Lennon and mechanical engineer Lino Verna are in charge of what we refer to as HB's "special ops." I would tell more, but that requires security clearance.

Let me close by thanking the site sponsors, not as businesses but as individuals. Chris Nachtrieb, owner of Chris' Coffee and outspoken New Yorker. He tells it like it is, four-letter words included. Jim Piccinich, 1st-line partner, lives a short distance from Chris. Don't let rumors of a rivalry between Jim and Chris fool you, it's a New York / New Jersey thing. Seriously. Terry Z and Dave White are behind the machinery of espressoParts.com, and ardent supports of HB. Thankfully they tolerated my weekly query, "Hey, is the HB tamper in yet?" Matt Riddle (2006 Great Lakes Regional Barista Champion!) and the crew at Intelligentsia Coffee were the first to sign up as official espresso supplier. I was a long-time fan of their coffee before the site existed and deeply appreciate their continued support. Finally, HB has a small group of local supporters, who all meet at Counter Culture Coffee. Peter Guiliano reliably welcomes us to their espresso lab every Friday. The company's motto is "coffee driven people, people driven coffee" and that extends to their support of home baristas. Thanks guys and gals at CCC!

A belated Happy New Year to all who visit HB, and my wishes for a year filled with health, happiness, and exceptional espresso!
Dan Kehn
Top

Congrats, Dan --- lots of work and it shows.

Thanks Dan. I have really appreciated the professionalism and objectivity of this site.
Hal Perry
Top

Thanks to HB, I have started an uncontrollable tailspin down the espresso obsession vortex and the never ending search for a perfect shot. Good content and good people make all of the difference and transform a 'forum' into a 'community'.

Most of what I have learned in the past year has come from HB. I have been invited into homes and met many wonderful people. I thought my machine lust would be satisfied after I finish my Faema two group rebuild, then I got to pull some shots on Barry's bionic LM, owe well, once again unto the breach.

Many thanks Dan.
Dave Stephens
Top

HB wrote: Hey Abe, was there a memo that I missed?!?

Yes there is: you deserve more credit than all of us at team HB put together. I don't know how you do it and manage to have a life, four kids and a day job. So kudos to you HB, and may the espresso Gods shine on your ass until it is ripe and tender.

We love you, and we don't say it often enough. (Now don't get all mushy on me, it's a once a year thing).
Abe Carmeli
Top

Ditto, except for the part about your ass.
Dolce Vita,