Imagine two baristas pulling morning shots to "dial in" their equipment. After a few pulls, the espresso is still wanting. The conversation might go like this:

Barista 1: Whoa, what was that? It's harsh man, the grind is off.
Barista 2: Maybe you're right, it was a slow pour. Let me loosen it up.
...one minute later...
Barista 1: Better. But a little sour. Did you futz with the temperature?
Barista 2: Me? No, I checked it this morning.
Barista 1: Well, it's still a little sour. I wasn't looking closely, did you dose the same amount? That pour looked too fast to me.
Barista 2: Hey, I dosed like always. You want to show me how it's done smart guy?

All baristas, if pressed, will admit that sometimes they are guessing what went wrong with an extraction. So following the adage, "wise baristas learn from their mistakes," this section will focus on intentionally bad extractions. Please pause for a moment to reflect on the many wonderful beans that were sacrificed to bring you this learning experience.

Our study begins with one of the more common extraction flaws, as shown in the image to the left. To readily produce this shot, I increased the brew pressure to 10 bar and intentionally canted the tamp with one side of the puck visibly higher than the other by about three millimeters. The tiger-striping is gorgeous on the left-hand side and the beautiful coloring held there until the end, but trouble began very early on the right-hand side. The photo was taken approximately seventeen seconds into the pull.

The channeling on the right side is likely due to broken adhesion between the walls of the basket and the puck. In addition to canting, hard or excessive tapping to knock grinds off the side of the basket during tamping can cause this type of channeling. It is more difficult to detect this kind of channeling than catastrophic failures since the stream would look passable if viewed from a normal pour spout. Without the bottomless portafilter, the scant evidence of a problem would be a thin blond thread in an otherwise medium to dark stream. You may also see twirling "barber pole" striping in such pours. The shot itself was drinkable by average cafe standards; it did however suffer from lower body and reduced sweetness.

The next example is regrettably the most common mistake you'll encounter in commercial establishments: The infamous fifteen second espresso.

To produce this blond gusher, I reduced the pressure to 8.5 bar and moved the grinder adjustment two clicks coarser. The tamp was not intentionally flawed and you can see that overall the extraction is even. The photo was taken at approximately twelve seconds into the pour. The cone has already formed and is growing at this stage; a correct pour would still require several more seconds until the cone reached this size. In addition to a grind setting that is too coarse, extremely high temperatures will accelerate blonding, as will happen if the barista forgets to perform a cooling flush before the extraction.

High speed pours are invariably thin-bodied, sour, and weak. If you're served a shot like this at a cafe, you may be tempted to blame low temperature for the sourness, but quick pulls are more often the real cause. It's very difficult to distinguish a low brew temperature espresso from a blond gusher by taste alone.

(A Brief Intermission for the Test of Thirds)

A good way to roughly categorize the effects an extraction fault introduces is to do a proper extraction divided into three parts, what I call the "test of thirds." Improper extractions exhibit a stronger tendency in one of these three parts, which throws the rest of the shot's qualities out of balance. Therefore recognizing the taste characteristics of a divided espresso will give you important clues about the stage in which the extraction went astray.

The first third of a pour is the most pungent and gives the espresso its "punch" in the same way that the higher percentage of cocoa defines the character of dark chocolate. Depending on the initial starting temperature, the first third can also tend towards sour flavors. The second third of an espresso pour is the crowd pleaser. In fact, some baristas intentionally let the first few seconds of the pour fall into the driptray to emphasize the sweet and creamy nature of the second third, but in doing so you'll potentially sacrifice the character that makes the blend interesting. The last third is weaker, lacks body and sweetness, and in some blends tends towards bitter flavors as more caffeine is extracted. Some baristas are tempted to end the pour well before the last third is complete and before the onset of blonding, but skilled professionals often let it flow longer than newcomers, knowing that the last portion can add a pleasing complexity to the shot. 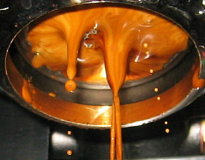 Returning to the tour, please direct your attention to the disastrously bad extraction shown on the left. To produce this nightmarish pour, I returned the grind to the same setting as the first in the series, but intentionally distributed the grounds unevenly, tapped the portafilter against the countertop, and tamped with scant attention to proper level. In the hopes of producing a really good jet stream, I also raised the brew pressure to 11 bar. My reward is the wonderful "dot dot dot" captured in the photo as a fine mist sprayed out from a pinhole in the bottom of the puck.

If you look carefully near the right edge of the photo, you'll see side channeling that establishes a new low point in extraction mishaps. The leak spewed out with such force that the channeling stream overran onto the side of the portafilter and missed the cup completely. I was surprised the camera lens didn't get sprayed! The front of the espresso machine and parts of driptray were covered with teeny droplets of coffee. Perhaps safety glasses are wise for the first few uses of a bottomless portafilter?

One bit of common advice offered to those reporting poor shots is to reduce the brew pressure. But based on the bottomless portafilter extraction analysis, I suspect in many cases those blaming excessive extraction pressure for lackluster shots are actually seeing the consequences of increased channeling due to the higher pressure. That is, the prevailing advice offered to inexperienced baristas to improve shot quality by lowering brew pressure may be more about reduced channeling than a genuine comparison of a proper extraction at a lower versus higher pressure.

One drawback of the bottomless portafilter is it can provide too much information. The image to the right is an example of analysis taken a step too far. Highlighted is a "dead spot" where no coffee is coming out and a light reflection that tarnished the appearance of an otherwise beautiful extraction, but the taste was as good as the double shown at the beginning of this article. Focusing too much on the process can blind you to the goal—enjoying better espresso!

The bottomless portafilter is a handy diagnostic aid, especially for espresso machines that demand careful attention to technique. But there are limitations to what it reveals since not all channeling is visible from the bottom of the basket. Intuitively one might think of channeling as a "hole" that runs vertically through the puck, but uneven water pathways aren't always straight conduits from top to bottom. Fissures can be transversal between layers in the puck; you can produce impressive horizontal channeling by hard packing a half-dosed portafilter, dosing the remainder, and then lightly tamping. The upper layer of coffee will be less extracted than the lower layer below. Visible evidence of what is occurring will be absent from the vantage point a bottomless portafilter offers — the giveaway is extraction coloring that begins dark, the tiger-striping ends early, and boom! A sudden uniform blonding about fifteen seconds into the pour.

Now allow me to introduce professional barista Chris Tacy as "guest author" to close out this how-to with his perspective on what really matters to the pros.