Read about current and future offerings from the site sponsors.
← Back to Marketplace •

We have worked with Lelit over the past 15 years, and about 5 years ago, Lelit took a significant change in direction to improve their basic espresso machines to the forefront in the home espresso machine industry. Although we still have customers today inquiring for a part here or there for their 10+ year old machines, Leit has improved their quality, reliability and technology.

Over the last 24 months, 1st-line provided a lot of concepts and feedback when inquiried by Lelit for their double boiler machine. About 3 months ago, we received our first prototype for testing not just by us, but also at specific trade and consumer exhibitions and shows. We already provided feedback to improve the prototype from our testing as well as the feedback of consumers and the good folks in the coffee trade to produce this game changer home espresso machine: The Lelit Bianca PL62T Espresso Machine! 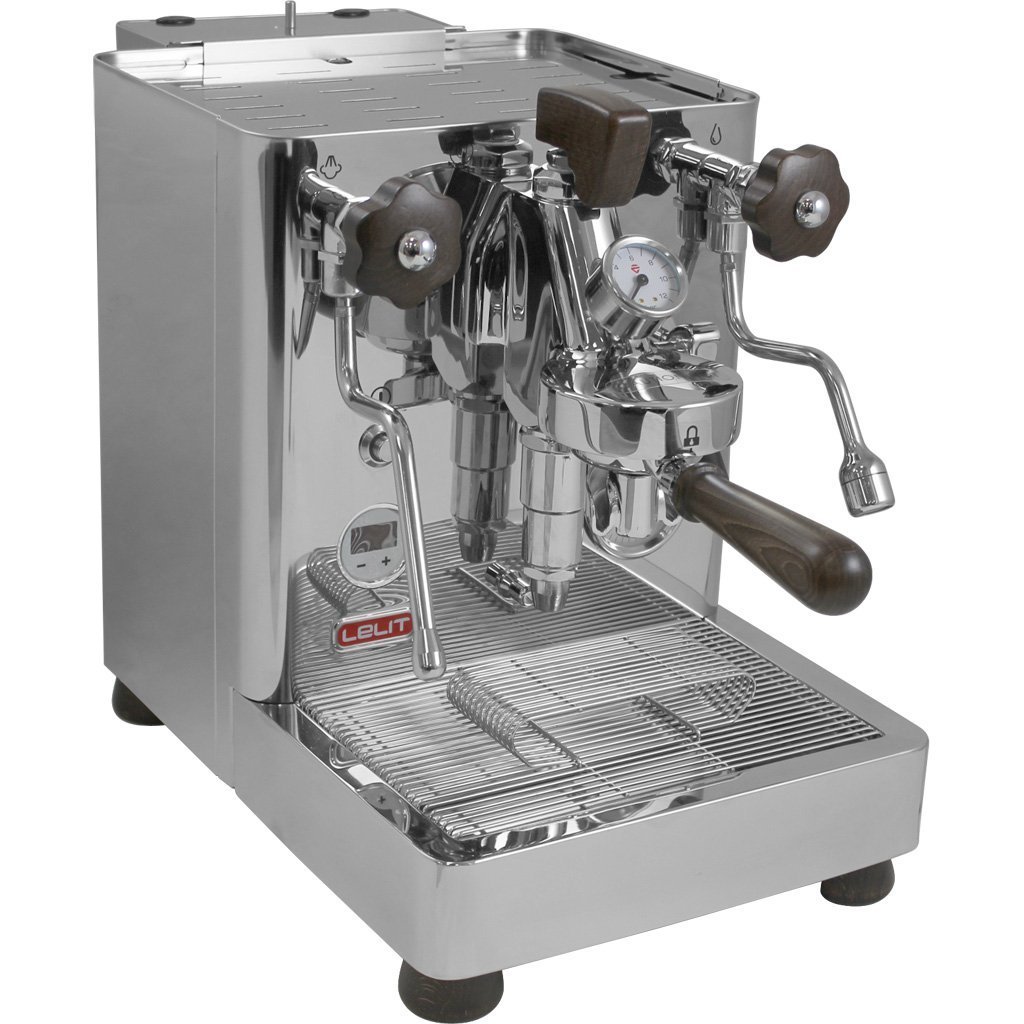 The Leit Bianca PL62T is a PID double boiler machine with both boilers made of stainless steel, has a water tank can be changed from the back to either side for spacial requirements or for easy refilling (righties and lefties are equally important), programmable active pre-infusion with programmable soak time, switchable to direct plumbing and draining, and the most striking feature is the manual brew pressure profiling on top of the E61 grouphead.

The home barista has control of the brew pressure profiling throughout the espresso extraction with the timer on the PID display counting. Using this machine for the past 2 months, I have been just floored by not only the crema production and flavor profiles created, I really never have seen an espresso crema produced with such mouthfeel! At our last event, we even had a visitor who is employed as a taste tester by a well known coffee giant's NY Reserve store and was impressed with the flavor profiles produced by the Lelit Bianca!

You can review a quick first impression video of the prototype on our YouTube channel. We are taking pre-orders on our web site for September delivery at a special discounted price.
Jim Piccinich
www.1st-line.com
1st-line Equipment, LLC
Top

Certainly looks most interesting with further innovation for the DB E61 platform.
"You didn't buy an Espresso Machine - You bought a Chemistry Set!"
Top

Yet another innovation. It immediately brings to mind some questions. First, I understand what the additional lever does; but I'd like to know why one would need or want it. Second, and this presupposes some truly useful purpose for this new frill, the e-61 appears to be a standard one with the added lever; so how hard would it be to add this function to existing e-61s? Curious minds want to know...well, one at least

On the first note, the manual control over the brew pressure profile is to allow the home barista experiment and formulate a superior shot in the cup. On the second note, we would not be able to answer this question as we have not investigated of any internal redesign of the E61 group. We only have the prototype, so any answer may not be as accurate as we like.
Jim Piccinich
www.1st-line.com
1st-line Equipment, LLC
Top

I got answers to some of these questions from Lelit (through Jim at 1st Line). I believe this information refers to the final production model, which they're going to start building next month.

-The e-61 head is custom. The mechanical preinfusion feature has been disabled, so it doesn't interfere with the electronically programable, pump-driven preinfusion.

-The pump is a rotary pump, not a gear pump. Lelit says the preinfusion programming allows you to program how long the pump is on, and then the time the pump pauses before final infusion starts. I've read speculation (not confirmed by Lelit) that during preinfusion, the pump pulses, to keep the average flow rate lower than normal.

-This programable preinfusion can be turned off entirely. You have the option of using no preinfusion, or doing it manually with the paddle, Slayer-style.

-The paddle operates a needle valve, and gives continuous flow-control from full blast to zero. Technically speaking, as discussed in this thread My long and rambling path to preinfusion/pressure profiling, the machine is flow-profiling rather than pressure-profiling. After the brew head is pressurized, the difference is somewhat academic, but during preinfusion the difference is significant. The flow-profiling approach should allow a very long, slow preinfusion and a corresponding extra-fine grind, to accommodate light-roasted single-origin beans.

-Most of Lelit's videos show the paddle being used to taper the flow at the end of shot, possibly to mimic a spring lever machine.

-Boilers are stainless and pipes are copper. Lelit's literature says the steam boiler is 1.5L, the brew boiler 800ml, each with a 1400W heating element. Possibly the 120 volt version will draw less juice. In either voltage, the electronics would have to keep both boilers from firing on full at the same time.

-Other features ... shot clock, steam boiler shutoff, programable "standby times" [is this wake/sleep?], PID settings for brew and steam, total and partial dose counters [no idea what this is].


I'm inhaling information about this machine because it's almost exactly what I've been looking for. The design principles of the Slayer appeal to me, but the price doesn't. And it's seemed all along that the Slayer's defining feature (manually controlled slow preinfusion) is separate from what makes it expensive (handmade, high-end, boutique everything). So I was hoping someone would catch on and make a machine for commoners with a similar super power.
Top

Hi guys, I'm completely new to this forum and I just found this. I was about to order an ECM Synchronika and S-Automatik 64 grinder package from whole latte love... I had almost pulled the trigger on a rocket machine while I was at the SCA convention in Seattle, then found a four-way comparison that had the machine I was looking at against the ECM and to others... I had never heard of ECM but I had some features over the rocket for a pretty close price... now I found this and it looks like it has some of the features of the one group slayer... I am the furthest thing from an experience coffee maker, I love espresso-based coffee and want a good machine to use for many many years at home... Would you recommend this over the ECM? Would you recommend a different machine?
Top

-The paddle operates a needle valve, and gives continuous flow-control from full blast to zero.

Hmmm...pardon my ignorance (never had a chance to play with a Slayer), but isn't this significantly different from a Slayer? If I understand correctly, the paddle on the Slayer is simply a 3-position off/pre/on switch (in essence, they moved the usual e-61 lever to the top, out of the way, where it should have been in the first place

), while this new machine is continuously variable? So, it has the look of a Slayer but much more manual functionality? Like the Slayer, this machine also has electronically settable preinfusion, which is a separate feature. Not trying to start a fight by 'dissing' the Slayer...just trying to understand what we've got here

Sure, it's significantly different. But you could think of it as having an expanded version of Slayer's main feature, so it should let you do the basic Slayer-style extraction (in addition to other things).

I don't imagine that one approach is necessarily superior to the other. This one offers more variability to play with; the Slayer should offer better shot-to-shot consistency.

Slayer's programable preinfusion uses the same needle valve as the manual method. Bianca's uses what looks like a hack of the rotary pump controller. We'll have to see how well that works in practice.

On the Bianca I'd love to able to adjust the minimum flow rate through the needle valve. Lelit says it will be zero in the stock machine—meaning that when the paddle is all the way to the left, there's no flow. I wonder if that could be modified and adjusted, so the far left position would give you 1ml to 2ml per second. Then you'd have a very simple, repeatable position for doing a slow preinfusion (like on Slayer). This seems better to me than trying to remember an approximate position from shot to shot.
Top

This looks like a big deal The Hydra, Slayer and LM variable pressure machines are hand built commercial machines costing about three times as much; the Decent is a hobbyist machine with all the attendant uncertainties and TLC requirements. Lelit is a mainline home machine manufacturer.

I'm not quite enamored by the look of the brew control paddle (it may look better in person than on the pics); but to see one on a home machine at this price point is pretty amazing. Jim has scored the coup; but after it starts selling out, you'll probably be seeing competing versions from WLL and Chris as well.
Jim Schulman
Top
← Back •
By accessing this site, you agree to the site's terms of service.