I wanted to share my little project I've been working on the last couple weeks.

While I very much love my Robot, I came to understand that its capabilities far exceed mine. That is, paired with my (I'd say very proper) grinder, it is capable of producing superb shots and consistently so, if I were up to the task. While I do my bit of RDT, a furious WDT, an almost level tamp, and try to get my pressure profile juuust right, I still miss the mark when it comes to ending the shot.

With bottomless, I can kind of tell when I need to stop based on color and volume, and my consistency improved over time, but it's still me who is adding the inconsistent parts.

That's why I'm using a scale, and with that my Robot and I got very consistent, but there's a problem which others have also experienced: My scale doesn't fit under the Robot straight, and when I tilt it a bit so that it fits, I can't fit two cups. With certain cups and the spouts, the added height of the scale would be a problem. Another problem is that with the spouts, I can't see the color as well anymore, and mentally adding the volume from two differently sized cups is not something my human brain can do. I could do a bottomless shot every time and split it afterwards, but where's the fun in that?

So I built an extension for the Robot which replaces the base plate, and is a scale.

It's made from cast acrylic sheets and the so called M5Stack (which is an ESP32 with a nice display and a few other niceties such as a charging controller and most importantly a reasonably good looking case). It also contains a ridiculously oversized LiPo battery which supplies enough juice for the scale to run >100h, but that's what I had on hand.

I'm still having a bit of trouble with accuracy of the scale (thank god nothing mechanical, "just" some small electrical issues which can certainly be resolved) which means that accuracy is about 1g, but the mechanical part is done and pulling a shot works very well. The software is in very rough shape as I'm still experimenting, but so far I've found some well working filtering techniques and was able to integrate a shot-timer. I'm planning on adding a pre-infusion timer as well, but have not come around to it just yet.

(The 20kg load cell in the pictures is not what I'm using, which is a 1kg load cell. I've just used it as an expendable construction aid.)

Paul, if you are reading this: Thank you so much for using standard components and screws instead of glue and other sh** that's not meant to be taken apart. I hope such modifications are not against the TOS of the Robot! 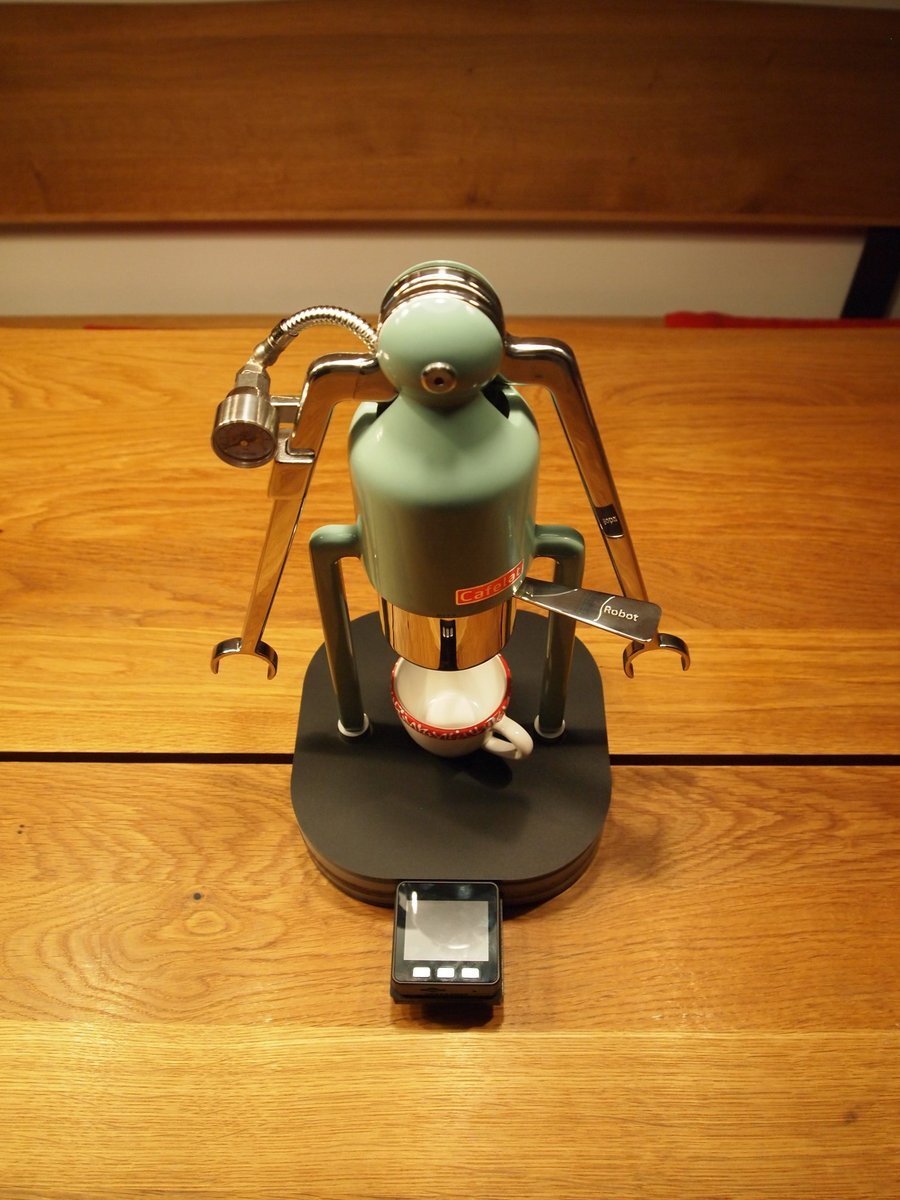 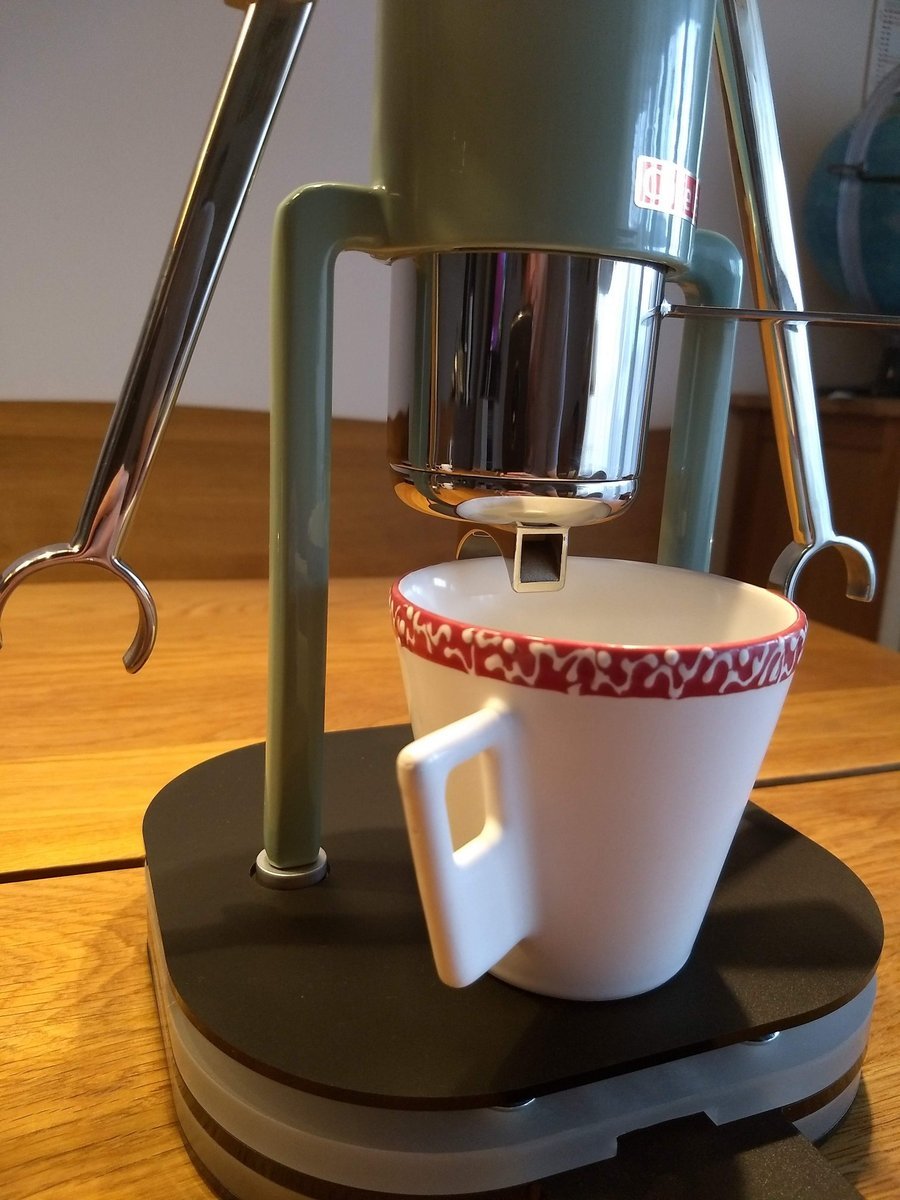 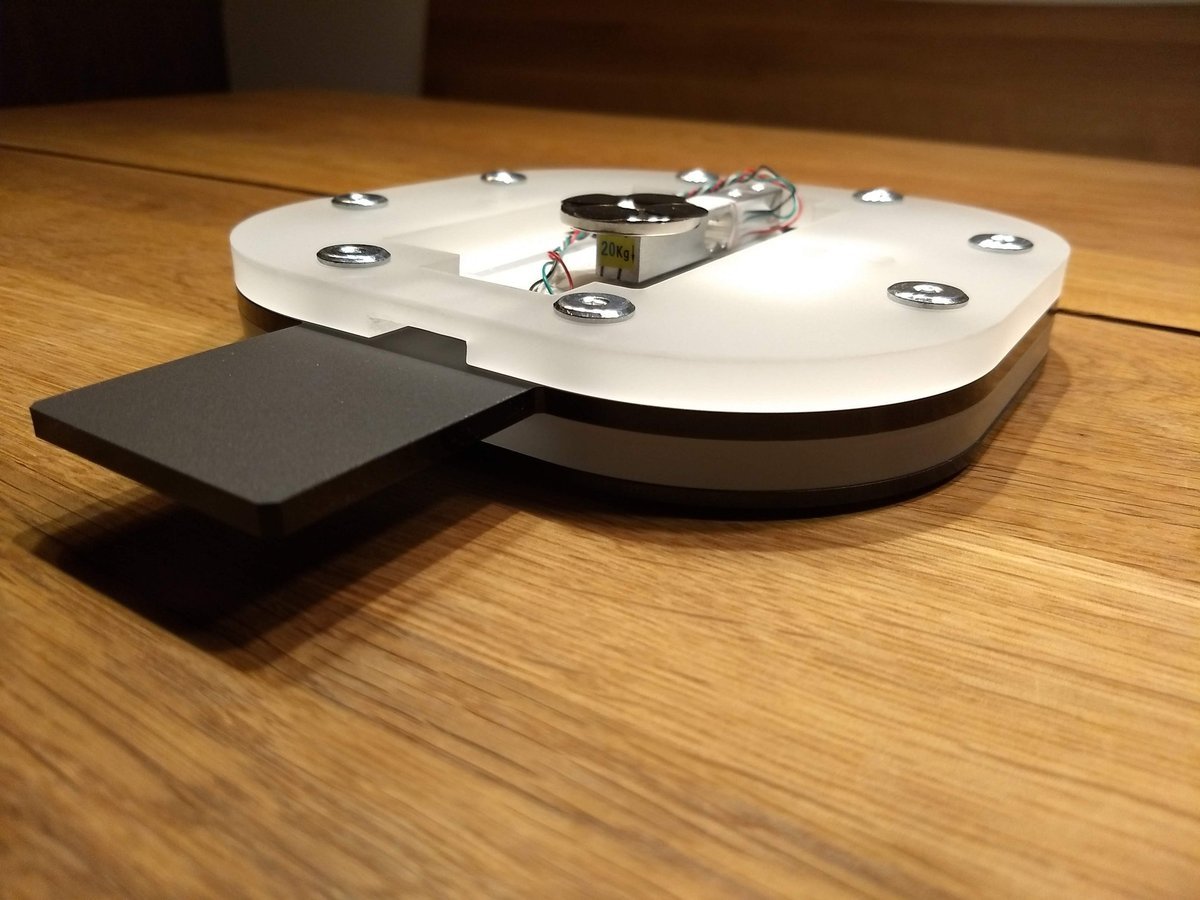 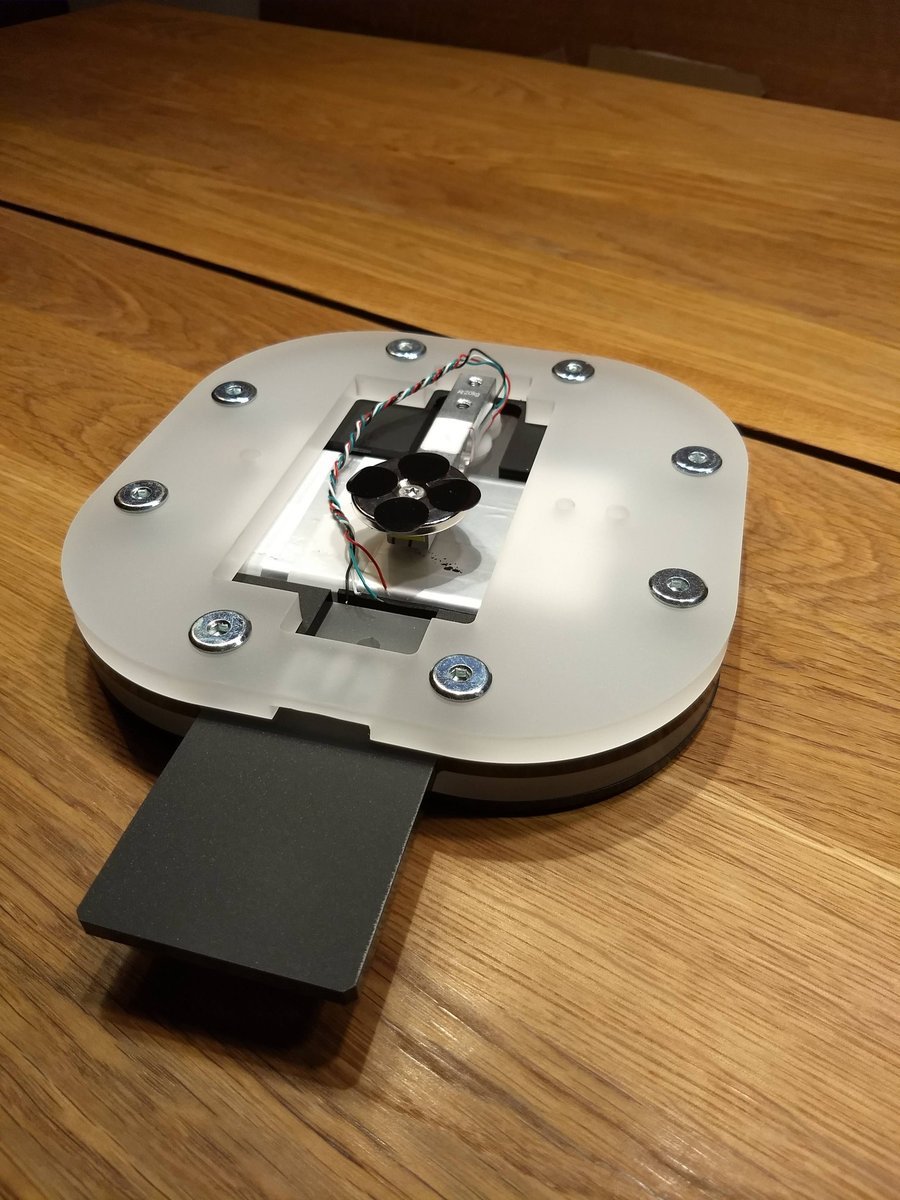 Yeah, super nice. I do think the baseplate is a great opportunity for adding capability.
Top

And enter the new Pyxis from Acaia. https://acaia.co
No Espresso = Depresso
Top

There are other scales that fit the Robot. The one I use is equivalent in size, range, and precision to the Pyxis. It works great.

But a built-in scale has a lot of appeal. If you could get the precision down to 0.1g you could weigh your coffee beans on the Robot base, eliminating the need for another scale. I'd personally like that. I presume it also has a weight-sensitive timer -- that's one thing my less-than-$20 scale is lacking.

I'd love to see more of the details about the parts and the construction. Would you be willing to share that?
Top


Could you share what that scale is? Is it as quick as the other Acaia Scales?
LMWDP #643
Top

Damn, the Pyxis looks like a very fine scale, although I'm not sure it would fit two cups as this thing looks tiny.

For $250 which is a bit more than I spent for the whole build (and these acrylic cuts are _expensive_ in such small quantities), it should be very good and will of course blow my scale out of the water.

My scale is nowhere near the claimed 0.01g accuracy of the Pyxis, I'm at 0.05g (long term drift is a bit more, but that can be fixed in software easily) now that I've fixed some electrical issues. That's plenty for me, I'd be fine with less than that, but it might be too inprecise for most. Problem is, as soon as you need that kind of precision, you've got to get your act together and fight the electrical noise on all levels. That means custom circuit board, probably separate amplifier and ADC, super short, shielded wiring yada yada yada. Not something I would want to do in my spare time

But the most important part was that it was a lot of fun to design and build, to tinker with the Robot and find a way how it can be extended. Granted, my build is very simple and obvious in that regard, but still. Now that the Robot production is in full steam, I'm looking forward to see other mods (the scuba was very nice yet I hope there is more to come!).
Top

jevenator wrote: Could you share what that scale is? Is it as quick as the other Acaia Scales?


It's the AWS SM-501. Searching just now it appears it's no longer available. I wonder when that happened. I should have bought a second one just in case mine (which is over 7 years old) ever breaks. At some point the buttons will probably start to go. Oh well, I'll bet there are others that are comparable.

I couldn't find a specification for the Pyxis response time and also couldn't find a video showing it in action. I've never used one of the 0.1g resolution Acaia scales but videos make them look pretty quick. The response time of the AWS scale is on the order of one second.
Top
← Back •
By accessing this site, you agree to the site's terms of service. If you need help with the site, please contact us.