The Zassenhaus is great, You will adjust the grind alot but this is something you get used to. I enjoy the manual aspect to it, No noise. And when I have a friend over they have to work for their coffee. It takes around 1 to two minutes to grind enough for a shot. Great to feel the way the coffee is being ground as you turn the handle.

I also just ordered the Isomac Gran Maccinino, that grinds directly into the portafilter. It was a great deal for the Home Barista anniversary from Chris coffee. It is for my studio when I have to make a number of coffees for my students and myself. The Zassenhaus is great and beautiful but you may get frustrated when you have to make more than one or two shots.
Mitchell
LMWDP #77
Top

Perhaps I will seek one out, then. I like the ritual of the whole process, so a hand grinder seems like a great addition to my set-up. I barely ever make more than a couple of shots, so it should be perfect.
Top

GG - I use a Zass 175M (the brass Turkish mill) every day for my Europiccola. 2-3 shots a day. It takes 110 turns to grind up a whole chamber of beans. The grounds holder (the bottom) then slides off and fits right into the filter basket. I do it over a small bowl and it makes very little mess. This process makes slightly more ground coffee than the LaPa filter needs but the little waste is small price for a very simple proceedure.

FYI - prior to than I used a Zass 171KD (Wall mounted, very nice). It also did a great job but the impeller went loose so its on its way back to Germany for repairs right now. High end powerful grinders are great but the quality, price and quiet of the Zass is how I chose to go (and I'm happy with the choice).

GG, welcome to the forum.

I've been using hand grinders for years. They're probably slightly less consistent than a very good electric grinder, but they work fine. I place two scoops of whole beans in the top, and around 50 handle-turns later I have enough finely-ground coffee pull a lovely doppio. It can grind fine enough to jam a lever, or for that matter, a pump machine. I love the grinding ritual. I dose by covering the wooden drawer with a card with the corner cut off, which allows me to fill the portafilter without any spillage. No mess, no noise, and tasty espresso. If you get one be sure that it has forged burrs and is in very good condition, or it may not grind fine enough for espresso. Cheers, 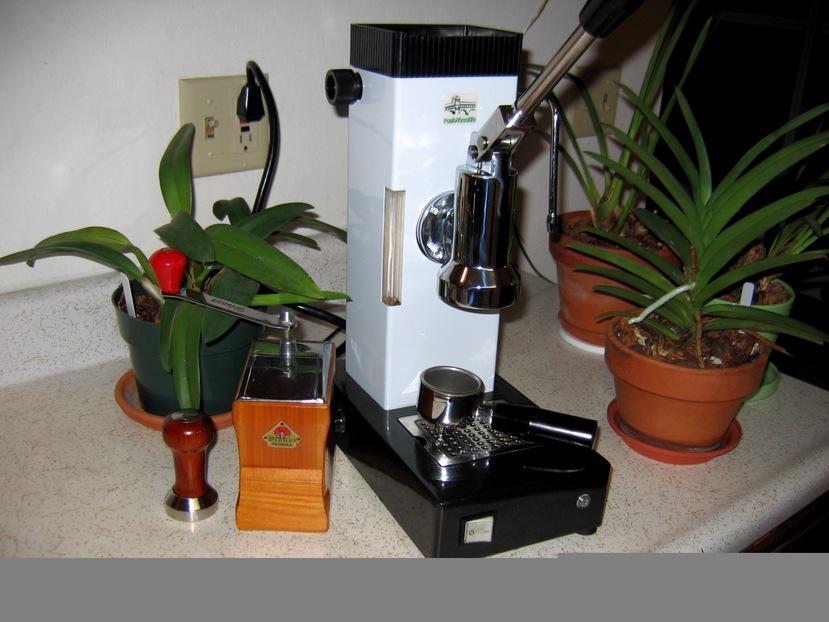 Hand-ground, in the cup: 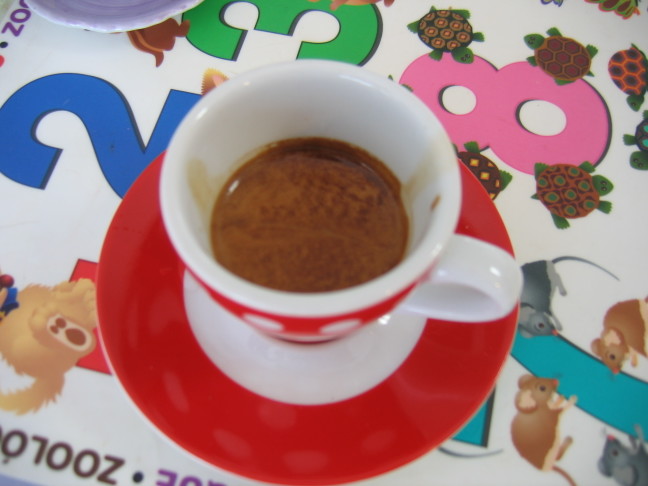 Oh pshaw, I enjoy regular servings. As we discussed offline, the SCAA conference / USBC / EspressoFest was my heaping helping.

I have been very interested to read Dan and Jim's analysis of what is and isn't desirable in a competition shot. Where can one learn more, and how are the standards set? Also, how closely tied do you think these characteristics are to exemplary flavor?

The score sheets and other rules are downloadable from the SCAA:
http://www.scaa.org/about_usbc.asp. Shots are rated 0 to 6; with 0 being bad, 1 poor, 2 average, 3 good, 4 excellent, 5 godshot, and 6 a posthumous award by a judge dying of ecstasy.

I like my coffees acidic, my roasts very light, and my shots rather hot and ristretttoish, around 205F, with a shot start that drips and gets gushy towards the end. Consequently, I get crema that's darker on the outside than the center. Better looking crema for me means a much less tasty shot (although I was kind of surprised how poorly my crema rates). This type of idiosyncrasy wouldn't fly in Barista competition (not even personal baskets are allowed - I for instance prefer Faemas to LMs for this sort of blend and shot). Instead one has to make do with the baskets and machines provided, and one must grind and dose them for a very even flow beginning to end to get a uniform crema (and to satisfy the technical judge who would be handing out 1s for the way my espresso flows). The blend needs to be chosen to taste spectacular subject to these constraints.

I'm no longer as certain as I used to be that my technical eccentricities produce tastier shots -- I had some very excellent and ego-deflating ones at Charlotte. However, I'm still not enamored with this USBC and WBC "technique strait jacket;" I think it retards pushing the envelope by the very people most qualified to do so and most likely to produce really stunning improvements in fundamental technique. Figure skating started with skating figures -- i.e. perfect circles, figure 8s, etc. Then they added the free competition, where people could (gasp) jump. Finally they abolished the figures in figure skating. I somehow think that skaters today are somewhat more proficient than they were in 1920. It's a lesson the barista championships need to learn.
Jim Schulman
Top

another_jim wrote:I like my coffees acidic, my roasts very light, and my shots rather hot and ristretttoish, around 205F, with a shot start that drips and gets gushy towards the end.

I have been reading Jim Schulman for years. Almost all the time I am completely frustrated with his views. This quote is wonderful. It say it all and so perfectly.

I, on the other hand, hate acidic coffees. See my constant whining about Kona espresso's and earlier Brazil's. I like my roasts on the dark side but I am backing off the darker ones. This week I think I over-roasted two Yemeni just slightly. I much prefer less than hot shots. I actually agree with Jim on the drip to gushy shots.

My point is: figure out what you like. I have no doubt that Jim likes the shots he describes. I can taste his and have no interest in tasting any ever. Au contraire, I understand that he would throw mine down the sink.

Ths is an essential insight for all of us.

Thanks Jim for the lesson.

ian2kris wrote:Also, how closely tied do you think these characteristics are to exemplary flavor?

Taste is what matters, though appearance is often an accurate leading indicator. To put it in terms of barista competitions, refer to the sensory judge's score sheet:

Taste Evaluation of Espresso: The taste and tactile balance are weighted x4. The color assessments we've been discussing accounts for 6 points out of 60 (note: crema recovery can be tested by a "spoon drag" through the crema as part of the consistency / persistence score). Plenty of espressos look gorgeous but disappoint in taste; though generally speaking, the first two scores (color, consistency) together usually correlate with the latter two (taste, tactile balance).
Dan Kehn
Top

That's awesome Dan, but can anyone quantitatively lay out, what percentage of those scores are the coffee and what percentage are the skills of the barista??? I've had some coffees (the one I'm drinking right now) I can't seem to screw up. I've had others I have to work very hard to get anything I want to drink. So I know it isn't ALL skill of the barista.... Whadda ya think?

Ken
LMWDP #054
Top
← Back •
By accessing this site, you agree to the site's terms of service. If you need help with the site, please contact us .