Based on homeburrero's calculations in Pulling force for La Pavoni Europiccola I created a few simple graphs to use as reference for "profiling" your shots on the Europiccola or Professionale.

For convenience on all continents I produced the graph both in kilograms as well as pounds. 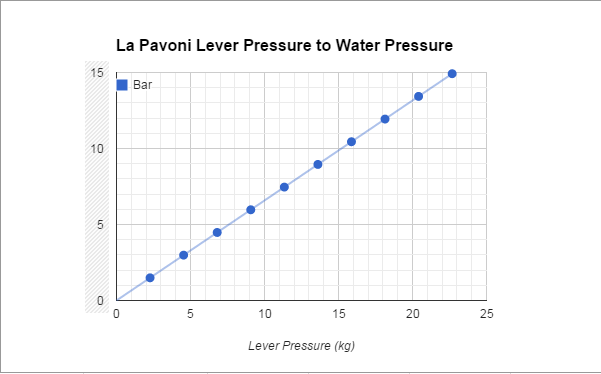 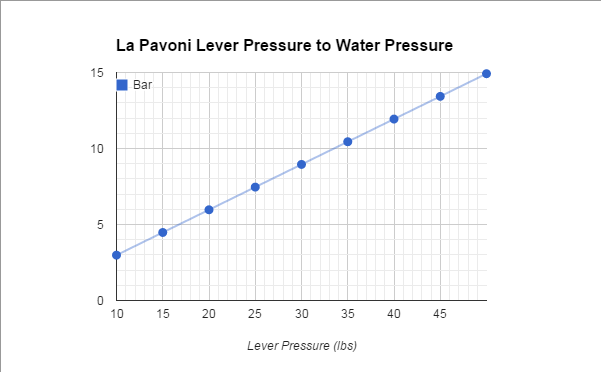 I have been playing with these pressures myself on my "Bathroom Scale Mod" and "pressure profiling" with the combination of the bathroom scale and my timer / group thermometer. 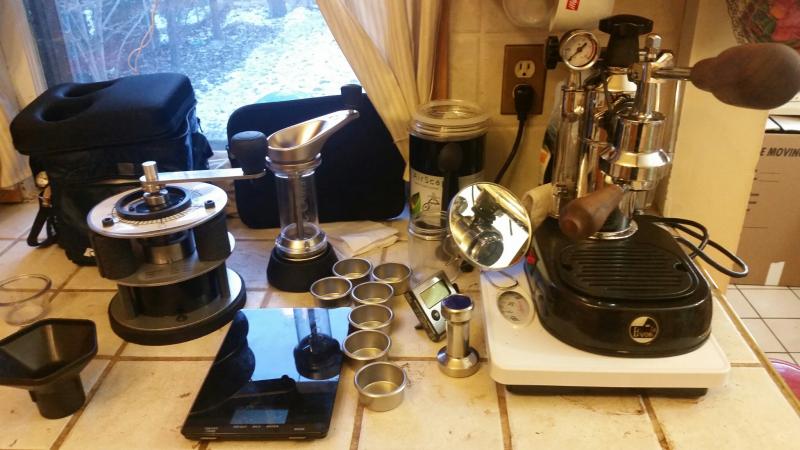 I find my favorite taste results with grinding 16 g into an Elektra basket at grind of 145 degrees from 0 on my Pharos, or 11.5 "clicks" on the Lido2.
When the group temp reads 190F I preinfuse at .9bar boiler pressure for 5 seconds, then another 3 seconds of about 20 lbs lever pull (6bar according to graphs above). I then do the full pull at about 32 lbs to get the "mousetail" which coincidentally is right around 9bar. I then concentrate on keeping the flow steady, which means slowly and consistently backing off on the lever until the flow blonds (or the lever stops) which usually winds up ending up at a bit less than 25 lbs (7 bar) at the end. The whole process usually takes between 30 to 35 seconds (longer if I tamped a little too hard, in which case my ramp up may approach 40lbs in order to "save" the choked shot).
I usually end up with around 35-40ml of espresso at the end and respectable crema. Good mouthfeel, clarity, and nary a hint of bitterness

Using an "Espresso Dolce" blend roasted a week or so ago by a local roaster I did a series of back to back trials one caffeinated Sunday afternoon; 7 of them, because I own 7 Elektra double baskets.
It was fun to test both the consistency of my lever technique as well as my ability to control the group temp across multiple shots. I was very pleased to get 7 like-tasting shots, all of them pleasant!

I turned the Pavoni off between shots, turned it back on right before the shot to get the boiler temperature back up, and cooled the group to the desired temperature immediately before the shot using the "water filled ramekin" method.
Note that I am using the '98 pre-mil Pavoni with a PStat.
2 switch Pavoni Pilots will have to modify their technique a bit.

It is interesting to note that if you use the ramekin water draw method of cooling the group right before a shot then you don't need to do any cleaning flushes between shots, as this serves to both rinse AND cool the group, therefore I was able to get through all 7 shots on one boiler fill.
http://bit.ly/29dgjDW
Il caffè è un piacere, se non è buono che piacere è?
Top

On the more relevant issue, I have read that spring levers are generally considered more consistent and superior because of that consistency. Have you worked on making changes to your ratio to nail the 15Bar generally sought?
Yes, i you per this on an iPhone
Top

I think this guy wins the "clever alternative uses for the Aeropress funnel" award: Post a pic of your home espresso setup...

Springs are definitely more consistent and convenient. They automatically have a desirable , slowly declining pressure profile by nature, one that I try to emulate with my full manual lever. However, besides the sheer "zen" joy of feeling every drop of the coffee pour through the puck under your complete manual control, adjusting on the fly according to pour, the full manual lever does offer the most flexibility for those who are willing to wrestle with the machine for a few months until they learn to dominate it. I have a "super ristretto" mode where I grind a few degrees tighter on the Pharos and dose to 18g. I do a standard tamp of 30lb (over the super light "barely squish the air out of the cake" tamp I normally do for the Pavoni) and preinfuse at boiler pressure for 10 seconds before bearing down on the lever, harder where I need to put 45+ lbs of pressure constantly on the handle in order to even get the slowest drips of coffee. It can take over a minute and a half at times with those chokers to get a shot volume, but I am usually rewarded with something sweet and very heavy bodied, as long as the coffee used is tolerant to that type of pull and I turn off the machine during the shot as not to allow the group temperature to continue to climb.

Although I love my Pavoni's I am waffling between picking up a Ponte Vecchio Lusso a 2 Gruppi or a Bezzera Strega to allow me both types of lever experiences.

The RSVP tamper, didn't you know that was standard fare among Pavoni users?

They are cheap, metal, and better than the plastic or nothing at all that usually comes with these vintage machines. I'll gladly accept donations of a better tamper though if you think it'll make my espresso even better!
http://bit.ly/29dgjDW
Il caffè è un piacere, se non è buono che piacere è?
Top

day wrote:On the more relevant issue, I have read that spring levers are generally considered more consistent and superior because of that consistency....

I wouldn't say 'superior;' rather, I'd say different.
What I'm interested in is my worst espresso being fantastic - James Hoffmann
Top

Please be aware that the leverage of 10 : 1 only applies with the lever at right angles of the piston rod

Especially at the beginning of the travel, with the lever high, the angle seriously reduces the vertical vector, meaning that you need the equivalent in extra force.

This is why you can feel the lever moving more smoothly through the butter as it travels down.

The solution is nót to apply gorilla force at the beginning of the stroke but maintaining a third or so more force and allow the water time to filter through, gradually deminishing the pull on the handle till it at 90 degrees matches with the optimum leverage.

The pressure on the puck will thus build up, stay constant and then tail off again. Just like in the graph Pavoni provides:

They are cheap, metal, and better than the plastic or nothing at all that usually comes with these vintage machines. I'll gladly accept donations of a better tamper though if you think it'll make my espresso even better!

I got a tamper made for my La Pavoni on Etsy -- pretty inexpensive ($21-$26, depending on wood). Simply tell him the size you want (i.e. 48.6 mm, for example). The base is aluminum and flat, but much better than the RSVP, which I had.
Chris
Top

Huertecilla wrote:Please be aware that the leverage of 10 : 1 only applies with the lever at right angles of the piston rod

You are right that the the down-force on the piston (which is the thing directly related to pressure) does change with the lever angle, and is optimum (relative to torque on the lever) when the lever is at right angles to the piston rod, as you say. And it gets even more interesting than that, because in practice, the force that one applies to the lever is directed towards the base of the machine (to keep it from tipping), and that would contribute a bit more to a lowering of pressure (relative to hand force) as the lever comes down.

But if you are using a bathroom scale you are roughly measuring the straight-down force, so those subtle vector effects tend to resolve out. Not that it really makes much difference if what you are looking for is a way to train your arm to know how hard a too-hard pull is.

If you smoothly ramp your force to your less-than-gorilla to get the first drops, then ease off the force as necessary to keep the flow looking right (a bottomless and a shaving mirror helps with this) all the way through to the end of the pull I think you will naturally control your pressure profile.
Pat
nínádiishʼnahgo gohwééh náshdlį́į́h
Top

Yes, the scale thing is very useful to see how much effort results in how much force.

My point was that the graph the OP provides in the opening post only applies at right angles. The hand force -> pressure looks like a shallow parabole graph with the diagonal as base line.

Familiarity with the force vs pressure and feel of how much effort that is using the scales helps us with consistency.

The leverage and angle are a given so if we try to achieve a consistent pressure and time, the variable is the resistence to flow by the coffee. As such the resultant of grind x fill x tamp regulates the squeeze.
Top

Huertecilla wrote: My point was that the graph the OP provides in the opening post only applies at right angles.

So I could post many more graphs showing the piston pressure at various pulling forces for various lever angles, but I believe the ones in the original post are sufficient to approximate whatever pressure profile you are looking for.

To account for the lever angle, I used the following formula: