I finally had the time to drill & tap a grouphead pressure gauge to my ol'faithful Pavoni(and with a 1mm drilling error ol'faithful would be lying in the garbage bin now). 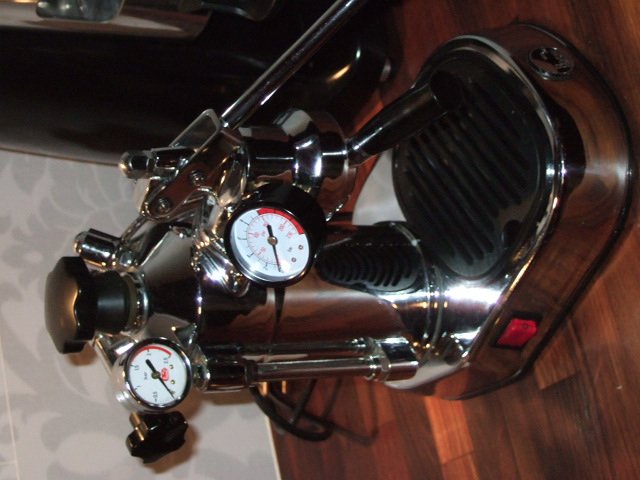 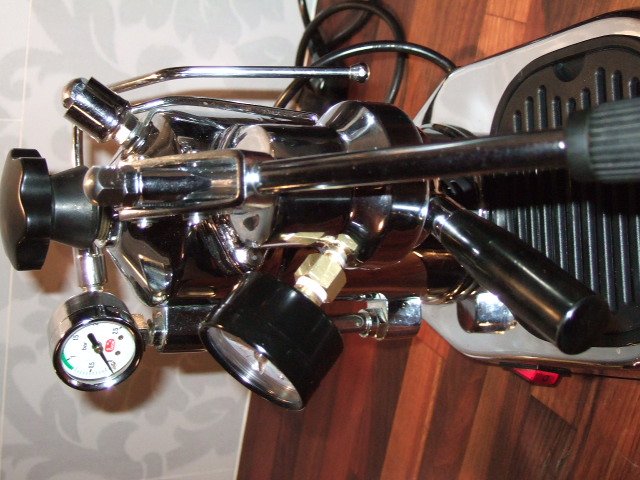 I immediately noticed something interesting, when i had my bathroom scale under it(which i used before i made the gauge) while making shots and keeping a constant 9bar on the gauge the scale jumped from 48.5lbs(22kg)(beginning of the pull) very quickly to 59.5lbs(27kg) to almost 66lbs(30kgs) at the end of the shot?
Its not because the handle is at a different angle, it is almost 90deg. through the entire pull(and i make ristrettos so it stops vertical too)

So my previous cups were completely off when i was trying to keep a constant "pressure" of roughly 44lbs(20kg)!, which was mainly the reason i moved the Pavoni aside and switched to my other machines for awhile cuz i didnt get the shot quality i wanted.

I have 3 commercial HX's and have been using those for a time now, a 1 group(1965) original Faema E61(and a 2 group(1967) E61 as well) and an Elektra A3, (i am not trying to brag, Italy is quite close to where i live(compared to the States) and the old Faemas(as well as other machines) are still dirt cheap there)

But now!, the shots are so good on the Pavoni that is the only one i use again!, could there really be some magic to the lever...?
The crema is thicker, darker, tastier than on any other HX or double boiler i have tasted, why?
The pressure gauge is set to shut down at 0.4bar(so no steaming really, but i dont drink milk coffee) so the temp is about correct.
Top

Very interesting, thank you j7on ! I wonder whether it's the reason why they have changed the lever design on the Stradivari, giving a different angle and a slight offset...
LMWDP #194
Top
← Back
By accessing this site, you agree to the site's terms of service. If you need help with the site, please contact us.