Older Cremina's don't have boiler pressure gauge installed so it is hard to know what the boiler pressure is. Most of the machines cycle within about 0.2 bars so the temperature spread is about 3°C or ~5°F.

Now since I use analog gauge for the boiler pressure I really can't know for sure the exact water temperature in the boiler but I think that I am in ballpark.

To measure group-head temperature I attached K-Type thermocouple to group-head and connected that to Fluke 54-II. That looks like this: 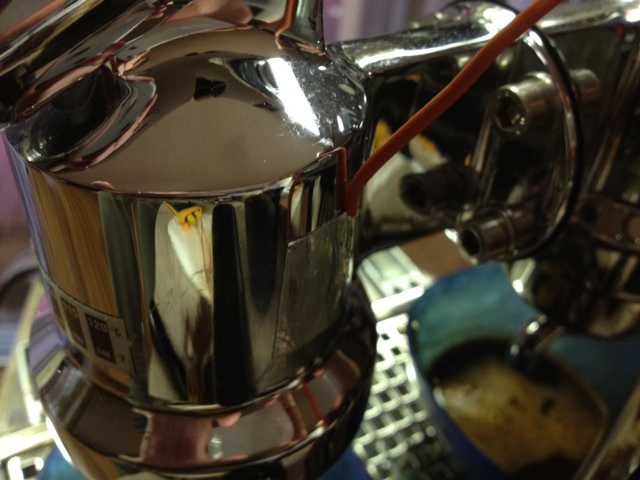 For this first set of tests I have pulled shots while starting the pull when group head was at 180°F and at set boiler pressure points. For each shot I just cooled down the group-head by locking cold portafilter in until the group temperature dropped to desired temp. I find this consistent and repeatable way to cool down group-head. 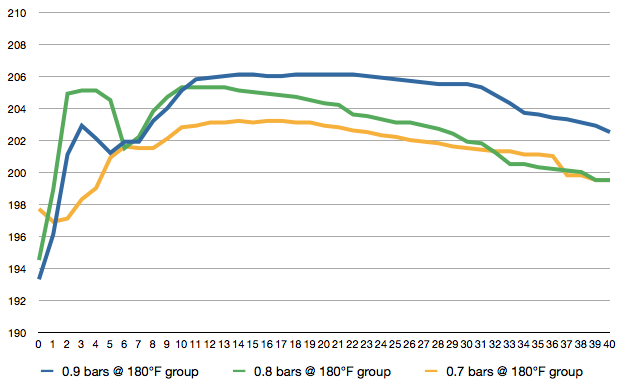 I repeated exactly the same procedure second time in round #2 and got these readings: 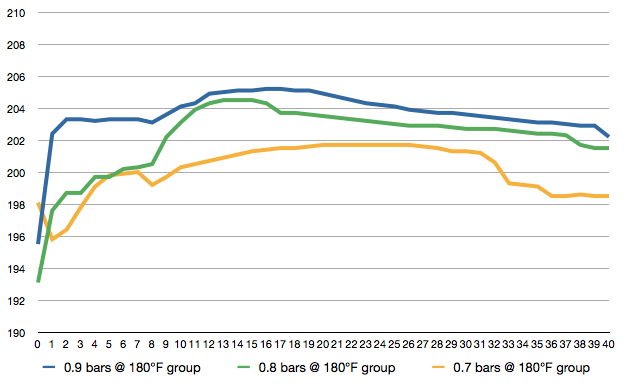 There is indeed variation but to me they are remarkably similar which means I was able to replicate with some variation the shot temperature profiles by simply starting shot at same group head temperatures and same boiler pressure.

Also what is interesting and encouraging about this is that if your machine cycles within 0.1 bars you can pull shot at any time while knowing group-head temperature and be within good shot temp range. And if you pay attention to time when your heater kicks in and out you can even tune shot temperature without having the boiler pressure gauge.

For the round 3 of this testing I decided to turn things around. I wanted to pull shots at same boiler pressure but I wanted to have different group-head starting temperatures. Goal of this would be to see how group head temperature affects shots temperature while trying to keep boiler temperature about same.

So here is what I've got, I did only one set of data since I was tired: 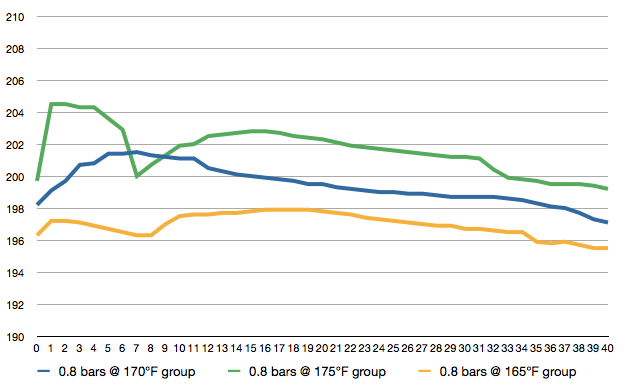 As expected cooler group-head results it colder shot while boiler pressure is about the same.

It is clear that we can control the shot temperature on Cremina fairly easily as long as we know the group head temperature. Knowing boiler pressure is very nice bonus but I do not think that is required to be able to get into the desired range: Cold, Medium and Hot. If your boiler cycles say between 0.7-0.8 bars, which I think is good range then:

For cold shot you get the group head down to about 165°F and there you go.

For medium shot you get group head to about 170°F and you'll be in medium range.

I am still awaiting the temperature strip with different range to put on machine and to use instead of Fluke. EricS (thank you so much) also sent me his small digital thermometer which is cheap and can be non-permanently (reversible, you can take them off) attached to group head to get digital readout on temperature so I will try that as well and report how it works out. I think that digital read-out is better since there is no temperature range as it is on temp strip which means that these can be used on other home levers like Ponte Vecchio, Elektra, Pavoni etc.

Also please keep in mind that I really think that being exact here is not the goal at all. People (and in my experience as well) have been pulling killer shots on Cremina without all this information for long time. The goal is to gain consistency and even better shots

So please don't get hang up on exactness and trying to get exact shot brewing temperatures. That would be crazy

, if I say so myself. Rather aim for cold, medium and hot and more likely just single range that you find the best for your taste...

I've used that principle to keep my PV and Sama shots at the cool end. Without temp strips, I just go by touch - if the group is in the "ouch" range, the shots tend to be a little on the hot side to me. I have not paid attention to the pstat on-off cycle, but I will start doing so.

In the end I've found that as long as I keep the pstat dialed down the shots taste fine at both ends of the range.

What is your impression of the flavor effects over the cool-hot range?
LMWDP #049
Hand-ground, hand-pulled: "hands down.."
Top

Great, very useful stats, thank you a whole lot! How did you get the group up to the temps? Did you slowly flush, do big flushes, or pump the thermosyphon without flushing? Was it easy? Today I really focused on the grouphead temp, and used the pumping technique, and the shot came out very nice.

I figure the top of the cycle would be easiest for those of us without a pressure gauge since there would be no counting involved, or accidentally waiting too long and the element turning on again. Do you think hitting around 200f at .9bar would need about 165 degrees? Judging by your graphs, I figure 2 degrees brew temp for every 5 degrees of grouphead temp. And 2 degrees for every .1 bar.

Of course, I'm trying not to be too exact here...

Well, with Cremina your biggest risk is really burning your shots. Your first shot might be little cold but on each shot after that you must take care of group head temp or you'll burn them. So my goal is to stay in acceptable range, say hover around 200°F.

Taste wise when you are too hot you get that burned/bitter flavor or the flavors start becoming overly intense. With low temps things flat and sour.


bostonbuzz wrote:How did you get the group up to the temps? Did you slowly flush, do big flushes, or pump the thermosyphon without flushing? Was it easy?

I pulled about 15 shots today on Cremina using technique I described here. To warm up the group after machine was up to pressure, I flushed little bit, did 1 half pump and I was at ~175°F group temp and ready to pull shots. Super easy. Anything will work that gets group up to ~175°F-ish

Then after that I had to cool down machine with cold portafilter. I was pulling coffees that liked hotter temperatures so I was cooling group head to 180°F and pulling shots at 0.7 bars. I had some Friendo Blendo that I took out of freezer and which I find very hard to pull on pump machine. On Cremina and with 17g dose this coffee was rocking. Just amazing shots and my wife commented how good they were and she does not even like fruity coffees. Just amazing...

Then I pulled some Big Truck blend and that was just killer with up front grapefruit/pomegranate and chocolate finish. Just fantastic espresso.

Technique as I described it works really well. I pulled 10 shots in row and got brew temps just in good range without any problems. If you tried to pull 10 shots in row on Cremina without technique like this you'd be burning most of them...


bostonbuzz wrote:I figure the top of the cycle would be easiest for those of us without a pressure gauge since there would be no counting involved, or accidentally waiting too long and the element turning on again.

You can target the top of pressure or bottom. For bottom just turn off machine and let steam out until you hear pressure stat click and you are at the bottom and can pull the shot.


bostonbuzz wrote:Do you think hitting around 200f at .9bar would need about 165 degrees?

So I finally got around to replacing my piston seals and getting a grouphead thermometer from Eric. I only had enough beans for one shot today, but it tasted a bit sour. My machine jumped up to 176 by the time I could pull, and the shot tasted sour. I also checked my pressure, and it's .75-.9 now. The shot tasted sour, but it probably should have been burnt. Perhaps our machines are different?

I'm curious, what is your grouphead temperature at the end of the shot? My stabilized at 182F, but I would think that it should be hotter.

Also, I ordered a teflon sheet to make a boiler/group thermal break gasket since my machine is stabilizing at 203F as opposed to your 170!!! The thermal break is the only major difference, I believe.
LMWDP #353
Top

bostonbuzz, do you have a picture of your setup with erics' thermometer? How did you go about covering the bottom portion and mounting the thermometer? I am daydreaming about doing something similar to my Livietta but I need to fix other issues first. Thanks.
Top

Eric sends it with some Aluminum tape which works great, and some velcro, but the adhesive melts. He's working on something else. In the meantime, I found a little powerful magnet I taped to the back works very well is securing it to the body. Even without the magnet, it seems to nestle right behind the lever well, and doesn't get in the way.
I pulled about 10 shots today and found that I could get the grouphead to 185 fairly easily, but below that and it became a real pain running the pf under water all the time. I'm curious to see what the teflon gasket will change in this regard tomorrow.

Don't ask me why the 3rd photo is distorted and sideways, I have no idea. 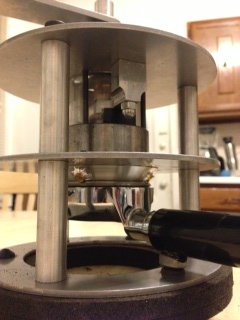 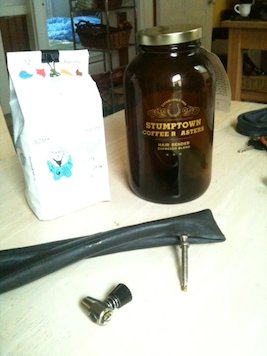 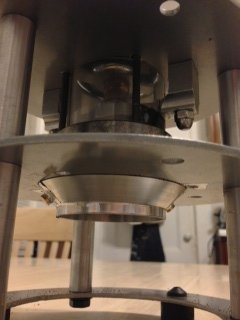 From a non-Cremina owner, so take gently -

I believe you are using too much tape to hold the thermistor in place. I would recommend you clean the chosen surface with alcohol and use a 3/8" x 3/8" piece of tape. Tape has an effect on the heat transfer of the group to ambient.

The thermistor should be located on the cylindrical portion of the group at the "height" location shown in the instructions.

I recently ordered myself a Millennium portafilter with spouts to use for cooling the group in place of my bottomless portafilter on the theory that it'll have more metal to help pull the temps down. Even if that is a wash, I'll be able to keep it in a cold water bath when I'm pulling a shot and lock it into the group while I'm building a shot in the bottomless handle which should help. Unfortunately, I won't be able to play with it until the end of December as it'll be my Wife's gift to me this year along with another double basket, a gasket rebuild kit, and a dosing funnel.
-Chris

Thanks for posting the photos, bostonbuzz. That's a very clean install using magnet. I guess this works on the Cremina because of the steel frame under the cover pieces. On the Livietta, I think I can mount this under the overhang. Thanks for the idea. I need to figure out my pump issue first, though.
Top
← Back •
By accessing this site, you agree to the site's terms of service. If you need help with the site, please contact us.