Someone emailed us these photos (we only have permission to use on our Facebook page) of their recently acquired old Bezzera lever machine. It strongly resembles a Ponte Vecchio. Take a look at the grouphead lever connection. What do you think?
Jim Piccinich
www.1st-line.com
1st-line Equipment, LLC
Top

The casing and the grouphead bridge looks familiar, but not much else in the details. The grouphead, for example, looks beefier; the lever pivots on ball bearings along a groove similar to the B2006AL; the steam/water tap valves are in front, not the sides. And most notably, unlike the Ponte Vecchio Lusso, the Bezzer's driptray looks functional.

We've seen a few like that on the lever forum. Sometimes called Bezzera "family" I think. If he wants to sell it let me know!

I heard tell once that it was the precursor to the Sama-PV line. But it has a different group, with the removable top, for piston access. I think it is 49 mm, not 45 like the PV. There are others around who know more about the groups etc.

I've been watching out for one of those myself! Thanks for posting,

The steam lever and labels for the steam and the hot water look like the Bezzera Milano. The top cup holder rack and rocker switch look the same as well.
Top

Looks similar to the Bezzera "Milano" or "Famiglia" (spelling??) that Juanjo used to own:
LMWDP #115
Top

I've always liked the look of that Bezzera, and am particularly jealous of the easy access piston & spring. As much as I enjoy my PVL, peeing around with c-clamps et al is a slight beef of mine. It should be a little bit easier.

But then again I haven't had reason to break into the pistons for about 1 and half years now.....
Top 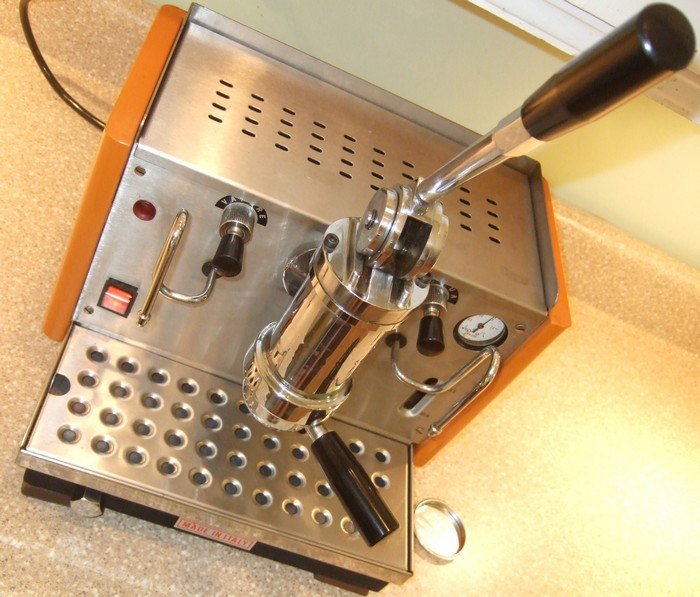 Except for the copper body (mine is orange), and except for the steam knob (which I'm guessing is a replacement, the original was probably a lever). As peacecup says, the group is 49mm. From what I've read it is a Rossi group (as opposed to a Zacconi) that was also used by Elektra. I think it is from 1978 but I can't remember why, I might have seen a date on one of the internal components.
Top

My recollection is that mogogear had 1 or 2 of these Bezzera's that look like an Olympia Club.
LMWDP #162
Top

ziobeege_72 wrote:I've always liked the look of that Bezzera, and am particularly jealous of the easy access piston & spring. As much as I enjoy my PVL, peeing around with c-clamps et al is a slight beef of mine. It should be a little bit easier.

But then again I haven't had reason to break into the pistons for about 1 and half years now.....

This machine is very much like my Sama: also a precursor to the PV. My Sama has identical steam fittings as the Bezzera's pictured here- but a different group. Mine is also 49mm same as the Bezzera (but actually an Mcal group), and also has a group where the top comes off with 2 hex nuts. Changing seals is a BREEZE.

I was wondering if it would be possible to simply cut the top off of a PV group- and drill/tap two holes so it can be screwed back on. This would make it 'quick release'. It looks like there is enough metal there to do the procedure. A small change but a world of difference.
Top

Not sure if the 45-mm group leaves enough space for drilling and tapping, and how it might hold up to pressure, etc. It might need to be re-designed to have some kind of flange on top.

Might be easier to just bolt a different group on, if one could be had.

It is a bit of a pain to disassemble the PV group, but as noted, its normally only a once every few years job.

I like the 45-mm group and basket design a lot - not sure if the 49 is equally forgiving (I think they always have tapered vs. straight-walled baskets?).
LMWDP #049
Hand-ground, hand-pulled: "hands down.."
Top
← Back •
By accessing this site, you agree to the site's terms of service. If you need help with the site, please contact us.