Ok, This is not MY Caravel.. but I ran into the owner of this one online trying to find out anything about parts, diagrams or just general knowledge. So he has this one and is also collecting old machines from Italy. He is planning on refurbing them so maybe he can be coaxed into joining our merry band and share his exploits.?( mine is shipping through Italy- hopefully to me! in 3-4 weeks)

These machines were made in Milan starting in the 1950's by a company called Arrarex, with a moniker of VAM designed in the drip tray grate. It is a non-spring actuated lever machine.( mine is cream color but other than that exactly the same... I think) 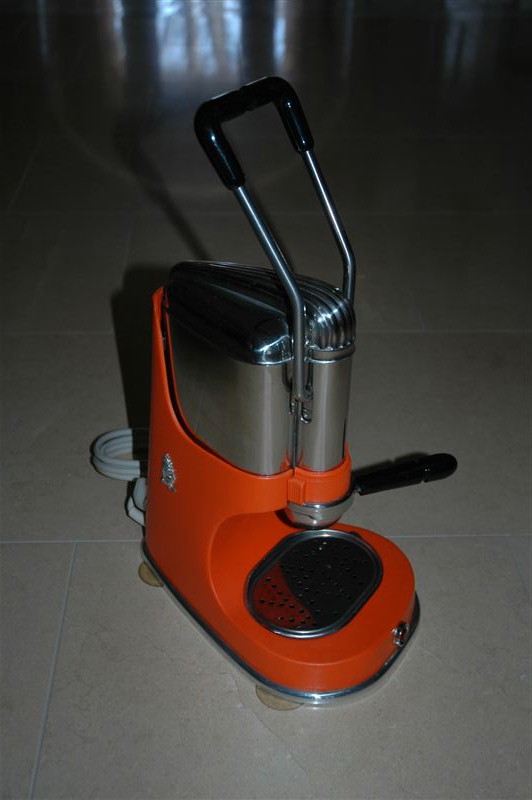 Ok, now this shot is with the top removed. There is an open boiler, that looks to be huge!!! I have a email asking the owner what the volume is.. We'll see. 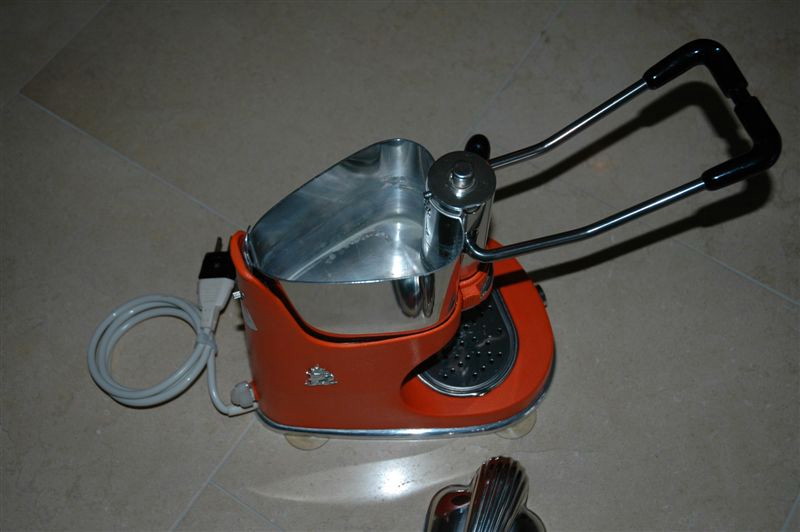 The owner also added that all the parts can be removed with no tools. I gather you push in some spring loaded buttons to release the various components. So this shot is with the top and the boiler removed ( which has the group attached to it. I'm guessing the element just sits under the boiler??? How efficient that is remains to be seen. It will keep the element clean however!!!. 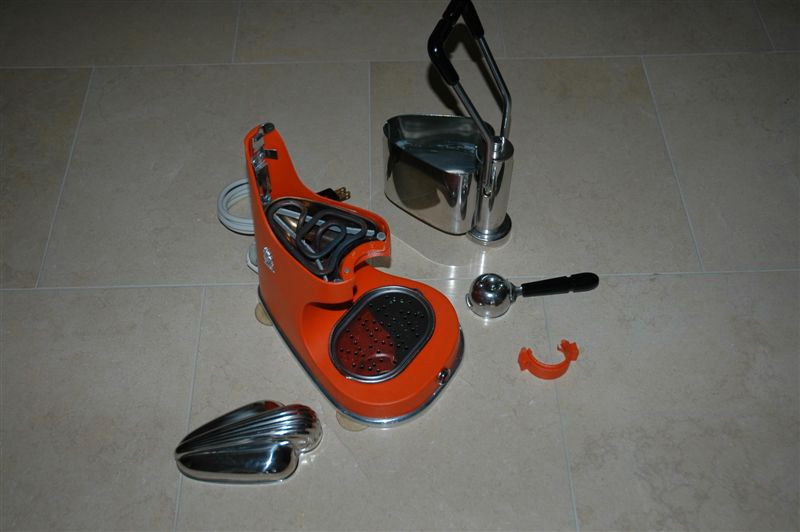 Ok, that's all for now. I can't wait to get my hands on mine and see how she works
greg moore

It's a shame that this "boiler at brew-temp" design didn't seem to meet with much success, there probably isn't a big enough espresso-only market to keep them in business.

The heating element placement sure is peculiar. I had the impression they needed to be completely immersed in water!

Looking forward to your impressions,

I have to agree with you. I didn't know what to expect- but a boiler on top of the heating element was a total surprise. As far as how successful they were I can't speak to. I have seen about 9 of these on Italian Ebay in the last 6 weeks. They have sold for $85- $250 They were made from about 1955 -ish to sometime in the seventies. I seen them in green, black, Ivory, red, orange. They have handle( lever and portafilter) that were black or ivory.
Italy was/ is very - Espresso only. It was the rest of the world that seemed to crave cream. I am hoping that the metals used are as they look- the boiler out of s/s etc. I also hope physical stability is not an issue- Note the big suction cup feet. Heat stability is also a head scratcher- that is a huge looking boiler from the picture, I'm betting that there is a fill line at about a 2 liter amount?? We'll see.
greg moore

Let's hope that the boiler is attached securely - wouldn't want to see a boiler flying at your face on the downpull.
Top

mogogear wrote: Heat stability is also a head scratcher- that is a huge looking boiler from the picture, I'm betting that there is a fill line at about a 2 liter amount?? We'll see.

With that amount of water it ought to be quite stable and easy to control. Plenty of time to warm up the group head/cylinder as well.

Do you know what functions the knob at the back has? Is there more then one temperature setting?

The boiler volume is a strange one- The owner just confirmed back to me that he thinks the volume of the boiler is only a pint????? That just looks too small for what I'm seeing. Since there is nothing other than the floor tiles for scale in the pictures I was assuming closer to a liter to 2 liters. Time will tell. The switch on the back that you noticed is a dial heater switch. Off in the middle position and left for low- brewing temp and right for high- initial warm up- like the older La Pavoni machines. Other than that thereis an indicator light on the front of the base.
greg moore

I thought the boiler looked relatively small in the photo - I bet it's 1 Liter. This is actually plenty large in my opinion anyway. My PV is 0.8 L - enough to make as much espresso as two people can drink in a sitting. Besides, I almost never heat the water twice - I doubt that water reheated in a boiler does much for the flavor of an espresso, and I'm cautious about heavy metals, etc. After I've pulled my shots I run the rest of the water out through the group, and only refill before I brew again. I seldom find overheating a problem with the PV - I just chill the portafilter in cold water, and sometimes place a cold rag on its forehead (i.e. grouphead).

The Caravel will be simple to deal with in this regard. I'm anxious to see what the boiler is made of - I would guess the Italians were not using much stainless steel in the 1950's, so it may be some type of plated metal. Its looks like a true classic, so I'm looking forward to some action photos. I've been thinking of a way to make a horizontal handle like that for my PV.

I'm not sure I understand the advantage of the open boiler - as I mentioned I have not had many overheating problems with the PV, and I do occasionally use the steam wand.

I just filled up the stainless reservoir. It holds 3 cups.
There is an adjustment screw on the back of the machine for the thermostat.
My unit is a 110v machine as indicated on a sticker, and it has an Italian plug. I don't know how common that was.


Any other questions?
Top

BTW the portafilter is about 43mm.
The switch on the back only has one position on/off.
It's a fun little machine, but kind of on the verge of being a toy.
I used to keep it in my office and fire it up once in a while to pull a spro.
Top
← Back •
By accessing this site, you agree to the site's terms of service. If you need help with the site, please contact us.