Well it didn't take long. The Gaggia became a nice hot plate and nothing more rather quickly. I used it about once every 3 days for comfort during the time my Pavoni frothing was dreadful and until I realised the shot was bland compared with the flavour from the Pavoni. The Gaggia was then moved out of the way and is destined for a cupboard or for donation, probably my parents so I can take some freshly ground home roast around and pull a shot there

I will add to this with some roasting pics and shots pics over time.
Coffeetime (UK) Greens Club
http://coffeetime.wikidot.com/
Top

So, I claim the next LMWDP membership in line, being the first member that got the sublime message in needing to be part of the movement as told in the other thread. Maybe I should tell the story in all its glory one time, because it's a nice one.

oliof wrote:Maybe I should tell the story in all its glory one time, because it's a nice one.

Forget the maybe. Please tell all!

For 20 plus years I have had one espresso machine or another, beginning with a small Gaggia pump, soon afterward getting the new Bezzera "family" machine, seen here. 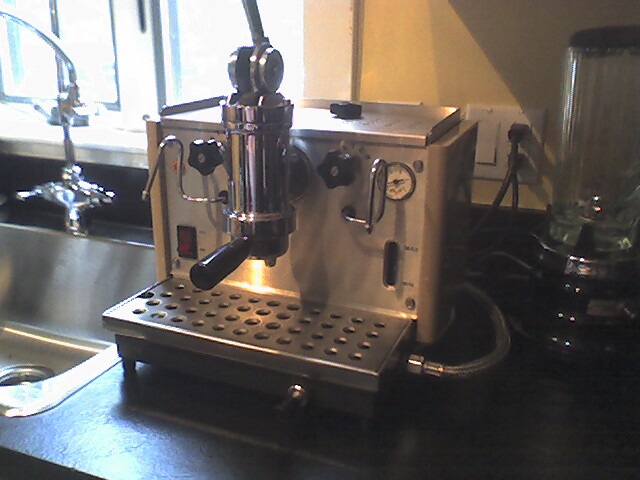 The machine is plumbed in, but it is a manual fill.

I have also had a Europiccola, and a La Peppina, but they were not as comfortable to use as my Bezzera. Living in the Boston area, I was able to get the machine serviced by Rino Gnesi, the US importer of Bezzera's. I never considered doing any work myself until I started reading this website. I appreciate all the information you have made available.

I hope I qualify for a LMWDP number.

Karen, thanks for sharing your story and the picture of your nice looking Bezzera. The LMDWP membership numbers are self-serve and you are welcome to the next in line; following back in the thread, it appears to be #26. Jimmy jumped in line for #24 and Lino asked me offline for #25 (he can fight it out with h00ktern if he so chooses offline). The next member number is #27.


h00ktern wrote:I notice espressoperson has LMWDP #24, and am hoping that I may become privileged to display LMWDP #25; I have personal reasons for desiring twenty-five...

I had personal reasons for wanting that number as well, however I'm drawn back to my Groucho Marx principle. I don't like to belong to any group that will have me as a member. No reflection on the group, of course.

I will remain a SAOTLMWDP.
(that's Staunch Ally Of The Lever Machine World Domination Plot)

Besides, I have my own plans for world domination.... Muahhh Haaa Haaa!

That aside, I'll have more later on my struggles with the MicroCimbali (and the resulting hole in my ceiling...)

I'm new to home barista, but I almost passed out when I saw this post - let alone posts about all sorts of lever machines... I am not alone.

I've been into espresso since I was about 15... which is going on 20 years ago now.. sheesh! I have no idea how I would have survived any finals, hang-overs, or just morning now with a nice double-cap. Mmmm...

Well, I stumbled into lever machines - literally. I was rolling though garage sales with my dad one morning and I stubbed my toes on this old square, copper hunk of junk. My pop, being a damn clever dude, offered the guy $40 bones for the toe busting piece of $#%&! and the guy said sold!

Dad took his prize home and I was off doing other stuff. In my absence, my dad had chopped up several leather belts trying to create a piston gasket for this old lever machine. No dice.

Being internet savvy, I rolled online (with like a 1400 baud modem back then!) and found a shop in San Francisco to fix things up. I almost passed out when the boys at Thomas Carra told me it would be $150 bucks to fix up the old machine - but it would be worth it. When we got it back, it worked like a champ and served my dad well for many years.

I've called it many names: Mister Copper, Old One Arm and even, Precious! Watching Lord of the Rings - I think precious is most fitting- I remember my dad being so hard up for a shot, the poor bastard repacked a spent puck and tried to suck some more cremma out of it.

Yeah... it didn't work. Damn funny though to think of now. Especially since my order of Ambrosia is on the way as I write this.

My dad passed away about 7 years ago. And Mister Copper, One Arm, Precious is sitting on my counter and produces 5 or 6 doubles a day. I've got my wife hooked too...

Until I found this forum, I'd been on my own. I had no idea anyone else out there, aside from Tomas Carra guys knew what my old Cremina 67 was.

I've used a Francis X1 and some other machines, but nothing holds a candle to my precious. I have a feeling I'll be pulling shots with it until I stop waking up in the morning. And, heaven forbid, something should go wrong with it.. something disastrous... I'll pony up the $2500 clams and buy another. It *is* worth it. If only cars, computers and friendships were built to last as well as my Olympia.

Anyhow, my machine is number 7310736. I'd be willing to share what I know and learn what I can from you guys. I'd love to be part of the project... just give me a number!

Glad to find you all.
Regards,
Patrick
...better make it a double!
LMWDP #030
Top

It's been about three and half a year that all this happened.

Before that time, I haven't been drinking coffee or espresso at all, despite coming from a highly-caffeinated culture (my parents didn't have breakfast without a pot of hand-filtered drip coffee, which I made for them often; then I studied computer sciences, and there are some heavy users as well...).

My wife and me had just recently moved from one flat to another, but without leaving our part of the city. There is a small portuguese cafe at the corner, and all I got from there was some nice croissants until now.

One day, we take a walk around, and at that same street corner, just opposite the cafe, an espresso machine sits on top of the paper waste container, with a little note sticking on it...."still working! have fun!". I saw the beautiful thing that was an old and slightly abused Cremina 67 and stood still in my tracks, my eyes fixed on the beauty of mechanical simplicity.

After taking a few more steps, my wife realized I had stopped. She turned around and looked at me. Followed my gaze. Looked at the machine. Looked at me "We don't need it", she says, "You don't even drink coffee!". "Yes, right", I answer, "but it's a beautiful machine, You drink coffee and Latte Macchiato. We might have guests that enjoy a sip." "I don't even know if it fits somewhere in our kitchen, and it is possibly broken!" "Well", I reply, "that might all be true, but this is too good an opportunity to pass. Let's just take it with us. If it's broken, we can bring it back here. If it does not fit into the kitchen, we can give it to a friend as a present..."

I feel the resistance is broken. I am allowed to take the machine back home. A short inspection shows the machine could work, I just need to get the water tank open, as the boiler seal sits very fast. A little help from Mr. Wrench helped solve that problem. I gave the machine, which was in bad shape, a rough cleaning job.

Then, the first test, and two Latte Macchiato, the machine is destined to stay. It's now part of our daily routine - no morning without a nice espresso and some steamed milk.

I am the proud owner of machine #7718708. I exchanged the portafilter holder because the chrome on the inside peeled off. The machine is probably not in the best shape, but I have almost no knowledge of espresso machines. It would probably be worth bringing it into a shop that knows about this kind of machines though.


PS: At approximately the same time, my boss bought a Saeco Incanto Digital Full Automatic Espresso machine. His has been in for repairs about half a dozen time because of different breakage. Talk about technical advancement!
Top

I had personal reasons for wanting that number as well,...

I thank you sir for your honor. I sat on this thread for quite awhile, waiting to time my post. In the event I leave the plot, I will relinquish this number to your care.

Who do I have to bribe to take a number?

...better make it a double!
LMWDP #030
Top
← Back •
By accessing this site, you agree to the site's terms of service. If you need help with the site, please contact us .