That Regina you've posted is surely nice, would like to get hands on one of these.. Just the right size, where the arguments about countertop space doesn't become an issue with the wife

It is though impossible for me to find more info on the net, searching Regina, is it produced under a different name as well?

I believe the tan colored gaggia on flea-bay is pretty close--$995! which is stepping up to the plate- they look close in series to the Gaggia Compacta Palanca owned by Bill in Dallas
greg moore

If anyone is interested in the Gaggia Greg mentioned I believe the Ebay seller is the same one Dr Jim bought his Conti Prestina from. As I recall he was favorably impressed with the seller.
Bill
LMWDP #43

I wasn't born in Texas, but got here as fast as I could!
Top

Nice machine! You're right, resembles somewhat the Palanca, myabe this one was also produced in spanish Gaggia, as I believe the Palanca was?
However shipping weight of 100lbs and 110V doesn't really sound appealing when one's situated on Iceland (though normally living in Denmark, both places though with 220v) So I'm mostly searching the european market for nice levers (having the luck of being somewhat nearer towards Italy than some of you guys

I saw that Regina on ebay.fr a while back - never seen another. I think they had trouble selling it and it had to be relisted at least once. I'm not sure if they ever sold it. Try searching with regina+ some french terms for coffee.

I was not going to post a picture of my lever machine here as I've posted multiple pictures of the rebuild. However, I just spent nearly a month at my shop far away from my CMA lever box and have been existing on drip coffee and Peet's espresso.

Never again! after plugging in the Astoria and pulling a shot for the sink, liquid heaven. I don't think I'll ever be able to go that long again! So here is Mr. Square Pants, Not the most pretty machine but what a performer! 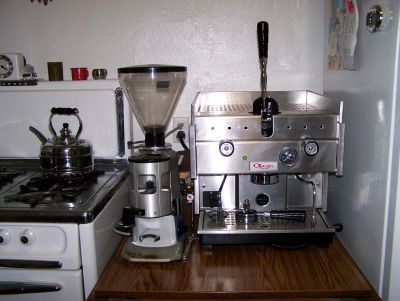 I recently visited Cafe Doma's Roasting facility to purchase some green beans. While I was there I took these pictures of the most beautiful lever machine I have seen to date. I have also sampled some of the nectar it squeezed out of the meticulously roasted Cafe Doma Vito's Blend--"HEAVEN." This machine, or should I say work of art, is hand crafted in the Netherlands by Mirage and is called the Classic Idrocompresso. Take my word for it: pictures do violence to its beauty, or at least my photographic ability (or lack there of) does. 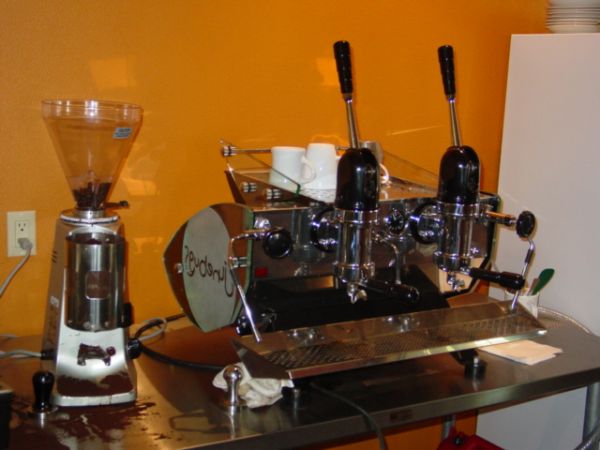 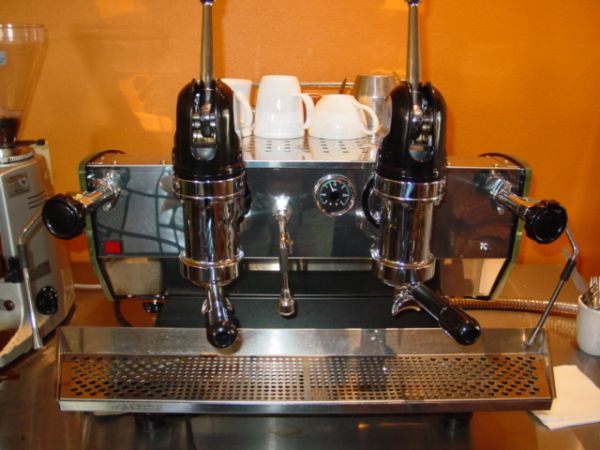 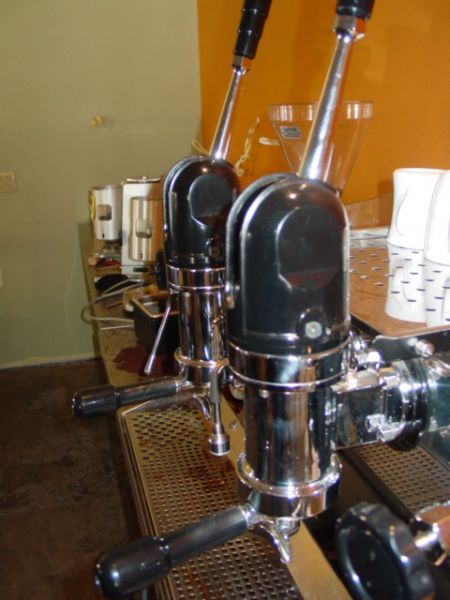 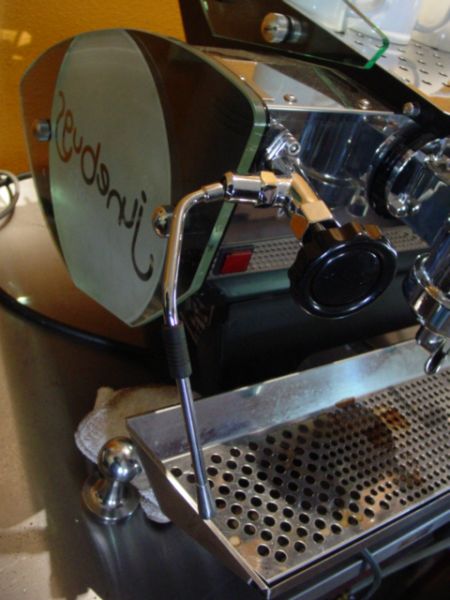 This is the foot switch that activates the steam wand hands free. 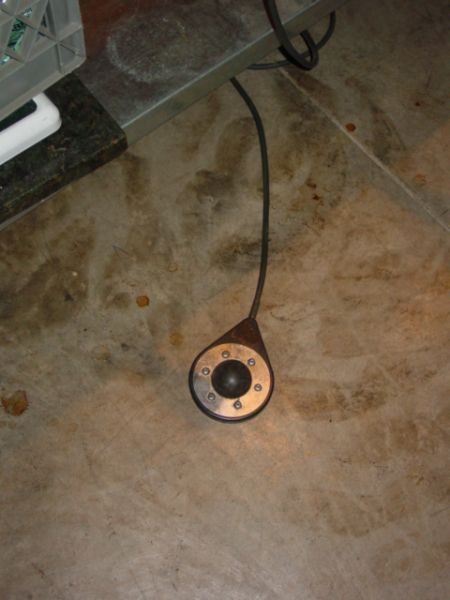 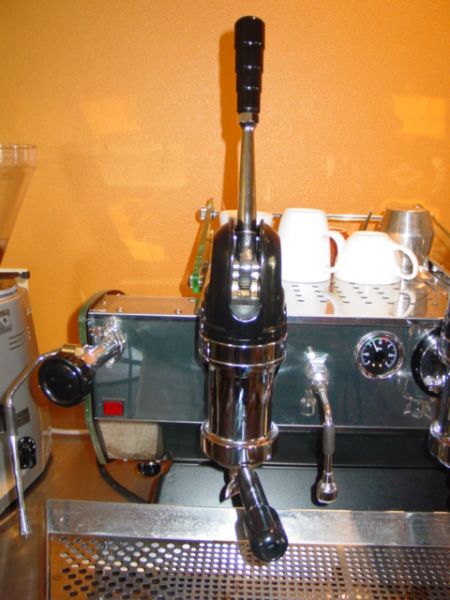 easy does it Greg - you're beginning to salivate

All right i'll say it and risk banishing to the HX circle: am I the only person who thinks the mirage look like a nasty piece of 80's rieperbahn night trash? I can see the workmanship but they sure is spikey ugly!

Ha, even if you get banished to the HX section I would have to assault you with THIS! 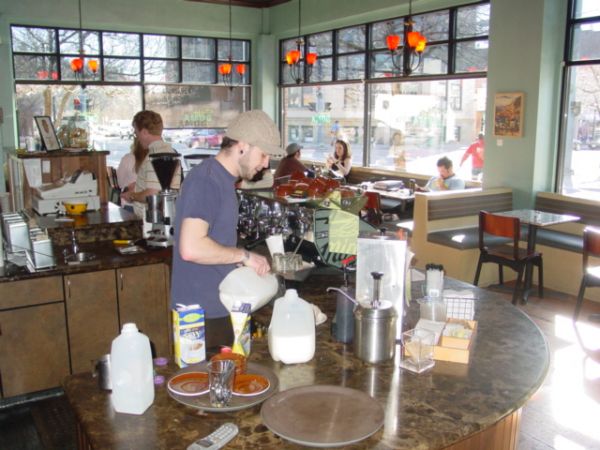 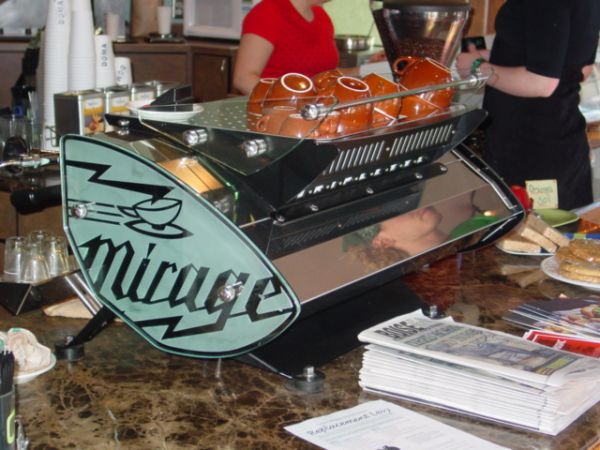 Lance Goffinet
LMWDP #019
Top
← Back •
By accessing this site, you agree to the site's terms of service. If you need help with the site, please contact us.