The 'Fellini Move' in Pictures

After no little fuss and bother, I was able to find yet another DVD of Fellini's 'Orchestra Rehearsal' and grabbed the following snapshots using VLC Media Player which is all I've got for video capture on this machine.

For those who are interested, the scenes which include the lovely 4-group Gaggia and the Barista run from 36 minutes to roughly 38:30 on the DVD release.

Here's a shot of the Barista and his 4-group side-lever Gaggia - note that the number 3 group is apparently jammed with its lever forward, a very common problem with these machines due to uneven piston wear - also note the grinder full of 'North Italian' roast - a decent cinnamon color, not the inky black beans sold to Americans as 'espresso roast.' 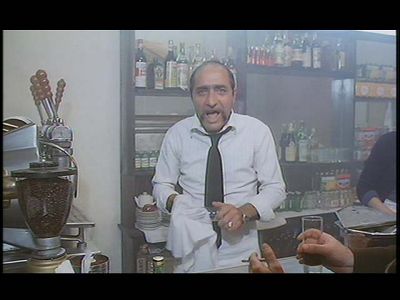 Here's an establishing shot with the 4-group Gaggia in the background - sorry for the poor quality and obstructed view - it's the best I can do at the moment: 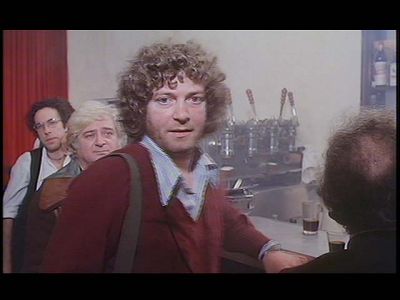 In this shot, you can just barely see that the Barista has brought the lever down into the pre-infusion position and holds it there for about 4-5 seconds. Early Gaggias had no pre-infusion detent, you just held them down - later ones added a notch in the operating cam, but since it soon wore smooth, no one relied on it and continued to hold the lever down. 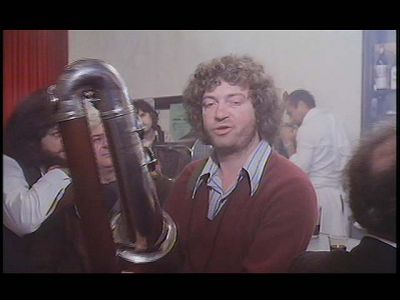 Now, the Barista brings the lever up out of pre-infusion and raises it about 1/4 of its stroke in a move which is basically a rocking motion 'Lower, hold, hold, hold, raise, lower, release.' 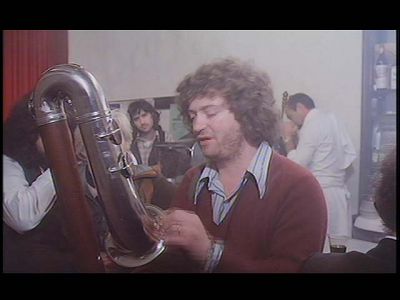 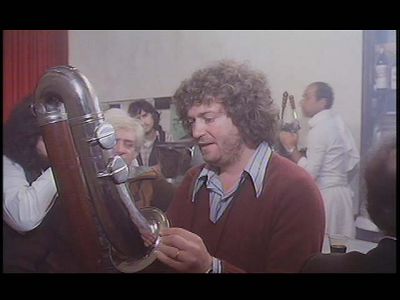 And release to let the spring complete the pour: 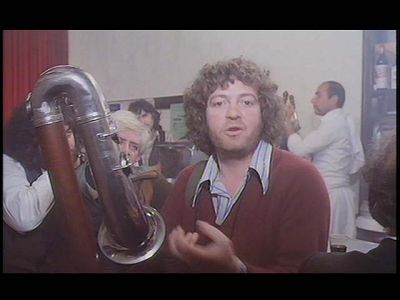 As a side note for you true lever-freaks, the Gaggia, Astoria, Riviera, and Elektra spring-lever groups are all decoupled designs, where the piston and spring are compressed by the lever acting on a cam. This means that while you can slow down the extraction by retarding the lever's rise, you cannot speed up the extraction by lifting the lever because there is no direct connection between the lever and the piston.

OTOH, Victoria Arduino, Faema, and Conti machines do have linkages which directly connect the lever to the piston and hence they act more like a Pavoni or Olympia machine in that you can have very precise extraction control by retarding or raising the lever.

I hope that these pictures are of interest to folks here - given that Fellini took pride in using real people doing real work, and given the obviously well-used condition of the machine - I have little doubt that we've been given a very rare glimpse of a 'Golden Age' Barista doing what he did every day.

Very Nice post Dr. There is certainly something magical about the golden age, and the lever machines that went with it. I found a VHS copy of Orchestra Rehearsal even here, in our rocky outcrop of a last-frontier city. I plan to rent it next weekend when I run into town to pick up a bag of freshly-roasted Raven's Brew. Actually, I shouldn't complain about being in the last frontier- we have three excellent local roasters, with SO's and blends from all corners of the globe. The quality of the commercially available beans here has happily kept me from starting to home roast.

I've been an instant convert since I read your first Fellini post - I've used the quick pump technique almost exclusively. I don't recall one cracked, channeled, or soaking wet puck using this method. I seems to aid in producing a very uniform extraction. I working up my courage to let the first pre-infusion drops fall into the drip tray (or at least into a different cup to taste).

I saw your post on the Conti - it looks like a real gem. Are you still finding time for brewing with your PV Lusso? Have you found the coupled design of the Conti more or less favorable? With the PV there are times when I've found myself trying to apply pressure to directly to the piston rod (which tends to be HOT) to augment a slow pour that I know just needs a little extra push to make it great. Seems like to coupled design would help with this.
LMWDP #049
Hand-ground, hand-pulled: "hands down.."
Top

Here's the whole clip for those interested: Richard
Top

peacecup wrote: I plan to rent it next weekend when I run into town to pick up a bag of freshly-roasted Raven's Brew. Actually, I shouldn't complain about being in the last frontier- we have three excellent local roasters, with SO's and blends from all corners of the globe. The quality of the commercially available beans here has happily kept me from starting to home roast.

I'm sorry to hijack like this, but where are you Jack? I googled that raven's brew and it said it was a roaster from Alaska? Aren't you in Sweden? What roasters are you talking about if you could be so kind to inform me?
Top

You might note that my previous post was from 2006. Raven's brew was, and I suppose still is, in Alaska. They do ship internationally, but I'm not sure how they would rank compared to other roasters. They did have some tasty blends though, and great art work.

The espresso machine maneuvers are lost on me, because I can't get around that preposterous thing the actor is holding. I guess he's the contrabassoonist listed in credits, but that is no contrabassoon. It looks like they took the bell off a tenor saxophone and mounted it on a wooden pole.
Top

Excuse me for my ignorance, perhaps - but why do we believe this barista knows anything about pulling a shot? Is he an actor, or the real deal, or both? Is this origin of the Fellini Move?

Is he not just doing some random barista thing, like flushing screen or warming group. Or warming cup. Just watching the guy move makes me think there is no coffee in that basket.
LMWDP #277
Top

It's a contrabass clarinet.

http://upload.wikimedia.org/wikipedia/c ... n_Bate.jpg
Top
← Back •
By accessing this site, you agree to the site's terms of service. If you need help with the site, please contact us.