hello
the machine is 100% chrome plate. the gold is not origin. is a " marte" (Mars planet) 1950 bakelite black is a " made in france" the groups use 2 technologies: thermosyphon has 60% and groups fixed at the boiler for a espresso except standards!!!
best regard
Andrea
Top

The handles are brown (but that doesn't show in the picture)

I have used the machine regularly for the past 8 years and have never understood the purpose of the taps at the side of the group. The tap controls the flow of water though a coil that sits above the boiler. Is it used to introduce slightly colder water or is it part of the thermosyphon?

I have included a rear view photo of the machine 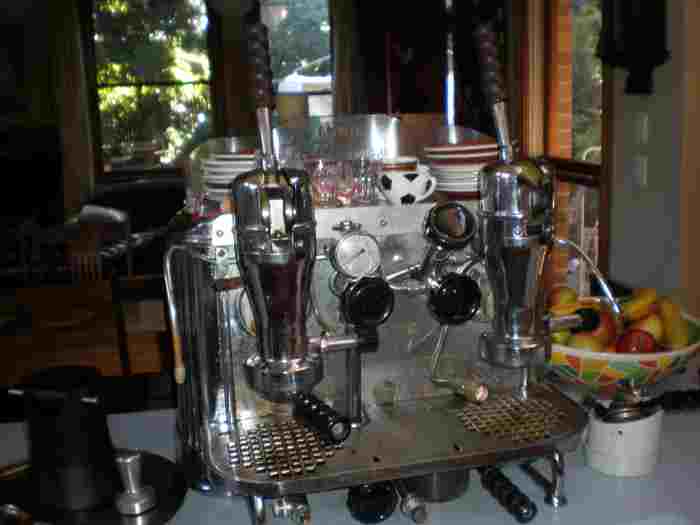 hello graeme
i have speak too quickly for the version!!! afflicted is a " made in italia" faema milano, 2° generation of group without circulation thermosiphon 1954. the 1°generation group is that : 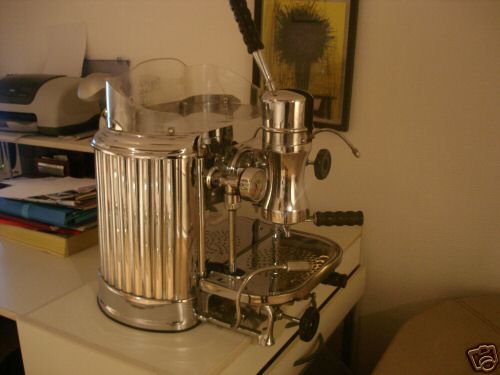 by removing the thermosiphon the group loses power with the first coffee too much then heating with the last. logically the serpentine in the machine is connected on the vapor, the taps on the groups or it finishes receive condensation water which stabilizes the group thermally (is not practical utilisation!)
a machine is big class espresso,that dont change.
best regard
Andrea
Top

channo wrote:the 1°generation group is that ... by removing the thermosiphon the group loses power with the first coffee too much then heating with the last. logically the serpentine in the machine is connected on the vapor, the taps on the groups or it finishes receive condensation water which stabilizes the group thermally (is not practical utilisation!)

Hi Andrea,
I suspect I have a curved group machine with a thermosiphon. There is a valve and a gallery inside the group casting that connects the volume above the piston with the top of the boiler (no exposed coiled pipe as in some of the later models). I think hot water comes in through a pipe and gallery from the bottom of the boiler, also into the volume above the piston, which has a separate seal on the piston shaft to keep the water and steam in. You can see where the valve is on top at the back (Commande de starter rechauffeur) in this drawing from some contemporary advertising. 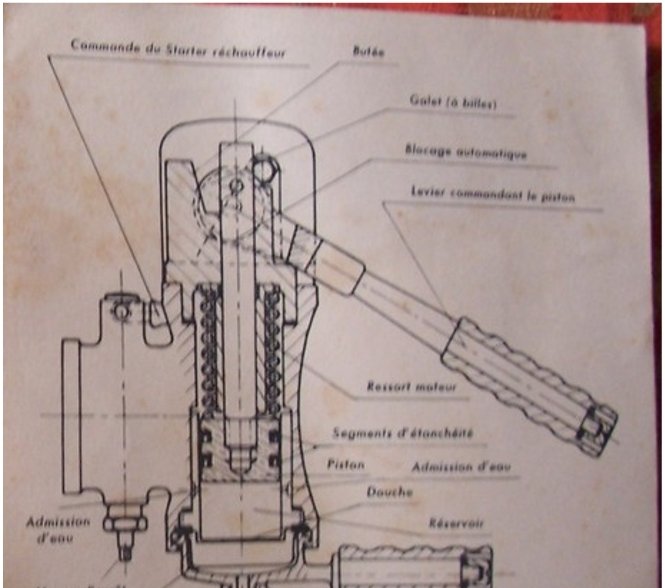 There appear to be quite a lot of intermediate forms. It might be interesting to collate them somewhere. there are at least two kinds of the curved group type, and a few more of the conical and parallel sided ones too, with and without exposed thermosiphon pipes.

hello
the system of thermosiphon is not in amplitude a heat exchanger as on e61 but in a movement water. the spring, the body of the group around the cylinder is full hot water. when the lever l' is lowered; water turns over in the boiler pushed by the piston towards rise. l' water takes again all l' space in the group during descent exploitation espresso. the maintains thermal with the comparison between the group and boiler water thus thermosiphon has 60%. second characteristic the fixing of the group in contact boiler left steam, because a steam pocket is present for stabilization. carried out tests has 2kg in pressure steam,the coffee exceeds imagination carefully and body, is the must.
bonne journée
andrea
Andrea
Top
← Back •
By accessing this site, you agree to the site's terms of service. If you need help with the site, please contact us.