Based on some of the interest recently on lever machines, Dan and I thought that it would be fun to do some side-by-side comparisons of two of the more popular lever machines.. the la Pavoni Europiccola and Elektra Micro Casa a leva. Dan is being kind enough to let his Elektra out of his living room on work release and I will be using my trusty Pavoni that is almost a vintage machine now at 9 years old.

Introducing the Elektra into my workspace was like welcoming a rock star to your home. This thing has presence. First, being Dan's machine, it has its own travel case. I felt like a roadie, lugging this hard-sided beast with its custom foam inserts. Actually, since the levers are very easy to travel with the case makes a lot of sense if you are carrying it on vacation or using it between locations. I have taken my Pavoni on several road trips and the case is a nice addition.

With minimal set up...screw in handle, water fill, spare outlet and getting all the pieces in place, it took over my wife's remaining counter space in record time. 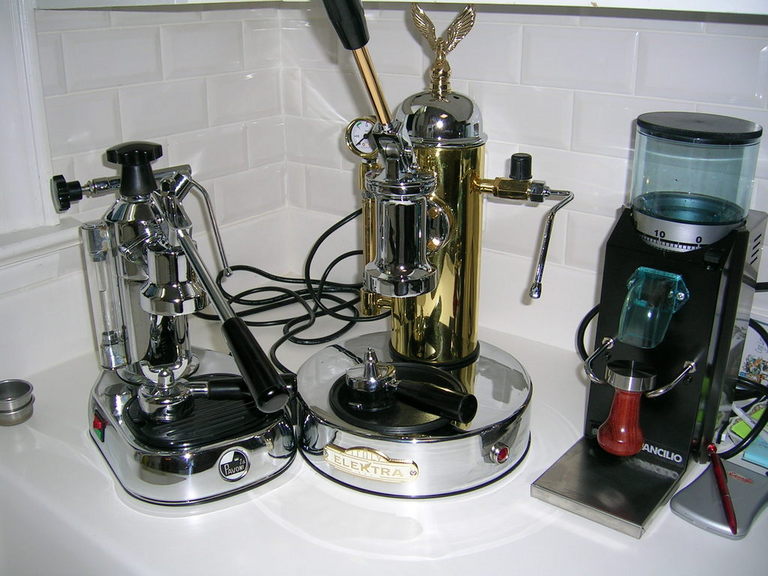 I just love the look of a lever machine. While both have similarities, visually the two machines have very different looks. The Pavoni has been described as more industrial...deco...functional. The Elektra while following the same basic shape has embellishments that show it as part of a line of traditional espresso machines that you see throughout classic Italian designs. The eagle, the dome top and even the logo, all exude presence and quality.

The nice thing about both machines is that they both pass the "wife test" and both look great sitting out.

Now both being countertop machines, one thing to note is the Elektra will be a bit fussy on placement. While the base unit fits about anywhere, if you are flying the full eagle, it may hit some cabinets. Also since its lever is in the more "erect" position than the Pavoni, we found out that the handle interfered with cabinet opening as well. 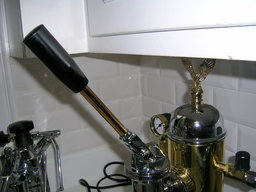 While I have worked with both these machines independently, I was hoping that running them side-by-side would give some insight with regards to slight differences, reaction to grinds and effort involved. On the first day with both of them, this type of testing also resulted in a discovery that I had never seen in any write-ups on Pavonis.

One of the first criticisms of the Pavoni is basket size. The single basket is a joke and even the double leaves a lot in the hands of the barista for a good pull. With the Elektra, even though it uses the same diameter basket as the Pavoni, has a much deeper basket. 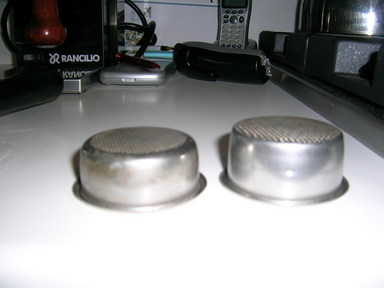 For kicks I placed the Elektra basket in the Pavoni portafilter and damn if it didn't fit. Those of you who have ever used the Pavoni understand what it means not to get an additional 25% more coffee in the filter and being able to pull some real doubles with 16.5 grams....God was smiling on me. I spent the next couple hours pulling some of the best lever shots of my life.

I am trying to convince the wife that this should go on this year's Christmas card: 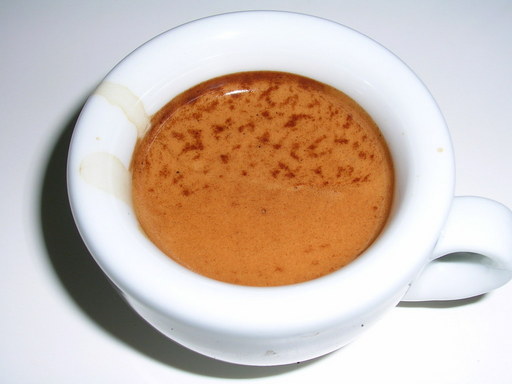 Of course testing slowed down as I tried to find where to get some extra baskets once I returned Dan's. Jim over at 1st-Line says they have them in stock...so order goes in tomorrow.
Steve Robinson

Now, while both of these machines are considered manual levers, there are some key differences in how they approach the pull. The first indication of the difference in these two machines is the comparison of their group heads 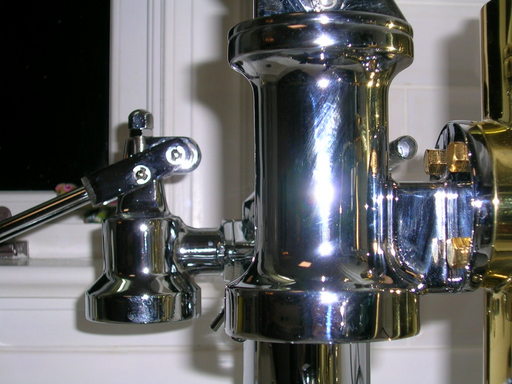 While dispensing about the same amount of fluid per pull, you quickly realize that the Elektra has something else engineered into it to require a group head almost twice the size of the Pavoni.

The Pavoni is a full manual machine, meaning that you manually push it to the top of its stroke and then it is up to the user to apply the necessary pressure on the handle during the pull stroke. Some feel that this adds more variability to the Pavoni process, while others will argue that it give the user more control over the shot.

The Elektra machine removes this variable by utilizing a massive spring to control the downward thrust of the piston. The manual step is to load the spring and bring water into the group head and then the pressure of spring controls the piston to give you a consistent down stroke with each shot.

I pulled the head on the Elektra to give you a view of the spring and piston: 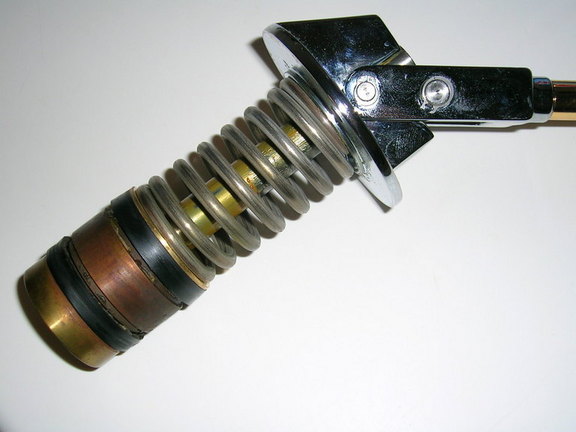 While I had the heads open on both machines I thought I would also compare the pistons and gaskets, since this is the most common maintenance that you do on these machines...

I have covered gasket replacement on the Pavoni in my refeathering thread but, it is worth a quick look again at the piston: 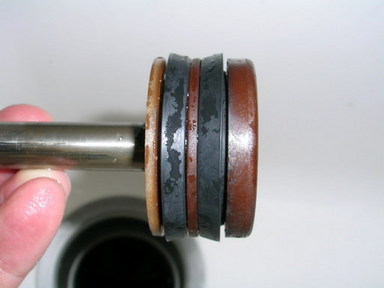 Piston is make of a high density plastic and the two primary gaskets are identical and installed in opposing directions.

Now on the Elektra, the piston is solid brass with two unique washers. It is also clear that you can replace these washers without having to deal with the main spring. 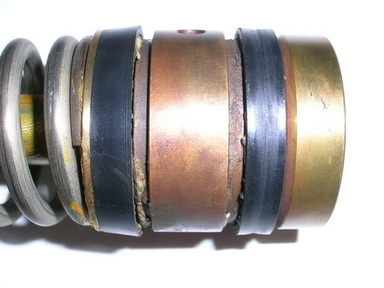 On both of these machines, the group head fills with water at the top of the piston stroke. Pressure from the boiler forces water into the cylinder and then the lever pressure forces the water through the coffee puck. It is worth noting that on the Elektra there is full pressure on the lever until water enters the group head. Since you are pulling against a large spring, if you release the handle prior to the water filling, it will quickly snap back to the top....thus how these machines get the reputation of a "chin/teeth buster" to the non-attentive barista. While this is not a risk with the Pavoni, a good shot on the Europiccola does require significant pressure on the down stroke and may be a bit intimidating to initial users as to just how much force is needed to operate the machine.
Steve Robinson

So did this turn out like Alan Frew's famous test; "it's not the machine, dummy, it's the basket."
Top

For those who may not have read it, below is the excerpt from Up at the Sharp End that Jim is referring to:


Which in turn led me to conclude that in terms of overall shot quality, I wasn't testing machines, I was testing filter baskets! It makes a lot of sense when you consider that all the machines use the same ULKA vibe pump and have similar water distribution and shower screen setups. The only remaining variables (apart from the filters) would be pump bypass pressures and brew water temperatures, and the flushing appeared to take care of the temperature pretty well. Pressure <may> be amenable to adjustment, but I didn't try it.
...

So where does this leave the person looking to "upgrade" their espresso? Well, if all you drink are straight espressos you'd be better off keeping the Silvia and investing in different filter baskets!

Jim, thanks for the post. The point that I was trying to get to with the basket discussion was that on a Pavoni of my vintage, the basket was a weakness in the design. In the prior version it was the headache of temp and pressure control, with their dual switch setup, which resulted in them adding a new thermostat in the run that I have. In the Millennium versions following mine, you saw Pavoni address two issues....1) the weakness of the basket and 2) the temp at the group head. With regards to the basket they enlarged the group head to accommodate at 51MM basket up from 49MM and went with a deeper design. On the group head they added a channel that forces the water around the group head to help stabilize temperatures instead of having water go directly into the cylinder.

So short of updating the group head on a pre-Millennium Pavoni, using the Elektra basket is a worthy upgrade....but even that will not guarantee good shots. Being a manual machine, all things are not equal and investment in the Mano is still a worthy task.

Now it is easy to see where Alan forms his opinion. Peering down the neck of the Elektra, there is not alot between the coffee and the cup other than the dispersion screen and the basket. 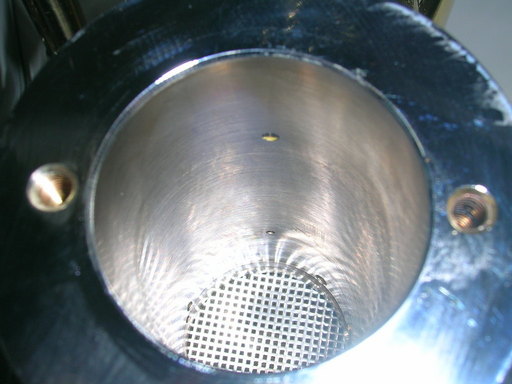 As I get into some observations about actually making coffee, I've set the stage for the differences between the Pavoni and the Elektra lever mechanisms. The Elektra has the huge spring to do the pull and the Pavoni has....well you. As you may have read from Chris' post on the Pavoni, this can be quite a task:


One thing that has become clear is that this machine is hard to use well if you are very small. You simply don't have the ability to really control the pressure when you're having to work that hard.

This got me thinking about how much pressure it actually took to get a really good pull. Since the wife was out to dinner, I figured I would stage one of those very sophisticated HB tests that women would categorize as a genetic male flaw should they observe it. I decided to do a pull using the bathroom scale.

Now for this task we place the Pavoni fully warmed and primed on the scale to get an initial reading: 11 pounds starting weight. 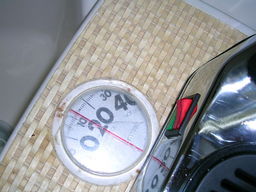 Now the fun begins to get a full pull underway, trying to maintain form and snap a decent picture: max downward thrust reading was 51 pounds for a delta of 40 pounds required for a good shot. 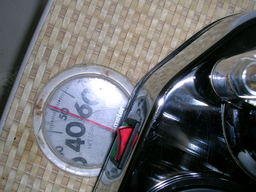 This is about as sophisticated as I am going to get on the measure, so if any engineers in the audience want to convert that to bars, please knock yourself out. (I am happy to give lever lengths, cylinder dimensions and attack angles) This could be an extra credit question is a future swag contest.

While it is a bit of work, the manual step does give you a decent amount of control over the shot with regards to speed and grind variation. It also gives you an excellent excuse for a second machine by convincing the significant other that it will part of your daily exercise program. You will have at least one killer tricep. With the Elektra design you will hardly break a sweat...cock the handle and release.
Steve Robinson

Thanks Mike, you always get unique content on HB. Now if the wife will just let me get the commercial scales for the Elektra A3 that's coming for a visit.
Steve Robinson

LMWDP #001
Top
← Back •
By accessing this site, you agree to the site's terms of service. If you need help with the site, please contact us.