.
I am a strange kind of collector... collecting Gbits of digital documents. Maybe because that's the only activity, moneywise, compatible with my hillness/passion for espresso machines. Anyway, trying to find a sense through all this data mining, I sometimes extract information that can be useful to the community.

Few years ago, following a post from Pascal, I bumped into the mystery of Gaggia numbers stamped onto the boiler. Something similar to this: 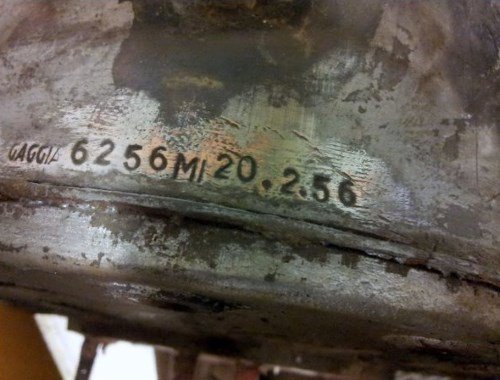 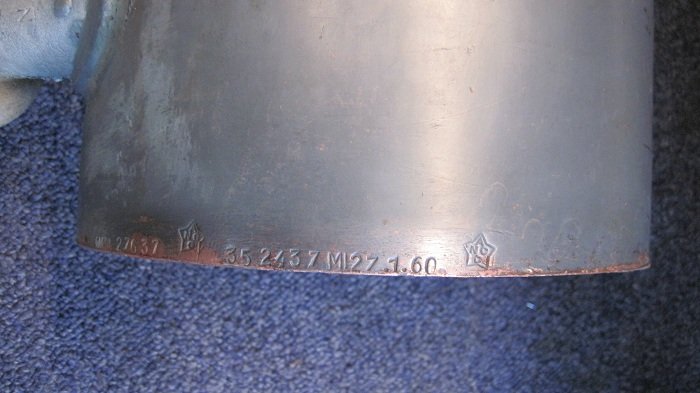 I later found lots of other numbers thanks to well-documented machine restorations from Doctor Espresso on their Facebook and others over the net (Paul Pratt, Kaffee-Netz, etc). Most of them being for Gaggias: a serial number, a date and, sometimes, another 6 digit number with two "ANCC" stars logo.

A similar numbering surfaced on an American Espress machine, and on Paul Pratt's Supervat (who also showed an ANCC badge supposedly from a President)... that lead me to some more research. I recently did the same thing with FAEMA numbers (also collecting serial, date and ANCC number) that completed the picture. 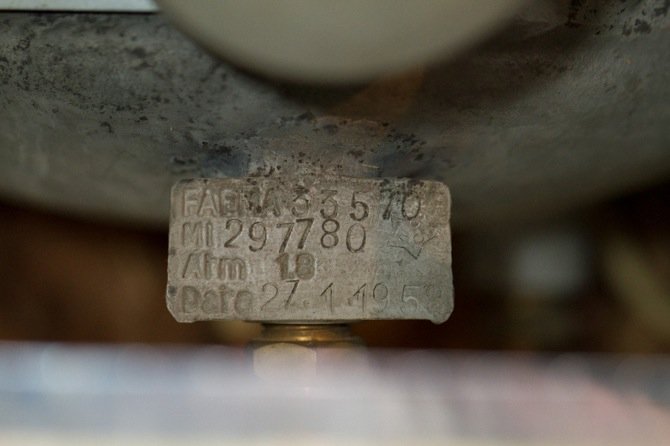 So here is time for some findings...

First, the ANCC is the «Associazione Nazionale per il Controllo della Combustione». Created in 1926, they certainly started to number all boilers (for coffee machines but also generators and motors) during the 30s. It was a way to control the production and impose a tax on every boiler produced.

The ANCC number is dependent on the town of origin (hence MI=Milano, UD=Udine, TO=Torino have their own numbering) and seems coherent between different brands.

There seem to be an ANCC number specific for espresso machine boilers, here is the graphic of all the collected ANCC numbers vs. Stamped date for Milano : 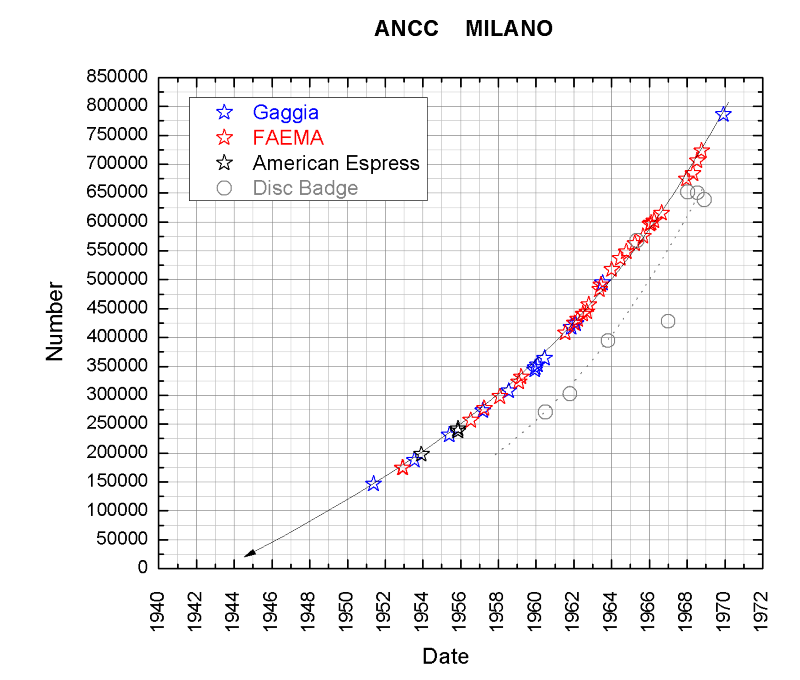 It shows that ANCC numbers is a very good way to date the espresso machines. A small extrapolation is giving ~1944 as the beginning date for this system, which is a bit far from the ANCC creation but can be explained considering delays of application and the WWII period where production was almost zero (the metal being used for other purposes).

The Star plots are for date stamped on different brands and the Discs are numbers collected on ANCC disc badges found for sale on the internet, looking like the one presented by Paul Pratt: 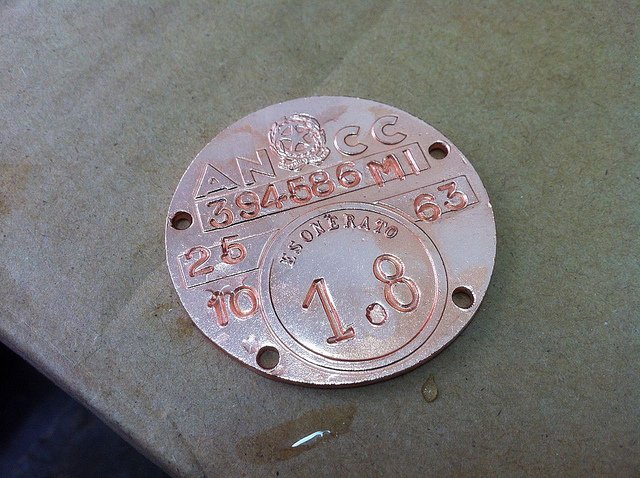 Unfortunately Paul, these tags appear to be independent from the espresso machines market (certainly from boilers of various other applications, considering the random nature of the distribution). At least for Milan, this does not imply that it was the case for Torino (where the Supervat was produced). In fact, Torino ANCC badges will also fit on that VA boiler (holes not exactly at the right place): 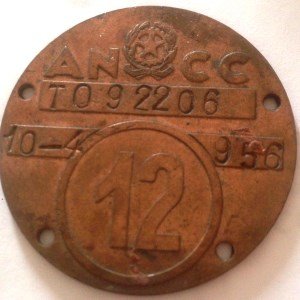 I'm inclined to believe that the ANCC number in that case is the one stamped on the badge fixations (see Udine badges below).


Other interesting information from that study concern the two major espresso brands. With stamps from Gaggia and FAEMA, it is possible to draw a precise picture of the evolution of production over time, and deduce the production starting dates.

Here is the graphic for Gaggia (ANCC and Serial together): 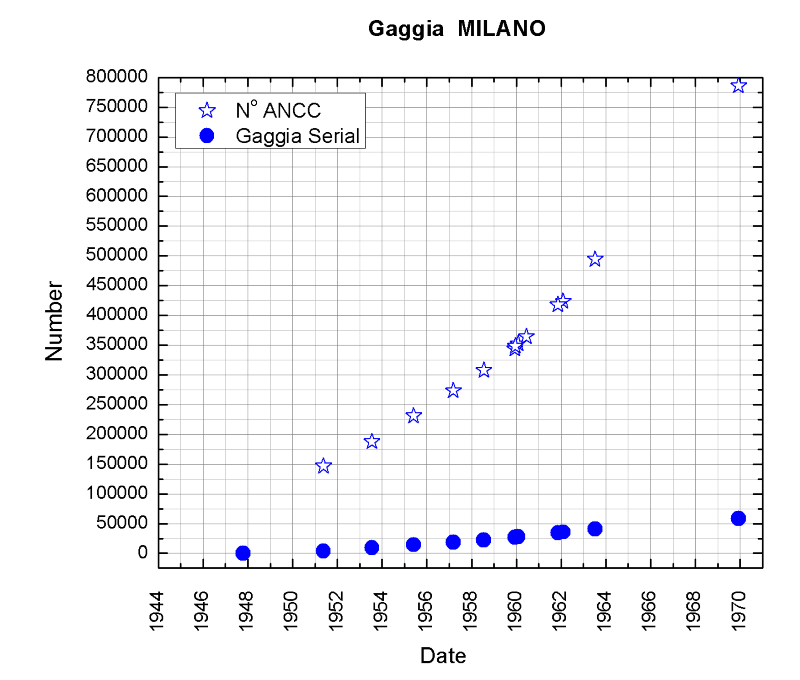 Here is the graphic for FAEMA (ANCC and Serial together): 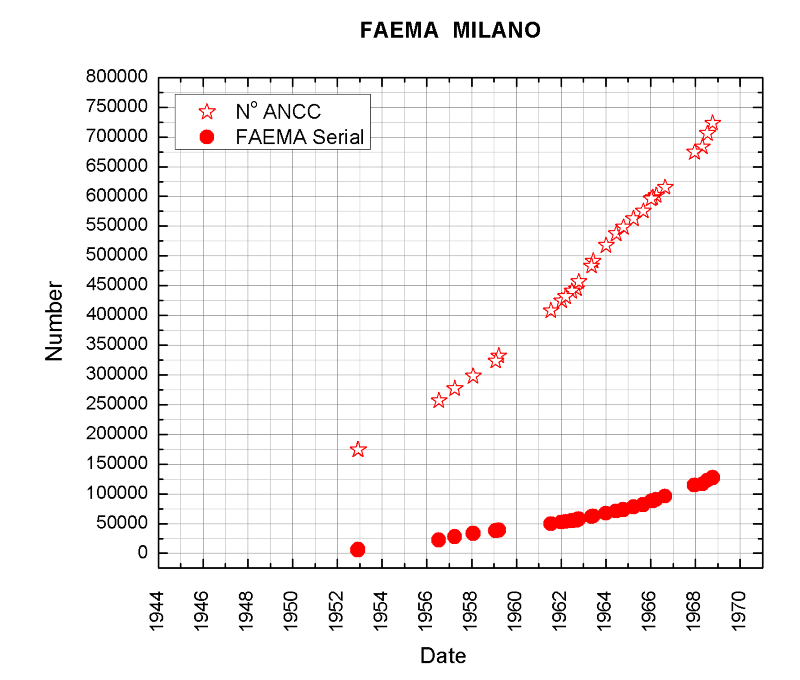 There are many different machine models in these plots (Classica, Esportazione, Internazionale, America, Orione for Gaggia / Marte, Urania, President for FAEMA) which indicate a global serial numbering for the two companies (not by model).

Now, let's compare the production pace of the two companies: 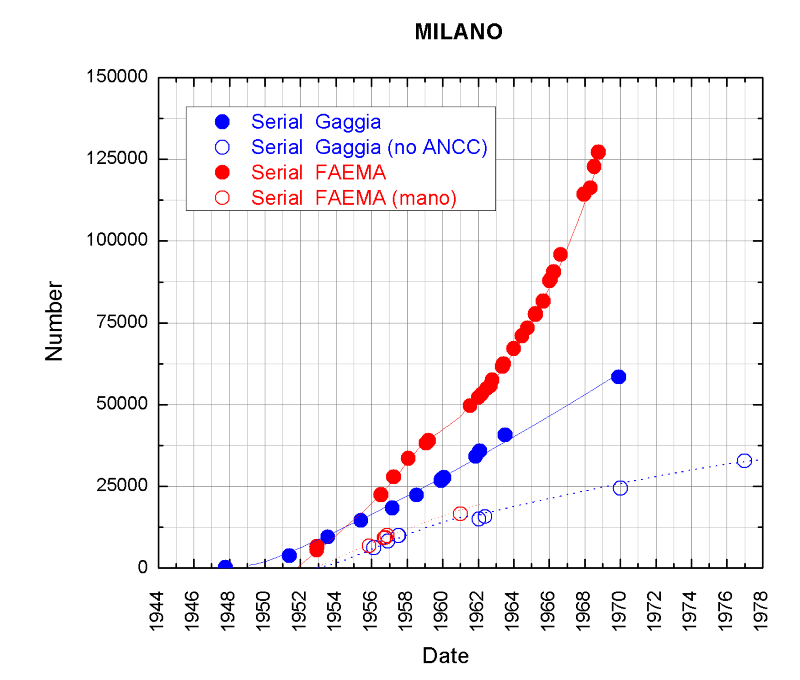 Remember the stamped Gaggia codes above ? The one without ANCC numbers are represented by circles, which follow completely an other trend. This indicate machine for exportation (not another Gaggia production site, as Monaco or Spain which started in 1952-1953... as I first thought). On the other hand, the major trend can also indicate/confirm (not so precisely) the starting date of the production. This is pretty coherent with other historical finds: 1948 for Gaggia and 1951 for FAEMA.
Very old numbers like Pascal's Classica help a lot to refine the picture, hence if you have access to a Classica or a Marte, this will be very helpful to know the stamped number.

The last graphic is also a clear picture of FAEMA becoming the world first brand with a go-for-broke strategy (especially after their e61 model, the curve is exponential). In 1967, Ernesto Valente reported $27.9 million sales to shareholders (mostly family). At the opening of that year, FAEMA celebrated their 100 000e 'Milanese' machine whereas Gaggia was only half of that.


What about it ?
Well if you like this, I need your help to go further. I'm sure there are many people having access to very old machines here. With that bit of information, I think it is possible to extend the study. I'm convinced we can apply it to other Milanese brands (La Cimbali, Snider, Pavoni) and draw this kind of graphic for other big productions sites like Torino (Victoria Arduino) or Udine... I just have to few numbers right now to get a decent plot.

In Udine, for instance, there was San Marco and La Dorio brands who shared the same ANCC system, apparently stamped on the fixation of a large medallion. 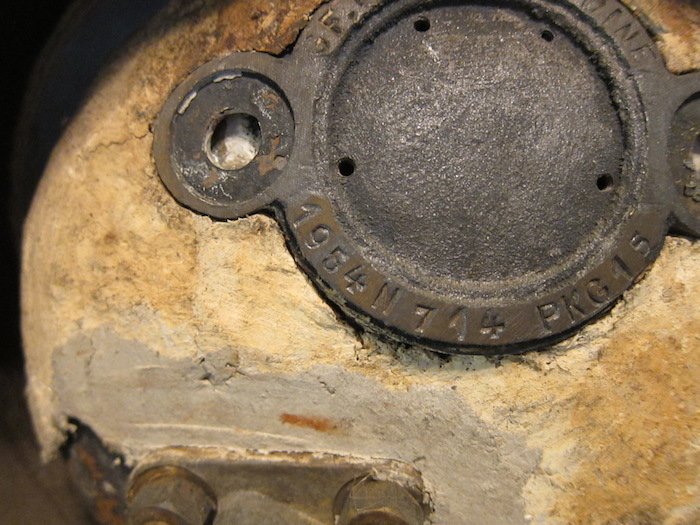 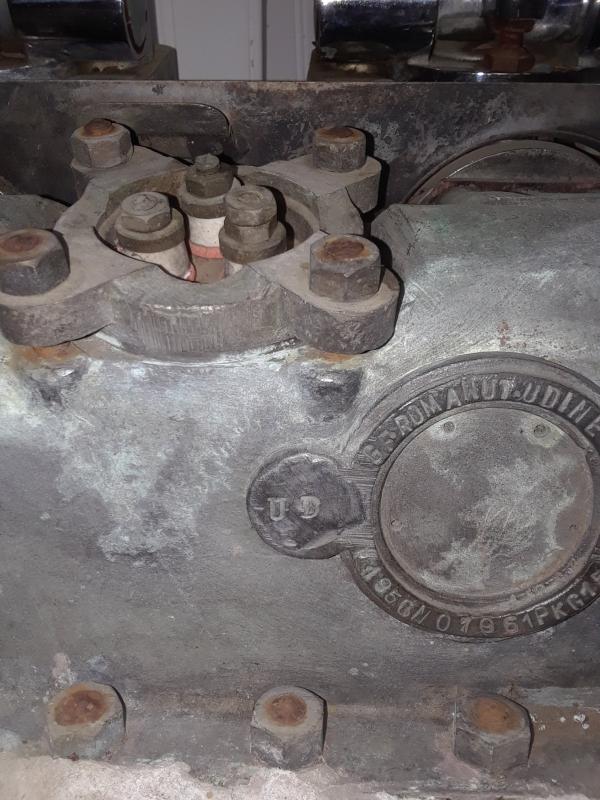 [From Mike's San Marco 52, showing also "UD" on the fixation and a missing tag?] 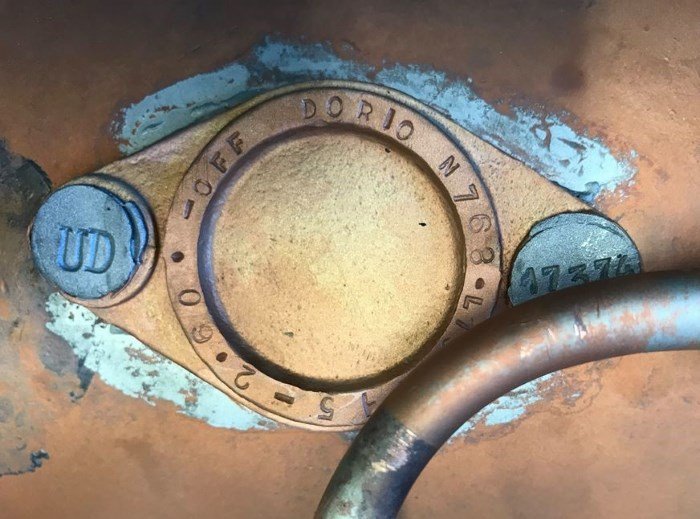 [A La Dorio badge, showing "UD" and certainly the ANCC number on the fixations]
Can somebody move that pipe away from the badge, please ?

Who's ready to collect new data for me ?

Fascinating... we just started thinking on kind of a register round here, too

Here's the only number found on the Urania/Marte I recently restored. It appears to indicate a date of June 3 1951. 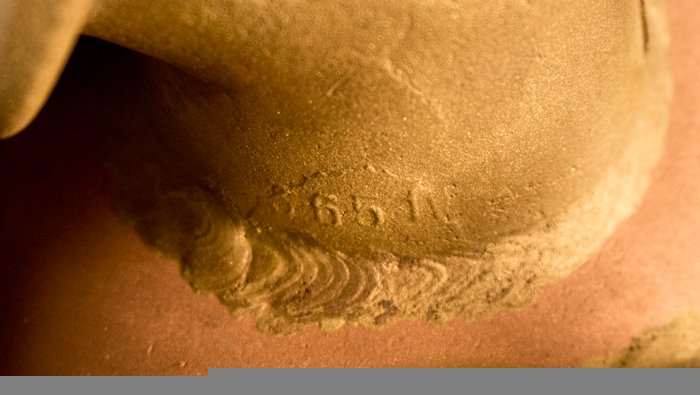 According to Dr Maltoni the machine would be a '52 or '53, leaning more towards an very early '52. The boiler and group are correct for a Marte so the '51 date would make sense, especially as the machine was originally set up for gas only.
David - LMWDP 448

I have nothing to contribute other than saying, Sabastien, this is truly amazing and impressive research.
LMWDP #514
Top

David, I think this number on the group connection is more likely the serial number (#3651), hence dating end 1951-begining 1952, the oldest FAEMA I have referenced so far. So, there was no badge or ANCC number on the boiler ? (ANCC will be more precise)
https://cafeoblog.wordpress.com/
Top

Tremendous study, Sebastien! I wonder if this numbering system applies at all to domestic machines? Here's the serial number on my 1960 Lady Duchessa version 1.1. 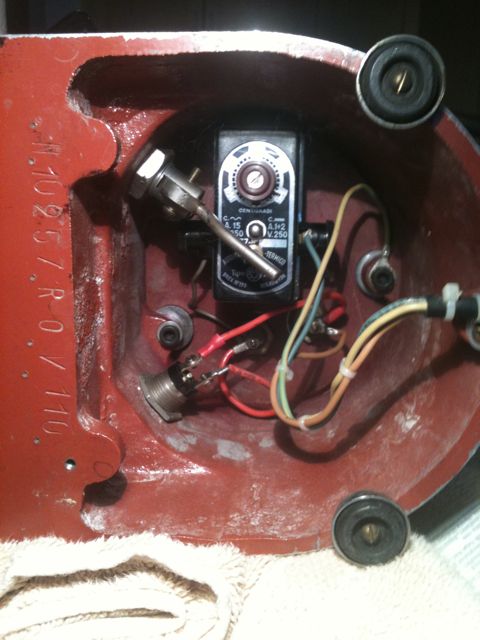 Thx Gary. I think the ANCC numbering was only for large boilers, not for domestic machines. In most cases, the serial numbers for domestic and commercial machines were separated systems.
On domestic machines, the date is sometimes stamped on the heating element. Hence, there may be a way to do that kind of correlation (serial vs. date) for some brands. The best source for that will be, of course, Francesco Ceccarelli's website.

The Lady Duchessa is certainly too rare to do that. Francesco has some serial numbers for Duchessas (10124 and 1224 for a more recent model ?)... a bit confusing. There is also something weird on yours: what "RO" means ? (Ducale was in Pavia, so it can't be "Rome").

Who said every mystery can be solved. Sometimes, it's better like that.

Who's ready to collect new data for me ?

Great study. Some time ago I did the same for Carimali Uno espressomachines (80ties/90ties), which is obviously far less ambitious (but the same principle).
Herewith registration of my Faema (double group) E61 with boiler dated 3-1-1964, ANCC code MI 517607, FAEMA serial 67129.
Not much use for expanding the statistical model, but acknowledging it....

Question, in what software did you make the graphs? SPSS? 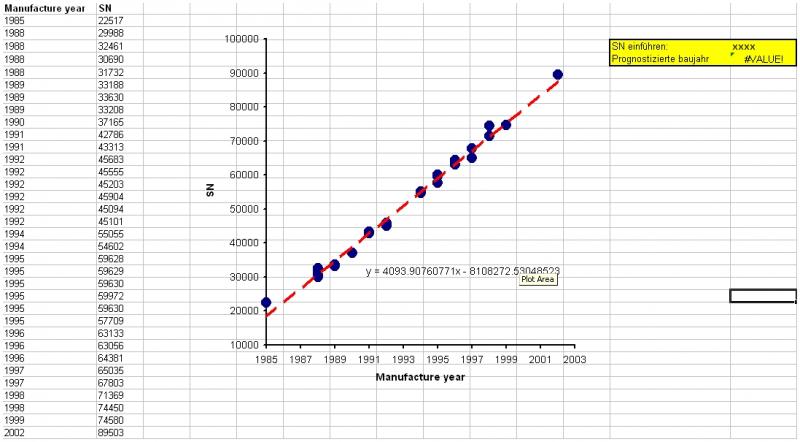 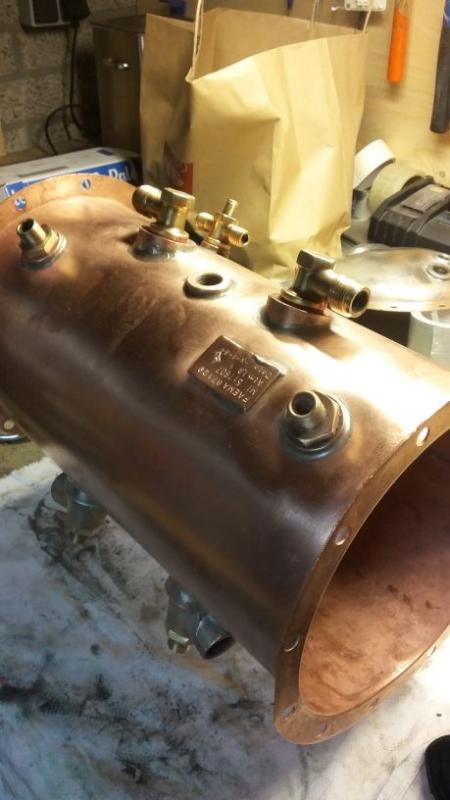 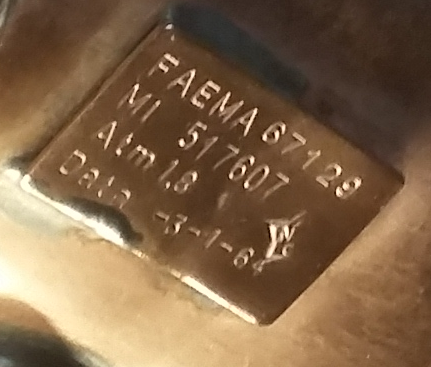 think that excel would be able to handle a graph like that, it has tons of built in formulas including stats.
LMWDP #483
Top

turboyeast wrote:Question, in what software did you make the graphs? SPSS?

Great TY. Your new point fit exactly on the curve, I don't think I had a pump machine yet.

The software I used is Origin.
https://cafeoblog.wordpress.com/
Top
← Back •
By accessing this site, you agree to the site's terms of service. If you need help with the site, please contact us.