I want to bring to light some interesting observations I have come across.

I restored an 81 Cremina last month that came with the original single and double basket.
I wanted another basket as it works well with my set up if I have two so I ordered another Cremina double basket from Cerini.
It turns out that its not the same basket. The hight is the same being 23mm but the holes are different and it has an LF stamp. It also appears to be slightly wider but not by much. It doesn't extract better then the old basket and I think it probably needs a different dose or finer grind but so far im not satisfied. I also read a previous post where someone else observed the same findings.

I was a bit frustrated so I decided to try the Elektra double basket on Amazon which is supposed to be 26mm in depth. To my surprise it was an almost duplicate of the newer Cremina double being 23mm except for one thing and that is the lip is slightly wider. I returned it and decided to order the Elektra basket from Stefano's and this one was 26mm and very different than what I received from Amazon except for the lip. The extraction was better at higher doses but overall I still preferred the original.

I then came across this thread regarding the Strietman baskets made by IMS being a good alternative once slightly modified to fit that gives a good result for this poster that was closer to the original basket.
49 mm basket comparison

I ordered one today. I then went back to the thread and noticed something that caught my eye. The Strietman IMS basket looks identical to both the new Elektra and new Cremina basket except that its shorter by about 2mm. The stamping and hole pattern is an exact match.

What does this all mean.
I have a strong suspicion that the new Cremina basket is made by IMS for LF. LF also makes almost the same basket for the Elektra except for the lip which probably fits the Elektra better. The Strietman basket is just a shorter version of both. I have also noticed that the hole size on the IMS basket appears to be slightly larger and could be why I need a finer grind.

thanks, I have read that post that compares the baskets. IMS is currently on holiday, and said they can only make a 14g basket. This is the first time I have heard this, and after stating multiple times that I'm looking for at least a 18g basket, I had also stated that we would like want packets from 14 to 22g. which is why I sent them a bottomless portafilter the first time.. When they get back I'll restart the conversation.
Top

This is all just speculation and I don't want my observations be counterproductive to your efforts as Im also interested in better baskets.

I just don't want you to get duped with them giving you the same 49mm LF basket that IMS probably makes for the new Cremina and call it a done deal unless what they call their competition baskets are a different product from what they are making for the OEM.

Some more observations. It appears the stamping and holes pattern on the Elektra basket looks identical to the stock 81 Cremina basket but it differs in three ways. The lip, the hight of the basket and the width of the bottom is slightly larger. There are also more holes. I found that it requires a high dose to extract well.

I then noticed that the stock pre millennium La Pavoni double basket from pictures looks almost identical to my OEM Cremina basket so I ordered one. I will confirm once it receive it. I have a good feeling that this will work for me and I will be happy because it has a similar pattern of holes.

It is possible that the older baskets for these machines were made by some other company.

As I mentioned in the past I have used these competition baskets for other machines with the promise of better extractions because of the precision of the holes but I found my self gravitating back to the original baskets in every case because they just tasted better. I also noticed that the IMS basket requires a finer grind and its obvious now that the holes are larger.

The IMS shower screens on the other hand are better then the factory ones because they disperse water better and do not get clogged. The also have the ability to keep in the inside of the group clean at least on my La Pavoni.

I now believe that the original basket was designed and tested to be optimum for each machine and whatever adaptation might work for a particular coffee but is less forgiving compared to the original. Therefore for my needs I want a basket that is closest to the original or exceeds it.
Top

I have a little update incase anyone is reading.
I have since tested the La Pavoni double basket earlier this week and today I have received the Strietman basket.

Here are my findings. The La Pavoni basket (LF designation) is Identical and almost exactly the same as the new Cremina basket except for the lip. It fits the group but the new type Cremina specific basket fits better. It also performs identical which is not that great compared to the original 1981 basket.

The Stietman basket looks identical to the above baskets but after measuring it is less than a 1/10 of a mm smaller width wise on the bottom. Also it is ever so slightly less wide but hard to tell unless you have a caliper. The hole size looks similar but I have no way to measure to compare. The biggest difference, its a shorter basket. I felt that I was set up for a disappointment again.

I am using about 14-15gm depending on the roast in the original basket and it was extracting well. Since the Stietman basket is shorter I decided to use 1 gram less. What do you know, the guy that posted the comparison on baskets was absolutely right. This basket actually extracted as good the original basket which I was praying for. I thought the taste of the coffee was going to be milder but that wasn't the case at all. The Stietman basket pulled a tastier and richer shot out of all the baskets that I tried.

What have a learned. You cant judge a basket by the way it looks. It has left me a little more perplexed but I don't care at this point because I have found a basket that comes close to the original and possibly exceeds it.
Top

I received the 18gm Strietman basket today and made some interesting comparisons with the MCAL version. 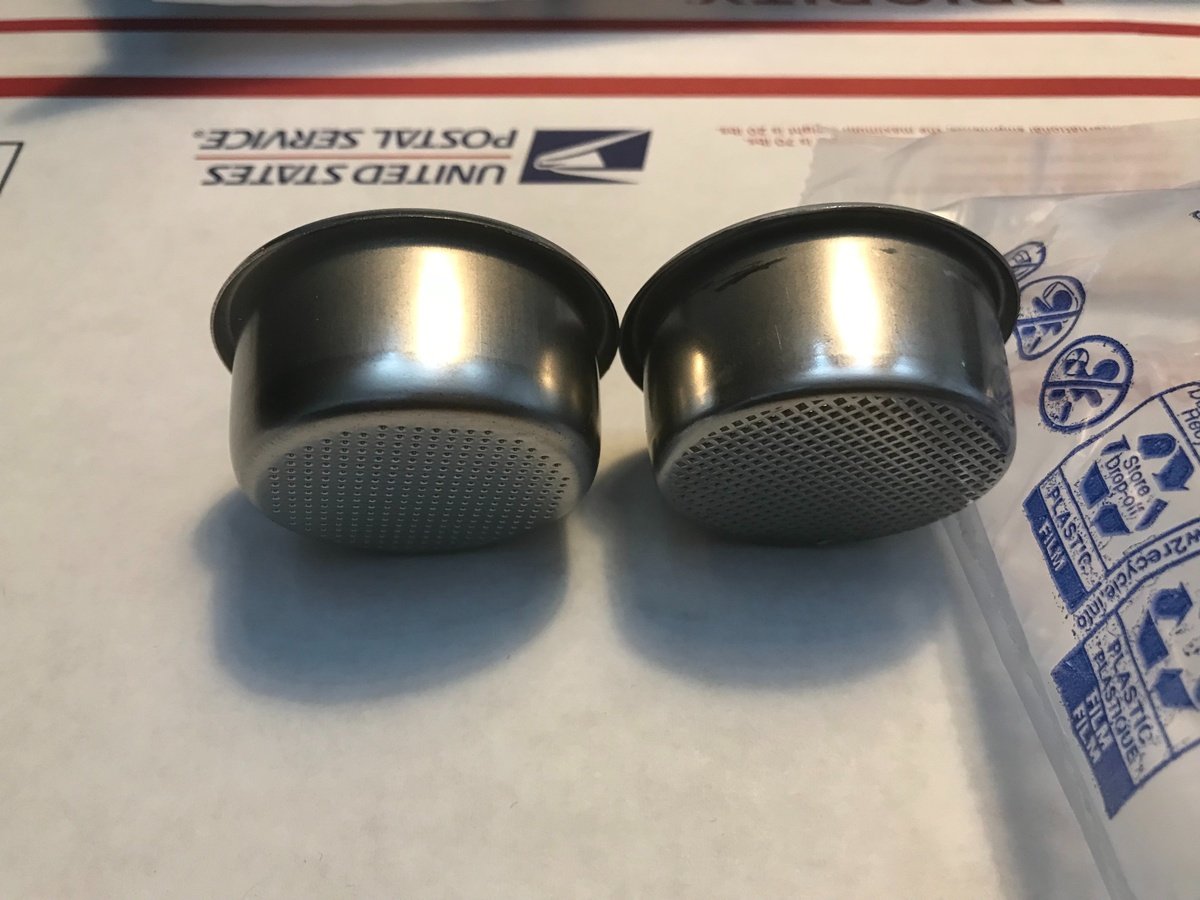 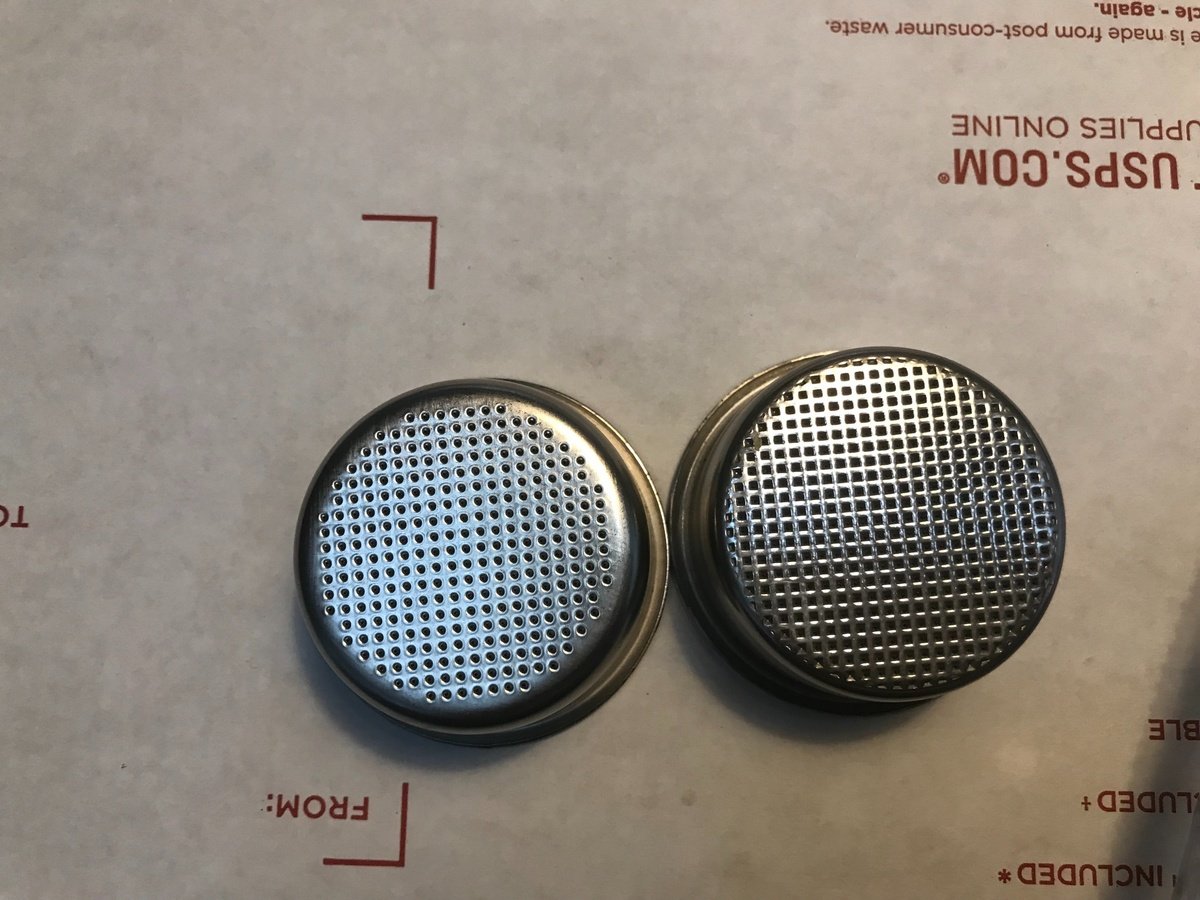 The MCAl basket depth is 24.9 mm measured from the inside.
The Strietman basket measures 25.29mm.

It would seem its a touch deeper then the MCAL. It fits the Cremina portafilter and just like the the smaller version but it requires you to rock the portafilter in from front to back and it fits in nicely.

If you want more volume and more dose this is the basket. It works much better then the MCAL which was inconsistent and channeled unless it was full.

The Strietman baskets look identical to the new Cremina, new MCAL and new LP double baskets that are marked LF except for the size but they certainly don't extract like the Strietman. It makes me think that the holes on these baskets are better quality. My extractions with these baskets are far more even and its taste better in the cup.

One other thing to note is that the extraction is not effected by having too much headspace by using less coffee.
Top

Just stumbled upon this and I have the Strietman baskets on the way! How's it been coming?
Top

I have been enjoying the baskets. Actually the smaller Strietman is doing it for me right now with a dose of 13-14gm of dark roasted beans. Because it extracts well I feel that the shot is actually more concentrated not to be confused with strong or harsh, just punchy goodness.
Top

Dev- how much is your output from 14gram dose?
Top

Dev wrote:I have been enjoying the baskets. Actually the smaller Strietman is doing it for me right now with a dose of 13-14gm of dark roasted beans. Because it extracts well I feel that the shot is actually more concentrated not to be confused with strong or harsh, just punchy goodness.

I ordered both. Tend to use lighter roasts so wasn't sure if I'd be doing 15-ish on the smaller or try for bigger shots.

Have you tried replacing with the Strietman Shower Screen from IMS as well?
Top

Dev- how much is your output from 14gram dose?

I haven't weighed it but I imagine its a less than the stock basket but I believe since the shots are extracting so well it tastes more fulfilling than the other baskets. The only basket that comes close is the original 1981 Cremina basket.

The big Strietman can be very useful also since it can extract the same dose as the small Strietman with the extra headroom and you can get a bit more volume if you desire. I think these two different sized can work harmony depending on the coffee used but I haven't spent as much time on the bigger one and I think I should just to change things up.

Here is another interesting tip bit from my research, it would appear that the deeper Strietman is not out of the ordinary for the Cremina. Apparently some of the earlier versions of the Cremina came with baskets as deep as the Strietman although Im sure they are different in other ways but interesting none the less.
Top
← Back •
By accessing this site, you agree to the site's terms of service. If you need help with the site, please contact us.