Often Commercial Lever machines are designed to be very temp stable (with varying degrees of effectiveness) yet they don't always provide a convenient way to modify shot temperature. There are many different ways in a "commercial" lever that the brew temperature is regulated, so a variety of techniques can be used to raise or lower the brew temp to your liking. This article is an attempt to list some of those ways for those struggling to find a way to manage their brew temperature in a manner that suits their preferred routine.

I suggest, to facilitate your adventure and to learn better how your machine behaves, to use some sort of rather accurate temperature measuring device while playing with these techniques. Some options are: 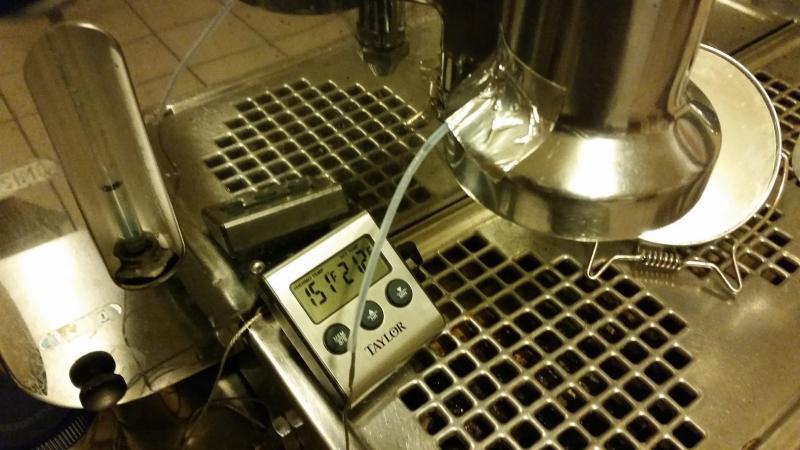 On The Fly Temperature Management
Without modifications to the operating parameters of the machine temperature management on these machines becomes an interesting game of modifying the group temp right before pulling a shot to get the desired results:
You can cool the group a few degrees by locking in a cold portafilter for a minute or so before the shot. If you have an extra couple double spout portafilters you normally don't use for anything locking a cool one in during your prep between shots is a very convenient and effective way to keep a group that likes to overheat from going out of control.
A disadvantage though is that if you forget to lock in the portafilter before prepping the shot you either have to pull it hot, wait around for a minute or two for the portafilter to pull enough heat out of the group, or use another technique to cool the group quicker.
You can cool the group with a cool wet towel a or small fan: Oops, I forgot to cool the group during my prep and now I have a prepared basket and a group that's too hot. I can use one of these techniques to cool the group in a more rapid fashion.
You can cool the group by putting a bowl of water under it and pulling down on the lever a bit to suck up water into the group. This is a very effective way to cool the group almost immediately. It also has an extra bonus of helping clean the dispersion screen of caked on coffee grounds. It can be too effective however and you can drop the temp too far in a hurry. It can also get kind of messy if you aren't careful.
You can flush right before the shot: On most levers this will be a "cooling" flush to cool the water to the right temp; however on some machines such as open thermosiphon styles, you raise the temp of the group a few degrees by flushing right before the shot.
You can use a pinhole blind disk to get the group up to temp quicker: Levers tend to get hotter when pulling shot after shot without letting them recover. If you have a group that is too cold and you want to speed up the wait, you can pull some "blank" shots through a scace or some other device which regulates the flow to simulate puck resistance. You waste a little bit of water but it can shave a ton of time off of the "warm up" time in the morning. Popular DIY versions involve poking small holes in blind baskets or blind disks.

Advantages to these methods are that they are flexible, meaning you can change the desired temp easily shot per shot; and you don't need to make any modifications to the machine (although you may need extra portafilters laying around);

Another less popular but also effective way is to change the ambient temperature of the room the machine is in. Those big lever heads are simply heat sinks; a colder room will cause the groups to run cooler; a hotter room will cause them to run hotter. If you don't mind changing the temperature of your room this may be a great option as it doesn't have so many side effects except for possibly the need to wear a hat and scarf every time you make espresso. I have had the opposite problem where due to the location of my machine sometimes the room it was housed in was in the low '50s (farenheit) I had to put a space heater 3 feet in front of the machine and turn it on when the machine turned on to get the ambient temperature around the groups to the proper temp to pull shots at a high enough temp.

NB: f you have a two group machine like me, the above two "resting temperature changers" affect both groups. It may be desirable to change the behavior of just one.

Great summary. I use a thermocouple and digital thermometer, along with portafilters for cooling the group. (I also have a small fan to switch on when I am in a hurry.) I find this procedure produces repeatable results with a minimum of fuss.

Dominico, a very thorough discussion. Thanks!

Seems to me that if you're running multiple shots (say, for guests) and you want a quick take on the state of the grouphead's temperature, an infrared thermometer is invaluable. I take it the strip of electrical tape is to provide it a non-reflective surface for more accurate readings? Although electrical tape is probably OK for limited heat resistance, I have to think there's something better in terms of function as well as form, but offhand I'm not coming up with what that would be.
- John

I found black masking tape on Amazon. It looks similar to electrical tape but it has a weaker adhesive and is not reflective whatsoever; better for ir measurements and won't goo up the group like electrical tape would. It isn't the prettiest though, you still have these black strip of tape on your group, I do what I can to not put the directly in line of sight while I am using them.
http://bit.ly/29dgjDW
Il caffè è un piacere, se non è buono che piacere è?
Top

If you haven't seen it, Dominick simultaneously posted a fascinating thread on pressure profiling. It's here:

Thanks Dominick for starting these two threads! I know, primarily from the very consistent shots I've had from Acme at their cafe in Seaside CA that were pulled by Chris on their 3-G Astoria, shots can be pulled to identical or near identical flavor profiles in back-to-back succession on a lever; being able to alternate shots on their 3-group Astoria lever, in addition to Chris' superb barista abilities, certainly lend to the consistent results.

But to be honest it has, outside of my pour over devices (EspressoForge, Caravel, Portaspresso, etc.), been a challenge for me to get back-to-back consistency (bulls eye level...) without undue time between shots. Quite possibly my expectations trump reality as it relates to prosumer single group lever

Looking forward to the discussion in here

dominico wrote:You can flush right before the shot: On most levers this will be a "cooling" flush to cool the water to the right temp; however on some machines such as open thermosiphon styles, you raise the temp of the group a few degrees by flushing right before the shot.

The Bosco's hybrid dipper design falls into this group. With a 1.2 bar p'stat setting & a room temp in the 72°-75°F range each second of a flush after an idle period will raise your peak shot water temp approximately 2°F from the idle temp of 198°-199°F. The flush is done just before you start your shot prep as opposed to just before pulling the shot.
LMWDP 267
Top

John, what's your routine on the Bosco when you're pulling, say, 4-6 shots in a row?
- John

On my new-style CMA dipper group, the incoming flow rate can be adjusted. I haven't found it to have much impact on temperature or taste.

Balthazar_B wrote:John, what's your routine on the Bosco when you're pulling, say, 4-6 shots in a row?

Never had to make that many shots in a row. If I did my routine would be to use my Speedster & the Bosco.

From Scace testing the Bosco simulating a shot every 2 minutes the group water temp would increase 1°F per shot. You can work around this by leaving the PF off/rinsing it with cold water/ect. Haven't played with that much except during testing as it's not something that I have to worry about.
LMWDP 267
Top
← Back
By accessing this site, you agree to the site's terms of service. If you need help with the site, please contact us.