So after months of trying i'm coming to this forum, hat in hand, to see if you guys could possibly help me out. A few years ago my father gave me his 1974 La Pavoni Europiccola which had fallen into a state of disrepair. He had ordered a full rebuild kit but apparently lacked the will do actually rebuild it. So i gladly accepted his gift, rebuilt it, used it a few times to get familiar with it and it promptly sat on a shelf with only minimal use after that. I simply lacked the time due to work to make espresso a part of my daily routine. Enter COVID, working from home and another full rebuild of the Pavoni and i'm now pulling twice daily shots on it.

Dialing in the shots took some learning but i'm now comfortably making good espresso and am just "playing" now with different coffees and experimenting. Which is to say, when it comes to pulling shots i'm now comfortable with the machine. Steaming milk...not so much. I've watched every youtube video out there, tried every conceivable steam wand position, rebuilt said steam wand and generally run out of ideas. The problem i run into is that the foam is simply too airy to pour latte art. If i stretch the milk less, there's basically no foam at all.

I purchased a thermometer thinking that might help; nope. Rebuilt the steam wand and internals? Still no dice. Basically i can only produce (admittedly nice) cappuccinos or espresso with hot milk. Lattes just don't seem to want to happen. I'm also using a single hole tip on the steam wand. I tried the original three hole wand but it was much, much worse. The problem for me is that these early La Pavoni's have the steam wand so close to the group that i feel like i can't get an optimum position for the steam wand in the pitcher. I'm using a small (i think 12oz) pitcher and filling it up about half way so that i can pour the entire contents into my 8oz cup.

I'm hoping someone with an early model Pavoni can help me out with this. I can't find any videos on the internet of someone steaming milk with the older steam wands that are crammed up next to the group. I can provide pictures of what i'm getting if that helps and also answer any questions people might have. I do have a pressure gauge on the Pavoni (it's only modification which was done to ensure it doesn't turn into a pipe bomb) and it's getting proper pressure once it's warm (just under 1 bar.)

Any thoughts, comments or suggestions are much appreciated!
Top

I've had good luck with the 350ml pitcher and one hole tip. Make sure you purge the wand and start steaming when the boiler is on. Keep the tip close to the edge (left) of the pitcher and also pretty much on the surface of the milk. Ice cold pitcher and very cold milk. That's what I do anyway and can even pour tulips and stuff. Good luck!

I have a millennium pro but it should be the same thing.
Osku
Top

Thanks for the reply. I do purge the wand and keep the boiler on the whole time (at the highest setting.) Also i put the milk in the pitcher and in the fridge prior when the machine is heating up so that both are very cold when i start. Does the millennium pro have the steam wand right next to the group? Mine is a pre-millennium so there's only roughly an inch of clearance between the wand and the group. I love the design aesthetically but i really hate it functionally.
Top

It's so close that if it drips it drips on the side of the base. But while steaming I position the tip so close to the left edge of the pitcher that it doesn't really matter.
Osku
Top

Here's an iCloud link (lemme know if it doesn't work) to an old video of me steaming on my 1982 dual switch Europiccola with the original 3-hole tip, and another video of me swirling the steamed milk so you can see the texture.

Thanks evan i'll check out the vid and tomorrow i'll try to get a video of me steaming some milk and then pouring it to give you an idea of what i'm getting. Honestly it went from a fun challenge to a little maddening so any critiques will be greatly appreciated.
Top

Chris Baca's video is shared on a number of threads on this website over in Tips & Techniques.

There is a link to it in post #2 here:
What's your steaming technique with Quickmill Vetrano 2B EVO?

The La Pavoni makes great foam. I am in the camp that believes the smaller pitcher helps get a faster swirl because the steam power of the machine is lower.
Top

I found this video to be very helpful...

This video is me steaming non-fat milk with my 74 LP...I'm using a single hole top from Creativewerks.

Thanks for all the responses! All the videos worked (i had seen chris baca's before actually) and i noticed that my steam wand might actually be the reason i'm not able to get microfoam. I'll post some pictures of it. I don't think i'm able to get the correct angle because of the group and the little overflow pipe. Does anyone else have this style wand on their la pavoni?
Top 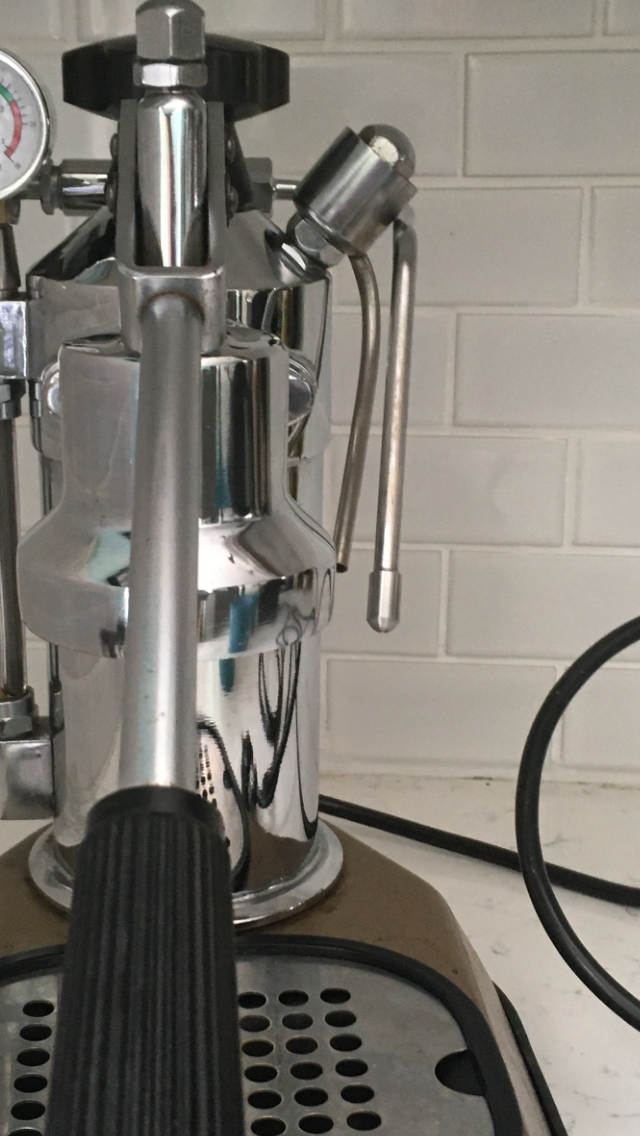