Building a lever machine.... from scratch 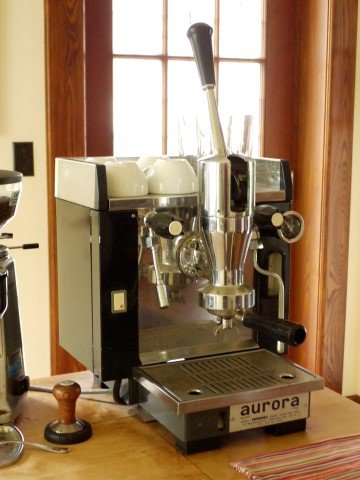 One particularly cold February morning, I got up to discover that the auto-fill circuit on my Brugnetti Aurora had failed. As I opened up the Gicar controller a few days-without-proper-morning-coffee later to figure out what was wrong (an old and faded capacitor), I realized that I had now either fixed or maintained every system on the machine except the lever group. So I took that apart too and replaced the spring and the gaskets. As I was putting it back together I started wondering about what it would take, given that the original Brugnetti company no longer exists, to make more of these fantastic machines.

A few days ago, after nearly three months of research, drawing, discussion and negotiation, I received these photos: 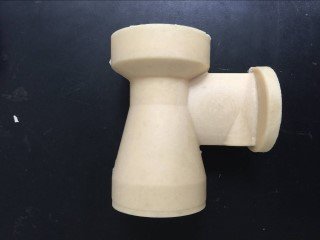 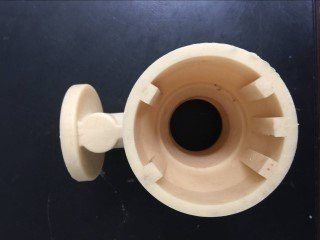 ... a wax positive of the group body which, over the next few days, is going to be encased in plaster and replaced with molten brass.

The photos are also a sign, at least to me, that this project is now well and truly underway and that it is time to share it with the generous people on this forum, whose advice I have greatly benefited from since my obsession with coffee began. I am a long, long way from a working machine, but you have to start somewhere.

Can you provide more details on the intended design? I look forward to watching this progress!
Top

#d.e.m. - I came across your excellent project while on my travels.
That is a great machine you made.

The goal of this project is to build an 'update' to the aurora, which is my favourite vintage single group machine.
There are several variants of the aurora, at least four that I know of, which were imported to in North America by various resellers. I am lucky enough to have two of them. The one in the picture in my first post was made in Milan and imported to Canada. The one below, with a different boiler and HX, was restored by Orphan Espresso. I believe that it was assembled and sold in the US by Termozona, a company from Connecticut, who added the "Europa" branding. I'm not sure how much of the case of the Europa is original, but the design and build quality on the European import are better. 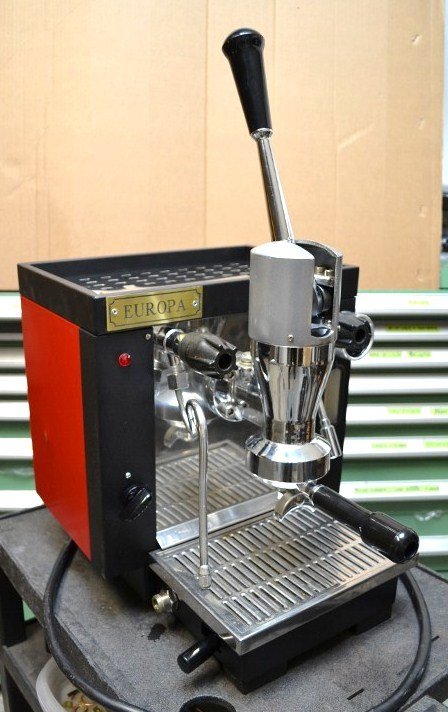 Dividing the machine into its component assemblies, the plan at the moment is as follows:

Group - everything that I have read about this group is positive. The main casting contains over 7lbs of brass and consequently has plenty of thermal mass to maintain temperature stability. It makes a killer shot and I prefer its aesthetic qualities over other lever designs I have seen. Consequently, this, apart from a change in a few of the materials for reasons that I will go into later, will remain faithful to the original design. As this part of the project is the most difficult, this is where I am starting.

Boiler - after the group, the boiler is, imho, the most important part of the design as it determines how well the whole machine performs. Here again, I want to stay true to the original design while benefitting as much as possible from the performance improvements that are offered by contemporary control electronics. So, much as I like the project that EspressoForge is leading that pairs an Ascasa Thermoblock with a lever group, I am going with an old school boiler and heating element, with an HX.

Control - this is the area where there is the most room for improvement over the original design which, depending on whether it is an autofill variant or not, uses a Gicar and Sirai pressurestat. This last is a rather blunt instrument with a deadband, when it is new, of around 0.2bar (considerably wider when the diaphragm of the stat gets old). Although I may start with a pressurestat as it will work "off-the-shelf", ultimately the control will be handled with some flavour of micro-processor which will drive the element using an SSR. A starting point for this may well be EspressoForge's combination of the arduino + TC4.

Sight gauge - not currently planned. The sight gauge adds a lot of complexity to the plumbing and the case design which would be eliminated by providing feedback from the water-level sensor with an LED.

Case and chassis - with the goal of making a commercial quality machine that can live on the counter top in the kitchen, I am going to try to slim down the profile and footprint a little while remaining faithful to the styling. The drip tray and sump designs also have room for improvement.
https://lapera.ca
Top

I have a Brugnetti Aurora myself - it's also my favourite and the most satisfying machine among so many!

Since you're planning to cast a new group, have you thought about adding slots for active heating in the grouphead(ie. cartridge heater)? This helps the warm up process and temperature control. I have a stick-on silicone band heater and it makes it more home-friendly for me.

My Aurora only has a manual fill lever and no autofill. But it's the simplicity that attracts me. The manual fill can be used to completely drain the boiler because there's no one-way valve and the flow can be reversed by simple opening the valve (something that I do every month or so - an easy two-minute job to keep the boiler scale/crud-free). There's nothing much to fail even in another 20 years with the manual fill(well change a rubber gasket or two).

But if it is to be left on 24/7, the autofill will be important.

Good luck with your endeavor and I will be following your work with interest!


My favourite view first thing in the morning 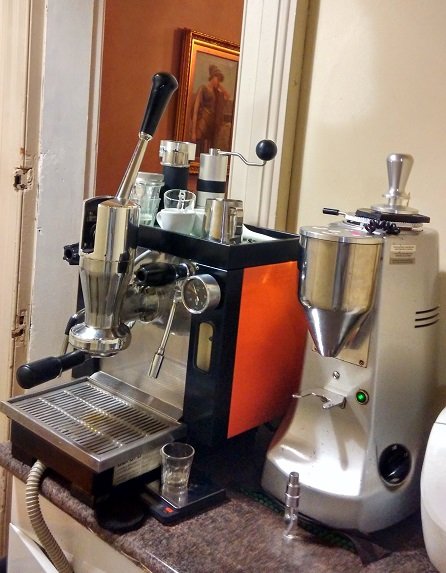 How about adding a spot in the group to tap a pressure gauge?

samuellaw - That is a nice machine. From the pressure gauge and detailing of the trim around the warming tray, it looks like one of the Europa versions. Do you have any pictures of the inside?

I agree that the manual fill does have certain advantages, especially as it makes the machine incredibly simple - the relay in the pressurestat being the only electric part if you don't count the element. However, it is risky in situations where the machine is used by anyone other than someone who understands it. As there is no fail-safe, it is all too easy for someone who doesn't understand the machine to wreak it. I also prefer to leave the machines on 24/7 as that is what they are designed for. The thermal expansion as the machine heats from ambient to brew temperature is hard on the seals. However, this means that one small steam leak while the machine is unattended overnight could lead to failure.

I've thought a bit about adding cartridge heaters to the group, but I haven't come to any conclusions yet. Not only would it bring the group up to temperature more quickly, it would also allow finer control of group set point itself with a PID loop. The question for me is where to put them? As you can see in the drawing, there actually isn't a great deal of material in the cylindrical part of the body. The one place you could put one is in bottom of the neck - the section that connections the cylindrical body to the flange that bolts to the boiler. This would have the added advantage of keeping the wiring for the cartridge neatly tucked away - which is another consideration. 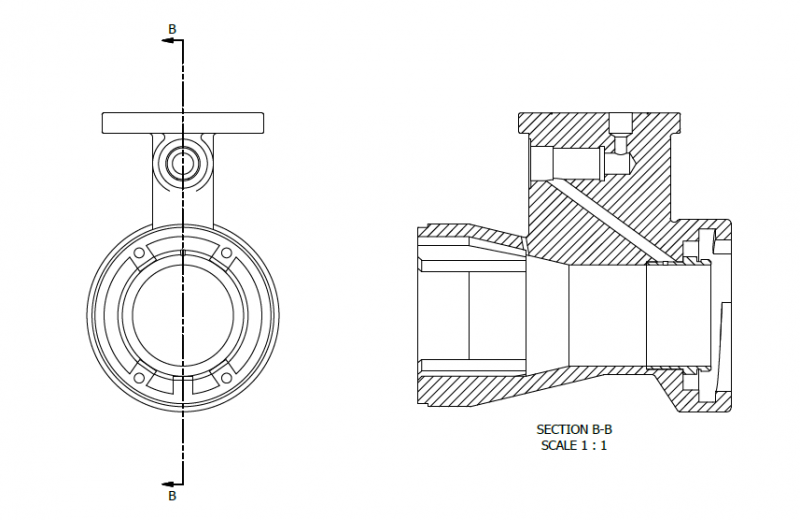 Once the rough casting comes out of the investment at the foundry it will undergo various machining processes to bring it to its finished state. Removing material at this point is the only option. Adding material to make room elsewhere for a cartridge heater will obviously involve changes to the mold.
https://lapera.ca
Top

dominico - tapping a hole in the side of the neck to the channel that leads from the check-valve to the chamber should be possible. This would indeed give a reading of the pressure during the pull. However, (and I'll admit that I'm mildly fuzzy on the physics here) given that the same spring is always used to generate the pressure, only the flow rate will change (i.e. the time it takes to pull the shot) as the grind/puck size/tamping force are varied. The pressure reading would then only tell how well the spring is performing.
https://lapera.ca
Top

Also, some of us (like me) like to either help or retard the spring a tad under certain conditions, such as to get a desired flow or to do preinfusion pressure manipulations.

Wherever the tap is, it should be ideally at or below the point where the piston bottoms out at the end of the shot.
http://bit.ly/29dgjDW
Il caffè è un piacere, se non è buono che piacere è?
Top

What a nice project and you apparently have the tools and education to pull it off, no pun intended

Kudos!
That Light at the End of the Tunnel is actually a train
Top

Lol - While the Bernoulli equation can be used to calculate the aerodynamic lift of an airfoil it has more important applications in the study of the fluid dynamics of coffee! This is especially true at Nasa, which makes a lot of sense if you think about it as I bet they drink a lot of coffee.

I agree that the flow restriction caused by the puck will have some effect on the pressure, however, because the fluid velocity is so low, I suspect that the dynamic pressure component in the system is very small compared to the static part. Thus changes that affect the flow velocity (tamp, grind etc) are likely to have a negligible impact.

The trapped air pocket is an interesting thought. Do you not think that the air in the chamber would be expelled through the puck by the pressure from the service line ?

As for changing the pressure profile by lending the spring a hand (rendering your lever "semi-manual") - there you have me. I don't know that much about manual lever machines, are there many out there with a pressure gauge for monitoring the pull?
https://lapera.ca
Top
← Back •
By accessing this site, you agree to the site's terms of service.