another_jim wrote:I'm currently experimenting on the Presso -- the minimalist pour over espresso machine. It does 9 bar, and with enough pouring over, 92C shots. Unfortunately, they screwed up, and the cylinder contains more than the piston and shower screen at the bottom. At the bottom of the cylinder's travel, it also contains 3 fluid ounces of compressed air. One pumps like on a bicycle pump, and eventually the coffee pfffffffts out, alas with a pathetic white crema. They recommend using french press grind with it, probably after it dawned on them how many times you have to pump to compress the air to 9 bar. I've played with overdosing the water, but this dilutes the shot in the preinfuse. A compromise gets a reddish crema that's a few millmeters thin and lasts a few seconds. Pity.

However, beside this defect, the machine is built well enough to deserve attention (when's the last time an espresso machine came with a lifetime warranty?). I'm going to buy a few rubber stoppers tomorrow and see if I can fill up the air gap in the cylinder. It would be a gas (literally in this case) to get a godshot out of a $100 pourover espresso machine.

Jim, I looked at their web-site today and that looks like a cool little machine. I think it started as a UK machine and is now carried by All-Clad in the US. You will have to do a write up on that one if you get it tuned up. For $100 I can spread my LMWDP (Lever Machine World Domination Plot) to the masses.

And thanks to your fine support of this thread, I grant you LMWDP member number #004. Feel free to add this to your signature line.
Steve Robinson

srobinson wrote:And thanks to your fine support of this thread, I grant you LMWDP member number #004. Feel free to add this to your signature line.

Thanks. We've yet to see if I deserve it. A 2 by 2 inch cylinder of extra virgin teflon arrived from McMasters-Carr on Friday, and I've been whittling it to fit the gap in the cylinder (a neoprene cylinder would have been easier to work; who knew Teflon has about the same properties as a hardwood?)

It'll be ready for a new showdown with my current "ultra-light" lever machine, a La Peppina, tomorrow. Pics and blow by blow account to follow.
Top

Jim, this sounds facinating. I think the LMWDP will have to invest in a CNC machine to start making us some custom billet pieces if you keep this up. You have me now looking at pressos on Ebay. May join you in playing around with these.
Steve Robinson

I don't know how serious you two are about the Presso, but I bet Lino Verna of bottomless portafilter fame would make short work of such a modification.
Dan Kehn
Top

Me doing the mod is a definitive proof of concept. I'm the the world's worst fabricator (in most countries, there're laws against people at my klutziness level being near tools); so if I can make it work, anyone can. In any case; I've whittled the plug, and glued it into the gap in the piston. Tomorrow it'll be cured, and I can see if it works.
Top

The ratio of Presso's lever mechanism is only about 1:3, so one pound on each handle roughly equals six pound on the piston.

I've had my PRESSO modified few months ago. The friend, who helped machine the kit for me, also made his home-made non-boiler espresso machine thereafter.

The biggest problem of these non-boiler espresso machine is the temperature(quite stable but not high enough). Besides, the shower screen(of presso) is so high that the water drops may just ruin the surface of the coffee cake if you underdose.

Btw, I don't think the single basket of my Europiccola(millennium model) is a joke. Now I almost drink singles exclusively.
You've been perfecting your technique for a long time...... So have I.
Top

Here it is, the HB World Scoop Mini-Review (my gosh, we are heading down market!).

A goshshot is not quite a godshot. The machine is a $99.95 Presso + $9.21 virgin PTFE cylinder (courtesy McMasters-Carr, "everything the lunatic tinkerer needs") not so expertly custom whittled, filed, sawed, and cursed to measure by me. It produces the usual skimpy lever machine crema, especially for those spoiled by naked pfs, but it also gets that nice clear lever taste. In terms of espresso quality per buck or pound, this one may set the record. As a 4lb pourover design, it is also eminently travel ready. A Turkish Zass would complete this no-tech, light weight setup.

The stock Presso is an impressive looking machine for $100.
- A one piece cast aluminum group and body, 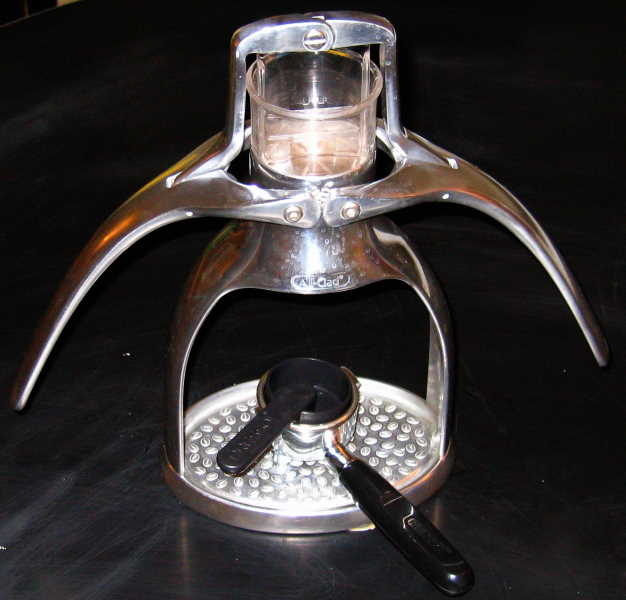 - a nice, moderately heavy chromed brass 53mm PF (about like the Solis or Saeco ones in terms of heft and size).
- A clever single disk neoprene or silicone showerscreen and group gasket.
- And finally a really clever way to get the water in and out of the cylinder. The pistons's sealing gasket rolls up and down between two ridges as one pushes down or pulls up on the piston. As it rolls down on the up-pull, it unblocks some passage that allow water to enter or escape from the cylinder, as it rolls up on the down stroke, it seals the passages. The neat thing about this arrangement is that there's no PF sneeze; as one lets go of the lever at the end of the shot, the pressure forces the piston up slightly, opens the passage, and allows the pressure to vent, just like a threeway valve does. 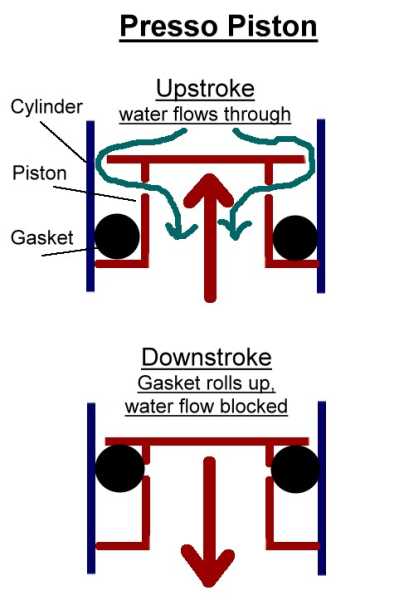 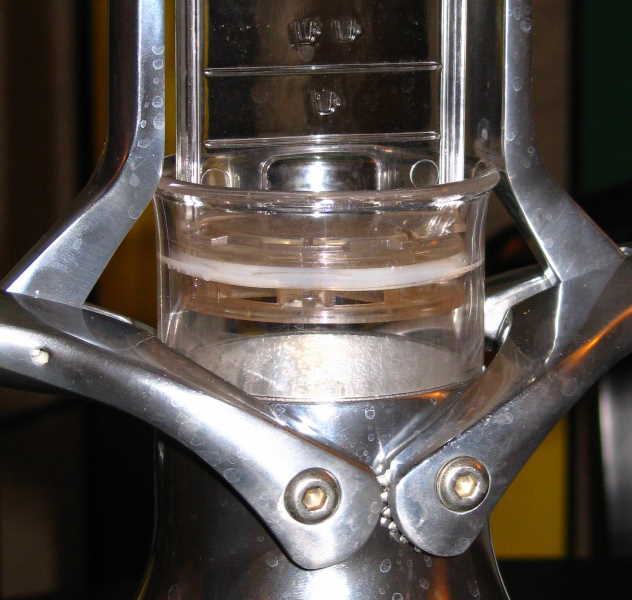 - the piston and cylinder are a hard plastic. Not fancy, but it retains some of the heat which would otherwise be sucked out by the aluminum body. Nevertheless, really hot shots require some gyrations (see below)
- even a tamper that fits, albeit it's the body of the coffee scoop as well.

It's no wonder that All-Clad decided to carry it and give it their lifetime warranty. From the standpoint of nothing in it that can break, this is a good design.

A few blank shots of boiling water got a TC in the PF up to 90C. So temperature would not be a problem. What about pressure? Not having a gauge that would fit it, I tried to measure it some way else. I fitted saran wrap around my Tea's PF, blocking the flow, and watched it burst as the pressure ramped up. Four plies of wrap burst at 8.5 bar. About 35 pounds of pressure on each lever-arm burst the four plies on the Presso. So, going by David Ross's adage about all the coffee sees is temperature and pressure; I figured I was good to go.

I heated the machine, put in the water, let it infuse for 10 seconds, and smoothly pressed the lever all the way down. No coffee. After a slight delay, there's a long pfffft, and a truly guiness effect shot, 100% deathly white foam, appears in the cup. The crema, if that's what it is, disappears inside three seconds flat. The liquid tastes like good strong coffee, but is missing the espresso oils.

I try it again; same result.

Not all pressure is created equal. I note the delayed pffffft. I note that when I press down, the back pressure increases slowly and smoothly. I take off the group and shower screen and look up at the bottom of the cylinder, and see what I expect -- A huge 2.5 fluid ounce gap between the piston at the bottom of its travel and the shower screen. The downstroke compresses air, not water, to the required 9 bar. But as the air forces the water through the puck, it expands and the pressure drops to near zero by the end of the flow. On pump machines there's a blip of white foam when one turns off the pump -- the entire Presso shot is like that. 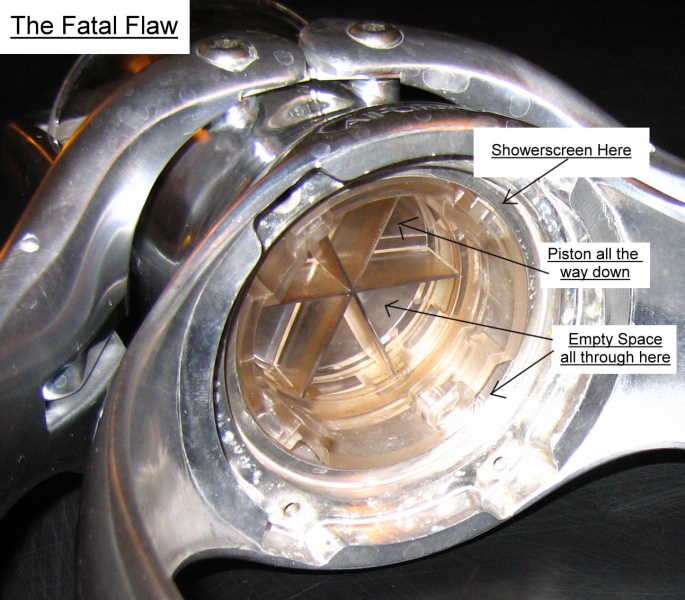 Overfilling the machine with water, so the gap disappeared, didn't help. The shot was horribly diluted. I played with partial overfills; the best I got was a millimeter thin cover of brown crema that persisted. Not good.

My Peppina is on the left, having sat about 40 seconds, the unmodded Presso on the right, about 10 seconds after the shot was done.

There was an alt.coffee thread recently calling for an industrial designer to reinvent espresso machines. The Presso is an example. Really clever, original, and low cost solutions to some basic tasks, coupled with a howler in the cylinder head that made it unusable.

So what would happen if the gap were mostly filled by some inert material? The Presso should become a real espresso machine. But it's never easy; the space was obstructed by protuberances where the plastic cylinder attached to the frame and by reinforcing struts on the inside of the hollow piston head. The inert material would have to be shaped to fit. So what about a soft plastic material that could be carved?

Hence the Teflon cyclinder from Mcmaster-Carr. BTW, who knew teflon would turn out to be about as tough to work as a hardwood? Neoprene would have been a lot easier. However, an hour of shaping work did the trick. I glued the insert into the cylinder head, and it took up about 1.5 ounces of the 2.5 ounce airgap. Would it be enough? 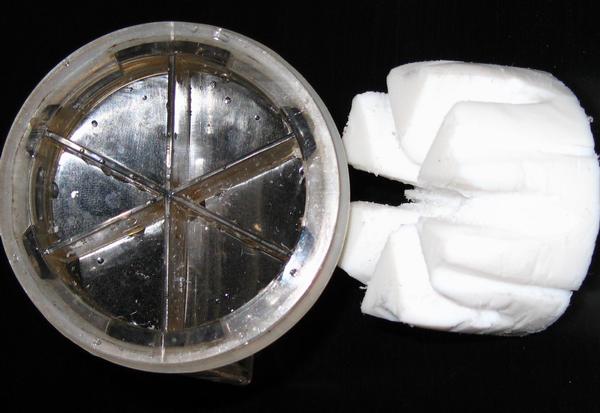 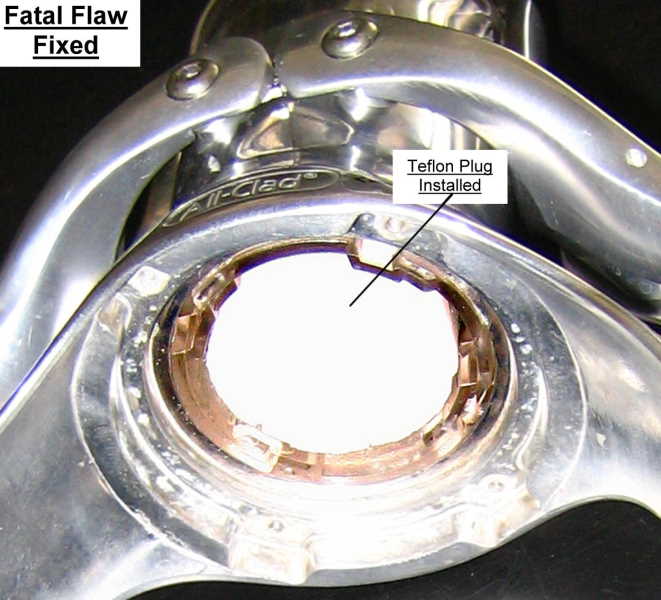 I got my answer on the first shot, a nice brown 1/2 inch persistant layer of crema, a lightish bodied, very clean tasting, undubitable espresso. We have classical lever! 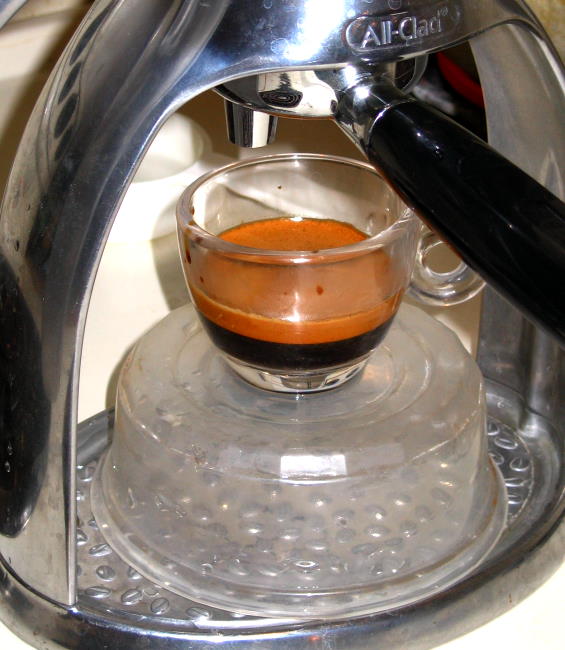 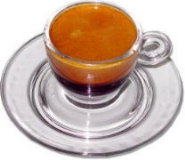 Unfortunately it was sour. Temperature control on this machine isn't impossible like on the steaming levers; but getting over 90C - 92C is tough. I finally pulled a 95C shot by boiling the water in a sauce pan, and immersing the basketless PF while dumping heating water down the cylinder. Then quickly load the pre-filled basket, lock, and make the shot. That does the trick.

Obviously, the Presso is on the far pita end of the convenience scale. But it does make shots within a hair as good as an Elektra, Pavoni, or my Peppina. A redesign, with a proper piston, and perhaps a water jacket to make heating it easier, could make it a lovely little machine.

[BTW, these aren't gamma corrected for browsers, imagine everything about 1 Fstop lighter]
Top

another_jim wrote:It's no wonder that All-Clad decided to carry it and give it their lifetime warranty. From the standpoint of nothing in it that can break, this is a good design. 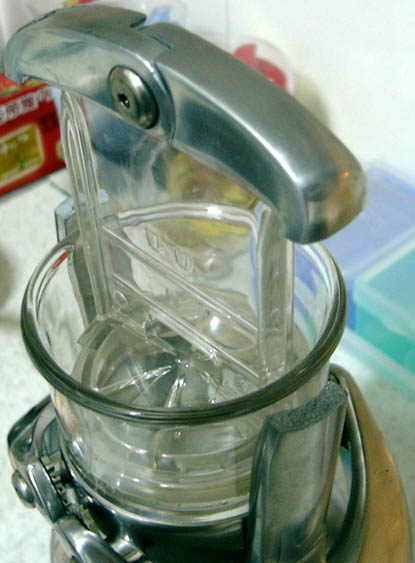 You've been perfecting your technique for a long time...... So have I.
Top

Both arms? Wow! Could it have been a manufacturing flaw? I would have expected the weakest link to be the plastic piston where the screw attaches.
Top

If anyone cares, these are selling at Homegoods (i.e. Marshalls, TJ Maxx) for $7.99 (USD). Just picked me up one, can't wait to try it.
Top
← Back •
By accessing this site, you agree to the site's terms of service. If you need help with the site, please contact us .