Yikes, it looks like you have a short-circuit through the switch when you toggle it to the left.

My main piece of advice is that after you do your wiring, before you plug in the machine, use an ohmmeter to check that there is reasonably high (or infinite) resistance from one prong of the plug to the other, no matter what the switch position. While you're at it also check the resistance between the ground prong on the plug and the other prongs. It should be infinite.

I think you would do well to restrict your diagrams to one-wire-per-switch-post. You don't want current running "past the switch" even when the switch is off.
Top

Your first diagram is a good job on explaining the rocker switch functionality. But the final complete diagram has major problems. As drawn it looks like the element would be full on when you plugged it in irrespective of switch and pStat and worse, looks like a dead short in those connections from the element terminals and the light.

Here's a crude but I believe correct diagram for what you want to do here: 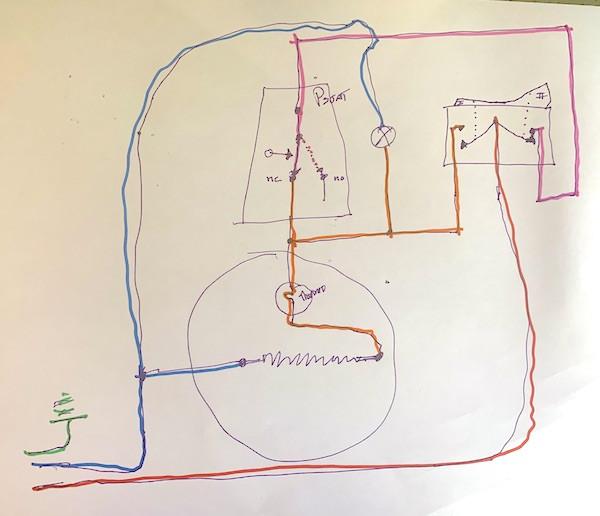 First off, on this one the red wire (at the bottom) would be the hot wire and not the neutral from the cord. That's a minor thing but good practice when you do have a polarized plug (as yours does). It just makes the machine a little more fail safe if you run hot rather than neutral through a single pole power switch.

When the switch is in the II position the orange wire is hot irrespective of whether the pStat is open or closed. The machine will heat at full power with the temp and pressure limited only by the pressure release valve.

The pilot light here is wired in parallel to the element power, so it is lit whenever the element is energized and goes out when the machine is on I and the pStat opens. Works like the green light on a modern europiccola ; it shows when the heater is on.

The original '74 had a clever way to make this light work so that it was lit whenever the switch was on. It used the two elements to make that work and so can't be done the same way with a single element. See 1974 La Pavoni Europiccola 3 position switch wiring? and La Pavoni Europiccola 2nd gen wiring experts needed for a diagram and some discussion.

Making yours work that way (lamp always lit when switch is on) would not be straightforward. It could be done if your pStat has both a normally open (NO) and a normally closed (NC) connector. But many pStats only have the one NC connector. I *think* it could be also be rigged up with a couple resistors at the lamp and the advice of an EE. (Many switches have an illumination lamp integrated into the switch so they don't have this issue.)
Pat
nínádiishʼnahgo gohwééh náshdlį́į́h
Top

Thanks to both Armindillo and Pat for taking the time to respond. Thanks also for pointing out the flaws! I definitely want to make sure this actually works and doesn't pose any risk here.

@Pat, thank you so much for the diagram! That is incredibly helpful. I understand the limitations with the pilot light and I think it only being ignited when the element is energized.
One question on your diagram: You've indicated that the blue wire and the orange wire connect at the circle with the X. Is this meant to represent the lamp? If so, how do you recommend I connect the two wires? The lamp has two prongs, which don't have any conductivity between them. In this case, both the blue and the orange would need to be wired to the same post. Is that going to cause an issue?

Aside from that question, I think what you posted is a really good solution to my issue.
Top

ben0 wrote:One question on your diagram: You've indicated that the blue wire and the orange wire connect at the circle with the X. Is this meant to represent the lamp? If so, how do you recommend I connect the two wires? The lamp has two prongs, which don't have any conductivity between them. In this case, both the blue and the orange would need to be wired to the same post. Is that going to cause an issue?

Yes, that represents the lamp. It has two connections and each of the two wires connect to a different prong. (If you were to connect the blue and the orange to the same post you would have a dead short -- fireworks!)

You don't see conductivity across a lamp like this with a meter because it's a neon lamp and not a typical resistive load -- it has a gas gap between the two terminals that lights and conducts a tiny current only when it has a high enough potential (voltage) across it.
Pat
nínádiishʼnahgo gohwééh náshdlį́į́h
Top

Pat, again, thank you so much! I'm still working on sourcing a washer or two for the pressure release spring, but hopefully I can get this all wired up safely and start to use her! Thanks for that insight on the lamp. I'm feeling much better about this project now.
Top

Hi everyone, I'm pleased to say that, with the help of this community, I have a functioning La Pavoni! Unfortunately, I have some moisture escaping from the pressurestat pipe near where it inserts into the HE, so I will need to replace that part. Other than that, I am very happy with the machine and looking forward to getting more comfortable operating it. It seems like the water really rushes out of the group at a high rate, but I'm not sure how quickly it ought to be coming out. Does anyone know of a video I could look at to compare my flow rate?

Thanks again for all the help!
Top
← Back •
By accessing this site, you agree to the site's terms of service. If you need help with the site, please contact us.